Great weight is placed upon words in NieR, and rightly so; the words that make up its compelling story are perfectly chosen in an amazing localization. 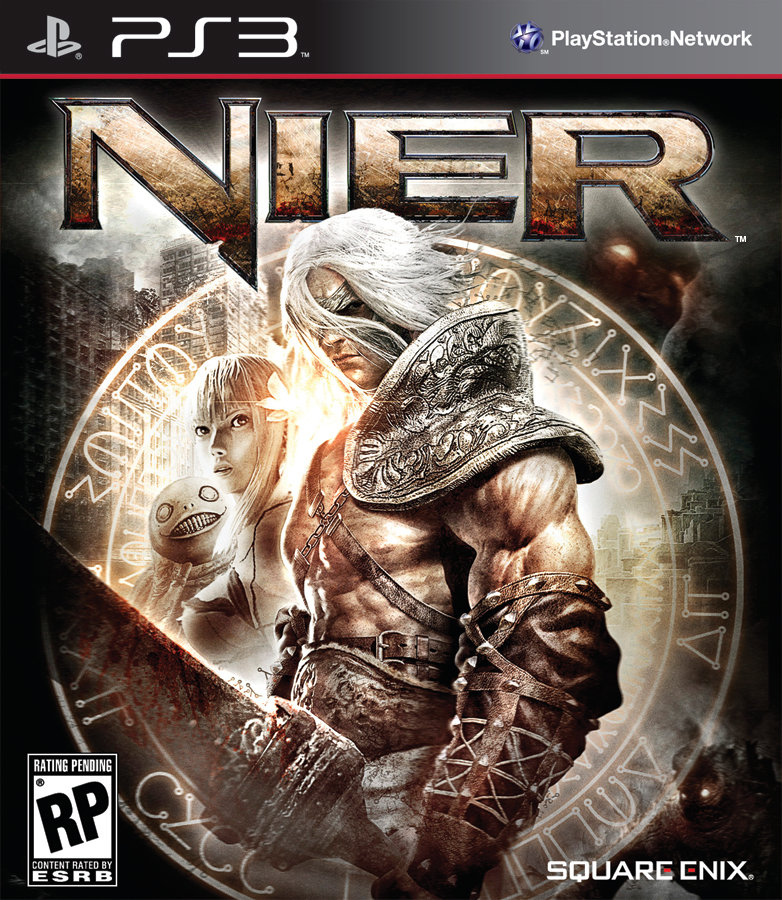 Some art feeds the intellect; some, the soul – both are to be cherished equally. Nier is largely among the latter, and every facet of this scintillating gem gives it an air of novelty and melancholy enchantment. Its brilliance is not even beneath its rough edges and shortcomings, but above, which makes its tepid critical reception even more beguiling and shameful. Here is a game that has made me feel in ways that few games can, a game to remain in my thoughts long after the conclusion. In fact, it is the sort of journey the meaning of which is not apparent until it is finished and you are home again.

Oddly for a Square Enix-published game, Nier seems to have suffered from a regrettably meager budget. Visually, the game seems nearly as ancient as its setting at times. Those few vistas and set pieces where the graphics do shine are often made less spectacular by incongruously bland textures or a lack of detail and sheen. Inconsistencies develop. Furthermore, the action occurs in a relatively limited world. Consequently, areas are repeated liberally. Other touches, such as sporadic voice acting and the brevity of the adventure, also hint at an impoverished developer. Considering the undoubtedly grotesque sum of money given to this year’s most garish RPG – Final Fantasy XIII – this is quite the transgression.

The abovementioned shortcomings may be partially at fault for Nier’s critical flop, but the lack of innovative gameplay has been frequently cited as the largest barrier to enjoyment for those who fail to appreciate the game. Nier combines basic action combat with RPG trappings: levels, statistics, upgradeable weapons, and a system for modifying weapons and magic. The combat may be derivative, but it’s fast, bloody, and consistently fun. Occasionally sloppy controls create some frustration on the battlefield, but overall, the sword-and-magic-swinging action offers plenty of entertainment with some intense moments reserved mostly for epic and excellently-designed boss fights.

As previously mentioned, Nier brings forth an absolutely novel experience, one that feels different at every turn, special in some almost imperceptible way. Every facet brings forth this atmosphere, and it begins with the gameplay. Along with the standard third-person action combat, Nier incorporates various other genres into the mix, blended seamlessly into the rest of the experience. Side-scrolling, puzzle, survival horror, and even shoot ’em up portions make their way into the game. While these segments aren’t as polished as they might be in a full game of the respective genre – and most are quite brief – they add something intangible to Nier. This helps upset the typical town-dungeon-town pacing as well. All a part of that enigmatic and enthralling atmosphere unique to Nier.

Continuing that tradition, although the graphics are unremarkable, the art design contributes to Nier’s otherworldliness. The graphical style and art creates a place neither entirely Eastern nor entirely Western. The world is small, but special, rendered in a melancholy color pallet. Each locale seems a mystery, with something sinister or beautiful just below the surface. Character designs move beyond the standard, and monsters and magic are carefully and thoughtfully drawn.

Contributing so much to Nier’s affecting and captivating vision is its soundtrack, one of the best in video game history. Almost every track on Nier’s soundtrack uses vocals. Indecipherable words, ethereal arias, and enigmatic lyrical songs are now fantasy staples rendered impotent by overuse and a general decrease in quality, but Nier’s soundtrack does not suffer from these issues. The music is done so well and so completely – it is a means and an end in itself – that Nier wouldn’t be Nier without it. I have never heard a more singular and resonant vision for a video game soundtrack. I have purchased about five video games OSTs in my life. Nier’s is among them.

All of this praise ignores what may be the most intriguing and special aspect of Nier: its narrative. Great weight is placed upon words in Nier, and rightly so; the words that make up its compelling story are perfectly chosen in an amazing localization. The premise immediately shakes JRPG conventions. The protagonist (technically named Nier, although there is no default name and players must make that choice) is a dedicated father trying to cure his daughter of a startling disease, The Black Scrawl, which causes writhing black letters to appear on its victims. The story becomes much more complex – in fact, it is never simple – without falling into that spiral of madness and floating castles and world-saving nonsense that most JRPGs inevitably fall into before they end.

Nier’s conservative cast of characters no doubt contributes to the effectiveness of the story. By conservative, I mean that there are very few important characters and even fewer that fight alongside the protagonist. Each one, however, is a unique and carefully-crafted creation. The relationships between these central characters spill over onto the player as the game matures, and this game may coax a tear or two from the player by the end. Emotions run thick here, but the game never takes itself too seriously. There are moments of playful banter that are just as important in creating bonds as the tearful moments. Fortunately, neither is corny or maudlin due to excellent performances by the voice actors. Moments that would have been laughable in other RPGs are made precious by convincing voice acting. In the end, the plot may not be perfect, but the atmosphere, the melancholy, the strange friendships, and the oddly affecting moments create an unforgettable experience.

Among Nier’s multiple themes – the power and mystery of words, bodies and souls – I found the nature of the bond between father and daughter most effective and rewarding. No other game has made me feel like a real father. Nier begins with a father going about his daily routine of caring for his ill daughter in a moribund world and ends with the extent of his love for her, how far and hard he will strive to keep her safe. There are other aspects of the story and characters to explore, and multiple endings reveal more. It’s too bad the Grimoire Nier book published in Japan hasn’t made its way here (though there is a fan translation) to illuminate more of this uniquely Japanese creation, and I mean that as a genuine compliment.

I have damned other RPGs for mistakes Nier makes. On one hand, Nier almost makes for a very average game because of mediocre gameplay and a rough presentation. But its sins are burnt away in the brilliance of its shining achievements: real emotion, an amazing soundtrack, and an atmosphere and experience unique to the end despite derivative gameplay. Nier is something to be experienced, not read about, and this paltry review does little to explain the game’s constant sense of being different. Video games tend to leave the recesses of my mind quickly after concluding. It’s been several days, and Nier still has a place there. I imagine it will remain there in the weeks to come.