Fists of Fury: Organized Crime and Futility in Yakuza Kiwami 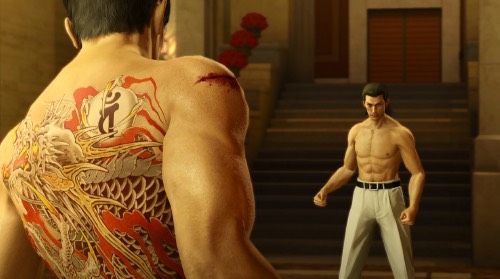 Yakuza Kiwami’s gameplay is built on power, even at the expense of reality. Whether that’s the duck and recovery present in Call of Duty’s multiplayer or Link experiencing a momentary stun after a bomb to the face in The Legend of Zelda, videogames have always struggled with depicting violence’s impact. Kazuma Kiryu, our protagonist, is able to shrug off bullets with a drink of mysterious properties or quickly heal knife wounds with a short sushi break in the heat of battle. Hundreds — possibly thousands — of enemies are felled by Kiryu’s fists alone, and this persistent loop can grant the player a sense of superiority over our character’s adversaries. And yet, Yakuza Kiwami’s greatest trick, it’s surest suspension of disbelief, lies in shrinking our outsized characters to the microscopic levels of their true existence.

“What happens when an entire ideology founded on interpersonal violence gasps for air in this suffocating, new world?”

This is done through some existential noodling, which the player can choose to engage with or avoid reflecting on completely. Though I’d argue the latter is far more satisfying, the basic story is worthy of attention in any context. Yakuza Kiwami is set in 2005, as Kiryu is taking his first steps of freedom after ten years of incarceration. Not one day passes and we learn that his organization, The Tojo Clan, have found themselves in a bind. The patriarchs are up in arms after 10 billion yen was recently stolen from them and are hatching numerous plots in an effort to assert dominance and reclaim this blood money, all means justified. With 10 billion yen being equal to about $90 million US dollars, this is a massive sum, to be certain.

But let’s put this in perspective: $90 million is just a touch more than the money it took CD Projekt Red to develop and market The Witcher 3 in 2015 (approximately $87 million, adjusted). Blackrock, the world’s largest investment corporation, controlled $7.4 trillion worth of assets as of the end of 2019, a staggering hoard of wealth that many of us would find incomprehensible. In other words, the amount that The Tojo Clan lost, which leads to levels of violence not seen in the streets of Yakuza’s Kamurocho in decades, is about 1/82,222th of the wealth controlled by one single corporation. On this reflection, a thesis formed on the brutality present in Yakuza and other media centering on organized crime.

I begin to find the passion that propels every stratospheric punch, every earth-shattering kick becomes… pitiful. The many boss battles that Kiryu stumbles into continue in their attempt to thrill and draw forth extreme emotions from the player, frequently to perfectly melodramatic effect. But observed from some distance, this is not the might of two Herculean monoliths slamming into each other in a fight for the fate of the world. This is just two men, decades of scars between them, gray hairs forming at the temples. Here, 60 years removed from the genesis of nuclear weaponry, are two men who mistakenly believe that the extensions of their bodies are enough to rip and tear time and space from their predestined paths.

In turn, they are attempting to push back against an obsolescence which has already come to devour them. What happens when an entire ideology founded on interpersonal violence gasps for air in this suffocating, new world? What more can be said of fighting for microcosmic street blocks within the belly of a global capitalist structure many thousands of times greater than Kamurocho?

Pure futility. Not only is this not the world for Kiryu and the yakuza, it hasn’t been for a long time and it never will be again. Even at the heights of the Japanese economic boom of the late 1980s, the fantasy of the yakuza calling was only delaying the inevitable. This is what organized crime has become across the world. Broken men unable to accept how far lost they are to time, and those unwilling to move on must be left to the dust. And whether they choose to break from this anachronistic life of violence or continue to scurry about its depths is their choice alone.

This is what makes the ending of Yakuza Kiwami seem pedestrian at first, but entirely beautiful upon closer inspection. The 10 billion is exploded by a bomb, and notes fly through the streets of Kamurocho indiscriminately. Those who refused the progress of their world are dead. Kiryu resigns the new duty thrust upon him as head of The Tojo Clan, to walk down the street with his adopted daughter Haruka, stepping into the dawn of a new chapter for them both. It’s dripping with sap, but intimate and touching all the same.

Knowing that there are five more games in the series that follow Yakuza Kiwami chronologically, it is sad to know that Kiryu will likely fall into the fold of the fossilized men again. But for one brief moment, we view a path where Kiryu can leave behind his intoxicating delusions of violent domination, to walk the road he had spit on for his entire life.