Story of Seasons: Friends of Mineral Town Preview: Back to the Basics 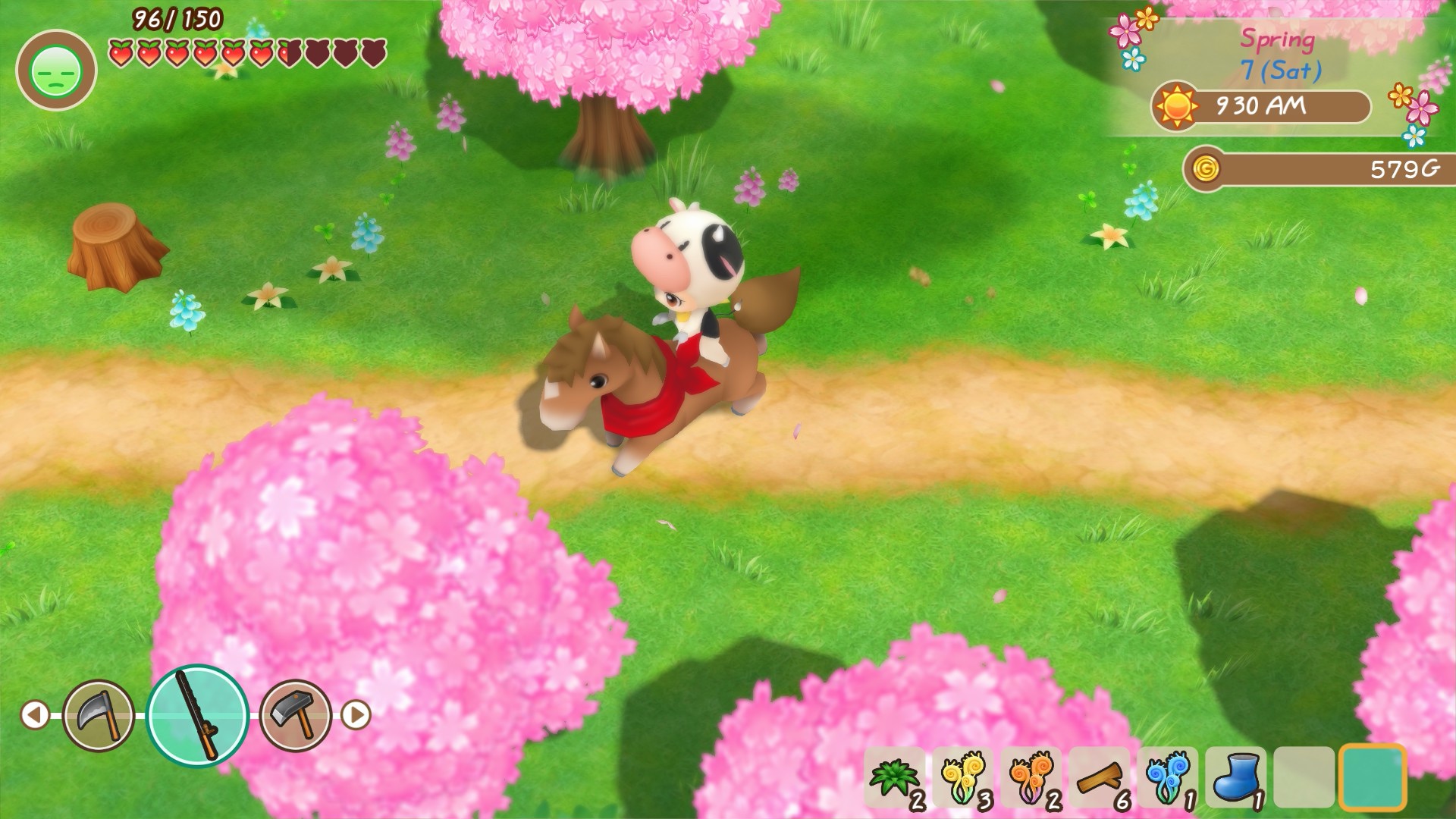 Players get a taste of the title’s modernity from the very start, as you have a choice not only between a boy or girl character, but between two different appearances—either the classic farmer from the original games or a more urban look. There is also the option to pick between three different skin tones. The only things really set in stone are your eyes and hair, but you are free to change between a variety of overalls and hoodies at your leisure through your home’s mirror. Players can also pick between two difficulty settings. Normal mode has the player start with 500G in their pocket and nothing more, while Simple mode makes easing into the game a bit more straightforward—you have 2500G, nine turnips ready to harvest and ship, nine more planted, and you earn a bit more money from your shipments and more friendship points when giving gifts to the townsfolk.

The rest of the game’s contemporary sheen comes from spruced-up character designs; the gameplay, however, is inherently classic. Like other Story of Seasons games, players maintain a farm—growing crops, raising livestock, and shipping items to earn money—and a social life—attending seasonal events, conversing with the townsfolk, and even developing a relationship through gift giving and dialogue events. But rather than hold the player’s hand and provide them with all the basics, the game leaves it up to the player to take the initiative and get on their feet. While you start with the most basic tools for clearing your field, you don’t have any of the tools needed to care for animals—or any animals to care for. You don’t even start out with a pet like in the original games. Instead, you need to save up money to buy your livestock and collect tools like your handy shears, milker, and brush. Even playing on Simple mode, I found myself carefully budgeting my earnings to ensure I progressed at a steady rate. Between saving for new animals, upgrading your tools and home, and adding more space to your backpack, every achievement feels earned and adds a meaningful layer to your budding farm life.

The Nature Sprites are another great example of a feature that isn’t pushed upon the player but is very beneficial to invest in. These tiny elf-like creatures are out of the way, living in a hut behind the church. But once you’ve built up their friendship enough, they are willing to play mini-games with you and help around on your farm. There are three different mini-games, one for each activity the Sprites can help you with: watering crops is a memory game, harvesting crops is a red-light-green-light kind of button masher, and caring for livestock is a high-octane rush to keep some chickens well fed without going overboard. These games are simple to learn, offer sufficient wiggle room for mistakes, and increase in difficulty as you succeed at them. The more you play these games, the better the individual Sprite gets at the task, and you can ask them to help for multiple days at a time. This is especially valuable early on, when daily errands such as watering crops can take a long time and consume a lot of stamina.

You’ll also frequently find yourself at the mine, where you can uncover various ores used to upgrade your tools, as well as a whole slew of other benefits. Extra ores can be sold for more money or given as gifts to the locals. You use your hammer to mine the rocks and your hoe to till the ground and find the ladder to the next floor down. This extensive use will level up your tools, which is a necessary component of upgrading them. You may even find hidden money as you till. This makes the mine a great asset in your farm life, especially early on. Time doesn’t flow when you’re in the mine, either, so the only concern is maintaining your stamina. The conveniently placed hotsprings right outside rejuvenates your lost stamina based on how long you spend in it, so it’s up to you to determine how much the time trade-off is worth when spending long stretches in the mine.

Making good use of early resources—namely, the mine and the Nature Sprites—allows players to devote more time to befriending the townsfolk and potentially building a relationship with one of them. The complexities of more recent Story of Seasons titles, such as farm layout customization, are completely absent from this remake. What remains is a very classic approach to the beloved farming and life simulation series. Players will face a cleverly challenging game and be rewarded for effective time, stamina, social, and money management, giving them more opportunities to explore and bring the world of Mineral Town to life. Prospective farmers who want to take a trip down memory lane or visit Mineral Town for the first time can pre-purchase Story of Seasons: Friends of Mineral Town for Nintendo Switch or Steam, and the game launches on July 10 in Europe/Australia and July 14 in North America.