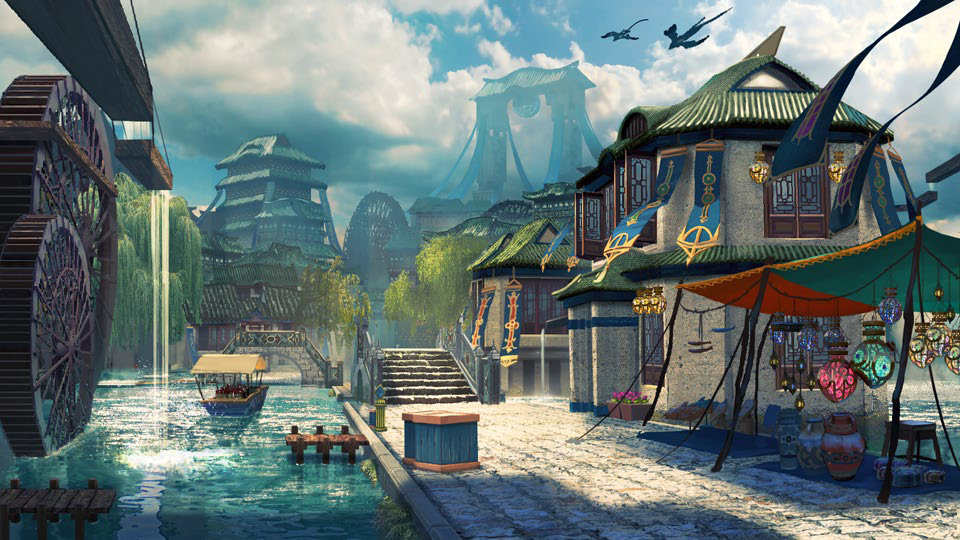 Following multiple teasers by Suikoden I and II scenario writer Yoshitaka Murayama, Rabbit & Bear Studios has revealed Eiyuden Chronicle: Hundred Heroes, seemingly giving fans exactly what they had hoped, in what looks like a proper Suikoden successor. The game is meant to be an homage to PSone-era RPGs, and as you can see in images, borrows from Octopath Traveler‘s HD-2D visual style to feel both nostalgic and fresh at the same time.

Following in the footsteps of legendary developers like Koji Igarashi took with Bloodstained, Eiyuden Chronicle: Hundred Heroes will be crowdfunded, with a Kickstarter campaign launching on July 27th. The modest $500,000 goal will help make a PC release a reality, and a stretch goal will be available for all consoles – PlayStation 5, Switch, and Xbox Series X specifically.

Thanks to a post by our friends at RPGamer, we know the team behind Eiyuden Chronicle: Hundred Heroes, and for fans of PSone-era RPGs, it’s a list of names to get excited about:

Naruke and Sakuraba together? Be still my musical heart. As Gematsu points out, this is the first time several of these creators have worked together.

Rabbit & Bear released a lengthy overview of the project, including this story summary:

Welcome to the Continent of Allraan

“Our story begins in one corner of Allraan, a tapestry of nations with diverse cultures and values.

By dint of sword, and by way of magical objects known as “rune-lenses,” the land’s history has been shaped by the alliances and aggressions of the humans, beastmen, elves, and desert people who live there.

The Galdean Empire has edged out other nations and discovered a technology that amplifies the rune-lenses’ magic. Now, the Empire is scouring the continent for an artefact that will expand their power even further.

It is on one such expedition that Seign Kesling, a young and gifted imperial officer, and Nowa, a boy from a remote village, meet each other and become friends.

However, a twist of fate will soon drag them into the fires of war, and force them both to reexamine everything they believe to be right and true.”

We also have bios for several of the game’s 100 characters:

Sex: Male
Age: 17 years old
Home: A remote village in the League of Nations
Favorite Food: Anything with meat in it

“That’s who I am. A meddler. Always will be—just ask Leene. So don’t tell me to do nothing. I may not be able to help them, but I have to at least try.”

When the League of Nations recruits warriors to assist in a joint expedition with the Galdean Empire, our protagonist answers the call and leaves his remote village to test his skills. On the mission, he finds an ancient rune-lens, unaware that the discovery will spark a war between the League and the Empire. After the conflict begins, he joins a unit in the League’s border guard.

The protagonist is the “leap before you look” type. He doesn’t always weigh the pros and cons before springing to action, and while his constant need to involve himself in other people’s problems sometimes creates headaches for his companions, they like him for it and know his heart is in the right place. After all, if they ever got into trouble, he’d be the first person there.

“I can dream all I want, but it won’t change a thing. The world is not that kind. So if the only way to achieve my ideals is to betray them first, then I will do that—unflinchingly. You have my word.”

The second-born son to House Kesling, a powerful imperial family. His older brother died on the battlefield. Seign is exceptionally gifted; after achieving outstanding grades at military academy, he was placed in command of a company of his peers and sent on the expedition to find the ancient rune-lens. During the mission, he meets the protagonist. The two warm to each other as they overcome adversity, and they learn of one another’s ambitions.

Seign’s strategic mind allows him to analyze things from a broad perspective and make sound decisions. People often confuse his clear mind for a cold heart, but he is guided by strong ideals and a deep passion to fulfill them.

After his brother’s death during a border rebellion, Seign began to think long and hard about what it means to fight.

Sex: Female
Age: 16 years old
Profession: One of the Guardians who watches over the forest
Favorite Food: Herbed chicken

“You just leave the forest to me. I know where the water springs, where the rabbits burrow—and most importantly, where your enemies will try to hide.”

A young member of the Guardians, a clan that hallows and protects the forest. Since Marisa was very little, her family has instilled their ways and traditions in her. She has a warm, affable smile—except on the battlefield, where she wears the countenance of a warrior.

Although the Guardians live as one with the forest, they have respect for the outside world’s culture and technology, and they are not against integrating the parts of it that make sense to them. Marisa is particularly forward-thinking in this regard, and loves new things—especially cute things.

Over the generations, the Guardians have developed a unique method of wielding the rune-lenses. For that reason, both the Empire and the protagonist try to win them over to their camp. Whom the Guardians choose will prove to be a major turning point in history.

“You should lay down arms and surrender. That’s the quickest way to end this… No? Very well. Then I suppose I’ll provide you with the next best thing: a winning strategy.”

A young scholar who specializes in natural history. He yearns to know of every last thing in the world, and exactly how it got there. He also happens to be a genius tactician, and will be a valuable asset to the protagonist.

That said, he views warfare as the most pointless of all human endeavors, and any personal contributions to it as a complete waste of time.

“Only a soft-brained leader runs headlong into danger. Anyone who knows what’s good for him will tell you you’ve lost it, kid. But not me. If blaze-of-glory’s your thing, count me in. We all die in the end. Might as well make it interesting.”

A veteran beastman warrior. He and his clan make their living as mercenaries, and their vast experience and sheer brutality put them in high demand. War is all Garr has known, and to him life is one battlefield after the other until you die.

When a conflict breaks out, every army wants as many beastmen as they can afford. Because mercenary contracts are made with individuals and not the entire clan, it is not uncommon for Garr and his fellow beastmen to face each other as enemies in the field.

“Uhh, maybe I’m dumbing this down a little, but—like—if a bunch of arrogant swine strut into YOUR home and started acting like they owned the place, what would YOU do? ‘Cause there’s your answer.”

After the Empire’s forces invade League lands, Lian is infuriated and runs away from home…without even the slightest semblance of a plan. She decides the first thing to do is hoof it to the biggest town she can find, and luckily that’s where she meets the protagonist and his companions.

Lian was born in a dojo, and her father wasted no time in teaching her. She was doing roundhouse kicks before she even learned to walk properly.

“The road you walk is one, and yet its endpoints are myriad. You can still choose where the road takes you.”

A swordswoman who is journeying to perfect the way of the blade. She has a stoic personality and rarely speaks, unless it’s to challenge someone she views as a worthy opponent.

When she does open her mouth to say something, it’s straight to the point and usually dripping with wisdom, so the people around her have taken to calling her “sensei.” However, even the greatest of senseis do have the occasional brain fart…

Here is another batch of screenshots, plus some great artwork and the game logo:

Finally, thanks to IGN, we have a brief look at the game in action:

Again, the Kickstarter for Eiyuden Chronicle: Hundred Heroes is launching on July 27th, so we’ll keep an eye on the game and how many minutes it takes to reach its goal.