Posted by Peter Triezenberg on September 7, 2020 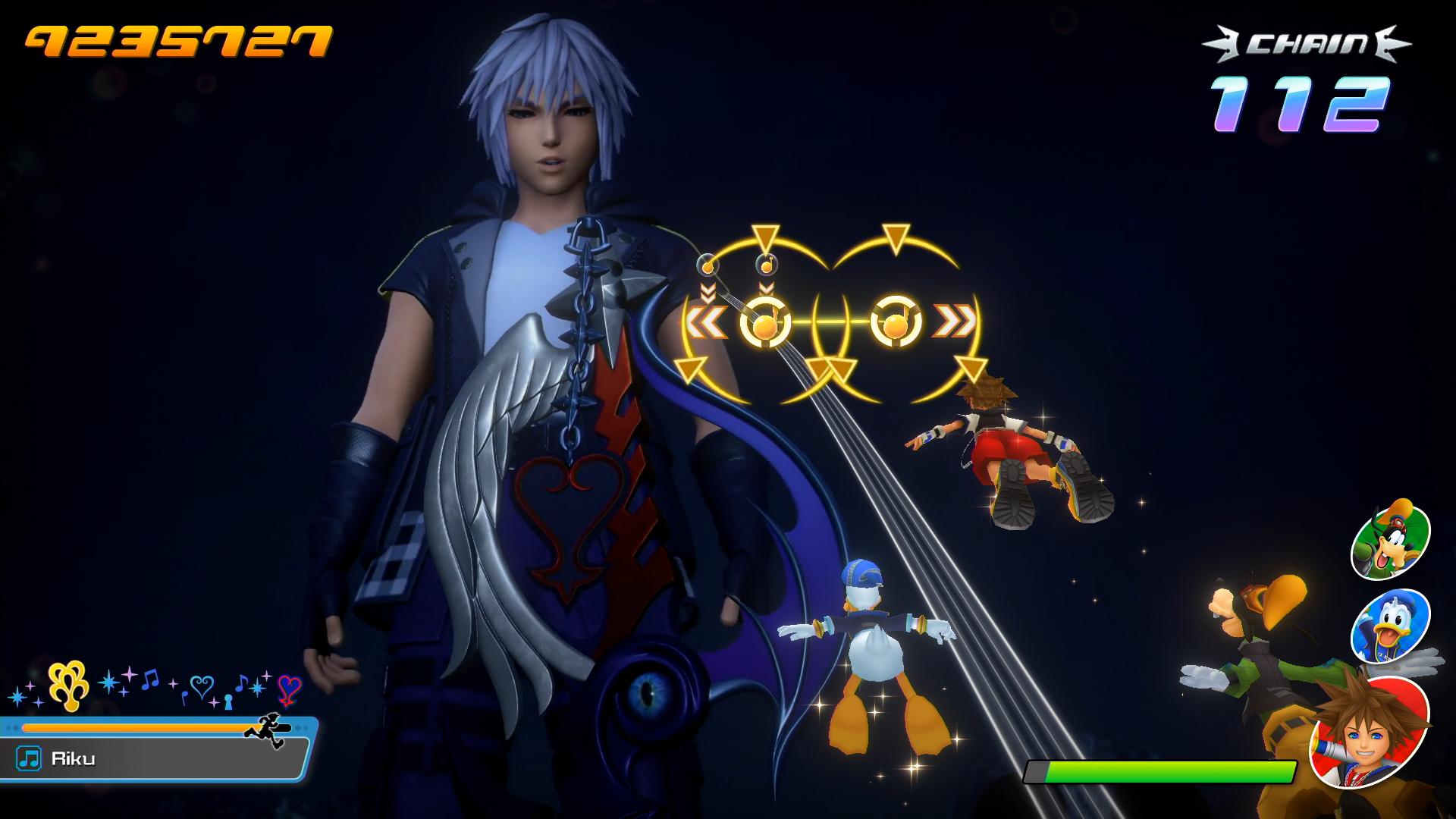 Kingdom Hearts Melody of Memory is the Kingdom Hearts series’ first foray into the rhythm game genre: which is surprising, given the series’ robust assortment of original tunes and remixes from classic Disney films and Square properties. Fortunately, Melody of Memory is looking to be quite the auspicious debut, as Square Enix has released new details on the game’s myriad systems, as well as accompanying screenshots and artwork.

A world of memories guided by the power of music. The player visits each world by Gummi Ship and melody. Collect the “Rhythm” in each world while looking back at memories. The mysterious power woven by the melody creates memories, and memories become the world and bring back to life the adventures that have occurred thus far.

The game features several groups of characters from across the Kingdom Hearts series. The “original” party of Sora, Donald, and Goofy is available from the start, but more will become available as the player progresses. One such group is the “Days” party, consisting of Roxas, Xion, and Axel.

In Kingdom Hearts Melody of Memory, players will attempt to match the timing of oncoming enemies and musical notes with button presses, with their timing being rated with “Excellent,” “Good,” or “Miss” scores. Should players miss a note, their HP will deplete: once it hits 0, it’s game over. The player can choose from several control styles, including one that only requires a single button, as well as one with more complicated button imputs for those seeking additional challenge.

Additionally, each song can be played on one of three difficulty settings: “Beginner,” “Normal,” and “Proud.” Can I see people attempting the kind of insane challenge runs people do in the other Kingdom Hearts games? Time will tell.

In World Tour mode, you’ll visit different worlds and experience the memories therein to unlock new songs and cutscenes. Once a song is unlocked, it can be played whenever you’d like in Music Select mode, and any unlocked cutscenes can be viewed in the Museum. The Museum also has a Jukebox mode so that you can just enjoy your favorite Kingdom Hearts tunes.

There are several different gameplay styles in Kingdom Hearts Melody of Memory. The most basic is Field Battle, where players run along the lines of the musical notation and defeat oncoming enemies. Meanwhile, Memory Dive mode plays a scene from one of the Kingdom Hearts games and has players match their imputs in time to the music. There are also boss battles (yes, really) where the player is tasked with defeating a strong enemy, avoiding their special attacks by landing special imputs covered in dark auras.

Kingdom Hearts Melody of Memory wouldn’t be a proper rhythm game without multiplayer! In Online Versus, players can take to the Internet and engage in friendly competition with other players. Additionally, if you’re playing the game on Switch, you’l have access to an exclusive Friend Versus mode you can do locally. You’ll be able to bedazzle and bamboozle your opponents with special “tricks” in competitive multiplayer, such as switching your HP or hiding the omcoming rhythm notes. The Switch also has an exclusive eight-player Battle Royale mode: it’s a no-holds-barred, winner-take-all approach to rhythm gaming where too many missed notes will force players to drop out until only one victor remains. May the odds be ever in your favor?

Players can also engage with the computer in COM Versus mode, increasing their rank with each set of three victories against five different parties. There’s also Double Play, where one player takes control of Sora and the other takes control of Riku, with the teammates attempting to stay in sync and nab a high score.

Finally, here are some more of the tracks being included in Melody of Memory! This is not a complete setlist, but it’s nice to see the variety on display.

Kingdom Hearts Melody of Memory will launch for PS4 and Switch on November 11th in Japan, and on November 13th in the West. Stay tuned to RPGFan for more information!