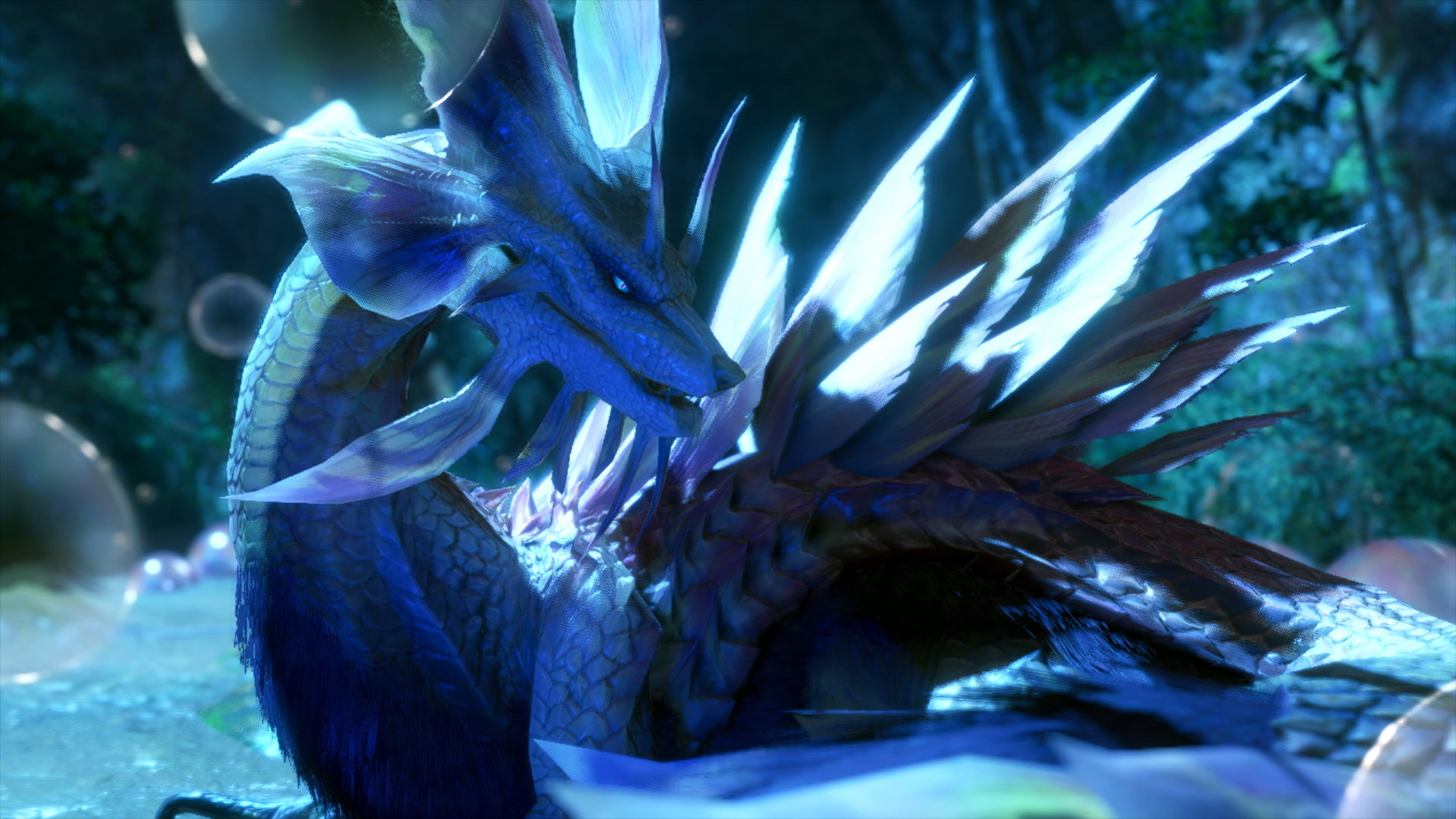 Monster Hunter is a series I’ve wanted to try for over 10 years at this point. As a teenager, I could frequently be found loitering in my local games shop, poring over the variously intimidating, grotesque, brilliant and beautiful art that lined the shelves. In particular, there was one unknown entity that captured my imagination like few others could. On the box was a fearsome, serpentine creature roaring into the distance, begging me to drop my virtual wooden bat and pick up a hardy great sword for the powerful creatures that awaited me. But unfortunately, I never took the plunge.

You see, these were dark times, and though my eyes would wander, little seemed to hold my socially reinforced gaze other than the latest sports titles. The hundreds (thousands?) of hours I’ve put into MLB: The Show account for years of my gaming life that will forever be lost to me, a sunk cost for a spent youth of mostly futile attempts to make my 6’10, off-brand Latino Randy Johnson character the most physically imposing and unlikely shortstop in the history of the sport.

Thankfully, life is long, I’m an adult, the Chicago Cubs are owned by the billionaire bankroller for a white supremacist, and I can give all the independent mind in the world to the now massively popular Monster Hunter franchise.

Monster Hunter Rise comes as part of a new era for Capcom’s multislayer RPG series. After over a decade of widespread adoration in Japan, the series finally broke wide open across the globe with 2018’s Monster Hunter: World, which sold over 16 million copies (the most of any Capcom title ever). Rise is, much like the Nintendo Switch itself, a hybrid: a combination of the old PSP and 3DS titles that made the MonHun name back in the day, but with some of the quality-of-life improvements and grandeur that made World a smash hit.

Monster Hunter Rise is a fascinating title from a technical standpoint. It is the first game on the Switch that utilizes Capcom’s latest proprietary tool, the RE Engine. This engine is simply marvelous to behold, with games such as Devil May Cry 5 and the most recent Resident Evil titles positively peacocking, featuring near-photorealistic character presentation, high frame rate combat, and even some decent VR support on PlayStation and PC. But I was curious to see how this technology would jive with Nintendo’s console/handheld straddler, and I am happy to report it works exceptionally well within the system’s limitations.

Gameplay holds to a relatively stable 30 FPS (which I find more playable than the unlocked rate seen in World). This is accomplished through the common, lower-resolution technique used in many of the Switch’s more ambitious titles. In handheld mode on a smaller screen, 540p is by no means a deal-breaker, but a docked 756p on a midsize 4K TV is not recommended. This is a handheld wonder, baby.

Monster Hunter Rise is one of the most technically impressive games I have ever seen running on the Switch. Within this small demo, players are treated to lush tropics and cascading waterfalls, as equally gorgeous in the glow of night as the harsh light of day. Rise falls somewhere between its predecessors and Breath of the Wild with its visuals; it’s bright and playful but suffused with a realism more akin to World. The player character’s animations are decently attractive and weighty, and I have particular praise for the devilishly fun switchaxe and its multimodal shenanigans. The UI elements and loading screens sing with an ukiyo-e influence not unlike Ōkami, a truly mythical Capcom classic that seems to grow more stunning with each succeeding console generation.

But the real charm here lies, of course, with the monsters. This demo allows players to explore a tiny piece of Monster Hunter Rise’s map, the Flooded Forest, with two specific targets: the mean-mugging, Gallimimus-looking Great Izuchi, and the bubbly fox Wyvern known as the Mizutsune. Other wonderful creatures can be found in this small cut of an open world, such as the bear-like Arzuros and the femme fatale herself, the Rathian. The forest is a verdant ecosystem unto itself, and its many lifeforms are anything but oblivious to the presence of their fellow inhabitants. The movement of these monsters is simply sublime, and I adored getting to test my mettle against their powerfully resistant hides and terrible, gnashing fangs. Your own navigation of this environment can be done on foot, but riding your trusty Palamute is the clear choice of the hip and fabulous (they all resemble Repede from Tales of Vesperia and yes, they are all good boys.)

The demo allows you to try out all 14 different weapon types to suit your playstyle. I started with the swift and razor-sharp dual blades to fit my dex-thief type of cross-game playstyle, but I surprisingly had the most fun with the aforementioned switchaxe. The insect glaive and longsword are also quite entertaining and make getting up close and personal with beasts the ideal strategy for maximum enjoyment. I find myself more lukewarm on the ranged options in the game, though this may be due to my own inclination towards close combat.

Though varied and at times quite immersive, these experiences overall felt a bit lacking in fluidity and depth. I’d reckon this will improve down the line as the map expands and weapon familiarity grows. These hopes also extend to Rise’s new Wirebug movement mechanic, which has, so far, felt underpowered and stiff. The potential for free-flowing, expressive combat is certainly here, but it might be held under lock and key until the springtime release date.

The newly introduced Wyvern Riding mechanic, however, is less likely to win my heart. After a monster is downed, the player can use their little Wirebugs to wrap them up and ride them like a bucking bronco. It’s a humorous little quirk in Rise’s combat scenarios, but controlling these injured foes is giving me nightmares long forgotten from the sixth and seventh generation of games, where it seemed every action title had the hero take the ol’ tank for a joyride that is anything but. There’s certainly more personality (and less machismo) in Wyvern Riding than rolling an armored vehicle across an empty desert, but I could still do without these reminders nonetheless. (If this mechanic was instead used to, say, tame the monsters for use as mounts or party mem… oh right. We’re getting Monster Hunter Stories 2 as well. *Confusingly shakes a fist while clapping*)

Overall, Monster Hunter Rise is looking to be a whale of a time. The game is keenly aware of its history and the weight of the series now being a worldwide phenomenon (a Milla Jovovich flick for Palico’s sake!). I may call it a victory lap, but Monster Hunter Rise doesn’t find satisfaction in simply kicking back and resting on the battle-worn formulas of World or its handheld antecedents. New attempts at fresh mechanics and a studied eye towards the trends of the current gaming landscape have given me much to look forward to on March 26th. While contentment may stifle inspiration for some, success has only emboldened Monster Hunter to Rise to the occasion.