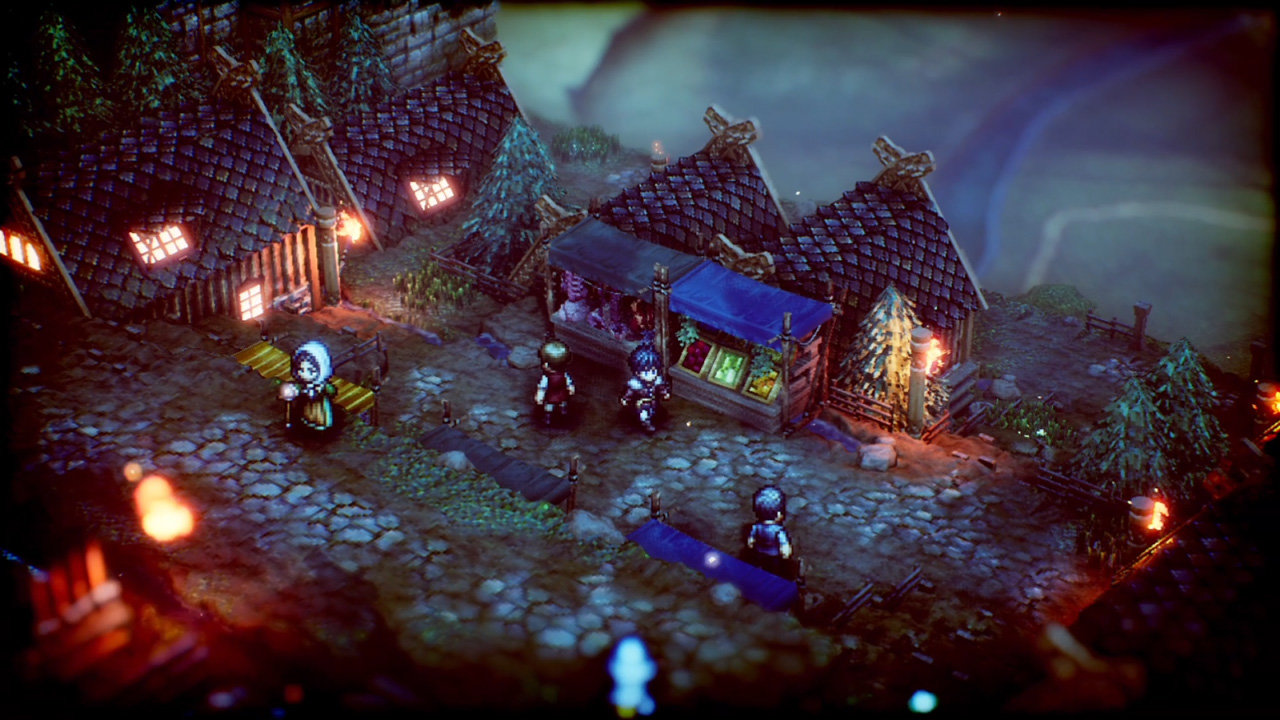 Let’s get the bad out of the way first. Project Triangle Strategy, even as a working title, is… well, it’s something.

Now on to the good. You’ll note that it takes up the remainder of this article. Project Triangle Strategy is quite clearly some form of quasi-sequel to 2018’s gorgeous and grand Octopath Traveler, a turn-based Square Enix RPG in a “HD-2D” wrapper. Why the quotation marks? Square Enix straight-up trademarked the term a couple of years back. They even have an official logo for it!

Whereas Octopath Traveler‘s battle system is a delicious throwback to older mainline Final Fantasy fare, Project Triangle Strategy, whatever it ends up being called, looks to strategy RPGs like Final Fantasy Tactics for its inspiration. Or perhaps Tactics Ogre: Let Us Cling Together is a more apt comparison; I’ll explain why in a bit.

Check. It. Out. They’re the same brilliant graphics and darling sounds as Octopath Traveler, even the same the title font, but with a more focused storyline (which even some of Octopath‘s biggest fans requested) and an isometric strategy RPG format (itself something many JRPG fans have wanted to see Square Enix dabble in with this new engine). Unless you’re not into the strategy RPG scene at all, I’d have a hard time imagining you feeling disappointed.

As best as I can glean from our splendid announcement trailer, the protagonist’s name is Serenoa Wolffort. He’s the heir to House Wolffort (natch) and it quickly becomes apparent a great deal is on his shoulders. The first thing we see happen to him is what appears to be his father’s death; it feels distinctly Yasumi Matsuno, and that’s not a bad thing. Serenoa’s childhood friend, Prince Roland of Glenbrook, seems to embody the principles of virtue and morality. On the other hand, Frederica Aesfrost, a princess and Serenoa’s betrothed, is passionate about the pursuit of liberty. Lastly, there’s Benedict Pascal, House Wolffort’s steward and advisor, who espouses the need for a pragmatic style of leadership.

The basic plot setup is that three nations are competing over two dwindling resources: salt and iron. The ensuing war is dubbed the “Saltiron War,” which… yeah. Checks out, at least. It looks to be a bloody affair, if a specific scene filled with screaming and a house set wildly aflame have anything to say about the final product.

As I write this, I lament that Nintendo hasn’t yet posted the full reveal segment as seen in today’s Nintendo Direct. It is there that many of Project Triangle Strategy‘s gameplay elements can be seen, from examples of those tough choices to the nifty way that casting elemental spells on the battlefield in particular orders can affect the environment. (The example we’re shown is ice magic cast upon flames, creating water which is subsequently subjected to lightning magic. Havoc ensues.)

Just because I can’t give you a trailer of the Project Triangle Strategy footage in isolation doesn’t mean you can’t catch what I’m chatting about firsthand. Skip to around 27:43 or so in the full Direct video and you’ll see what I mean!

Between follow-up attacks, the importance of elevation, clever terrain usage (watch that guy latch on to a mechanical contraption to bring himself to the top of a battlefield in a flash!) and more, the Fire Emblem meets Final Fantasy is making my heart race.

Although it’s not due until sometime in 2022, Project Triangle Strategy has a free downloadable demo on the Nintendo Switch today. This approach is something of a custom for the hard-working folks at Acquire and Silicon Studio, the developers responsible for not just Octopath Traveler but the Bravely Default franchise as well. (Speaking of which, Bravely Default II! Out next week!) Most of their games feature at least one, if not two, demos prior to launch. The first one often pops up well in advance so that the team can survey players and find out what they loved and what they were less enthusiastic about. It’s a rad thing, and it’s helped to guarantee the quality of their catalog through the years.

RPGFan is going to cover this game’s every single update or so help me, I will riot. Which is convenient, because I’ll be writing many of them to ensure that doesn’t happen. We’ll have a preview article up with our thoughts on today’s free demo ASAP, so please look forward to it!