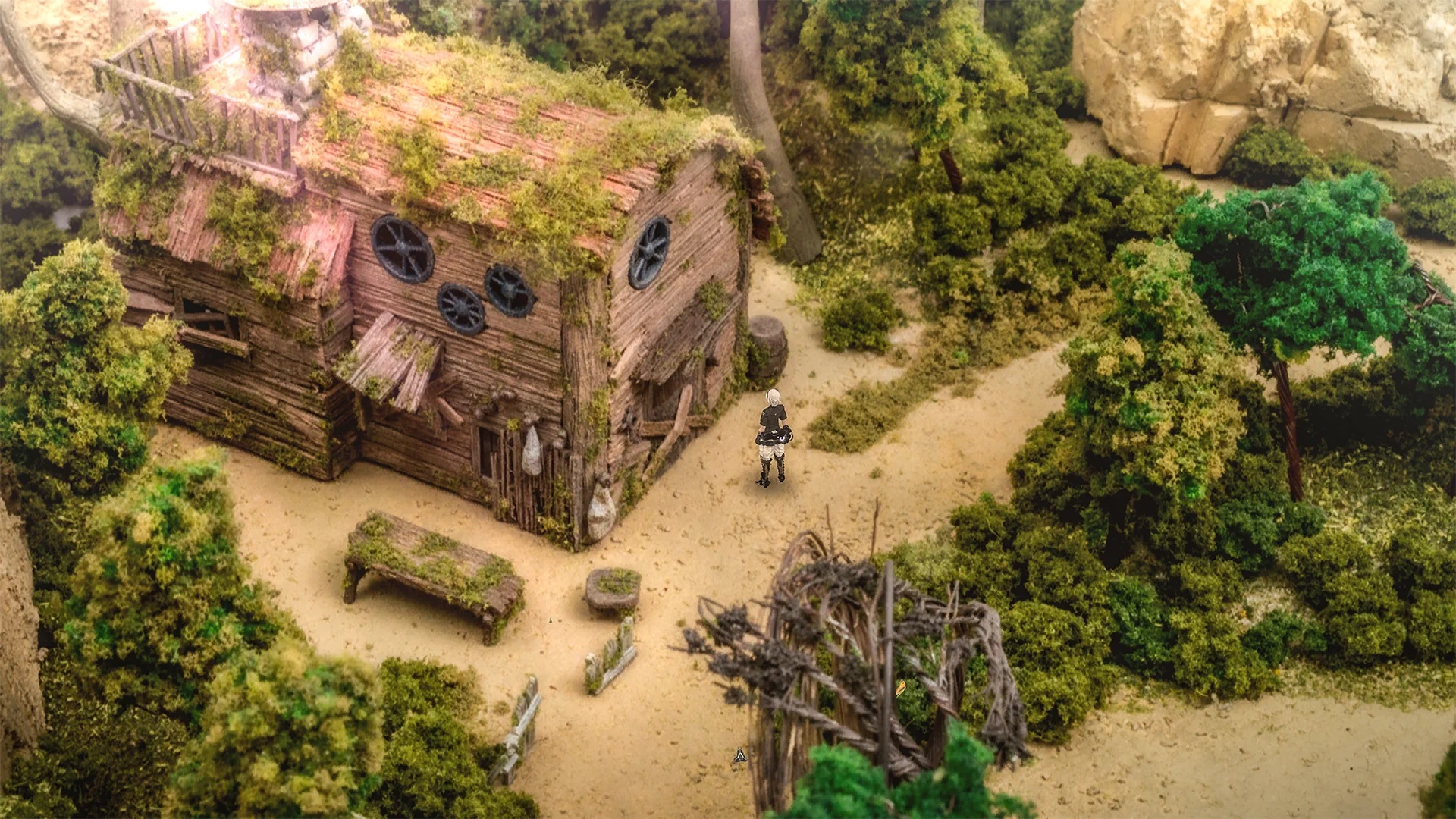 Did anything hit you hard on April Fools’ Day? Nothing got past me this time, but I saw a headline about an alleged Chrono Trigger 2 scoop and while I immediately knew it was fake, there was still a pinch of salt on the old wound. Not to be a spoilsport, but April Fools’ Day just isn’t my jam. Occasionally, something funny happens, but for the most part, it’s just a rat race to troll people with false flickers of hope that will never guide them through the dark spaces of their lives.

Whoa, that got dark. Let me dial it back, here.

RPGs! Role-playing games. Play a role — in a game! We’ve got another busy week ahead of us as we ring in the fourth month of 2021. Switch owners in particular have a lot to choose from, but it’s Apple Arcade that might just grab top honors. Surprised? Me too. Let’s mosey.

Fantasian is beautiful. Mistwalker’s latest project might well be its prettiest, but it’s also among the studio’s more elusive titles; for the time being, at least, you can’t play this game unless you’re deep into the Apple ecosystem. Fantasian is exclusive to the paid monthly service called Apple Arcade, which offers a growing list of unique games that can be enjoyed via iOS, iPadOS, macOS, and on AppleTV. The service costs $4.99, but if you own a compatible device and you’re in this just to check out the next big thing from Final Fantasy franchise creator Hironobu Sakaguchi, you can probably get through Fantasian quite comfortably within a single month. Sakaguchi came up with the idea of Fantasian after reuniting with former colleagues to replay Final Fantasy VI. As soon as I heard that, I knew I was interested, but it was the legendary creator’s claim that he wished to return to a more traditional narrative-driven JRPG experience for the first time since 2011’s The Last Story that really stuck with me. With a novel approach to graphics that is simply sublime, Fantasian utilizes handcrafted dioramas to make its environments pop in truly astounding ways.

I haven’t spoken about the game’s plot, nor its characters, mechanics, or… anything, really. Just know the following things: the realm is ruled by machines, a mechanical infection is spreading at an alarming pace, you can send enemies you’ve already fought to a separate “Dimengeon” to tackle them later instead of letting them ruin the fun of exploration, and the masterpiece musician Nobuo Uematsu is responsible for the soundtrack. Oh, and this is technically only the first half; Fantasian‘s second half will launch sometime later this year. Mistwalker tells us that what we’ve already got will last about 20-30 hours, with the same amount being targeted for Part 2. Not too shabby, Sakaguchi-san.

“Absurd yet epic,” developer Slormite Studios labels The Slormancer, out this week on Steam. The titular Slormancer is a no-good, very bad warlock from the past, which probably tells us just about everything we need to know before we embark on our quest to kill him. Or seal him. Or kiss him. Or whatever it is we’re expected to do. Does shiny loot attract your eyeballs? Are pixelated visuals your bread-and-butter aesthetic? Do customization menus with a veritable ton of growth subsystems make you grin like nobody’s business? Then perhaps you won’t mind that The Slormancer may be stuck in Early Access for approximately the next two years and change. Credit where credit’s due —Slormite Studios consists of two (2) people in total, so this is a landmark undertaking. If you have suggestions for this duo, you can find a link to the game’s official Discord on the Steam page. From what little I’ve seen of this action RPG, it looks like it’s on the right track!

Don’t Give Up: A Cynical Tale – April 8th (Switch)

Originally released for PC back in 2019, Don’t Give Up: A Cynical Tale is making the jump to Nintendo for the snazzy limited-time price of $8.49. (Not that the game’s ordinary $9.99 price is likely to break the bank, either.) I could use more reasons to avoid eating fast food in the morning, so maybe I ought to give this comedy RPG a download. But the laughs are loaded with purpose; Don’t Give Up is a relatable tale, one which highlights the ways the world can beat you down. The protagonist is a mentally ill game dev doing their damnedest just to get by as they navigate a vibrant modern setting, facing inner demons and hilariously awkward social encounters. If that alone doesn’t grab you, do bear in mind that Don’t Give Up: A Cynical Tale also touts real-time strategy battles (because hey, why wouldn’t it?) and sports “Very Positive” reviews on Steam. Oh, and the publisher is Taco Pizza Cat Games. Taco. Pizza. Cat. Games. Yeah, I’m skipping the McGriddles this week.

ISLAND is one of those Frontwing visual novels that, as is typically the case with Frontwing games, lingers in Japan for years before releasing in the West. It launched on Windows, followed by PlayStation Vita, PlayStation 4, and finally the Switch. When ISLAND could no longer find modern hardware to infiltrate, it finally turned its gaze westward, hitting Windows in 2018 and — you guessed it — making its overseas Switch debut in 2021. I’ve seldom heard a point of negativity leveraged against ISLAND, a romance story in a science fiction wrapper where every route you choose loops into the main plot in meaningful ways whilst offering its own variation on the overarching emotional roller coaster. But let me dispense with the neutral writing for just two sentences here and contest Karen’s bold claim that I’d be talking about curry for any other reason than to talk curry. Karen, you Karen, my love for curry eclipses the heavens.

Speaking of iOS games, it seems like Crescent Moon Games’ Ravensword: Shadowlands pops up somewhere new every few years with a logo that’s stretched out differently each time. This year, Ravensword is sporting a rather wide logo that coincides with its debut on the Nintendo Switch. Mobile games today (see Fantasian, above) sometimes have production values on par with console games, and at the very least, the hardware has seen exponential gains in the last ten or so years and the occasional game that makes you say, “that’s on a phone?” That said, this is indeed a 2013 iOS game that was later ported to PC and is now on Switch. From handheld to not to handheld-if-you-want-it in eight years. Whatever your feelings are on how well the visuals have aged, this new release still features several ways to customize your character and progress, with decision-based gameplay, multiple weapons (you are indeed not limited to the titular sword), and, yeah, big ol’ dinosaurs.

The House in Fata Morgana: Dreams of the Revenants Edition – April 9th (Switch)

Pinch me if you’ve heard this one already this week. A game that released for several systems in Japan eventually made its way here, and now it’s available on Switch. At least this one’s a little bit of a different story! The House of Fata Morgana, which RPGFan’s Robert Fenner gave a positive review back in 2016, has been stuck inside the hearts and minds of visual novel fans everywhere ever since. A few years later, The House of Fata Morgana: Dreams of the Revenants came to PS4 and Vita, packing in a companion game entitled A Requiem for Innocence as well as a fully-voiced extra episode called Reincarnation. Toss in even more narrative content in the form of “Short Stories,” plus a music player and art gallery, and it’s pretty much impossible to argue that this version of the Gothic suspense VN is anything but definitive. I played the original on PS4 but skipped out on Dreams of the Revenants, which was a) a silly mistake, given how much I loved the game; b) ultimately a good thing, I suppose, because this is, as the kids do say, “perfect for Switch.” I know it’s kind of my job to give readers a sense of what they’re in store for when it comes to the videogames we cover, but in this case, I’d sooner ask you to trust me and go in blind if The House of Morgana: Dreams of the Revenants intrigues you enough to grab it from the eShop, or even one of the physical releases from Limited Run Games (there’s a regular and collector’s edition available). There’s only one first time with great storytelling experiences. This is one of them.

Do you remember how, ages ago, and by ages ago I mean literally a week ago, I talked about Trails of Cold Steel III launching on Stadia? Do you also recall, ye of good memorization and cheer, that I recommended Scott Clay’s fantastic guide on getting into the Trails series for RPG enthusiasts who have yet to take the plunge? Well, we’re back. Trails of Cold Steel IV, the final game in this tremendous franchise’s long-running Erebonian arc, happens to be releasing on Switch and Windows right alongside its Stadia debut. If you’re buying Trails of Cold Steel IV, chances are you’re comfortably familiar with other Trails titles, which means you likely know what you’re getting yourself mixed up in. If you’re a newcomer, well, don’t buy Trails of Cold Steel IV yet. It’s one big spoiler for not only the first three Cold Steel installments but in many ways other entries as well. Falcom subtitles (sub-subtitles?) this “End of Saga” for good reason, my friends.

I purchased a Cat Peach amiibo from Best Buy over the weekend. I have zero regrets. It’s the most adorable thing I’ve seen since at least Thursday. It’s well-made, too! I’m convinced that amiibos are the best video game figurines, dollar-for-dollar, for those of us who lamentably can’t typically afford to drop hundreds of bucks on the really nice stuff.

When I got home, I put Cat Peach in front of my real cat, Tiki. Tiki sniffed Cat Peach and then went back to sleep. She didn’t give a heck about Cat Peach.

That’s life for ya. One writer’s treasure is another cat’s trash. All I can do is hope y’all enjoyed the latest edition of “Coming This Week” and have a blast with some role-playing goodness. Catch you on the flip side, friends!

Big week for Switch if you are into any of those titles or don't have access to play them elsewhere. I was not the victim of any April Fool's pranks this year. I kinda felt like gaming media sites were a little gentler this year.

You're not the only one - I'm not a fan of April Fools' Day either.