Stroll (and Fly) Through the New Locales Coming in Final Fantasy XIV: Endwalker 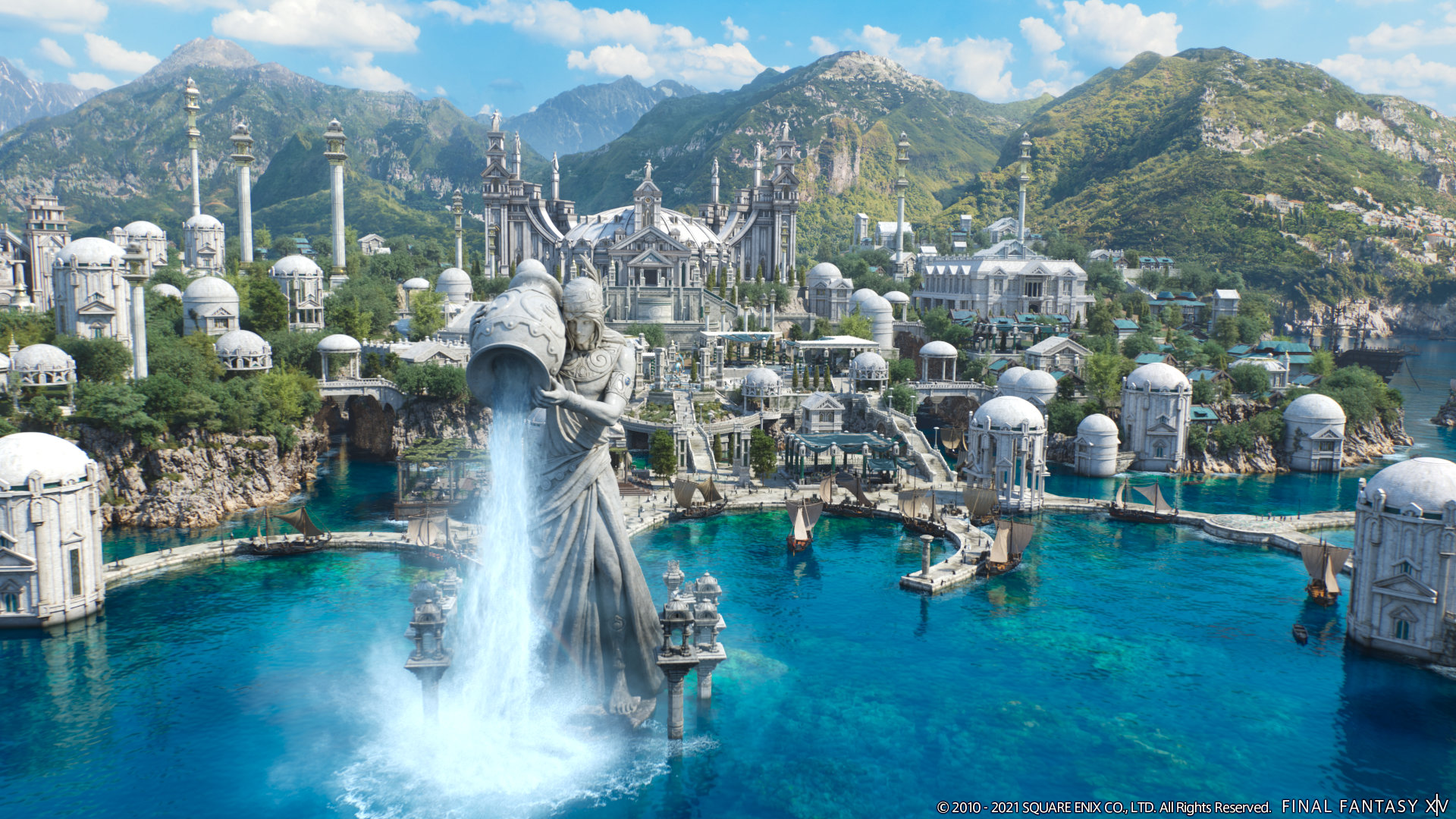 At this weekend’s Final Fantasy XIV Fan Festival, we got a veritable mountain of new information on this fall’s upcoming expansion, Final Fantasy XIV: Endwalker. Among them are a series of new videos and screenshots that show off new areas and characters that are coming in the world-spanning expansion. Let’s go!

Long discussed but never seen in-game, we will finally get to visit Sharlayan in Endwalker. Koji Fox and Yoshi-P were quick to point out that it is specifically Old Sharlayan we will visit. Maybe the holier-than-thou Elezen of not-Old Sharlayan don’t want us mucking up the place. Old Sharlayan will be one of the new player hubs, specifically referencing Shadowbringers‘ Crystarium as a similar hub town. As someone who unequivocally adores every beautiful corner of the Crystarium, it’s a tall order to think something could top it, but you know, I am liking what they are showing us here. If the walkthrough video isn’t enough, check out some art and screens:

Labyrinthos is a mysterious new area we will get to explore. As much as the dev team likes dangling carrots for us, they actually didn’t let the fake sky and artificial sun go unmentioned, and explained that Labyrinthos is underground, and noted the architecture’s interesting blend of old-style buildings that are accented with unique technology. It leads us to the obvious question: While Labyrinthos is underground, we don’t know where said underground is, and the bizarre music at work and knowing Endwalker will take us to the moon, well…

And speaking of the moon, let’s just get into it and walk around the stunning Mare Lamentorum, a segment of the moon that players will freely traverse, with our precious star shining out alongside the inky black of space and the twinkling of stars. Seeing the Warrior of Light fly over a lunar crater, I was filled with unexpected feelings of Mass Effect. Yoshi-P stressed that ML is simply one area on the moon we will be visiting, but even on its own, it’s hard not to be impressed. The Final Fantasy IV influences in Endwalker are many, and the moon itself is one of the biggest. That Mare Lamentorum is so clearly inspired by the palace on FFIV‘s moon just feels like my childhood in a glorious new dimension. (Yes, I know there was that DS remake, but this is just on another level.)

But there’s more going on in Mare Lamentorum, including what appear to be ancient libraries and winding caverns. Yoshi-P and Koji Fox wasted no time in responding to fan comments on the stream who noted the music in this video is right out of an area in Shadowbringers with a similar design. Remember what I said about dangling carrots in front of us?

Thavnair has long been talked about in Final Fantasy XIV‘s world of Hydaelyn, much like Sharlayan above. A far-off land where talented crafters, dancers, and more hail from, the Southeast Asian influences on this area’s design cannot be understated. The architecture and liberal use of color—all of the color—make Thavnair striking just to look at.

Within Thavnair is the city of Radz-at-Han, also long discussed and never seen until now. And if you thought Thavnair at large was colorful, hold on to your Archon Thrones:

We already knew the Warrior of Light would be traveling to Thavnair, a polity of some importance that has featured on the sidelines in most prior bits of storytelling. We knew we’d visit the Thavnairian city-state Radz-at-Han, too. But whereas previously we’d relied solely upon some nifty concept art, Yoshida has now shown us many an overhead view of a settlement that is, in a world, colorful. Bright golds, catching reds, deep purples, lime greens… this place will bring your fancy TV’s HDR to its knees. As for the architecture, I was envisioning significant Hindu influences even before I saw the gorgeous elephant statue. Now that goes without saying.

The last area reveal for now is the fact that players will at last be able to travel to Garlemald, imperial capital and recently-made wasteland. The Empire, ever the vast authoritarian thorn in Eorzea’s east side, is crumbling. It’s aflame. Such devastation was someone’s intention.

To wrap up this article, we want to touch on some new characters that will be introduced with Final Fantasy XIV: Endwalker: The Magus Sisters and the Namingways… I mean the Lopporits.

The Lopporits are rabbit people. No, not Viera — though we’re finally getting male Viera, so I suppose this is as good a point as any to bring that up. The Lopporits are clearly thinly-veiled allusions to FFIV‘s Namingways, a race of record keepers off the bunny-go-lucky variety. The Namingways are now back, under a different name, which I reckon is weirdly apt, no? And there’s the Lunar Whale, our newly-released eight-person mount. And plenty of remixed Final Fantasy IV musical fare brought to us as ever by the exceptional Masayoshi Soken.

One of the coolest things about being a lifelong Final Fantasy fan has been seeing how and where and why franchise-famous supernatural beings manifest in each entry. Final Fantasy XIV, being not even “just” an MMO, but an especially gargantuan game even among MMOs, has enabled the designers to incorporate many such beings like Ifrit, Shiva, and Bahamut. Driving an airship-sized drill into the fact that Endwalker has Final Fantasy IV elements, we’ll be seeing XIV‘s take on the Magus Sisters this year. Their vibrant attire and vaguely Hindu-esque masks has me thinking they’re in some way tied to the Thavnairian story, but that’s just a wild guess.

That’s all for this article! Be sure to check out the front page or our Final Fantasy XIV: Endwalker hub page for more from this year’s Fan Festival!

Special thanks to Quinton O’Connor for helping write some of this article, especially the more colorful parts.