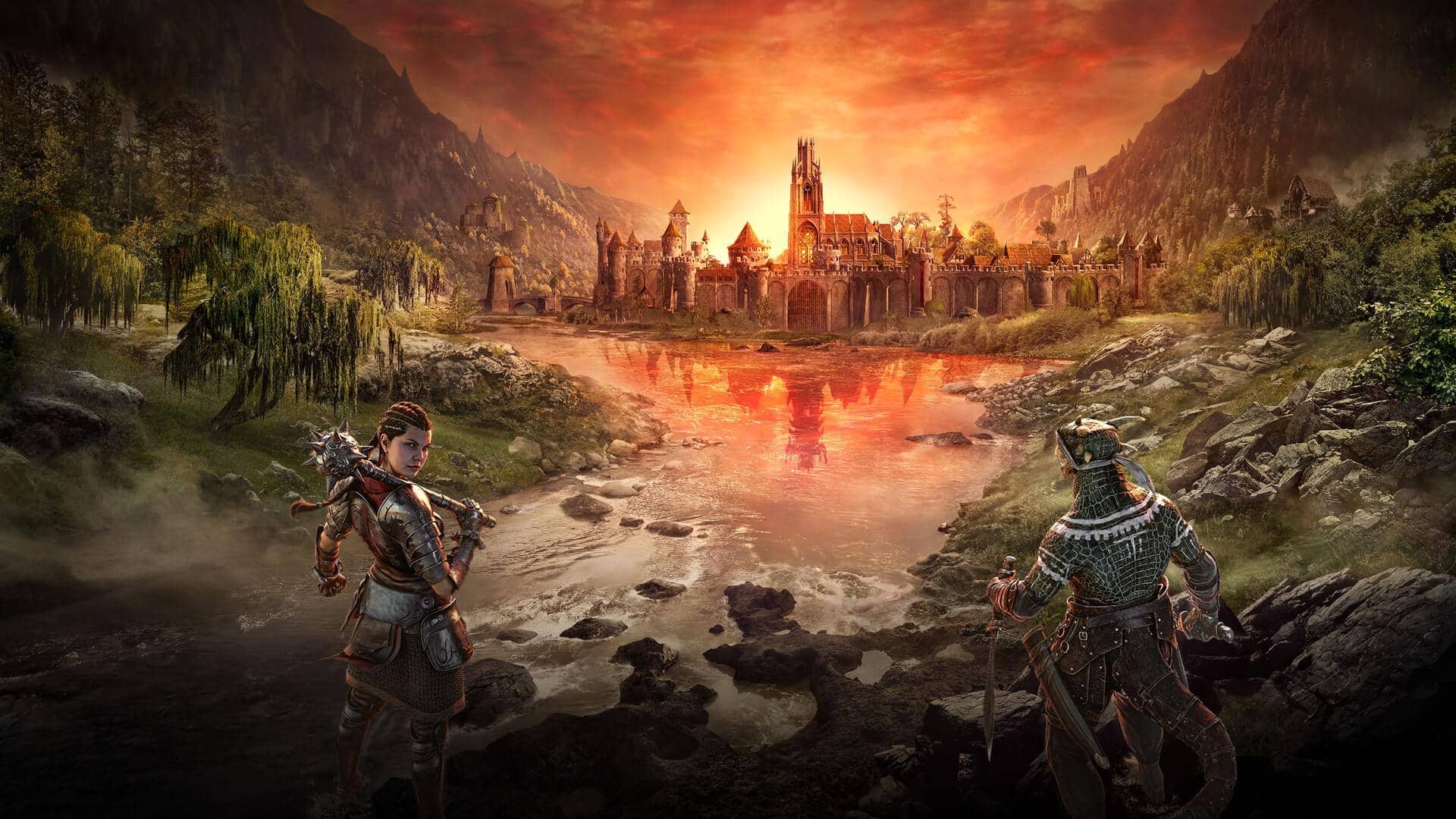 Do you feel it, fellow denizens of the Northern Hemisphere who share similar climatic conditions to my own? The heat is rising. Warmth without reason. Hotness for the sake of hotness. Some flock to beaches, slowly but surely reopening in my part of the world. Others take solace indoors, sipping iced teas and pretending it’s just an especially heated week.

June is upon us, and for many millions of Earthlings, that means summer. “Summer is coming,” the Starks of A Song of Ice and Fire might have said, were they idealists rather than realists. But there is precious little that is ideal about summer here in North Carolina. In fact, I can think of only two things, and long-time readers of this column can safely guess what one of those will be.

First, it means that I get to plant sweet corn in my garden. That’s right; I dabble in farming! It’s fun!

More to the point, it means I’ve got less ambition to go outside and more gumption to play role-playing games, or as we often abbreviate them, “RPGs.” I wouldn’t describe this week’s batch of newcomers as one of the biggest showstoppers of the year, but there are certainly some anticipated entries here — and I fully intend to use their titles as metaphors for just how hot it is outside today, so please look forward to it.

Look up. Now look down. Now look up again, and really take your time studying that screenshot. Do you see what I see? Percentage-based health and mana pools. A comprehensive inventory. Empty skill space for your hotbar-editing pleasure. Perhaps most importantly of all, a shield named after a Greek god. Indeed, Anima: The Reign of Darkness has all the makings of a Diablo-style Western RPG that knows exactly what it is and revels in it. You’ll explore a dark fantasy world, trek through labyrinthine underground dungeons and kill demons by the thousands. With over ten (!) difficulties to choose from and numerous secret levels to discover, Anima: The Reign of Darkness might scratch a particular itch if you’re looking for a good time finding rare loot and stopping irredeemable demonic villains from doing Very Bad Things, Indeed.

The Elder Scrolls Online: Blackwood is the latest big chapter in a seven-years-and-running MMO based on Tamriel’s distant past and the many-splendored adventurers who fought to protect the lands they loved. Blackwood centers on the regions of Cyrodiil and Black Marsh, and it tells the tale of the nefarious Daedric Prince Mehrunes’ Dagon and his wicked plans for Tamriel. Something of a spiritual prequel to The Elder Scrolls IV: Oblivion, players will be tasked with closing Oblivion Gates — vile realms of Daedric power — and this endeavor will often involve magma. (Because nothing says “hotter than hell” like magma.) Well, other than the present temperature outside my apartment. But I digress. Blackwood will arrive on PS4, PS5, Xbox One, and Xbox Series X/S hardware one week later on June 8th, so console players don’t have to wait long to join their PC brethren putting out fires with gasoline.

You know what’s even hotter than orange flames? Green flames. Well, most would technically answer with “blue flames and white flames,” but green flames aren’t so far wayward from blue flames, right? And so what if green flames tend to occur due to the presence of copper? Look, I’m just trying to say it’s hotter than green flames outside my window right now, is all.

When it first landed on PCs in 2007, World of Warcraft: The Burning Crusade was a hit. By adding new races, new classes, and a storyline that many consider superior to vanilla World of Warcraft‘s (albeit not quite as strong as almighty Wrath of the Lich King‘s), Burning Crusade made fans blush with excitement. As someone who has admittedly never gotten into WoW, this was when my friends began their quest to rope me in; and I’m certain the expansion’s inherent quality is the reason why. Now that World of Warcraft Classic is a thing, longtime players have had the opportunity to retrace their steps in the Azeroth that time almost forgot — the World of Warcraft before it was changed forever by not one, not two, not three, but eight subsequent expansions. Demand was high for a return to the way things were just afterward, and Burning Crusade Classic is the undead-fueled nostalgia trip many have been waiting for.

Daybreak. The dust has settled. This is when you’ll clean up debris and rebuild your defenses, because whenever night comes in The Last Spell, the last bastion of humanity will go toe-to-toe with vicious armies of monster hellbent on extinguishing the light forever. Developer Ishtar Games describes The Last Spell as a tactical RPG with rogue-lite elements, which probably means there will be death. Lots and lots of death. Fittingly, the premise of The Last Spell involves hard-pressed and blatantly Machiavellian mages opting to end decades of war by casting a spell that obliterates much of the world. Now there’s a strange purple mist everywhere making people crazy “or worse,” so that’s not good either. The Last Spell enters Early Access this week, but bear in mind the developers don’t foresee a full release for at least a year, possibly longer. But hey, there’s also a free demo, so check it out!

Tail Tail Studios released Winds of Change for Windows, Mac, and Linux two years ago, and our intrepid reviewer Neal Chandran had a lot to say about it. He praised many of its mechanics and its impressive production values while recognizing that the game’s voice acting was, at times, somewhat inconsistent in quality. Blending the visual novel genre with point-and-click adventure elements, Neal remarked that Winds of Change is something of an “East-meets-West” in game design. In that case, Winds of Change seems a surefire pick for a Switch port, and lo and behold, that’s precisely what we have in store for us this week! You’ll have dialogue options galore, and more than a few will help to dictate the story in surprising ways, so if dropping twenty bucks strikes you as a fair deal for a fun time, here’s your newest nighttime read-and-play.

While I was researching Skellboy Refractured for this write-up, I chanced upon an interesting tidbit: the excellent Hilary Andreff covered the original game’s Switch release in a Coming This Week column from before I was brought onto the team! There, I learned that Skellboy has a fun twist on typical save-the-world plots, in that an ancient hero has been resurrected by an evil wizard. The protagonist swaps body parts to get stronger, so that’s a thing. Skellboy‘s Switch debut was followed one year later by the PC release of Skellboy Refractured, which includes a co-op mode, a randomized dungeon, a substantial New Game+ mode, over 20 brand-new items, and of course, the Skellboy game itself. Now Skellboy has come full circle, with Refractured re-releasing on Switch for fans of the first version to double-dip with all sorts of cool updated features. Are you a bad enough dude to rip your arm off and attach someone else’s just to learn a new ability? You are? Well, please confine your hobby to Skellboy Refractured, out this week courtesy of the Nintendo eShop.

I gulped down two bottles of water during the making of this article. Which is good, right? Water is great. Our bodies are happier when we drink lots of water every day. I want a happy body, but more than that, I want to be free from this summer that technically hasn’t even started yet.

Do any of this week’s releases draw you in? Are you looking forward to revisiting an old flame, if you will, with the double whammy’s worth of MMO expansions? As for me, I’m making my way through Final Fantasy XIV: Shadowbringers. Without spoiling anything, let’s just say that every time I see the weather listed as “Everlasting Light” I wince and wiggle myself closer to my ceiling fan.

Have I mentioned yet that it’s hot outside?