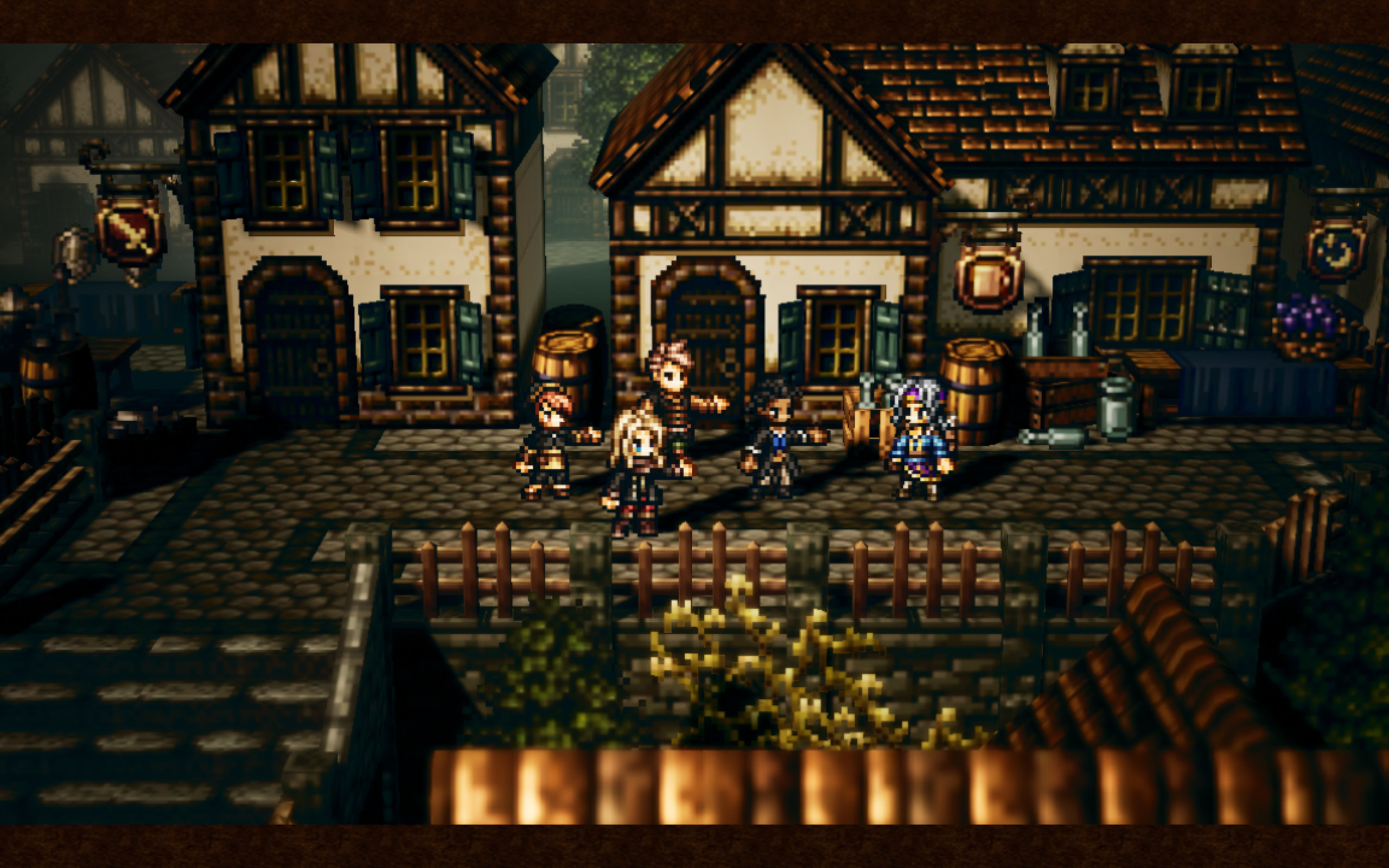 While Octopath Traveler was an undeniable success, Square Enix haven’t given any hint towards a direct sequel. Perhaps Champions of the Continent is intended as a bridge between mainline entries; given the immediate aura of quality emanating from this mobile title, it perhaps suggests plans are being hatched for a greater Octopath universe. I received access to the closed beta test for Champions of the Continent, and given the sour reputation that mobile spin-offs often have, I was pleasantly surprised by the experience.

Although Champions of the Continent is a mobile-exclusive title, its presentation is very close to its console counterpart. Many mobile games have a very obvious ‘hub’ where players are bombarded with menus, convoluted systems and… adverts. The thought alone is enough to send a shiver down my spine. It was refreshing to begin Champions of the Continent and see no such thing; the player takes control of their character in a field map, where they receive a few tutorials covering basic aspects of the game. The flow continues very naturally, and after a few New Player configurations, it became clear that this choice of opening was no illusion. I half expected it all to be smoke and mirrors, but nope, I was free to journey to a grand total of three main towns in this beta, each connected with fully explorable maps akin to the original Octopath Traveler. Yay!

The introduction itself was primarily standard fare, introducing the game’s core concepts and some key exposition. Our first gacha moment was almost unnoticeable; I only realised what it was when installing the beta on a second device, as we cannot currently transfer data. I assumed that everyone would get the same standard starter hero. On my first device, I received a reasonably standard-looking character who could easily be the generic protagonist of a JRPG, so it was a fair assumption to make. I received a different hero when moving from my phone to my tablet, which made my palms sweat. I’m definitely the kind of person who will ‘reroll’ until I get my desired character in the game’s full launch. Luckily, the character seems to be drawn from a pool of five-star units, which appears to be the current highest tier, so hopefully most players will be on fairly even footing whichever Traveler they initially receive.

Speaking of characters, let’s take a moment to look at one of the most important parts of any mobile game. Your party, which consists of up to eight characters, is given a name. I feel this is a little misleading, as it’s really just a name the characters in the story will refer to you as. Players who give their party a name like “Band of Merry Travelers” will find it a bit jarring in conversations, but I’m sure that would exceed the character limit anyway. Similar to Octopath Traveler, you use four party members at a time in combat and can switch them out at will. All eight will be displayed simultaneously, which makes them feel like a cohesive team and is a great visual reminder that the swapping mechanic actually exists. Bear in mind that each character has an assigned ‘slot’ in each party, from one to four, and you can only swap them out with whoever occupies the reserve team’s corresponding slot. This adds a level of strategy; you want to decide which of your characters complement each other best, and who they can be paired with in the reserve team without diluting any synergies.

Combat in Champions of the Continent is surprisingly similar to that observed in Octopath Traveler, and it’s made an impressive transition from console to mobile. There is no auto-battle function to be seen, and selecting which abilities to use is very intuitive. You can equip characters with a limited number of abilities to use in combat, with that number increasing as your character levels up. Choosing which ability to use simply takes two taps. Party actions are all input in one go, including any character switching or boosting, and actions happen sequentially upon pressing the big blue “Attack” button. Enemies will act alongside your own units, with the turn order being dictated by whoever has the highest speed. It’s honestly very fun and impressive for a mobile game, and players who loathe auto-battle features will find a lot to enjoy in Champions of the Continent’s combat.

It’s all sounding quite promising so far, isn’t it? We’ve covered explorable environments and the satisfying battle system, and it’s the stories that tie all that together. I say “stories” because, as in its predecessor, there are many different tales to follow. The main story seems to consist of three main Paths, each aligned around a specific facet of “influence” — Wealth, Power, and Fame. The first chapter of each Path begins in a different town, and they all have their own antagonist.

While the closed beta only covered the first two Paths and previews only allowed to cover contents from their respective first chapters, I can see that each Path’s story is going to be full of high drama. The Fame Path’s antagonist is a bloodthirsty playwright whose starting area is called Theatropolis, which may sound campy, but its actual writing and tone don’t come across as a mockery of its deeper themes. The stories aim to tackle some pretty hard subjects, some of which are relevant in real-world society, and I have full respect for the writers for managing to keep things entertaining without being reductive. Alongside the main storylines, there are also character-specific story arcs with distinct chapters, as well as general sidequests. If you’re the kind of gamer who enjoys immersive storytelling, a somewhat rare feature in mobile gaming, then Champions will keep you occupied for quite some time.

This next point will either be a Pro or a Con depending on your opinion of Octopath Traveler: the graphics and music in Champions of the Continent seem to be lifted directly from it. It’s hard for me to tell which tracks, if any, are originals, but I definitely recognised at least a handful. I personally loved Octopath Traveler‘s soundtrack, and I enjoyed hearing some familiar music. For me, it’s no different from any other mobile spin-off using returning music from their source games as a fan-pleaser. Similarly, using an identical graphics style brings a welcome sense of continuity. Some may see it as a cheap and easy cash grab, but combining all the other elements I’ve talked about thus far leaves Champions of the Continent feeling more like a respectable expansion of Octopath Traveler than riding on its coattails.

On the subject of cash grabs, however, it would be remiss of me not to touch on monetisation. Free-to-play models are the norm in mobile gaming, and the developers have to get a return from that in some capacity. Many other games use some form of ‘energy’ to gatekeep how much time the player can actually spend playing the game while charging a premium for refills. While I’ve not seen anything like this in Champions of the Continent, I’m still wary of how monetisation might be forced in at some point. I will, however, say I am not against this at all, so long as the practice doesn’t come off as predatory or exploitative. Developers and the staff that work on these games deserve money for their product.

Unfortunately, I’ve seen games employ quite obfuscated tactics when it comes to getting money from their players, and I sincerely hope we don’t see that in Champions of the Continent. Transactions are disabled in the closed beta, but we can still see things such as Rubies which will undoubtedly be available for real-cash purchase. However, everything also seems to be obtainable via in-game methods, whether that’s rewards for completing daily quests or from achieving certain progression milestones. As it stands, the closed beta feels very relaxed with having to rely on gacha rates, but it remains to be seen whether players will need to rely on higher-rarity characters further into the game. It’s already clear that there is a currency for duplicate pulls from the gacha, used to enhance their respective character, but these are also available from each character’s personal path quests.

I genuinely enjoyed the time I’ve spent in the closed beta for Champions of the Continent. The game has a distinct air of polish, and there’s clearly been a lot of work keeping it on par with Octopath Traveler in terms of quality. It definitely feels like an Octopath game adapted for mobile devices rather than a generic gacha clone wearing an Octopath skin. I look forward to the full release; aside from wanting to see how the storylines I’m invested in play out, I am keen to see how systems like character progression and The Nameless Town continue. I’m imagining the latter will be a standard resource dump to upgrade our base, but I’d love to see it done with some nods to town-building elements seen in other console RPGs. The game has a lot of potential, and I hope we don’t need to be apprehensive of seeing Champions of the Continent setting a new standard for mobile gaming.