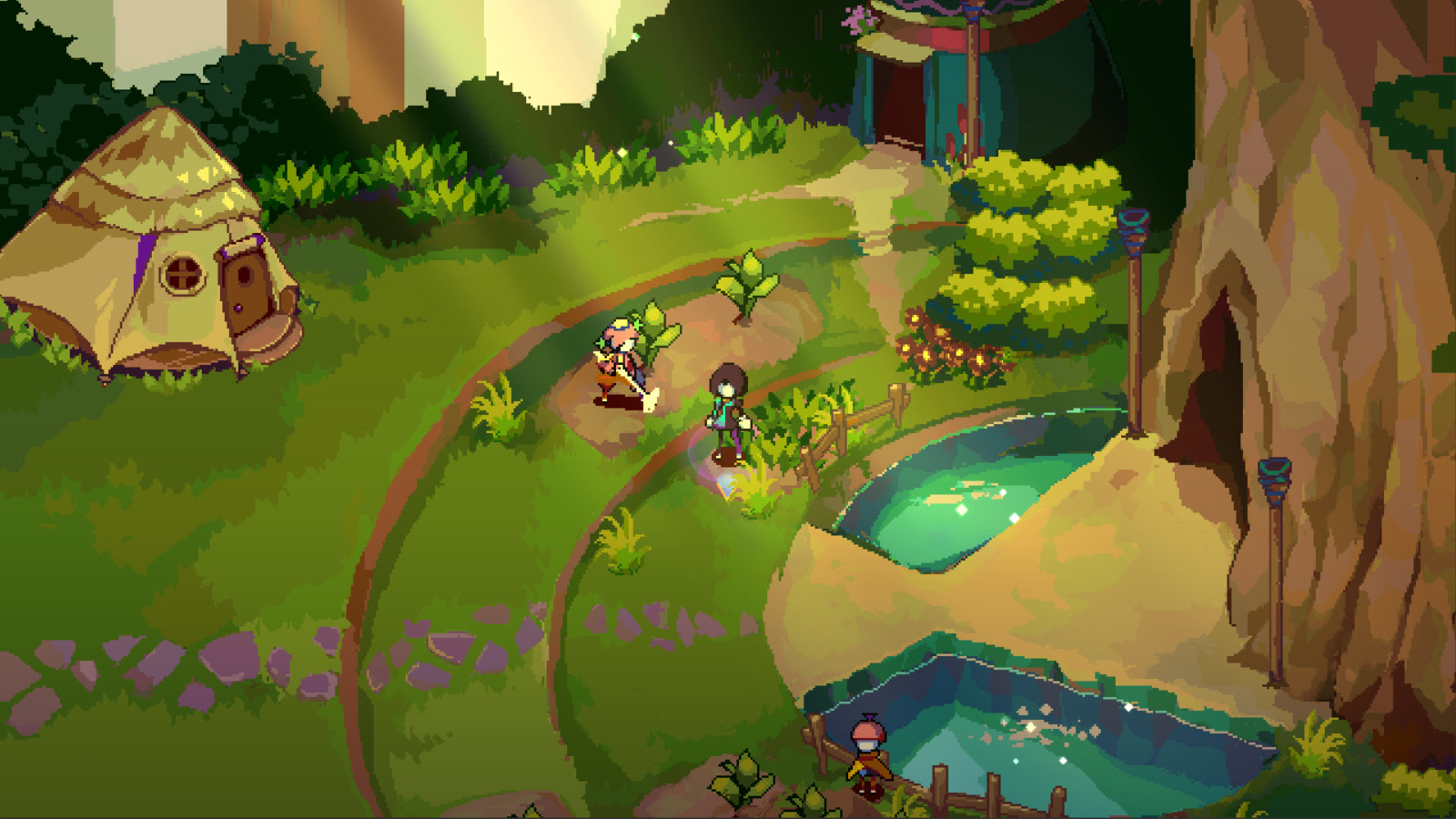 Recently, I’ve been playing a few rounds of the Pokémon Trading Card Game with a good friend of mine. It’s a nice little in-betweener as we get together to wade through a collective dozen or so episodes of InuYasha and Demon Slayer every weekend. I bought us the two theme decks from the current set, Brilliant Stars – Corviknight V and Lycanroc V – and gave the latter to my friend.

Last weekend, I won both times we played. I felt like royalty. “I’ve still got it,” I thought to myself. “I could go big with this.” And then, on Saturday afternoon, we played again, and he swept me three-to-zero. I could blame bum luck. I could blame sleep deprivation. I could blame that Lycanroc deck’s overpowered Steelixes. Or I can face the music and strive to get better.

But seriously, it’s partly those Steelixes. Here are some RPGs coming this week.

I’m not sure what to make of Administrators. It’s obvious the game’s studio, Dnovel, has had some fun with a well-worn trope in this game. The player character and their friendly coworker are (as I understand it) written to be oddly chill about working at a hotel with rumors of spooky ghosts, past tragedies, dark secrets — you know, the works. The central theme is that neither of you particularly cares. About, like, any of it.

That said, with multiple endings and the promise of “something living in the basement,” I have to assume the lead characters’ nonchalance is threatened in some fashion before the credits roll. But we might not know for sure for the next several months to a year, as Dnovel describes Administrators‘ eventual full release as the point at which “[they] reveal the plot.” Hm.

This week, we’ve got two new Early Access games, PC-only, back-to-back. That’s kind of weird, right? Like, not exceedingly strange, but a peck odd. Like finding a few grains of sugar on your toast.

The Iron Oath puts you in command of your very own mercenary company, which is simply darling. A tactical, turn-based RPG, the game puts the fate of your pals in your hands, and every decision you make risks their lives. They will eventually grow old, retire, and even die – sterling features. But the mercenary company marches on, through the decades, in the epic fantasy world called Caelum.

As it stands, The Iron Oath‘s main campaign will lack a conclusion until it leaves Early Access, but the features it launches with on Tuesday sound relatively meaty for an RPG that plans to delay the announcement of a complete version for about a year.

“Think you’re an expert at RPGs?” Not really, no. Publisher Hyperbit Interactive opens their description of RogueStone with that question, followed immediately by an assumption of the affirmative: “Think again.” But I said I’m not, and they’ll never know. I’m mildly upset.

RogueStone aims to challenge seasoned genre enthusiasts. The main quest lasts about 20 hours, but there’s enough loot to last for dozens more. Monsters scale with your level, but there are no stat caps, so I suppose that means you could eventually outpace them entirely? Maybe? Hey, don’t look at me. I’m that bizarre player who grinds to Level 100 completely counterintuitively in Final Fantasy VIII. No regrets. OK, some regrets.

I’m getting kind of an old-school Zelda vibe from RogueStone, but with a more Ultima wrapper. Potentially rather tasty.

Anuchard has fallen. Oh, right. Anuchard is the name of the game, yes, but it’s also the title of the fallen realm. Anyway, it sucks that Anuchard has collapsed, but on the bright side, you’ve been deemed suitable for the role of Bellwielder. No, you’re not jingling Christmas bills to collect donations for poor children, although that would be great if you could maybe do that, too. Rather, you have been gifted the all-important Audros Bell. Just what I always wanted.

Monsters line up to kill you. Puzzles plague your every turn. Even the very earth you traipse upon is filled with terrifying obstacles. Can you wave your beloved prize bell a bunch of times to awaken the slumbering Guardians and restore Anuchard to her former glory? No, genuinely, I’m asking you if you can do that for me; that’d be great.

Yamata no Orochi is an eight-headed dragon. As is customary for most eight-headed dragons, he’s quite mean, and a hero must rise to destroy his ambitions. Samurai Bringer is a roguelike with a constantly-shifting level design, which is cool but doesn’t surprise me. You kill demons by the hundreds, which, again, I’m unfazed. You kill a bunch of samurai, too, which honestly shocks me. I just figured, you know, it would be nice if all the samurai set aside their differences to slay demons.

The game has a distinctly PS1 aesthetic, at least to me, that I think a visit to its Steam page will do a better job of illustrating. I could spend several paragraphs telling you why that makes me happy, but we’ll settle for “this makes me happy” instead.

Yes, Terranova is an interactive visual novel. Indeed, many of us who are over the age of 26 or so will stare at those copyright-dodging imitations of LiveJournal and AOL Instant Messenger and foam at our mouths in pure, often cringey, nostalgia. There’s a beautiful story to be told in this game, assuming that it’s told well and to our tastes — what we’ve got here is an early 2000s coming-of-age experience told entirely through the venue of Web 1.0 computer screens.

I was there, and I remember it vividly. On AIM, I was x Hiro Nomura x. Why? Because I felt like it, that’s why. On LiveJournal, I was chaotic soulfires. Not just one soulfire, all of the soulfires. I guess. I have no idea what I was thinking.

A pair of ports, purportedly getting pally on perpendicular platforms.

What do you get when you combine the Neptunia franchise with the Senran Kagura franchise? If you guessed Neptunia x Senran Kagura: Ninja Wars, I will give you my cookie (you’ve got to come all the way out to North Carolina for it, though). It’s a hack-and-slash RPG featuring fan-favorite characters from both sides of the fence, and it popped up on PS4 several months back. If you’re a PC player, mark the date for May 11th.

Previously released on PC, PS4, and Xbox One, Chernobylite is bringing its frightening blend of action RPG and survival horror to bear upon consoles. Check out Abraham Kobylanski’s strong review here!

I broke down and purchased a new deck led by Cinderace. I thought, “Surely this will obliterate Steelix.” I forgot that, in a strange twist of fate, Steelix is a member of the Fighting-type subset in the Pokémon Trading Card Game, not Steel. I may be a baka, but at least I’m not whoever made that decision. Right? Right!

Next week, I’ll contemplate writing an intro and outro that actually pertains to role-playing video games again. The trouble is, once Quinton starts talking about Xenoblade Chronicles, Quinton knows not when to conclude!