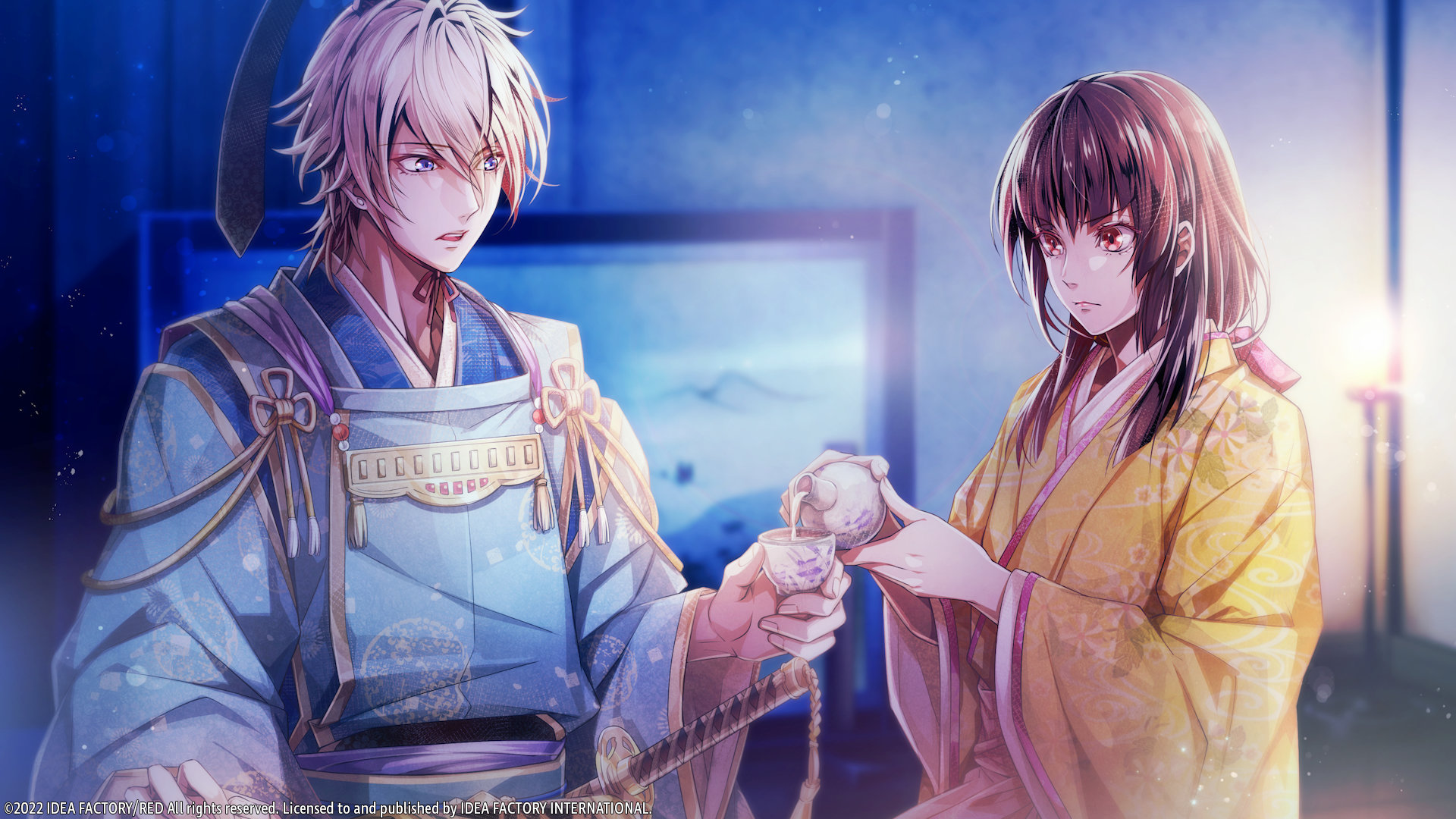 Idea Factory International (IFI) have added several new character profiles, stills, and even conversation snippets to the Birushana: Rising Flower of Genpei website as we approach the June 28th North American launch (EU fans will need to wait til July 1st, so just a little longer). I’ll share a few samples of the dialogue, but let’s start with the Birushana trailer for you to get acquainted if you aren’t already.

Some of the dialogue IFI shared gets pretty intense, to say the least. You’ll find all of this and more on the Birushana website gallery, so head over there if what you find here piques your interest. Do be aware of spoilers though.

I was jolted back by the cry of a horse and saw my brother dismount from his steed in front of us.

Yoritomo Minamoto: There you are.

Yoritomo Minamoto: You never gave me a report from yesterday’s battle.

Shanao: My apologies, my lord. When I have finished my patrol, I will come and deliver a full report.

Shanao: Then when you return—

Shanao: W-what?! My brother instantly lifted me in his arms and climbed onto his horse.

Shungen: Where are you taking him?!

Yoritomo Minamoto: You all return to the estate.

Before he had completely finished speaking, my brother kicked his heels against the horse and we sped away from the others.

His strong left arm was around my waist and he held me tightly next to him.

Shanao: W-where are we going?

Shanao: (Just what the heck is going on?)

Unable to speak or move, I simply rested my body on my brother’s chest.

Even though we were both in armor, I could feel my brother’s heat on my skin, which made me feel a little embarrassed.

Shanao: (But I also feel so calm… Maybe because I know we both made it through the battle safely?)

The more I thought about it, the happier I was to feel the warmth of my brother’s body against mine.

Noritsune Taira: Hey! What are you doing?! Why are you putting your sword away?!

Noritsune Taira: What the hell?! What are you talking about?! You’re walking away now?!

I couldn’t say anything to Noritsune, his eyes ablaze with fury.

Shanao: (All this was just to set up the surprise attack. That takes priority over my fight with Noritsune…)

Shanao: (Ironic… I went into the war to fight Noritsune, but now I’m leaving a fight with Noritsune for the war…)

I bit my lip at the frustration of not being able to respond. I tried to shake it off and leave, but—

Noritsune Taira: Wait! Didn’t you come here to fight me?!

As I tried to escape, Noritsune jumped on me and knocked me to the ground. Eyes like flames look down at me from above.

Noritsune Taira: Why?! Why are you turning away?!

He grabbed me tightly by the chin and I couldn’t turn my face away from him.

Noritsune Taira: Why are you running away from me? Have you forgotten your promise to me?!

Noritsune Taira: You and I… We accepted our fate and our blood… We did it for this very moment…

When he knocked me to the ground, my body was stuck hard, but Noritsune held me down so forcefully I couldn’t feel any pain. I could see the anger, frustration, and confusion in his eyes as he shouted, and it pierced my heart to see him so upset.

Noritsune Taira: I returned to the Heike like I said I would, so I could meet you on the battlefield. And when I saw you, I thought the time had finally come…but now you’re running away, again!

Noritsune Taira: Are you really leaving again? How many times are you going to do this?!

Limited and Day One Editions of Birushana Come With So Much Stuff, but Supplies Are Running Out

Last week, IFI tweeted that stock for the Birushana: Rising Flower of Genpei Limited Edition was starting to run low, so get on that if you haven’t! Here’s all that it comes with:

Canadian residents can also preorder through Video Games Plus, which also includes the EXCLUSIVE trading card!

European fans can preorder the Birushana Limited and/or Day One Edition through their region’s IFI store. The latter comes with the following: