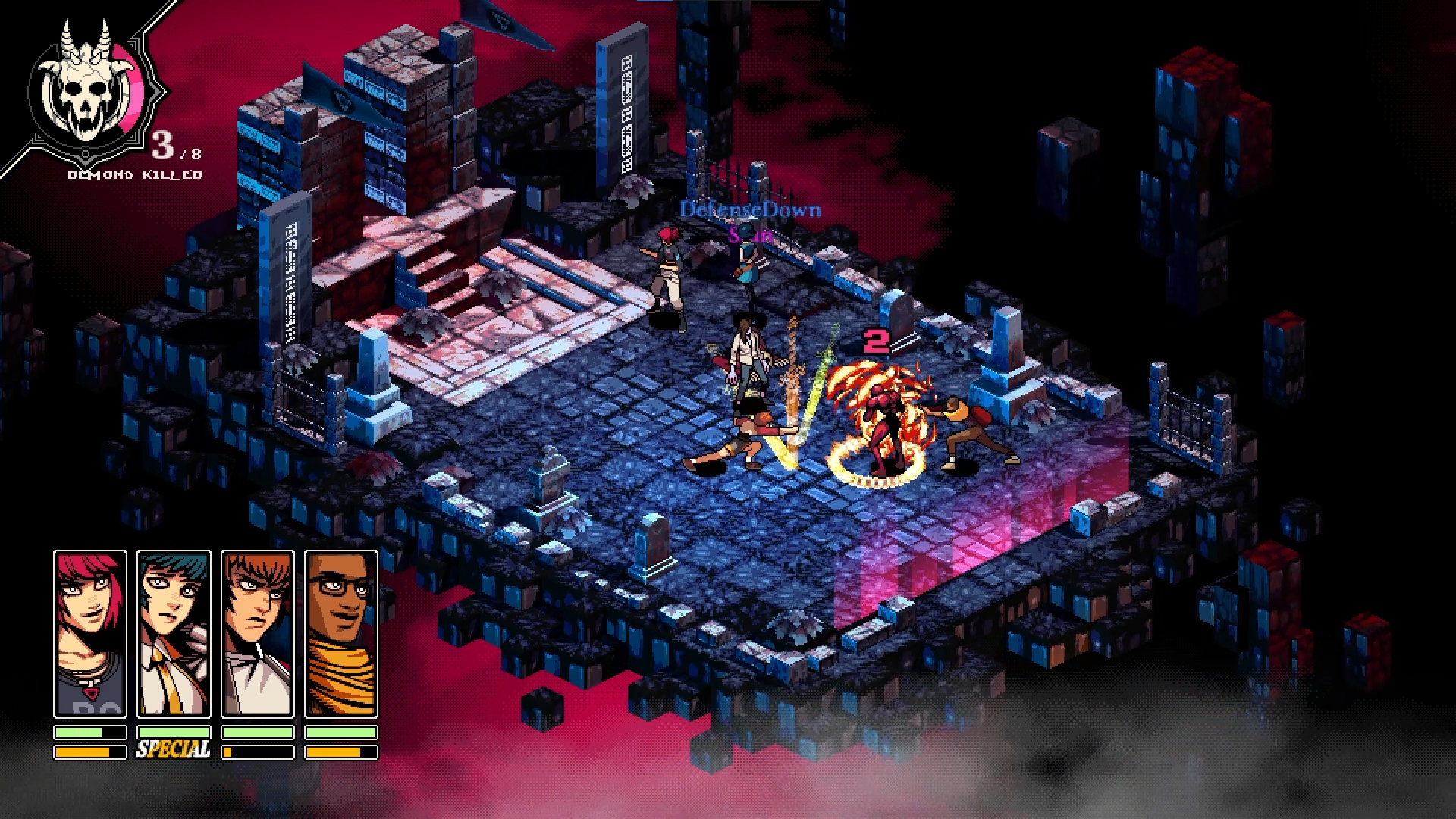 Announced at today’s PC Gaming Show, Demonschool is a new “school-life tactics RPG” from Necrosoft Games, the studio behind Gunhouse and Hyper Gunsport. It’s set to release in 2023 for all major platforms: PlayStation 5 and 4, Xbox Series X|S and One, Nintendo Switch, and PC (including the Steam Deck). Peep the trailer below, which showcases the game’s lurid yet stylish graphics, drawing from modern Persona, old-school Shin Megami Tensei, and classic giallo cinema.

For freshman Faye, the last living member of a legendary demon hunter family, school life is hell! Confront possessed students in the chemistry lab, Yakuza members performing summoning rituals, and more to turn the tide against an invading demon army. Join forces with lovably eccentric classmates, each with their own battle strengths and weaknesses, and build relationships through extracurricular activities. Strengthen these bonds to master fast-paced, tactical combat, where movement equals damage for accessible, streamlined battles.

Demonschool‘s Battle System Promises to be Deep and Dynamic

Here’s an overview of Demonschool‘s battle system, which the press release from publisher Ysbryd Games touts as evoking “genre giants like Into the Breach.” There’s a lot of potential there, and I like what I saw in the trailer.

Demonschool is a streamlined tactics game where movement equals action, decisions can be rewound, and speedy mechanics remove the genre’s traditional cruft. Plan each student’s moves at your leisure, then hit the action button and watch it all play out in devastating, character-based combos. Destin, a hot-blooded fighter, can knock foes forward into Namako’s debuffing dash, and damage dealers like Faye benefit from shrine keeper Knute’s helpful wards. Adjust strategies for monolithic bosses and unusual battlefields, bucking genre conventions. Unleash tide-turning special moves to keep the demons at bay—if they reach the back line, the human world is lost.

Live Out a Whole College Semester in Demonschool

Remember that I mentioned Persona? When you’re not fighting off demons in Demonschool, you’ll be living as a college kid, balancing your studies, side quests, and even significant others, assuming you don’t act all creepy like the nightmarish entities you encounter.

Each surreal encounter brings Faye and friends closer to a dark conspiracy beyond their imagining, but thankfully, student life isn’t all bloodstained butterflies and dolls from hell. Live out an entire school semester, choosing what to study, who to befriend, and how much trust to share. Plan your team’s class schedule to develop their skills and acquire over a dozen new allies through myriad side quests in a vibrant world of giallo colors and lighting. Foster friendships or fiery romances between them all, strengthening combo attacks and elemental affinities and uncovering new endings. Explore extracurriculars in and around town with a darkly comedic cast of eccentrics.

I’ll leave off with some words from Necrosoft creative director Brandon Sheffield. I never thought I’d say this, but I’m excited to go back to (demon)school!

We wanted to create a game with complete transparency while still allowing for mystery. You’ll never have to guess at numbers or what does what. […] We hope the story carries you through to a positive vision for the future, and what is possible when like-minded individuals work together against a larger evil.

Demonschool‘s scheduled for a 2023 launch on all current devices, including the nifty Steam Deck. The official website should have more info for you. Don’t neglect your extracurriculars—join the RPGFan club!