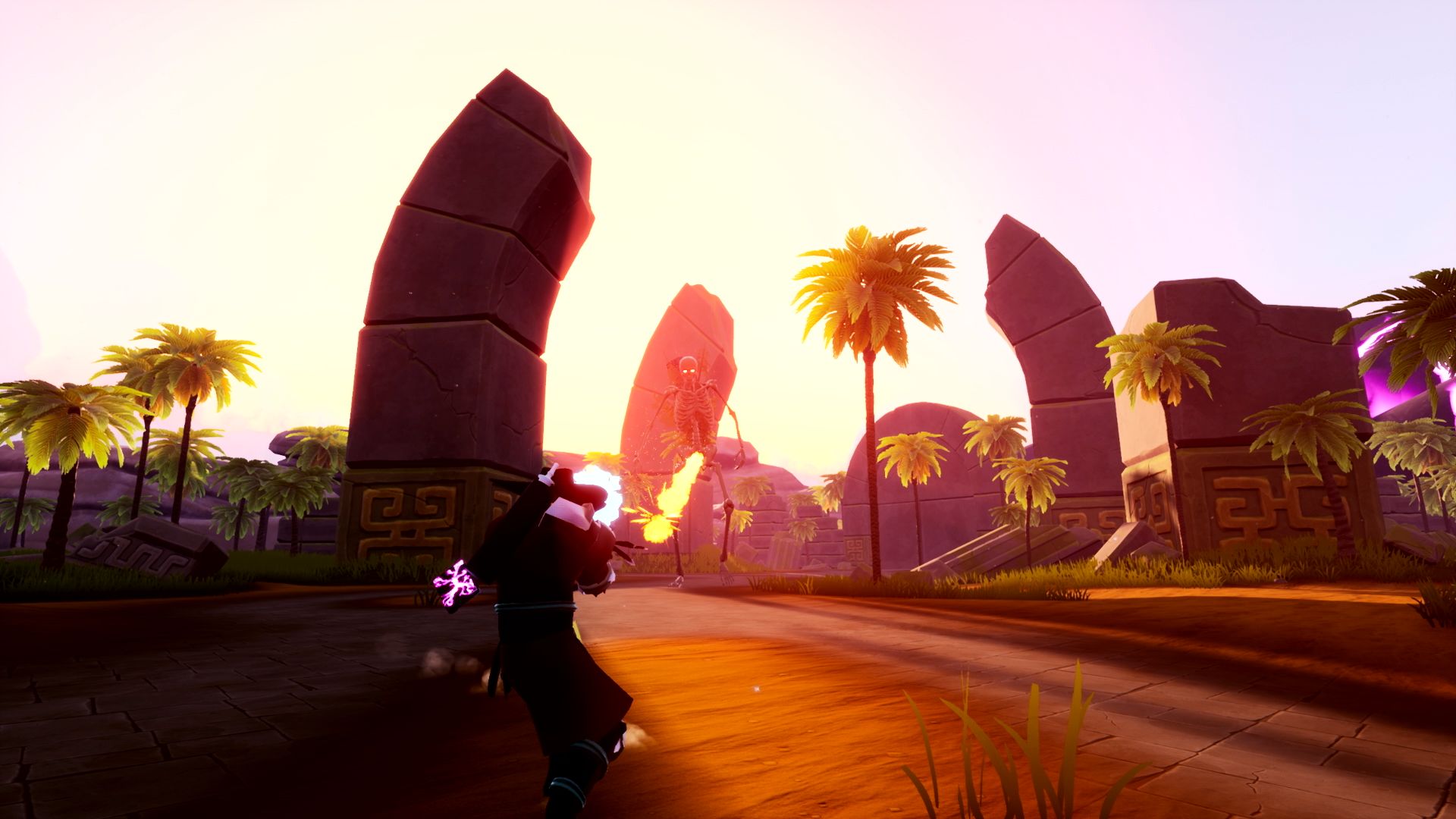 Holomento is a permadeath third-person Action-RPG in early access developed by Nord Games. Being a massive roguelite fan, I was psyched to begin the game in Eventide Pass, a fantasy forest rife with skeletons, slimes, and treasure.

In Holomento, you play as an adventurer plopped into the world with little direction other than a single waypoint indicating where to go to progress your journey (that’s what Holomento calls each run).

To complete a journey, you’ll travel through multiple environments, from icy tundras to magical deserts. Along the way, you collect new gear and potions, complete quests, and level up your character by fighting monsters. Most regions also have a town where you can shop and store gold for future runs. Shops only have basic items at first, but you can upgrade towns by bringing them money and resources, which then allow you to purchase new goods that will help you on your journey.

Holomento features permadeath, so you can’t carry over your gear and experience from run to run. Town upgrades do persist through death, however, and you unlock new starting locations and character classes as you explore more of the world. Anyone who has played a roguelike will feel right at home with this gameplay loop of starting a new run, building up a character, dying, and starting all over again.

Each location in Holomento is visually distinct and has its own soundtrack for towns, combat, and exploration. The unique presentation of each area makes exploration a highlight of the game. When I was regularly discovering new places, Holomento was addicting, and I felt compelled to start new runs to see what else was in the world. I loved seeing what new areas looked like, and the music was catchy enough that I’ve been listening to some of my favorite tracks even when I’m not playing the game. I also enjoyed the art style and how varied NPCs were in different parts of the world. My favorite region was filled with mafioso rat NPCs.

The only disappointing element of each area is that there isn’t a lot of enemy variety. A few enemies only show up in certain areas, but I spent most of my time fighting skeletons regardless of where I was. A little variety would go a long way.

Unfortunately, while I loved the presentation of Holomento, the gameplay lets the presentation down in its current state. Each weapon has a melee and a ranged attack, but melee combat feels very clunky with most of them. There’s little visual feedback when you are hit, and hit detection feels inconsistent as attacks that seem like they should hit often don’t. Fortunately, most enemies are simple, so you can easily take them out with ranged attacks, or if you find one of the better melee weapons, defeat them before they even get a chance to strike.

Boss fights add a bit more depth to the combat. Many of them can be handled by walking backward and spamming ranged attacks, but some demand good play. My favorite boss was the Rat King, a massive rat that could shoot lasers, spawn smaller rats, and drop rocks on your head. Bosses like this are the best part of Holomento. They force you to think quickly and time your dodges well.

As with normal enemies, there is a lack of variety in the bosses. Many are just huge knights or skeletons with only a few attacks. The game would benefit from every boss at least having one ranged attack to prevent players from kiting bosses with their own long-distance attacks.

Combat in Holomento improves a lot once you start unlocking more character classes. Most unlockable classes have more health and better weapons than the default character. These classes make combat much more approachable and add some affordance for mistakes as you get used to the game’s melee combat. I particularly liked the Musashi class, which came with a fast run speed and dual-wielded swords.

The town building component is another major element of Holomento, but it doesn’t feel essential to succeeding in the game. Upgrading towns is very grindy as it requires a significant amount of gold and resources. The biggest issue with town-building is that upgrading the towns doesn’t feel necessary. The most important potions are available right away, and once you’ve unlocked a few classes, you can start with good weapons. Town building wasn’t interesting enough for me to focus on without more significant benefits.

The final issue with Holomento is that it is in a very buggy state. Monsters often clip into walls, and it’s easy to get your character stuck on a texture. There is a helpful button to get yourself unstuck, but it interrupts the game’s flow, especially if you get stuck during a fight.

The bugs are most impactful during dungeons, where you must complete puzzles to open doors. At times, bugs can cause puzzles to become impossible to complete as objectives can clip into walls or doors can fail to open. Again, you can use the unstuck button to get out of these situations, but it’s frustrating to have to resort to that instead of playing the game as intended.

To the developer’s credit, Holomento has improved even in the few weeks I’ve had to play it. Patches have reduced bugs and made the game play more smoothly already, and the development roadmap suggests more fixes and new content are coming in the future. Given the quality of the patches so far, I’m inclined to believe that Holomento will be a much better experience in the future. It’s difficult for me to recommend it now, but Holomento is a game to keep an eye on if you are a fan of Action-RPGs.