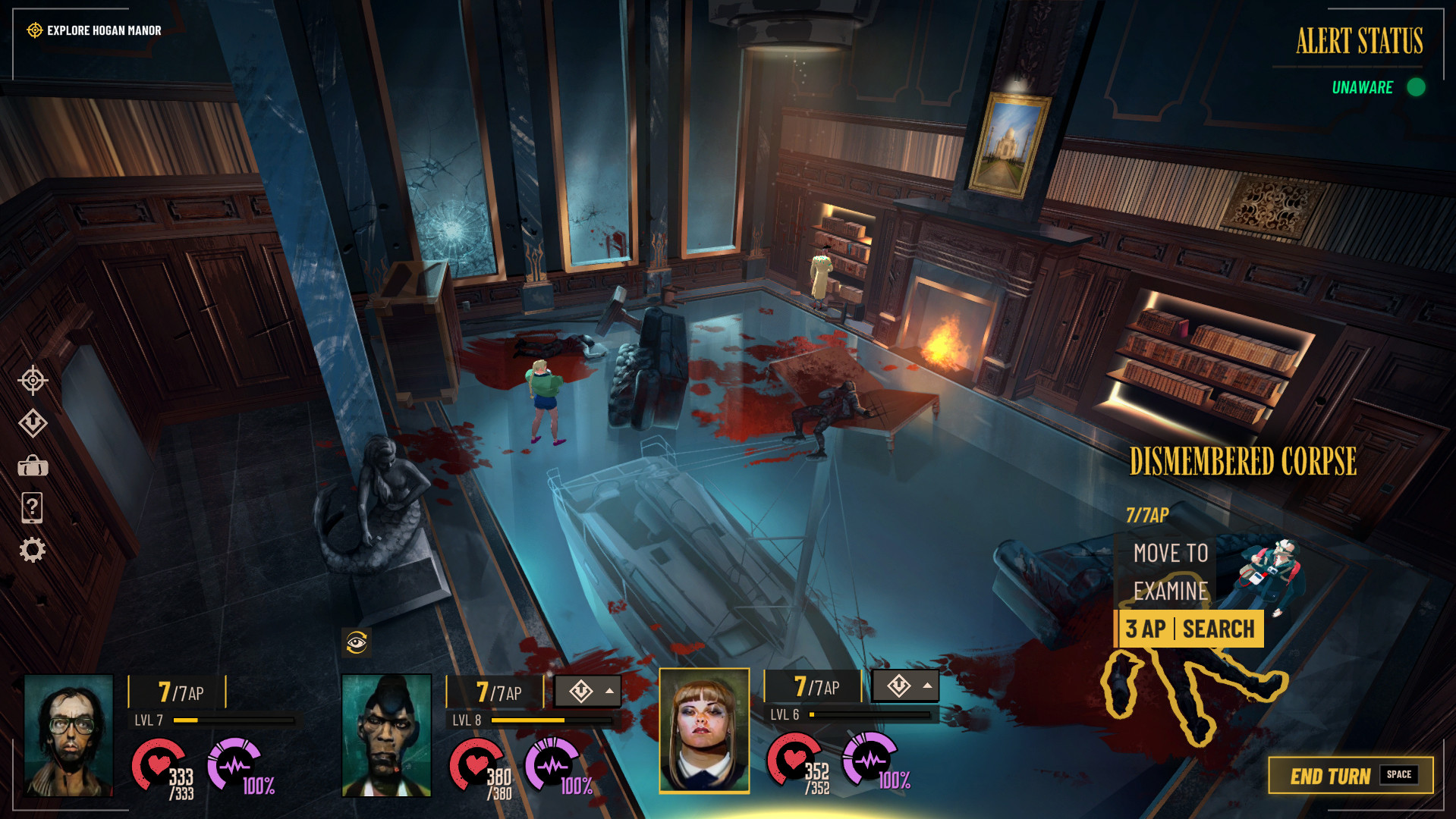 The future hasn’t been kind to London. Unemployment and homelessness are out of control, and soulless mega-corporations do everything they can to make it worse. In the Big Wet, as people call it, Frank Barber and Sally Wheeler are two criminals who fancy themselves as modern-day Robin Hoods, stealing from the rich to give to the poor. After a two-year break following a failed heist, the pair are approached by nervous techie Gavin Dorsey, a former employee of Hogan Industries, the largest and most powerful corporation in town. Gavin wants Frank and Sally to help him break into his old office so they can steal incriminating data about Hogan and its corrupt CEO. As you might expect, things do not go as planned, and the trio finds themselves in a mess of conspiracies and murder.

While the premise seems like your standard dystopian noir, Sunday Gold immediately distinguishes itself through its visuals and gameplay. The former will definitely catch your eye first. Character designs are highly stylistic and reminiscent of classic comic books, a theme continued in the game’s cutscenes and combat animations. Even sound effects get the comic book treatment, appearing on screen as onomatopoeia. It all looks incredibly stylish, especially the gorgeous character portraits that display during major conversations.

Exploring Sunday Gold’s static but attractive environments seems to be standard point-and-click fare at first. You click on an item of interest to have a character move to, examine, or interact with it. But here’s where the turn-based RPG part comes in. Each of your three anti-heroes has a pool of action points, or AP, which they must spend in order to interact with objects. Every character also has a particular skill only they can perform, such as Frank’s ability to pick locks or Gavin’s hacking tool. In addition to requiring AP to use, these skills also involve a brief mini-game unique to each character. These mini-games are simple enough, but executing them successfully can sometimes feel a little confusing or unfairly difficult . After you’ve exhausted everyone’s AP or have nothing else to do, you can end your turn, which replenishes your AP, advances time, and may cause a change in circumstances. For example, guards may appear and engage you in combat.

Battles in Sunday Gold are also turn-based. Characters use AP to attack enemies or perform special skills, such as healing or buffing allies. When a character runs out of AP, they can use the guard action to replenish it, reducing incoming damage and allows them to dodge special charged attacks. As a result, combat is mostly about managing AP and exploiting enemy weaknesses while keeping your party healthy, but there is an additional twist in the form of composure.

Each character has a composure meter that reflects their current mental state. Certain actions, both in and out of combat, can improve or worsen this stat, and the lower the meter goes, the more distressed a character becomes. This can lead to things like reduced stats in combat, time limits on action selection, and even confrontations between characters. You can use items to manage composure, but most consumables have side effects, so you have to weigh the pros and cons. One of the freakiest things about this system is that when a character becomes sufficiently stressed, they start to hear whispers of self-doubt and can have trouble concentrating, which manifests for the player in the form of distorted text that can sometimes interfere with a mini-game or make it harder to read an email.

As you triumph in battle and complete objectives, your party gains experience and levels up. Each level provides a character with new skills and points they can use to upgrade and enhance existing skills. Some of these skills give characters new moves they can use in combat, while others provide tools for exploring environments or making mini-games easier. Progressing through a character’s skill tree to the very end also provides them with a capstone skill, and I’m interested to see how these special moves will work. In a convenient and player-friendly move, Sunday Gold allows you to respec skill points for free as long as you are at the trio’s base of operations, so you can easily switch things up if you find the current setup isn’t working for you.

Last but not least, Sunday Gold features voice acting for its major cutscenes, and so far, it all sounds great. The music is also quite good, particularly the battle themes, which have great beats to them and perfectly suit the game’s overall style. As for control, your only option is keyboard and mouse; there is currently no gamepad support, and given the game’s point-and-click nature and PC-only release, this seems somewhat unlikely to change. The controls mostly work well, but there are times when they seem overly sensitive, like during Sally’s breathing mini-game or when selecting whom to give an item to in your inventory. Hopefully, these issues get ironed out by the time the game is released.

Sunday Gold has the potential to be a truly unique fusion of two genres — actually three genres if you include the comic book influences. It oozes style, it’s fun to play, and the story is interesting enough to keep you going, even if it doesn’t do anything terribly unexpected (so far) for a game set in a dystopian near-future. I’m looking forward to learning more about this one when it comes out later this year.