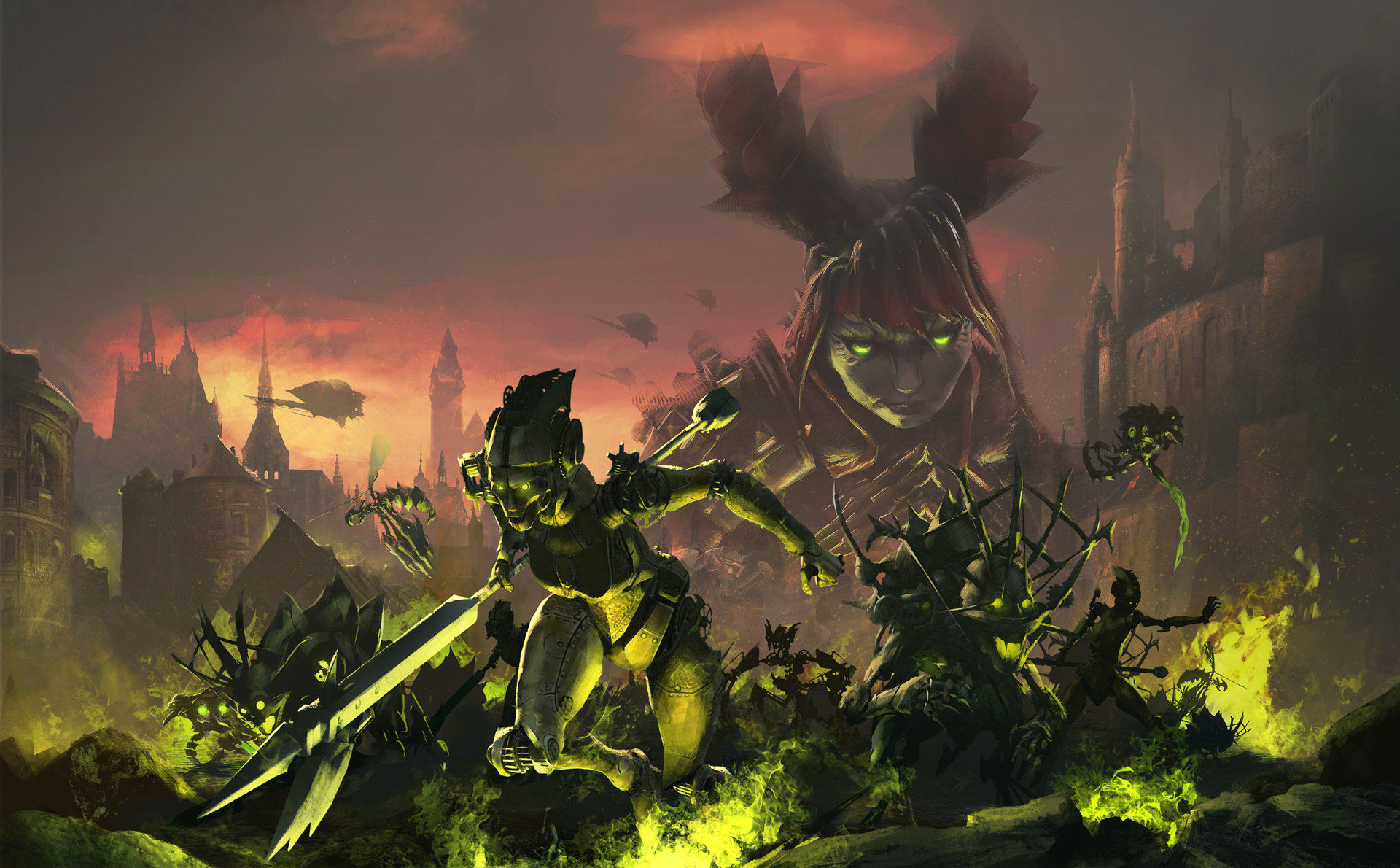 Guild Wars 2’s rerelease of Living World Season 1 content continues with Clockwork Chaos. I had been looking forward to this one, as it introduces my favorite Guild Wars villain, Scarlet Briar. Scarlet has essentially been absent from the game since Season 1 content ended in 2014, so I was psyched to play through her plotline again.

Clockwork Chaos begins with the Queen’s Jubilee, a celebration of human resilience in the bustling city Divinity’s Reach. I loved seeing the balloons and decorations around the crown pavilion, where the main event of the ceremony awaited.

The ceremony kicks off in earnest with a mock fight between Captain Logan Thackery and humanity’s newest invention, combat automatons called Watch Knights. It’s not long before things go wrong. Aetherblade pirates attack the ceremony via a portal, and Scarlet herself makes an appearance to attack the queen and kidnap a noble.

Clockwork Chaos is one of the shorter Living World episodes, consisting of only a few quests, most of which are brief. You can clear the whole thing in a couple of hours. The gameplay is standard Guild Wars 2 fare, in that most of the quests just involve killing a bunch of Aetherblade Sky Pirates, followed by a boss.

The boss fights primarily lack unique mechanics, barring one where you have to guide an enemy into cannon fire to break her shield before you can hit her. This was disappointing coming off of Sky Pirates, which used this exact mechanic right down to the cannon balls and sported unique mechanics in other boss fights as well. I like the shield breaking mechanic, but I’d appreciate a little variety in how you break the shield.

The episode culminates in a fun boss fight where you go toe-to-toe with Scarlet, who throws a smorgasbord of projectile and area attacks for you to avoid while trying to get close enough to damage her.

While the gameplay of Clockwork Chaos isn’t the best Guild Wars 2 has to offer, it makes up for it with the charming characters. There’s lots of quippy dialogue between Braham and Rox, but the show’s real star is Scarlet.

Throughout the episode, Scarlet is constantly poking fun at you dealing with her automatons in a way that manages to be funny without getting annoying. Clockwork Chaos does a brilliant job at portraying her as a delightfully evil villain.

My favorite moment was when you finally catch up to Scarlet; she has a hostage in a giant pot over a fire. What follows is an encounter where you have to juggle fighting her automatons and putting out the fire while she uses a flamethrower to reignite any fires you put out. It’s easily the episode’s best encounter, and it does a great job of establishing Scarlet as a cruel villain that can also make you laugh.

Right in the middle of the episode is a brief non-combat mission that involves investigating the locals that saw Scarlet’s attack on Divinity’s Reach and finding the parts to build your own portal. I enjoyed this section, as it provided a good reason to return to a map I hadn’t frequented in a while and broke up the combat sections nicely. I really would have liked it to be a touch longer. Guild Wars 2 has such a lovely world, and I love quests like these that give you an opportunity to interact with regular citizens of Tyria.

Overall, while the combat sections of Clockwork Chaos are a little dull, it does a great job of introducing one of the games’ best villains. It’s a must-play if you are following along with the Living World Season 1 content, and I’m really looking forward to what comes next when we get into some of the episodes I missed the first time around.