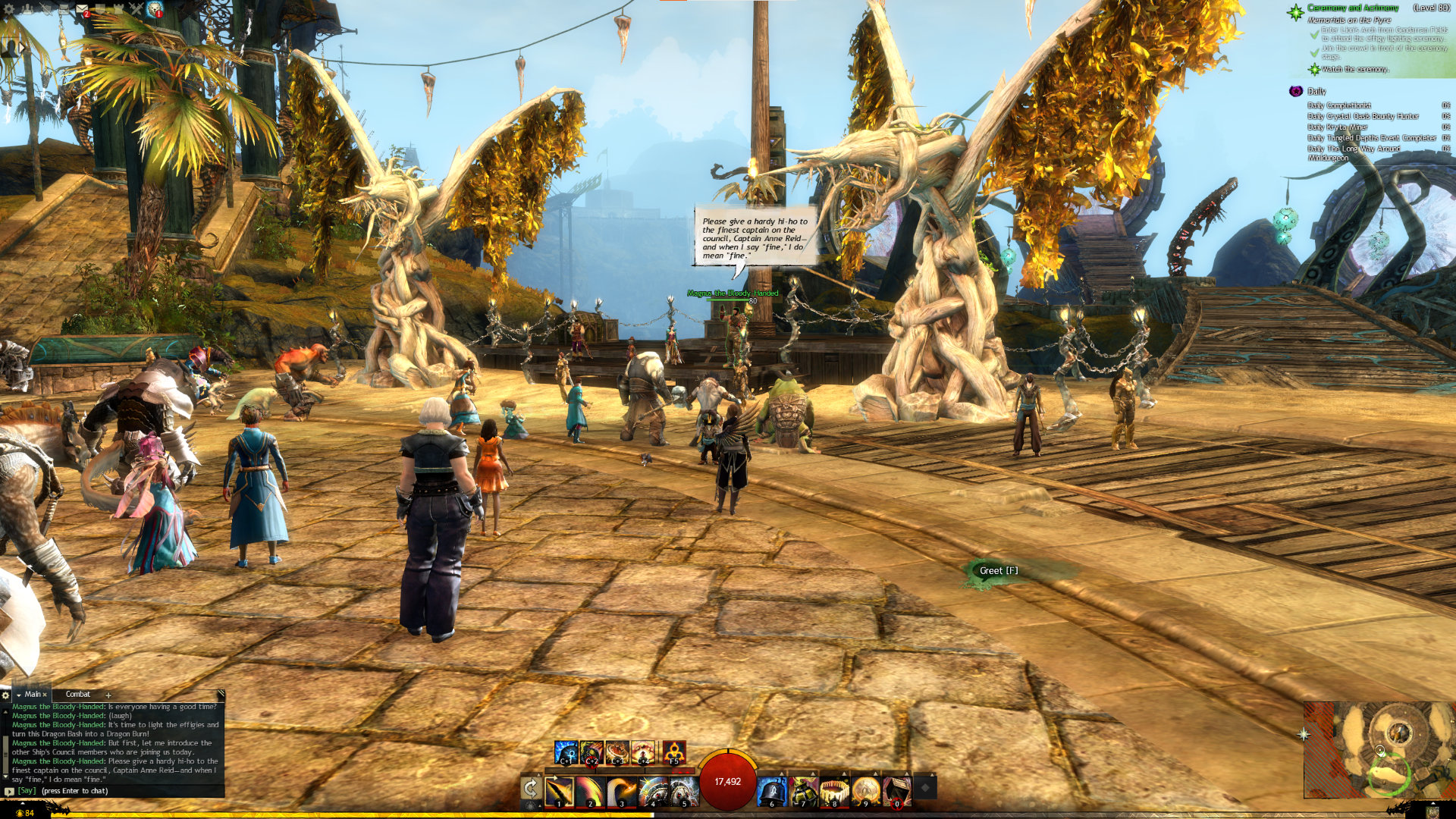 Guild Wars 2 is one of the most approachable MMOs on the market today. A new player can get up to max level and score some late-game viable equipment in a matter of weeks. The only black mark on Guild Wars 2’s accessibility has been its story. The first season of the game’s Living World, which introduced many core plot hooks and characters, was only playable for people that were active when they were released three expansions ago. Since then, players have had to make do with an in-game summary cutscene that lacks the same weight as playing the story yourself.

Fortunately, ArenaNet has blessed new and returning players like myself by rereleasing Season 1 of Guild Wars 2’s Living World content. The second episode, Sky Pirates, was released on May 24, and I had a chance to play through it this week.

Sky Pirates begins with your adventurer receiving a letter from the enigmatic “E,” warning that participants in the upcoming Dragon Bash celebration are in danger. Heading to the Dragon Bash yourself kicks off a series of events that ends with you investigating a murder alongside a private detective and raiding a secret pirate hideout alongside a Lionguard inspector.

My favorite part of the Sky Pirates Living World episode was the opportunity to revisit the old version of Lion’s Arch. Guild Wars 2’s hub city has changed so much since Living World Season 1 that I had basically forgotten what it used to look like. Having the chance to run around the venerable old place gave me a wave of nostalgia. Beyond nostalgia, you can also use mounts and gliders in this old version of Lion’s Arch, allowing easier access to spots on the map you may not have reached when this map was released.

The Sky Pirates missions take you through several base game maps not recently used, such as Snowden drifts and Gendarren Fields. The map you spend the most time on is Bloodtide Coast, and it was nice to visit there for something other than fighting Admiral Taidha Covington.

While I enjoyed traversing some familiar old haunts, the missions Sky Pirates had me completing on these maps were a mixed bag. Given that this was one of the first Living World releases, it feels a little dated compared to the more engaging gameplay Guild Wars 2 offers in its more recent releases. You spend a lot of time in Sky Pirates warping from place to place and investigating NPCs, who often do very little to move the story forward.

The investigative portion of Sky Pirates makes use of Guild Wars 2’s personality system. As you interrogate or persuade NPCs, you often get multiple dialogue options that are associated with your character’s charisma, ferocity, or dignity. Which option you choose can influence how the NPC reacts, but the story plays out the same and the NPCs take the same actions regardless of which option you choose. While I appreciate that the dialogue options allow for a little more roleplaying, they feel hollow when you know they don’t make much of a difference.

Sky Pirates picks up during its finale, in which you raid a secret hideout. This instanced section of the game involves electric floor tiles for you to avoid, computers to hack, and a pair of bosses to fight. Both bosses have a fun mechanic to deal with. The first boss fights you in an arena with rotating electric barriers you must avoid while fighting. The second is a pair of bosses that require you to bait one enemy in front of the other’s attacks to deal damage. Each boss is engaging without being overwhelmingly complicated.

The plot of Sky Pirates is mostly exposition for future Guild Wars 2 Living World content. The Dragon Bash and ensuing investigation bridge the gap from the end of the base game to the start of a new story. Sky Pirates also introduces several key characters, some of whom are still relevant in the current Guild Wars 2 story.

The writing is charming, and I particularly enjoyed the writing during the investigation portion of Sky Pirates. The private detective you work with first appears in a noir-style vignette that sets the tone for both the character and the upcoming quests. Additionally, while I wish the dialogue options were a little more impactful, the responses were always entertaining.

All in all, the gameplay of Sky Pirates is a mixed bag, but it finishes strong and is supported by a fine detective story that introduces many beloved Guild Wars 2 characters. The whole episode is only a few hours long, and it’s critical to play if you want to get into Guild Wars 2’s story from the beginning.