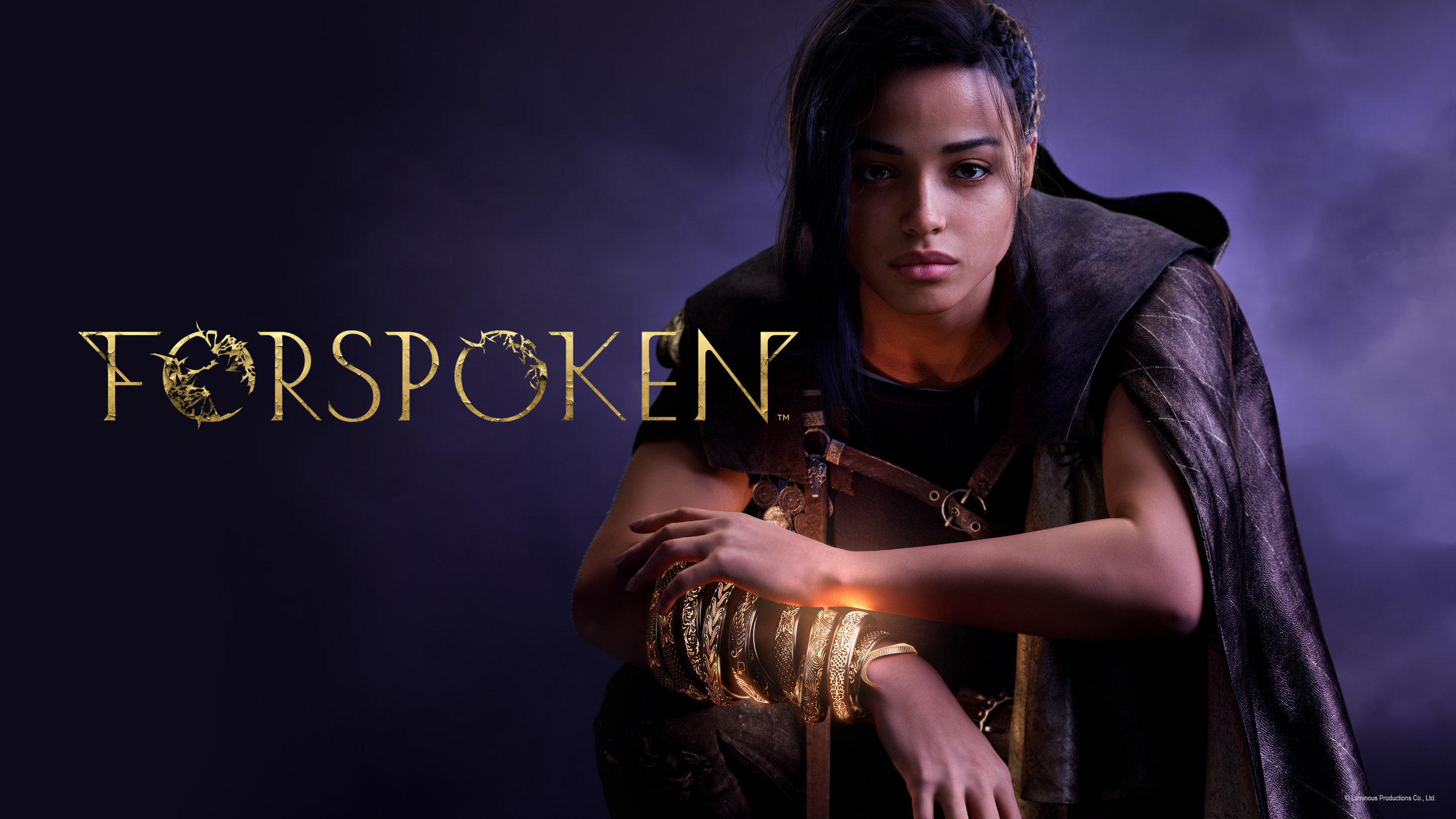 Thanks to the lovely people at Square Enix, I was invited to an event last week where I got some hands-on experience with the soon-to-be-released Forspoken. I also had the privilege of speaking to and interviewing Takefumi Terada (Co-Director), Takeshi Aramaki (Head of Luminous Productions/Director), and Raio Mitsuno (Creative Producer) of the Luminous Production development team at the event. You can read my interview with them as a supplemental piece to this hands-on preview. Going into this event, I only had the chance to watch the few Forspoken videos out there, and for the most part, I was both curious about the game and kinda ho-hum on its upcoming release. After attending the event, I can say my opinion on the game took a drastic turn, and I am much more excited to play come its release on January 24th, 2023.

To hop right into my impressions, I got to play chapters 2, 3, and 5, which showed off a decent chunk of the story and gameplay. Chapter 2 starts with Frey, our protagonist, first setting foot in the world of Athia via a portal seemingly near New York City’s Holland Tunnel. At this point, she is wearing Cuff and you are quickly introduced to Forspoken‘s main selling points, “Magic Parkour” and the “Magic Combat” systems. Magic Parkour is exactly what you would expect: magic abilities that allow Frey to run fast, leap walls, jump gaps, and dodge around the battlefield in an almost dance-like fashion. It is a pretty intuitive implication of pressing Circle on the controller. By doing so, Frey sprints in the direction you are heading, and no other input is needed to use the system.

If you are holding Circle, you automatically handle environmental obstacles such as dodging objects and scaling walls. Using it in combat allows Frey to dodge enemy attacks and quickly reposition herself to press the attack. At the start, it’s limited by a stamina gauge which may seem annoying, but during my time playing and frequently using magic parkour, I did not run out of stamina too often, as it fills back up fast. Later in Forspoken, you can definitely increase your stamina gauge, and it seems there will be ways to avoid expending it at all, allowing for an almost infinite sprint. It is fast, fun, and easy to use, as every traversal mechanic should be. You can even upgrade parts of it at certain times, such as the ability to kick back off walls you’re climbing to get an extra boost of height on your jump.

Chapter 2 is also a great tutorial for the Magic Combat system because it pits you against a very formidable dragon boss to proceed. Frey has two ways to use her magic abilities, offensively with a plethora of attacks based on your current magic type or with similarly based support powers. During the preview, I was limited to the starting Earth-aspected magic and didn’t get a chance to play with the others. I can’t wait to do so because what I tried was super fun. Earth has three different attacks tied to it, a burst shot that flings rocks that explode on impact to hurt other enemies, a shield attack that charges then breaks apart in a shotgun-like pattern in front of you, and a rapid-fire machine gun attack. Additionally, holding R2 charges attacks, such as making the burst shot’s rock larger and more potent before hurling it. Holding R1 lets you swap spells on the fly via a slowdown mechanic so you can mix and match.

L2 allows you to use the support spells: growing roots that bind enemies in place, a plant tendril that whips enemies around and sucks life back, or plants that neutralize poison effects. You learn multiple support abilities via the skill tree, then can swap them on the fly like attacks. The drawback is that each support has a cooldown so you can’t spam them. Frey also has a few other tricks up her sleeve. After sufficient use of your support and attack-based magics to charge a gauge, hitting R2 and L2 together grants a super attack for the currently selected magic. She can also melee strike downed enemies via the Triangle button to do large damage and heal herself in the process.

Cuff provides her with an automatic shield which lessens the incoming damage, but can also counterattack via Triangle if timed well to repel enemies. All of this together allows Frey to play very aggressively in combat and makes for a smooth, fast-paced, and enjoyable combat experience. If you do get hit, Cuff’s shield will break and force you to play a little more defensively until it repairs itself, but thankfully repair is fast so you can get back to jumping and firing off magic spells. It’s a very well-put-together combat system, and knowing it’s only a quarter of Frey’s arsenal had me very much looking forward to the other three magic elements to see how they play.

After slaying the dragon, Chapter 2 ends and Frey is quite literally dropped into Chapter 3 and Athia’s only remaining city, Cipal. You learn that the world of Athia has suffered a horrible catastrophic phenomenon known as the Break. 99% of the human population has been wiped out, and only Cipal and its citizens remain. Any living thing, human or otherwise, outside of the city suffers from the Break’s corruption and turns quickly into an aggressive zombie that attacks anything in sight. Frey, who just so happens to be immune to the Break’s corruption, is (understandably) viewed by the citizens as some kind of witch. Forspoken is not an exception to this JRPG trope, and she is thrown in jail as a result. After a nearly automatic jailbreak and stealth section, Frey can explore Cipal a bit before going to collect more information on the Break outside of Cipal to figure out what is going on. She’s pretty much the only one who can do so.

Cipal has a bunch of sites to see and a few sidequests known as detours. One of them has you follow an adorable cat around to collect some items. In case you are wondering, you can pet the cat as much as you’d like at the end. Eventually, you can also explore outside and have a bit of freedom to explore the first sections of the world. The world outside of Cipal is vast and has a bunch of destinations, including mini-dungeons, safe houses to craft at, packs of enemies to fight, terrain to parkour over, and loot to be found. Magic Parkour really makes it fun and fast to explore. This exploration allows you to get to know Frey, Cuff, and the world of Athia a bit more and is a nice change of pace from the frantic tutorial in Chapter 2. Speaking of Frey, though, I want to take a few minutes to discuss why I immediately enjoyed her as a main character.

As someone born and raised in New York City, I rarely get to play an RPG character from my hometown. With a place as popular, big, and diverse as New York City you would think there would be a few, but the only one I can think of is Aya Brea from Parasite Eve, and even then, Aya is actually from Boston. Frey is a joy for someone like myself. She is witty, thinks on her feet, and embodies the New York attitude. I found myself having thoughts just as Frey would say them out loud in game, and it put a smile on my face. Ella Balinska brings her to life, and I enjoyed her reactions and little jokes that hit home if you know New York City and us New Yorkers well. It really reinforced my stance that representation in video games on any level matters so much, and we need more of it! I know a bunch of people will enjoy Frey a lot if you give her a chance.

Chapter 3 comes to a close as you return with the materials you set out for, only to find Cipal under attack from one of the main antagonists, the Tantas. As the former rulers of Athia, the Tantas were once benevolent and loved by the people, but for whatever reason—either because of the Break or whatever caused it— the Tantas have become an oppressive force. You do battle with Tanta Sila’s minion in a boss battle to close out the chapter. Even though Frey has saved the day, the damage has been done. Without spoiling it, Frey finds the motivation to take down the Tantas, help the people of Cipal, and hopefully save the world of Athia during these scenes.

With that, we shifted to Chapter 5, which dropped us in Tanta Sila’s domain and below her castle. You quickly find yourself using Magic Parkour to scale the mountain to begin your assault on the keep while being bombarded by artillery fired from trebuchets. This section of Forspoken was pretty fun; you can pick and choose how you want to scale the mountain and the castle before heading inside. It’s also an introduction to more magic parkour features set up for after you defeat the boss of the area and get the second (Fire) set of spells.

There were some detours in the area, but seeing as I was running out of time, I instead made a beeline to fight the boss before my time ended. The chapter obviously closes with a fight against Tanta Sila, which has multiple, progressively more difficult phases. Sila, who is aspected with fire magic, attacks with a blazing sword, summons minions to attack you, or sets the ground on fire, which forces you to Magic Parkour to higher ground. It was literally playing the “ground is lava” game we all probably played as kids, which I got a good laugh at. It was a pretty fun and challenging boss with some great visuals and a great soundtrack.

Unfortunately, that’s all of Forspoken I was allowed to explore, but feeling that way shows I had a blast while playing it. Forspoken has gone from a game I had casual interest in to a game I want to play as soon as possible. I am a sucker for fast-paced games with cool movement systems and main characters from New York City. What can I say? As of this writing, a demo is available to download on the PlayStation Network for PS5 owners. I definitely suggest you give it a chance if you have been on the fence about it. Forspoken comes out on January 24th, 2023, and you can expect our game review to follow.