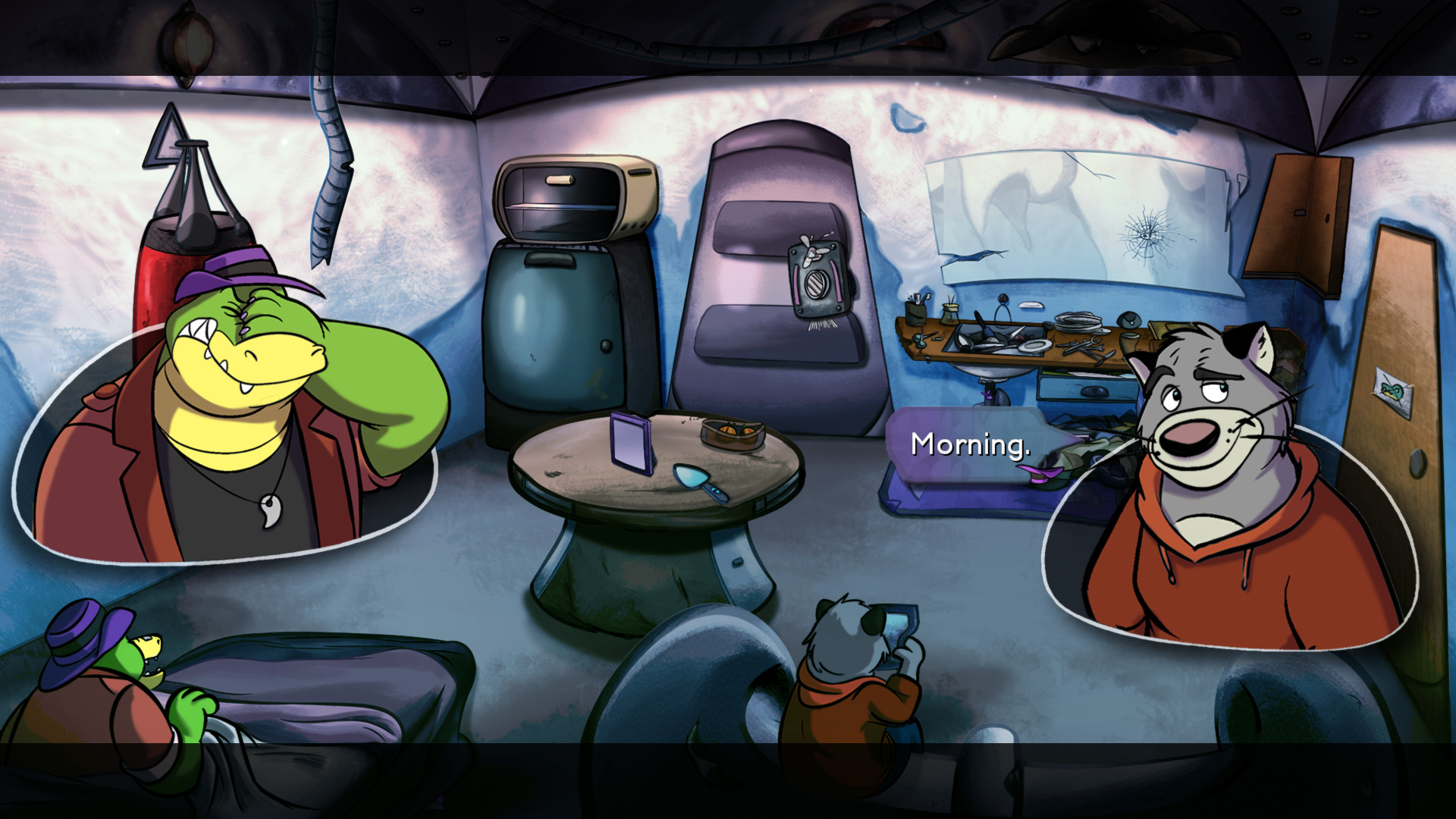 Have you ever found yourself playing a classic point-and-click game and thinking, “Golly. That dastardly pirate and/or gangster over there really needs a surprise punch in the snout”? BROK the InvestiGator, brought to you by the developer of Demetrios, will allow you to do just that. With graphics resembling a colorful mix of Don Bluth films and Deponia, BROK mixes traditional point-and-click gameplay with beat-em-up combat, RPG elements, and disgruntled alligators.

BROK is set in a polluted future world inhabited by anthropomorphic animals; as in many dystopic tales, the rich enjoy their extravagant lives in a protective dome, while everyone else suffers down in the grime. Our title character, Brok, is a fist-fighting alligator detective who formerly lived in the dome until the tragic death of his wife. From Chapter 2 onwards, you’ll be able to switch between Brok and his feline stepson Graff, in separate but linked quests. Will our two heroes ever be able to return to the dome? And was the death of Brok’s wife really just an accident? Let’s beat up some angry, oversized sewer rats and find out!

BROK the InvestiGator offers different ways to progress so that no point-and-click fan will be left out. At any point during the game, you’ll be able to switch between action mode and a traditional adventure mode; decide whether to proceed using your brains or your fists. Not surprisingly, this freedom will result in one of several different endings based on your choices. Combat scenes themselves are fully interactive, and include special moves, restorative items, and an RPG-style experience and leveling system. If you prefer to skip fights altogether, you can start the game on “story mode,” which will exclude all action scenes. Of course, you may still punch and kick objects in the environment, if that pleases you.

In addition to the action-packed beat-em-up scenes, BROK includes interrogation minigames that will have you combining clues found throughout the game to discover what your suspects are hiding. Meanwhile, you can rest assured that there will still be a plethora of traditional point-and-click style challenges to solve, including inventory-based puzzles. My favorite!

BROK’s base gameplay and writing are nearly finished; the funds raised will be used to commission more artists and bring in additional help to polish things up. Though the campaign’s initial target has been reached, stretch goals will add further improvements such as context-appropriate “Game Over” messages and a couch co-op mode; round up some extra help for those fight scenes!

Overall, BROK the InvestiGator looks like it’s shaping up to be a unique addition to the point-and-click genre; the addition of real-time combat and RPG-style stats reminds me a little of Quest for Glory, and the artwork makes me want to re-watch some of my favorite animated classics. Let’s put on some boxing gloves and follow this investi-Gator!