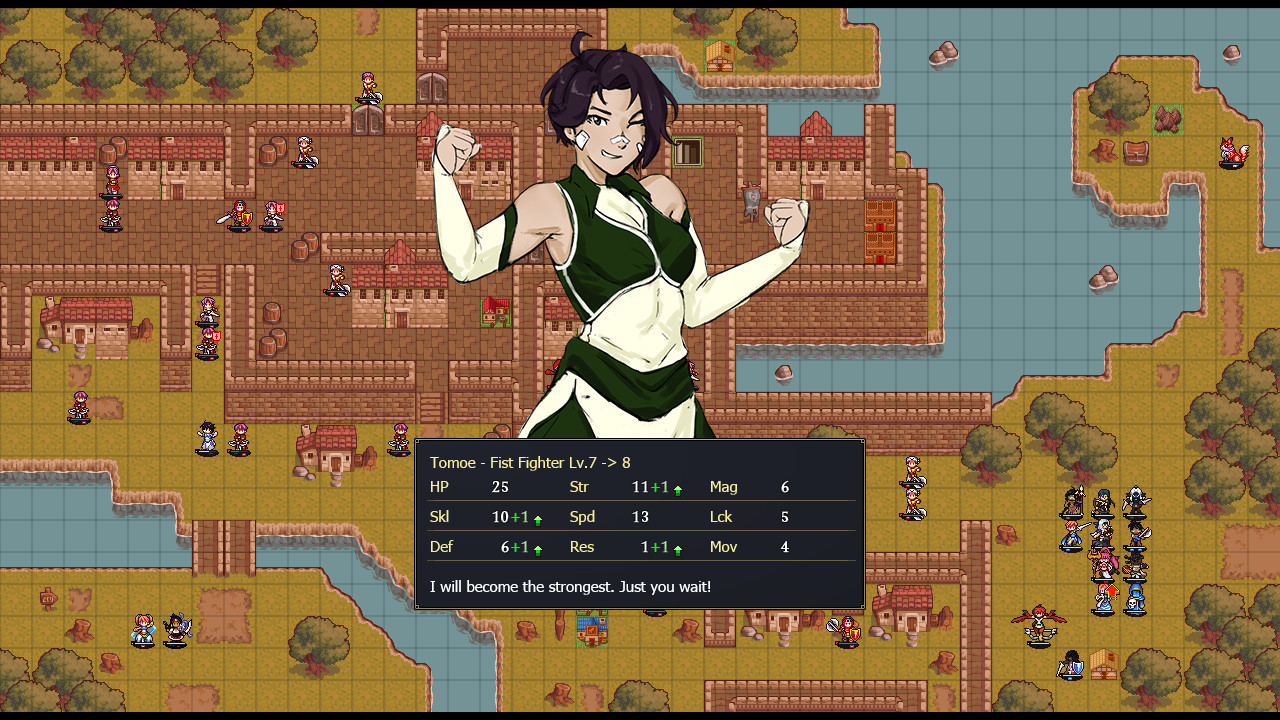 Today’s weather report calls for wind. Specifically, it’s a gale force wind directed at your home computer. The debut project from Montreal studio BlindCoco, Gales of Nayeli, brings you a strategy experience inspired by Fire Emblem and Shining Force. It features a roster of diverse characters, dozens of class options, and an in-depth relationship system.

Our tale opens with the land of Iuven under threat; dastardly denizens have been attacking villagers from all angles, and even friendly fauna have turned violent. In one particular forest village lives our heroine, Nayeli, along with her father, Chief Tuskalusa. Unfortunately, Nayeli’s day is about to be completely ruined. Upon meeting a suspicious stranger in the nearby woods, Nayeli must leave her home and head out into the wider world to stop the growing danger before it’s too late. Thankfully, you won’t have all of Nayeli’s responsibilities on your shoulders, as you’ll instead be playing an original character assisting our heroine. Phew.

Choose one of four starting classes for your avatar, and build up a small army from over 35 recruitable characters. You’ll have a team diverse in races, abilities, and personalities, including an adorable squirrel girl and a few feathered fighters. Party members each have their own unique base class and options for advancement, with over a hundred classes available across all characters.

Battles take place on a grid map covering a variety of terrain, with Fire Emblem-style animated close-ups during certain moments (such as finishing moves). Beyond the usual attacks and magical skills, you’ll complete missions using creative tricks such as burning your opponent’s provisions or sending them nasty fake letters. I wonder if they contain swear words…? Thankfully, you won’t have to deal with permadeath in your ranks, except during key moments where battle injuries and story decisions make a fatal difference.

Speaking of story decisions, your choices during the game (including how you interact with party members) will affect both the plot and the skills you’ll learn; these may even open up some new class promotions for certain characters. Developing friendships and romantic relationships throughout your ranks allows units with strong bonds to receive combat bonuses when standing close together. They may reward each other with gifts or new skills. Just as in real life, relationships between characters may draw the attention of their friends, offering new dialogue and story tidbits. Gotta hear all that juicy gossip!

Gales of Nayeli will see a full release as it has already reached its funding target. Yay! Additional Kickstarter funds will go towards extra polish, and some stretch goals remain, including cutscene illustrations and plenty of post-game content. Gales of Nayeli looks like a great choice for strategy fans who may want something a little less intense than Fire Emblem or who want to follow the adventures of a cute and diverse cast. I hope Nayeli has room for one more recruit; she can count me in!