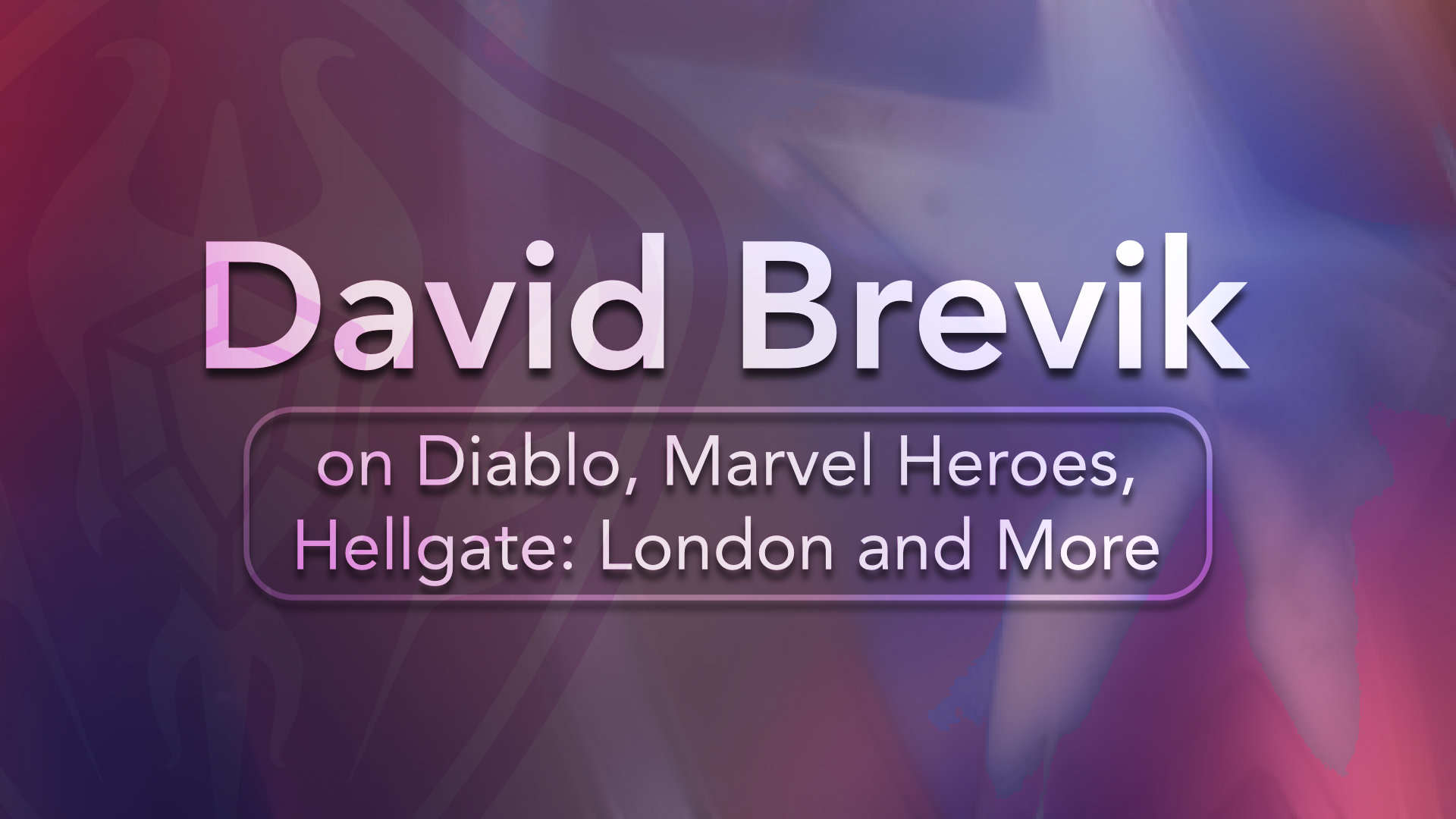 When we say David Brevik has been around, we mean it in the best of ways: From his work on the classic Diablo II, to Dungeons & Dragons Online, Hellgate: London, and more, we chat a bit about the man’s history, his process, and his work today at Gazillion Entertainment on Marvel Heroes.

RPGFan: Older gamers probably know you best from your work with Blizzard on Diablo and Diablo II, but you’ve obviously been involved in much more than that, including games like Hellgate: London and Dungeons & Dragons Online. How did you get your start in a video games career?

Brevik: I started working in video games professionally in 1991. I worked at a very small start-up making an Atari Lynx game called Gordo 106: The mutated lab monkey. I was unable to finish the game after some financial troubles with the startup. From there, I went to Iguana Entertainment where I made Super High Impact Football and then helped work on a variety of titles there: Aero the Acrobat, NBA Jam and others. In 1993, I left Iguana and started Condor with the Schaefer brothers. They were artists I worked with at my original job. Condor became Blizzard North, and the rest is history.

RPGFan: I know this is probably like picking a favorite kid, but out of all the games you’ve worked on prior to Marvel Heroes, what was your favorite to work on and why?

Brevik: It’s hard to choose just one. Obviously both Diablo and Hellgate are very dear to me, since I was so involved in their creation. That said, there hasn’t been a project that I disliked or wasn’t proud of in the end. I’ve enjoyed a varied career, working on sports titles, RPGs, strategy games and MMOs.

RPGFan: What are some of your best memories in your career in game design?

Brevik: The number one memory that stands out is a Diablo memory. Originally, Diablo was a turn-based game. It was largely modeled around a rogue-like game called Angband. All of those games were turn-based, and I played them for long, long periods of time. A bit into the development, the idea of turning Diablo into a real-time game started whispering around the office. I resisted for a while, but eventually I decided to give it a try, and I remember it like it was yesterday. I spent the day converting the code to real-time, and the first time I pressed the mouse button, the warrior walked over and smashed a skeleton apart in a smooth and satisfying motion. *gasp*! The clouds parted outside, a ray of light beamed into the office and angels sang. It was the birth of the ARPG.

RPGFan: What advice would you give to aspiring young folks looking to get into the industry?

Brevik: I get asked this often and I will give the same advice: make a game. The best way that you can do any art form is to practice and learn by actually doing it. If you are a programmer, code up a prototype using lines and circles. If you are a designer, mod an existing game. If you are an artist, create some art by modding an existing game. Or best yet, get together as a small group and work on a project. Indie development has never been easier. It’s very similar to someone aspiring to be a writer; write a book or a short-story, but write. If you want to make games, make a game. You will learn a lot and have something to show off when you apply to any job.

RPGFan: Tell us how you initially got involved in Marvel Heroes.

Brevik: It was pretty well known that I’m a big Marvel fan and that I have wanted to do a Marvel/Diablo-type game for a while. When Gazillion called, they said they had acquired the Marvel license and heard that I would love to make a Marvel game. I jumped at the opportunity to be the Creative Director on the project. After a while, I transitioned out of the Creative Director role and became the CEO of the company.

RPGFan: For fans of games like Diablo/Torchlight and other ARPGs, what differentiates Marvel Heroes in terms of the gameplay?

Brevik: There are several major differences, but the one thing that Marvel Heroes has that no other ARPG has is that it is an MMO. You are in the world with thousands of other players together. You can enter any area, you will be in there with a group of people doing their own thing. There are also zone-wide events to work together in completing. Now this allows us to do unusual things, like creating guilds and we recently added Raids. No other ARPG that we know of has Raids.

RPGFan: You’ve been out for over a year now, but describe for us what the feeling of release day was like for Marvel Heroes with the expectations that come along with a big license like this.

Brevik: I have nothing but shivers when I think back on those rough few days. We all had such high hopes and high expectations, but we were not really ready, and it showed. Leading up to the launch day, I had very little sleep. I slept a total of around 10 hours the week before launch. There was a lot of relief when the product launched and things looked pretty good for the first few weeks. After a while, we realized where we were and vowed to improve everything. We admitted our shortcomings and strove to improve. After a year, you can see that the game has much improved and we are very proud of what we have done.

RPGFan: What are some of your favorite improvements over the past year, and what can we expect going forward?

Brevik: There are so many great improvements in the last year; changing the ability to earn the hero you want; new gameplay modes like Midtown Manhattan and X-Defense; many, many performance enhancements and so many new types of items to collect and chase. The game is night and day different than a year ago.

RPGFan: Tell our readers why they should take Marvel Heroes for a spin.

Brevik: It’s really fun! And it’s free. Go register at marvelheroes.com and download the game. That is all it takes. We change and improve the game all the time. We have weekly events and new heroes each month. We interact with the community all the time. I stream the game many times a week. We love our game and I think it shows.

RPGFan would like to thank David Brevik for taking the time to conduct this interview.