Genshin Impact: Zhongli’s Lament and The Troubling Militarism of the God of Contracts 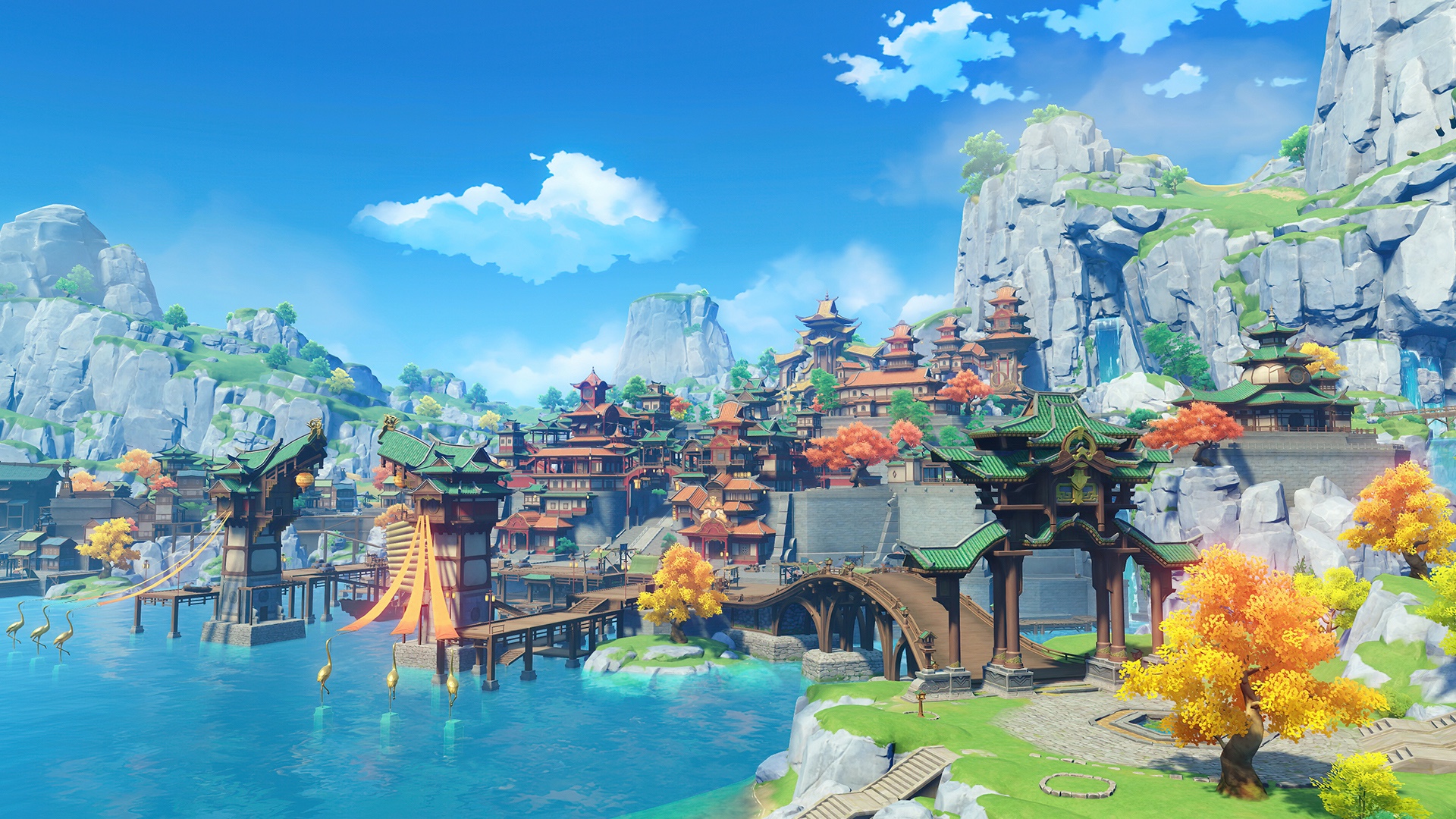 Genshin Impact has been a source of many surprises. Even on a surface level, it delivers on gameplay in a way that perhaps no free-to-play single-player game ever has. Weapon types, elemental effects, and terrain provide ample thread with which to weave spectacular tactical tapestries, all within a real-time action combat system. But as one digs deeper, message after message regarding our own world waits to be discovered. It begs the question: is miHoYo, a company that finds itself obligated by law to adhere to certain restrictions, commenting on the world with their game?

The exact truth of this is not known from current evidence, and probably never will be, but it provokes pondering nonetheless. Consider this excellent quest available in one of the two currently reachable nations in the game: Liyue.

The long history of Liyue features many interactions between gods and humans, many cycles of prosperity and ruin, and many cataclysmic shifts in its geography. It has blasted fragments across every cliffside, into the depths of its harbors and bays, and under every foot to be trodden by its oblivious yet devoted citizens. Liyue’s status as the Nation of Contracts — symbolized by its national zeal toward Rex Lapis, the Archon of Geo — has imposed on its people the comfort of order and structure as well as the terror of bureaucratic command and stricture.

In this vast and rugged land, ancient ruins are not merely constructions of bygone human endeavors but are one and the same with its highly varied topography. To demonstrate how this is so, look at the Guyun Stone Forest, a series of towering crags jutting out of the sea off Liyue’s coast. In a land where legend is history, these are understood to be the great spears that Rex Lapis brought down upon his godly foes in a great battle. The bodies of his rivals are still gruesomely pinned underneath. Thus, the very landscape of this region is as much a dilapidated ruin as the forgotten, long-decayed temples and settlements.

It is said that one of the active gods during this time of warfare abstained from conflict. She sought to spirit her devotees away to a safe corner where the calamity could not reach them. This was Havria, the God of Salt. She still has disciples within Liyue who work in the salt production unions, though she is no longer active in their lives.

The phasing in and out of activity is a natural part of godly life in Teyvat. Rex Lapis has recently chosen to end his godhood and manifest himself on earth as Zhongli, although none but the Adepti (the supernatural guardians of the citizens of Liyue) and the Traveler (the player character) know that.

However, when an archeologist approaches Zhongli and the Traveler to discuss the history of the land, she reveals that she believes Havria was assassinated by Rex Lapis, who, unbeknownst to her, is the handsome gentleman she is talking to. She is very invested in discovering the truth behind the death of this peaceful and gentle deity and invites Zhongli and the Traveler to help her conduct an expedition to find it.

Actually, an archeologist from the antagonistic and autocratic Sezhnayan government seeks out Zhongli specifically for an expedition of his own. It’s quickly revealed that this man is morally compromised and seeks to only enrich his nation and himself by discovering relics, but, as he is the least interesting part of this story, I will mostly ignore him for my purposes here. Suffice it to say, all five — including Paimon, of course — would-be archeologists embark to Guyun Stone Forest.

It is strange to hear Zhongli, the deus incognito, speak about himself and his past life in the third person. During this geographical tour he guides, one senses a simultaneous longing and hesitancy to confess the truth of his domination over other divine beings during the time of conflict. The Guyun Stone Forest is but one reminder of the carnage. Here the party embarks to find any artifacts that may have washed up to the shallow waters or the shore before embarking to Sal Terrae, the last known settlement of the god of salt.

The tragic reality is immediately apparent. Human forms in a prayer position made entirely of salt are found all over the domain. Zhongli is quick to point out that these are not statues, but people. He doesn’t reveal what has made them this way, but it’s clear he knows.

In this domain we find two artifacts: a bowl half-filled with salt (or half-emptied?) which never empties, and a ruler that, when stuck into the ground, summons a whole mound of salt. This allows Zhongli to show how seriously he takes contracts. When the unsavory Sneznayan archeologist wants an artifact that the contract does not allow him to have, Zhongli basically sentences him to death, after which we must fight the Sneznayan. We don’t end up killing him, driving him away instead. Still, Zhongli has zero chill.

The archeologist who is left confesses to being a follower of the god of salt. She intends on revealing that Rex Lapis murdered Havria out of jealousy. Zhongli invites her deeper into the domain, promising answers.

Here we see a sword snapped in two. The follower of the god of salt insists this must be the murder weapon and wants to take it to try to restore her god. Zhongli does not permit her, citing a previously agreed-upon contract. She says she’ll take whatever punishment necessary to prove her devotion. Zhongli, instead of killing her, reveals the truth:

Havria, the god of salt, was not as powerful as this devotee believes she is. During the conflict, she refused to participate, instead attempting to take her devotees into a safer domain, away from the conflict in which humans were simply collateral damage. Her own devotees, realizing she couldn’t protect them, killed her with the aim of escaping to the god of geo’s lands as refugees. Those in close proximity to the murder were trapped as salt statues.

This is too much for the devotee to bear. She runs off in distress, and that’s the last we see of her for now. What is striking is the reason for her distress. This revelation heavily emphasizes the “weakness” of Havria, who abstained from conflict and sought to protect her people. The devotee also perceives this weakness. Instead of being proud that her deity offered an example of pacifism and integrity to the bitter end, she feels betrayed by this supposed weakness.

It is indeed shocking the value these characters place on outward strength and dominating ability over inner strength and virtue. Zhongli very much appears to be on a journey of contrition, but his militaristic adherence to law and order still translates to his current actions and attitudes. In the ruins, he displayed no leniency whatsoever, to the point of being willing to take a life.

The pinnacles of virtue in the Liyue’s culture are success in business and adherence to contracts. Both are signs of piety, as the god of contracts commands strict adherence to any earthly or heavenly contract. Notably, he also is the creator of Mora, the magical currency used among all the nations of Teyvat. Thus, the earthly government of Liyue, the Qixing, preside over all trade in Liyue, be it internal or international. This, along with the history of this nation’s deity, show how inextricable trade is from warfare.

Genshin Impact may have a message for our real world, one in which economies are engineered to be fueled by destruction and extraction. Violent sanctions are placed on nations of marginalized people to manipulate the markets in favor of the centers of power and open warfare arrives in places with resources to obtain for the very richest individuals. It only makes sense that the wealthiest nation in Genshin Impact‘s world — indeed, the literal inventor of currency — would possess such a brutal history.

To be clear, this history of external clashes driving the internal unease of Zhongli makes him a stronger character. Instead of the faultless gentleman he appears to be, he gives us a cautionary tale about the dangers of ambition. The question of Zhongli gaining any real redemption is a nebulous one. Was he carried away to a desperate battle for survival he did not ask for, or was he an aggressor? It’s not clear if Genshin Impact has any interest in digging deeper into this question, but it stands to move one to awareness.