Immercenary: The Neglected 3DO Cult Classic that Warned Us About Web 3 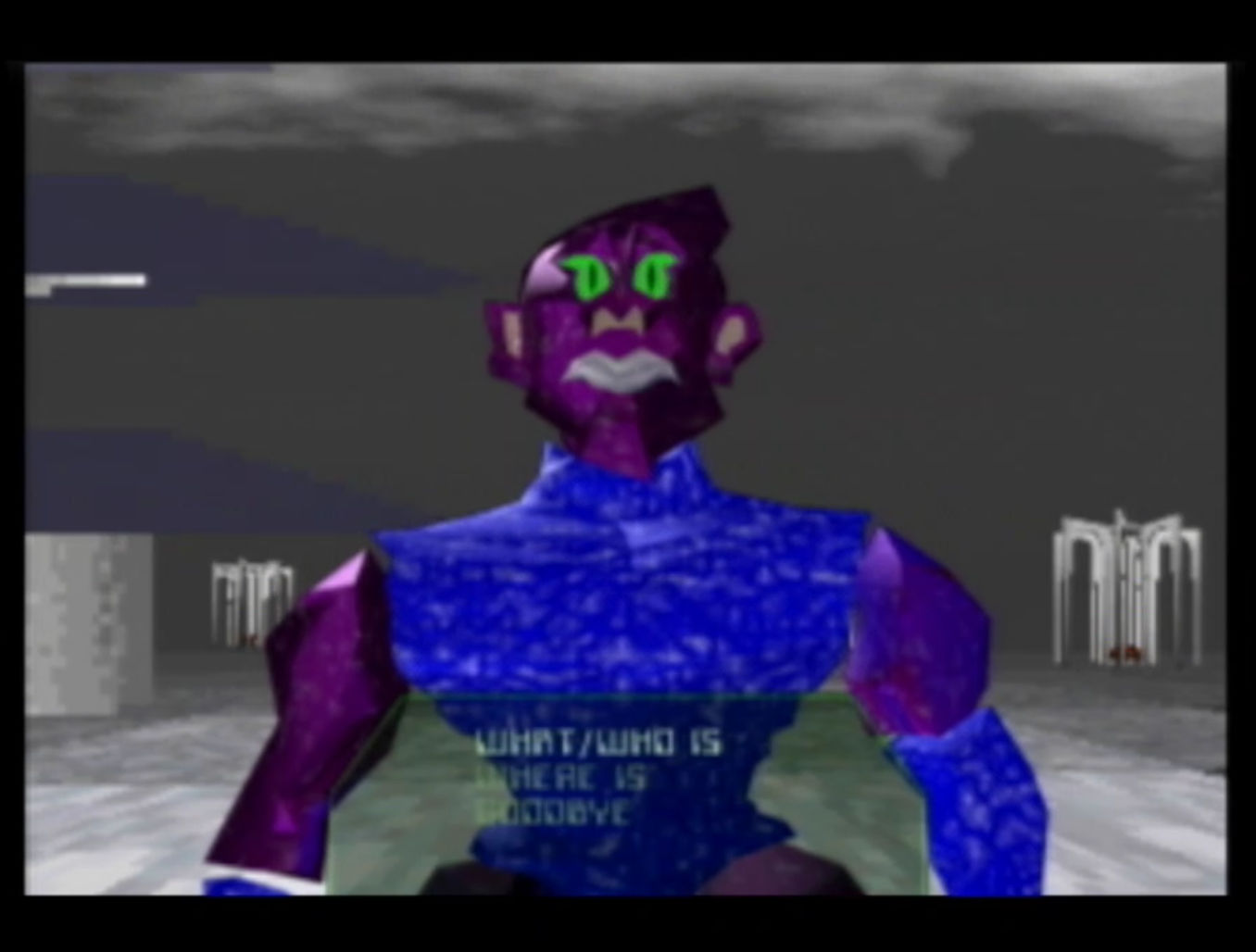 Not much about the Immercenary‘s setting is ever made clear. The whole world of the game is a dimly lit laboratory with large computer consoles and a menacing reclining chair like at a dentist’s office. Two young technicians and a director are your only associates. As you initially enter the lab, the previous agent known as Number Four lies lifeless on a stretcher as medics carry him away. The director calls to you. “Are you ready, Number Five?”

You’re given the briefest briefing imaginable as you’re strapped into the chair. Everything fades to black as you’re tilted back, staring up as bolts of electricity descend upon you.

You wake up surrounded by colorful digital avatars fighting openly in the streets of a strange city. Your only choice is to fight for survival. From a first-person view with a Doom-like control scheme (though clunkier, almost as if you’re piloting your character like a vehicle), you gather items, defeat enemies, and level up your stats in pursuit of your ultimate objective: shutting down this virtual world for good.

Although quaint to say, fiction about abandoning the physical world in favor of a digital one is relevant now more than ever. Even as we look back at a bygone era of pioneering cyberpunk written long before the modern internet or the ability to remain constantly connected to it, the warnings and our response to them are chilling. More frightening, or perhaps puzzling, is that aside from the classics, much of this subgenre peddles in pulpy extremes. Cyberpunk is full of silly parody and surface-level satire, yet many of these previously outlandish predictions have been borne out in real ways today.

We already occupy cyberspace as much as real space. Not in our time spent online, but in the online profiles created for us. Our interests and our tendencies are aggregated without our consent and used to shape what we see online. Furthermore, we are encouraged by algorithms to engage with what outrages us, isolating and alienating us from each other more and more. Now, Web 3 and the metaverse, plucked straight out of the darkest works of Bradbury and Dick, are championed as the technology of the future, ignoring the myriad problems and obvious negative mutation of human culture and psychology they bring.

Our environment is dictated by market forces. The same impetus that drives developers to design apps that keep your eyes on them as much as possible will now push us to leave our lives behind for a digital existence for as much time as possible. Tech companies want to turn real life into a cyberpunk parody as if they read Phillip K. Dick’s work and thought that the dystopias therein were worth striving for.

Immercenary was released in 1995, in an age when cyberpunk as a subgenre was well into its metamorphosis from intellectually-driven doom prophecy to an aesthetic for schlock. Don’t get me wrong, I love superficial cyberpunk schlock — and my deep love for this 3DO exclusive FPS/RPG is proof — but it is uncannily prophetic for a product of this time. It presents a very cheesy dystopian world where seemingly all of humanity is perpetually jacked into the matrix and forced into participating in total virtual warfare. If you die in the game, then, like Number Four, you die in real life.

Less intellectual cyberpunk stories like Immercenary are some of the most important ones to experience right now. Often, they depict a society so far gone that the reader struggles to imagine that their environment could ever be that bad in any perceivable future. This is perfect for us today, especially when it comes to our relationship with technology.

In his short story Ubik, Philip K. Dick depicts a man, Joe, who is unable to leave a room because he lacks the five cents necessary to open the door. Similarly, the architects of Web 3 wish to commoditize everything imaginable and reduce it to a transaction. Blog posts, online accounts, social media activity, and anything else you can think of would require some sort of token transaction. It seems like no one would ever invent a system where you must pay to open a door in your apartment. That’s too silly, yet someone invented a system where you must pay a token to post on your blog.

Thus, the cheesiness of Immercenary is not a hindrance. It’s the game’s biggest thematic strength. The simple concept makes it seem a little unrealistic, but the same simplicity leaves plenty of room for its enduring charm and — if you experience it in 2022 — some unexpected poignancy.

Despite its pulpy nature, it’s difficult to overstate the ambition of Immercenary. Published by Electronic Arts in 1995 and developed by a small team called Five Miles Out (who unfortunately only existed long enough to make this game), Immercenary features an impressively large, surprisingly landmark-rich, and well-realized open city. As a 90s-era depiction of an online virtual space, there are plenty of strange and imaginative sights. There is little cohesion throughout a city that contains disparate architecture, color schemes clashing together, windows tilted nonsensically, and other Angelfire-esque naive visual stylings in abundance. My favorite landmark is the building in the residential district with a giant low-resolution bitmap of a face without a nose plastered across it: quite the sight alongside the normal-looking townhomes and apartments.

Similarly, the other denizens of the city, called The Garden, are a weird blend of visual collisions with each other and within themselves. The fodder enemies are called goners because their avatars have degenerated enough to be reduced down to a very simple abstract polygonal figure. Thus, they are goners. Polygoners. I suppose now is a good time to mention that Immercenary is undefeated in the pun game.

The Killroys are polygonal female figures colored in white and reddish-brown checks. The Torks are twisted blue and purple humanoids that look like a 12-year-old’s first Blender project, and so on. None of them are pretty, but they are dripping in that ’90s computer-rendered charm.

To be honest, these characters are quite reminiscent of many of today’s NFT art pieces. Indeed, they are the inspiration for my writing this. They even, in a way, represent the scarcity NFTs are supposed to have. Each character, including the player, is ranked in The Garden. Your rank is usually an indication of your power. As you kill those ranked above you, you gain in rank as well as power in the RPG sense of leveling up your stats. Therefore, the rarer enemies are usually the more powerful ones, much like how the scarcer an NFT is supposed to be, the more value it’s supposed to have.

You can get up close and personal to these characters in a neutral no-fire zone called DOA-SYS (get it? The Oasis? Pretty good). Here some assortment of characters, including most bosses, hang out. You can talk to them to get more information on items, enemies, and the nature of The Garden.

Not long ago game developers and publishers were shouting from the mountains about how great it would be to add NFTs to their games in the form of skins and so on. Immercenary predicted that tendency quite effectively, with what could be interpreted as a “pay-to-win” system to boot. Rarer “Rithms” being the stronger ones. (That’s what the characters are called. Like algorithms… still undefeated in the pun game.)

Your character in Immercenary is part of a tiny resistance operation to free humanity from The Garden. You’re supposed to rise the ranks and eventually challenge the big bad guy, Perfect 1. According to the folks you can talk to in DOA-SYS, he’s also the creator of the whole shebang. If any who read this are believers of Web 3, I’m sure you’d point this out as a big dissimilarity to the supposed decentralized nature of the blockchain.

Everything on the blockchain is decentralized is it not? While crypto bros love to tell you that, Web 3, metaverse, and other projects on the blockchain are getting centralized like crazy. Venture capitalists fund and control crypto projects, those who invest early and heavily carry great power within those communities, and so on. So not only is it getting centralized and forming new power structures, but often the new power structures are more terrifying and tyrannical than the institutions that already exist in traditional finance, for example. A ranking system or hierarchy inevitably emerges, and we end up with many Perfect 1s surrounded by an entourage of ridiculous NFT avatars.

A world in which Elon Musk can tweet two emojis and your home depreciates 80% in value is a dystopia.

Immercenary is messy and ambitious. On one hand, your character controls are almost vehicle-like. Walking acts more like a throttle rather than a simple system of “push forward to go forward.” Getting a bead on enemies can be tough because of the controls and the wildly inconsistent frame rate. On the other hand, it features an impressive open-world structure for 1995, an imaginative concept, wonderfully weird characters, and some of the most unironically great FMV sequences ever pressed on a disc. I’ve grown to adore this game whether or not it has a relevant message for us in the 2020s, but the fact that it does has made it one of the most rewarding games I’ve played in a long time.