Investing in Autonomy: The Off-Hands Approach of The Last Remnant

Posted by Giancarlo Vazquez on October 14, 2020 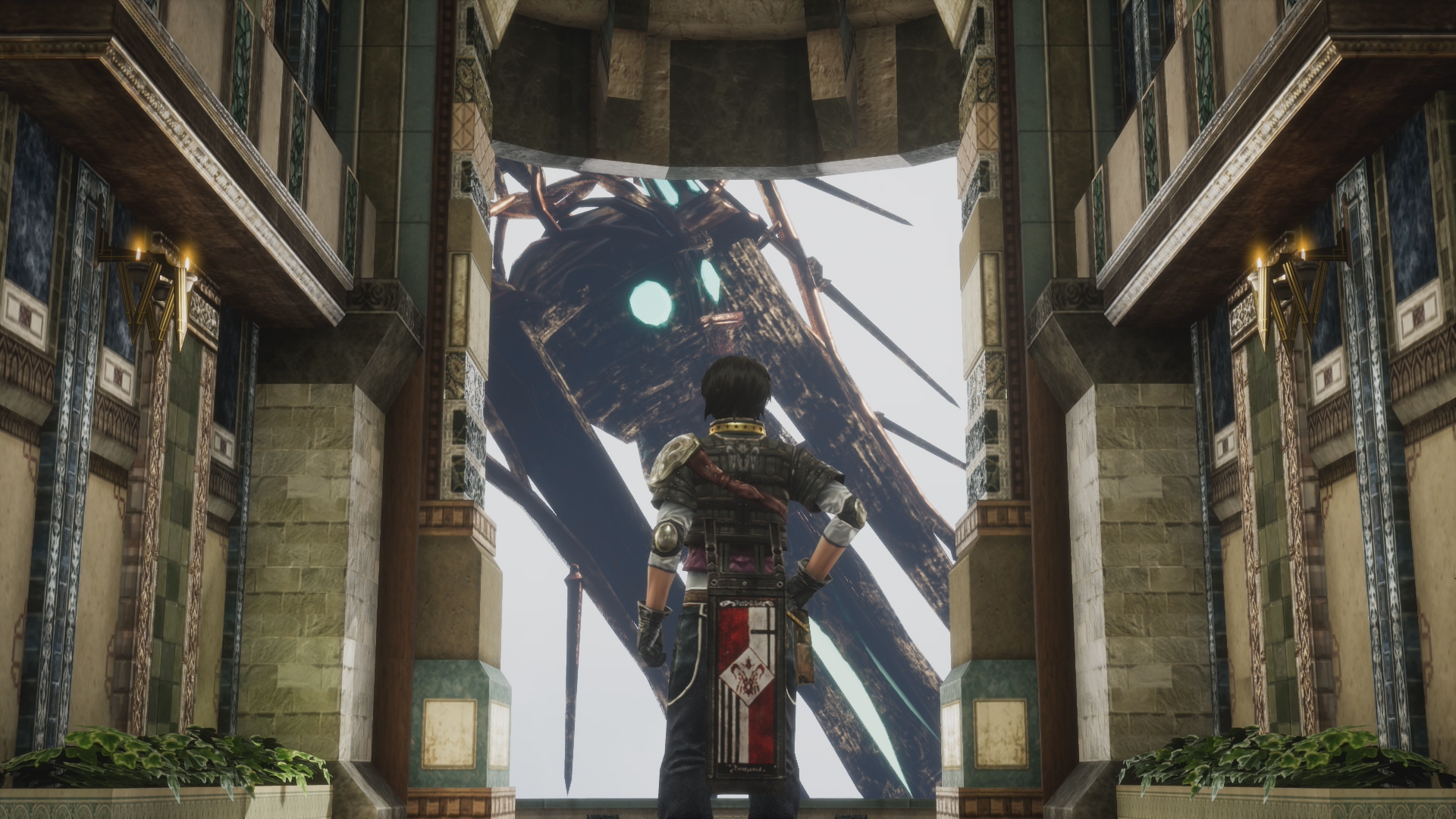 Trying on outfits can be fun. The core of RPG party management is trying on outfits until every member is dressed in the perfect drip for an upcoming boss fight. Customization creates more than an optimized load-out, however. A connection between player and party forms, and our perception of these characters is simultaneously influenced by and influences our choices equipping them. In Dragon Quest XI, weapons greatly affect whether we view Erik as an efficient dagger assassin, a swashbuckling duelist, or an eagle-eyed boomerang marksman. Even when options are limited, such as in Fire Emblem: Three Houses, class promotions are a question asking us to choose which class fits Lorenz best. (It’s Dark Knight, by the way.) We come away with a personalized understanding of who they are, and almost every RPG utilizes the control players have over their party to instill a sense of familiarity. It’s such an effective storytelling device in its own right, it’s practically conventionalized in the genre.

The Last Remnant respectfully disagrees with convention. Released in 2008 and directed by Hiroshi Takai (Final Fantasy XVI), The Last Remnant sees the player as general of their own army. Each individual in your army possesses their respective stats, equipment, and skills with progression and growth for all three. Although Rush, the game’s protagonist searching for his kidnapped sibling, can be personalized as you please, the hundreds of other potential members of your army retain control over their load-outs. In other words, what your units decide to do with themselves isn’t any of your business, but it doesn’t mean you can’t get along and maybe help one another develop. The Last Remnant’s cast of characters keep significant autonomy within the game’s mechanical structure entirely for our benefit to help connect with them. Lying underneath its antithetical approach, The Last Remnant imparts a small piece of wisdom to those holding the controller: Investing in someone else’s autonomy is a beautiful endeavor.

From Player to Player-Coach

We aren’t without the means to maintain autonomy as far as catering gameplay to our own liking. We are still commanding the game, after all. Units can be organized into squads which can assume any number of battle formations. Formations serve a multitude of purposes as well as benefiting certain abilities and specific placement of units. The arrowhead formation provides physical fighters at the front with enhanced attack power while providing defensive boons to units making up the back ranks. Another formation can protect a squad from flanking attacks, giving enhanced evasion to units placed on its sides. Battles consist of directing squads to engage enemy troop formations, with each group entering a deadlock with one another until either of them falls. The caveat? None of our commands are exact call-outs for fire spells or deadly two-handed strikes. We can instruct a squad to use their long-range spells, but if units within don’t know any long-range spells, they will stand by or defend their position instead. Units able to act on a Combat Arts command will choose which ability within their repertoire would be most effective in executing the order.

Naturally, being successful in The Last Remnant’s battles is knowing which units share compatible skill sets, grouping them into a squad of their own, and allowing them to do what they do best. To help achieve good party synergy, we’re allowed to disable different skill trees in each unit’s stat page and have control over the number of squads and units within each one. These are paramount as a unit’s skills only grow stronger and more varied when applied in battles. Using Mystic Arts will make them better magic casters, influencing their stat growth towards the role they are asked to perform. Building on your party’s strengths and trusting their ability to perform sufficiently is a symbiosis, a mutual trust to ensure each other’s success. The Last Remnant says achieving autonomy is assisted by the support of others, and at times, relying on their direction without fear of being led astray. It is the gratification of being surrounded by others with common goals, or having your desires encouraged by them.

Scratch My Back and I’ll Shield Yours

In place of direct control is communication. Allies make their intentions known to you: Materials won from your hard-fought battles will be claimed by whoever requires them for an equipment upgrade. Returning to the world map may reveal requests from your army to gather specific materials, or even weapons sitting in your inventory. As they gain stat boosts, characters will approach you for advice on how to progress their combat proficiency. Units will ask Rush whether they should continue their current focus or move onto learning healing spells or physical abilities, providing an opportunity to guide them towards different builds. These decisions greatly affect their future needs: materials they’ll need, their future interests in learning other skills, and the weapons and equipment they may be interested in.

These small moments of interaction are integral to The Last Remnant’s themes of autonomy. Though left to their own devices, the units value your input in the same way a friend would. Scrounging materials for Blocter’s new axe becomes a personal act of kindness instead of a mathematical decision. Insisting Pagus continue working through the Mystic Arts is a personal belief of where their strengths lie in addition to a tactical choice. A greater sense of pride is born from watching your input utilized by those around you than it is through shoving the sword in their hands yourself.

The story told in The Last Remnant reveals the driving theme largely through the context of its mechanics. The world revolves around the power of Remnants, magical entities of grand design able to be bound to mortal hosts at the cost of said host’s life-force. Remnants which go unbound for too long can cause a Collapse, a calamity of indeterminate magnitude. The Last Remnant leaves this relationship ambiguous: it could be a painful dependence forcing humanity to bind to Remnants in order to prevent their own demise. It could also be a mutual relationship allowing Remnants to exercise their powers while simultaneously allowing humanity to achieve otherwise unattainable goals.

David Nassau rules the city-state of Athlum and works tirelessly to attain sovereignty from the ruling state of Celapalais. His last name, Nassau, is taken directly from the city in the Bahamas, known for having been a haven for pirates (romanticized for being free individuals with no authority to answer to) in the early 1700s. At the apex of his quest to gain Athlum’s autonomy, David meets a living embodiment of it. Rush is a free spirit; he’s informal, easily excited and driven towards his own goals. In the process of writing this, it’s become evident the naming schemes of The Last Remnant may be a bit too on the nose. The binding rules of Remnants and bureaucracy mean little to Rush, the son of two renowned scientists, living with his sister Irina on an island away from society. Upon meeting David, his early adventures — The Last Remnant’s first two tutorial dungeons — involve putting a stop to an underground slave trade and uncovering an anti-Remnant plot to overtake Athlum by force. Shortly thereafter, their goals diverge and Rush sets out on his own, refusing to pause his search. This yields few results, and he quickly learns allying himself with David is the best course of action.

Rather than representing the loss of innocence, Irina’s kidnapping represents the loss of autonomy. Kept in captivity, forced to use her unique abilities for the benefit of her captors. Rush losing Irina means the loss of his own autonomy when he quickly falls into line with the Athlum generals. As the narrative moves forward, David and Rush’s relationship relies on their mutual respect and how they can help each other without discarding their own goals.

The world of The Last Remnant is ruled by the states of autonomy. The notions of trust, mystery, and political turmoil between its characters parallel the relationship between society and Remnants. Their instability when unbound represents the dangers of losing one’s independence against an oppressive force, yet their inferred sentience and powerful abilities when bound could also represent the significance of practicing our independence in the presence of others. Our protagonist chooses to leave his party members to their own devices, performing his role as commander aptly and only providing guidance when it’s asked of him. He’s given the same in turn and the balance achieved between him and his friends propels their success forward.

The Last Remnant’s emphasis on relationships in regard to autonomy is a focus on its primal requirement: Autonomy is a fundamentally social concept. It requires the support of others, whether that’s collecting feedback on how to progress your talents, helping others in return for helping them, or trusting one another. It’s unachievable when under direct orders or by putting yourself in a vacuum. Both cases lack another individual gratifying your actions or confirming your free existence. Multiple parties are required for a mutually autonomous relationship. After all, trying on outfits can be fun, but trying them on with friends is better.