Posted by Derek Heemsbergen on August 6, 2012 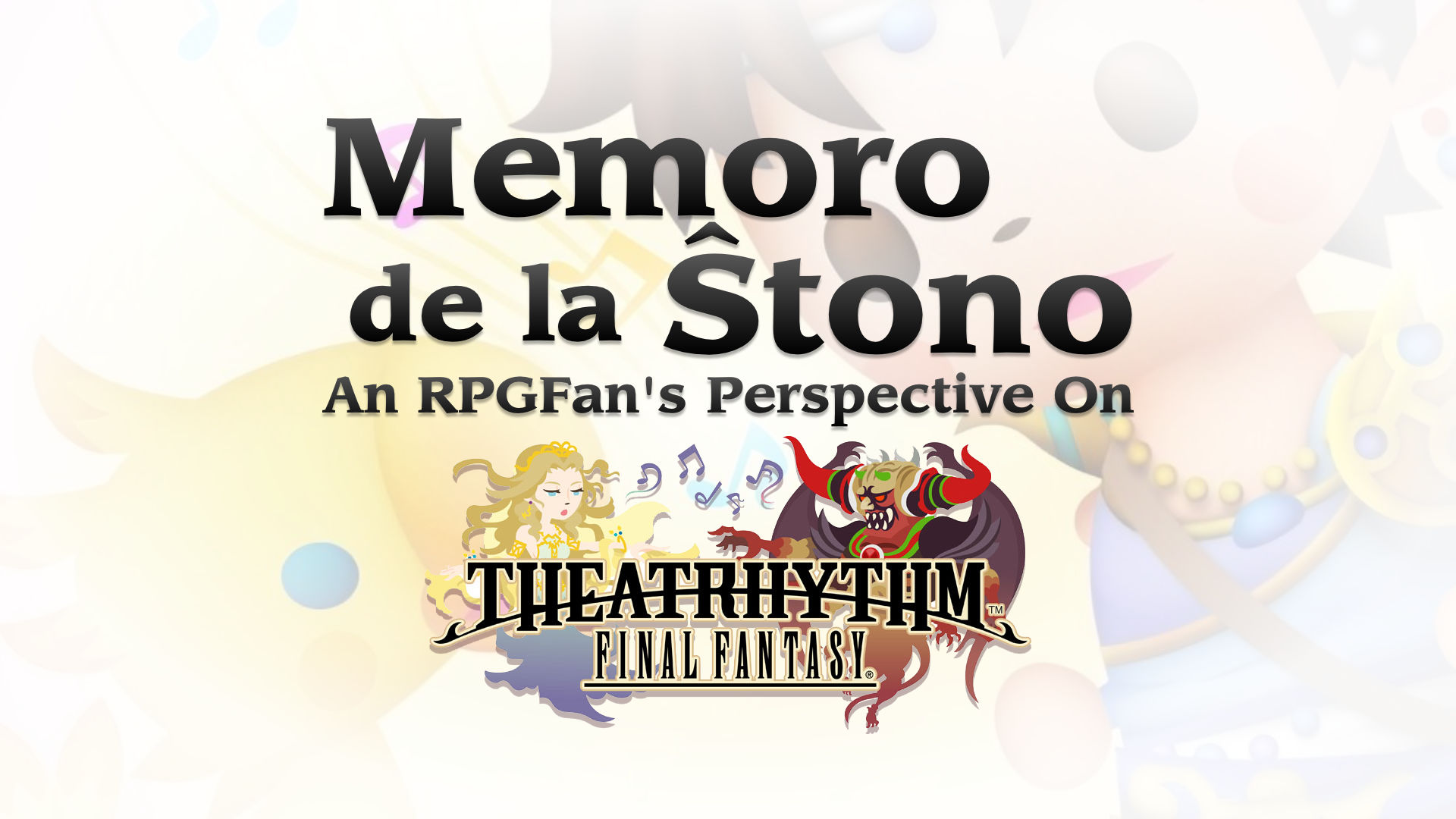 Theatrhythm Final Fantasy is a game that fills an unusual niche. While it technically falls outside of our coverage here at RPGFan, we couldn’t overlook its significance as a title that celebrates twenty-five years of magic, moogles, and music. It’s an enjoyable rhythm game with an impressive presentation, but more than that, it’s an experience intended to evoke memories of Final Fantasy.

I’ll start by saying that this is not a review. You won’t find a debate about the tracklist or a detailed explanation of the game’s mechanics here. Instead, I wanted to approach it from a different angle, one that relied on the feelings in my heart and not the scores in my head. What follows is not meant to reflect the collective opinion of RPGFan, rather it’s simply one editor’s stream of consciousness as he played each set of songs. Perhaps it will elicit some of your forgotten memories, too.

The one that started it all. I never made it far into the NES version, but I had a great time with the remake in Final Fantasy Origins. The summer it came out, I sat with a group of four friends as we each picked a class and named a character after ourselves. Laura the Warrior, Bill the Thief, Jody the Black Mage, and Derek the White Mage went on to knock Garland down and save the world from Chaos. I wish they had put the arranged battle theme in Theatrhythm, but I’ll have to settle for the chiptune version instead.

My least favorite game in the series, but one that still has a few quality tunes. “The Rebel Army” is an especially memorable one, and I find myself humming it every now and then. I tried to play this after Final Fantasy I, but the obtuse leveling system never resonated with me, and I stopped somewhere around the time Leila joined my party. All I know is that the Emperor is a jerk.

It’s a shame this one came out after Final Fantasy V in North America, because the job system in III just wasn’t as satisfying. Maybe it was the slow pace of battles, or maybe I was simply impatient, but Final Fantasy III is not a game I reflect on with particular fondness. At least the characters were friggin’ adorable. In Theatrhythm, “Eternal Wind” reminds me of grinding on the world map.

I’ve played this game to completion more times than any other Final Fantasy. When I was a kid, I used to rearrange my room a few times a year to keep my environment feeling fresh, and sometimes that was all the reason I needed to replay Final Fantasy IV. “I’ve never fought against the Mist Dragon with my TV in this corner,” I’d say to myself. Kids do some weird things.

Despite a reveal only an hour or two into the game, I was still shocked when Faris turned out to be a woman. Thinking back, that only made me like her more, actually. “Four Hearts” brings back memories of obtaining the Wind Crystal and agonizing over my first job choices. Faris was always a Blue Mage, of course.

I love this game so much it hurts. I used to walk around outside of Narshe and grind on rabbits just to hear “Terra’s Theme” on repeat. Back when I was crazy about Power Rangers, I always named Sabin “Tommy” after the Green Ranger and put him at the head of my party whenever possible. On a less embarrassing note, “The Decisive Battle” evokes images of my first battle against Ultros on the raft. Don’t tease the octopus, kids!

I still think the atmosphere in this game is unparalleled. The feeling of awe I had upon leaving Midgar for the first time and hearing the main theme is something I’ll never forget. I’d rather have “Fight On!” as the battle track here, but “One-Winged Angel” is such an iconic song that its inclusion was expected.

I’d played other RPGs with romantic subplots before this, but the way Squaresoft hyped this game’s theme of love made “Waltz For The Moon” feel special to me. It really made me root for Squall and Rinoa, and their dance scene felt genuine. “The Man With The Machine Gun” was an excellent battle track that set the Laguna sections of the game apart, so I’m glad to see it represented here.

I remember playing this on a road trip in my family’s motorhome and wandering around outside the Iifa Tree. I associate “Over The Hill” with bumpy highways and the whirr of an electric generator. Something about the tune, and indeed, the whole game, feels innocent and ceaselessly optimistic.

“Suteki Da Ne” is a song with serious emotional punch, and combined with the image of Tidus and Yuna swimming in Lake Macalania, it’s enough to move me to tears. Or at least it would be if I wasn’t trying to score a SSS on challenge mode! Joking aside, I couldn’t have picked a better event mode song. “Mi’hen Highroad” as a field song, on the other hand, is questionable and I’d have preferred “Besaid Island.” Oh, how I wanted to swim in that giant lagoon at the beginning of the game.

I’ve spent countless nights in front of my computer playing Final Fantasy XI, and “Vana’diel March” was the melody heralding my arrival to that new frontier. Many shun this game as a numbered Final Fantasy title, but it holds a very special place in my heart. I devoted seven years to exploring Vana’diel and discovering its darkest secrets. Six of those years were spent playing with my partner, who I am now about to celebrate my seventh anniversary with. Rahm the Red Mage and Etherealx the Puppetmaster were a dynamic duo that conquered a multitude of challenges together and made everlasting memories.

I can’t think of this game without remembering its midnight launch on Halloween of 2006. I dressed up as Zell from Final Fantasy VIII in a horrific attempt at cosplay, while my friends dressed as Squall and Yuffie. We stood outside of EBGames, eating free pizza until the clock struck twelve and I got to pick up my steelbook copy of the game, which mysteriously held a second, identical bonus disc. I wasn’t initially enamored with the game itself, but I’ve come to appreciate it much more in recent years. I’m delighted to see the underrated “Giza Plains” make an appearance here.

I adore this soundtrack, and – dare I say it – I even enjoyed this game. I can imagine Vanille skipping along to “The Sunleth Waterscape” and facing her tragic fate with relentless cheerfulness. I can imagine Lightning breaking through a horde of soldiers in a desperate attempt to save her sister as “Defiers of Fate” rises to a crescendo. This is another title that means a lot to me because I played the whole thing with my partner, and we became invested in the story together. Whatever controversy the game begot, it remains a memorable experience for me.

Final Fantasy is held dear by so many people around the world because it has the ability to create these kinds of feelings. Theatrhythm is nostalgia distilled into a cartridge, and I’m grateful that I had this opportunity to reminisce about a series that has brought so much joy into my life. Happy 25th anniversary, Final Fantasy. Here’s to the adventures we’ve yet to embark on.