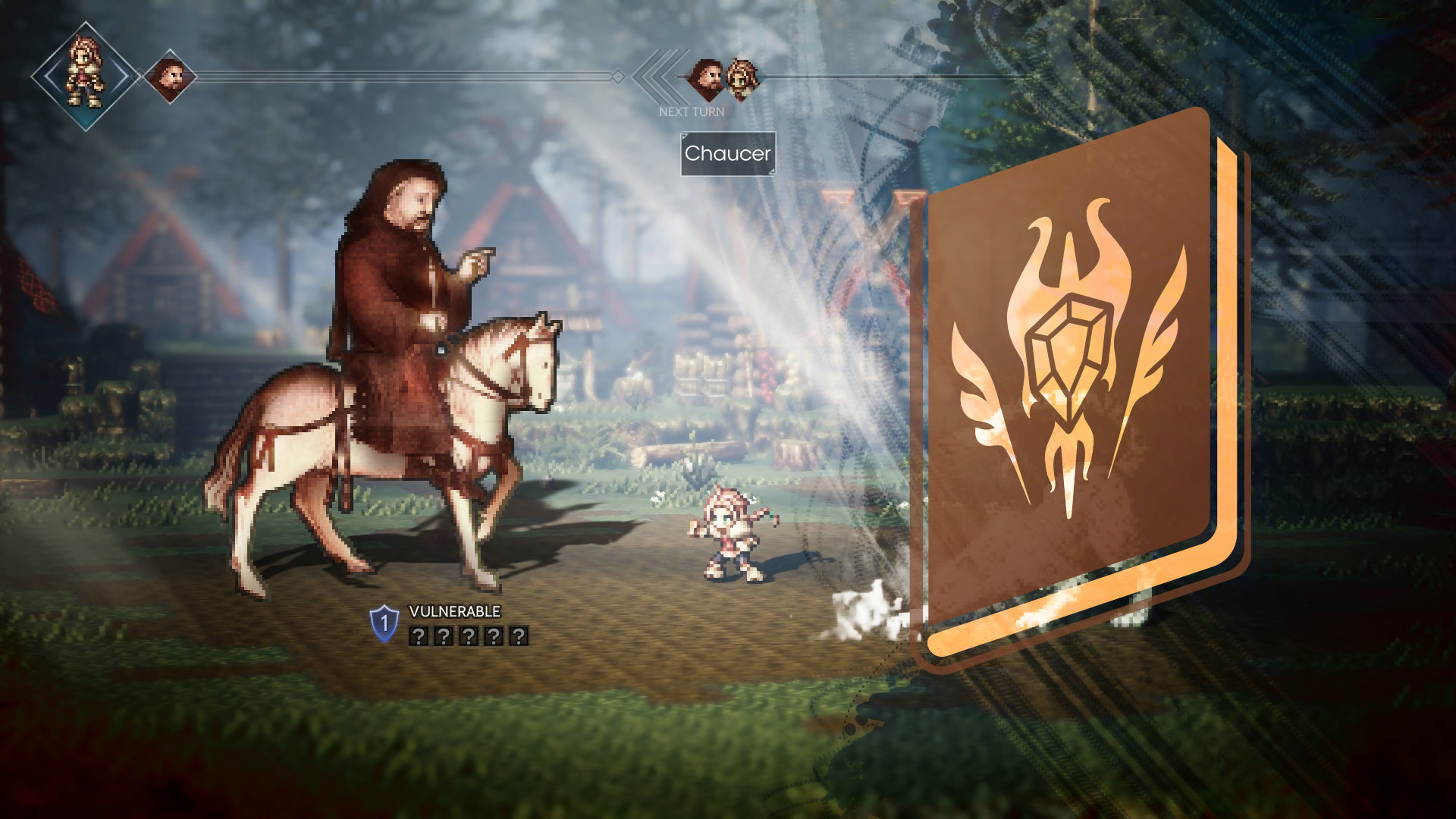 Long, long ago, there was an idea for an RPGFan feature series that centered around books. Absolute cheese novel adaptations of games, game/novel pairings…basically the intersection of interactive fiction and print fiction. Multiple writers expressed interest and the idea grew. What you see before you is the latest installment in that venture, and what you take away from it is up to you. The joy of reading is in the interpretation, after all. Today, Hilary Andreff brings us Octopath Traveler and The Canterbury Tales and discusses how they pair together!

I still vividly remember when Octopath Traveler was released. There was widespread agreement that the game is fun and looks beautiful with its innovative HD-2D visuals. However, there was also some backlash around the huntress character, H’aanit, speaking in an antiquated-sounding English dialect that some labeled “Middle English.” If you complained that H’aanit’s dialogue was confusing or hard to read, well, today’s book and game pairing is not for you, and let me leave you with a little parting Middle English. For everyone else: we’re getting into some older literature today and discussing Chaucer’s The Canterbury Tales because, if you approach the language with an open mind or find an accessible version, there is a lot to appreciate, and it shares several elements with Octopath Traveler.

Let’s start with the obvious parallels. First, there’s a character in Octopath setting out to do the exact thing all the Canterbury characters do: going on a pilgrimage. The cast of The Canterbury Tales exists in a frame story where people from all walks of life travel together on a religious pilgrimage to Canterbury. In Octopath, cleric Ophilia Clement undergoes her church’s rites to undertake a religious pilgrimage—kindling the Sacred Flame—in her adoptive sister’s place so her sister can stay with their ailing father. Though her motives are not exactly what you’d find in The Canterbury Tales, she soon meets up with the rest of the eight travelers, who also represent several different backgrounds and occupations from warrior and merchant to noble-turned-dancer.

Chaucer uses a well-known Medieval idea of the three orders of society (those who pray, those who fight, and those who work) to categorize his travelers. You can also apply that framework to the Octopath cast because of the care taken to ensure their societal roles fit the fantasy mold. If you enjoy the symmetry between party members through Path Actions—such as guiding versus alluring—and how Path Actions connect the party with the NPCs and world, you may find the exchanges between pilgrims in The Canterbury Tales entertaining.

If you feel that Octopath Traveler has a cast with varied stories and motivations, then The Canterbury Tales will absolutely floor you with how it uses characters of various socioeconomic standing to discuss society more broadly. The main difference between the two casts is that each section of The Canterbury Tales is a story that one of the travelers tells while on the road, whereas Octopath‘s characters are experiencing their stories in real-time. Another difference is the endings; Canterbury Tales presents its stories as independent and relative to each other, while Octopath ties absolutely everything together if you have patience and get the true ending. Which of these styles you prefer is a matter of taste.

Another aspect of both these works that I really love is their spirit of innovation. Octopath Traveler came along at a time, at least for me personally, where I was looking for an RPG that distinguished itself from others—a game that did things a little bit differently. Between Octopath‘s never before seen HD-2D graphics and innovative gameplay systems, I found that and more. Chaucer, however, can be credited with starting a new rhyme scheme in English poetry that influenced poets from Shakespeare and his contemporaries to modern-day verse-makers. What’s more, he wrote in his local language, the vernacular, when that was not a common thing to do. This is extremely important because it made literature more accessible to everyone. It’d be the equivalent of Octopath making all RPGs, or even any video games, accessible for a large portion of the population that hadn’t previously been able to play them.

This pairing seemed pretty self-explanatory upon reflection, but the more I considered it, the more details I found showing how similar and complementary these two stories are. One of the very best things about both of them, however, is how they’re both relatively modular in nature. You can choose the order you pursue characters and stories in Octopath Traveler, and The Canterbury Tales are a series of self-contained stories. In fact, there’s a good deal of speculation around the intended order of the Tales, or if they were actually finished at all. This narrative truly lets you find and stick to the tales you like, whether that’s revenge stories like Primrose’s arc, bawdy stories like the Miller’s Tale, or more sentimental material like the Knight’s Tale or Ophilia’s bittersweet story of familial love and devotion.