How They Swore The Iron Oath: An Interview With Curious Panda Games 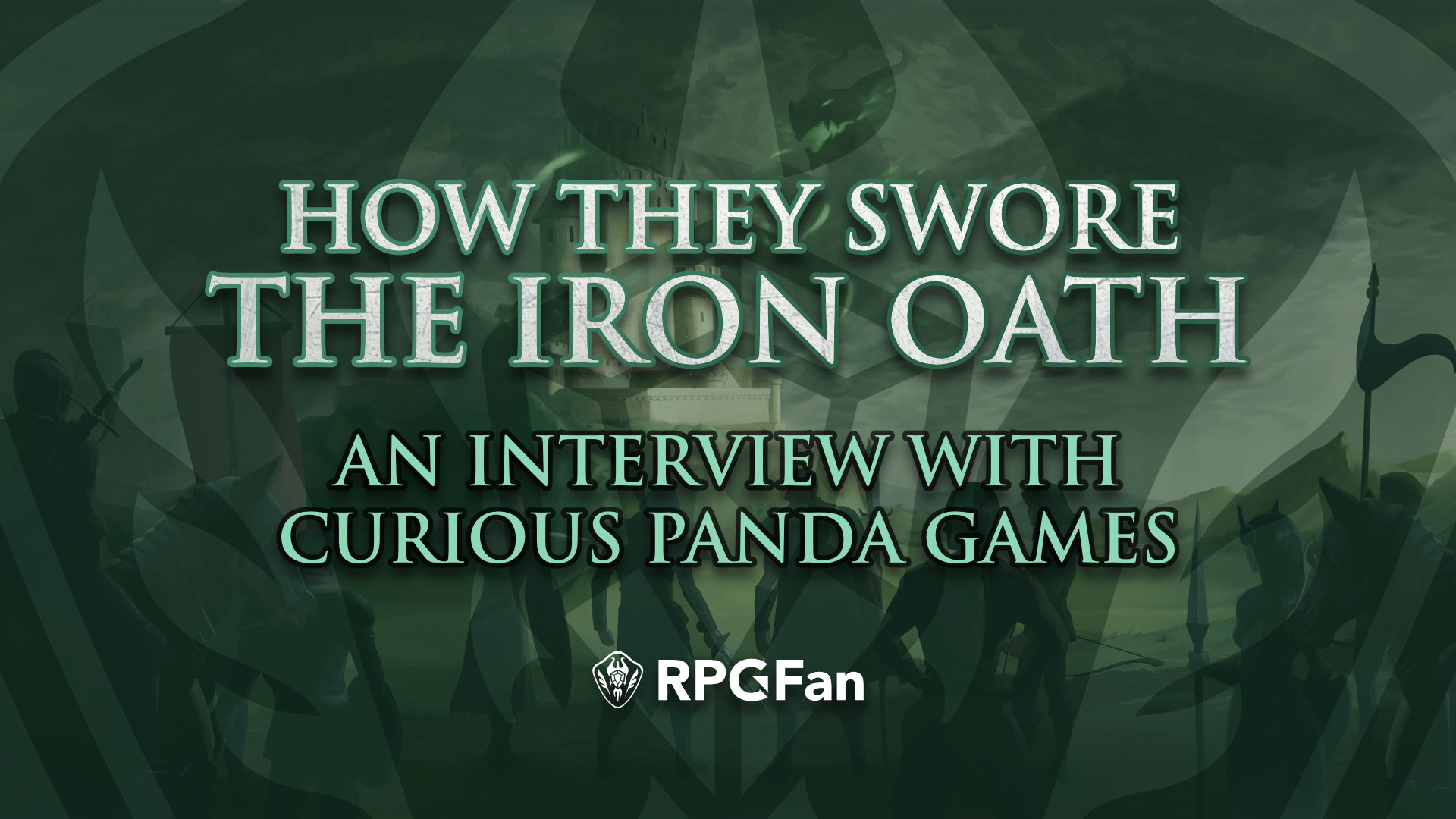 The Iron Oath is a turn-based pixel-art mercenary-managing RPG *gasps in hyphens* that recently released into Early Access on Steam. As a game that’s still in development, we have been granted some first-hand insight into the process by none other than the developers themselves! Join us as we learn about the current state of Curious Panda Games’ newly-launched title and their plans for future updates.

RPGFan: Hello Curious Panda Games, we’re very happy you could join us for an interview! We’ll mostly be talking about your upcoming title, The Iron Oath, but please introduce yourselves to our readers.

Curious Panda Games: Hi, thank you for having us! We are Chris Wingard and Nik Mueller, and we’re a two-man team that started making games together back in 2009. The Iron Oath is our first serious project and we’ve both been working full time on it since 2016, with Chris doing all of the programming, and Nik doing most of the art.

RPGFan: The Iron Oath has just launched in Early Access on Steam. What can players expect to see from the game in its current state, such as its story and exploration?

Curious Panda Games: Currently there are about 15 hours of unique content for players to experience. Many contracts are dynamic and repeatable though, so players can easily go over that number in a single playthrough (many have already clocked well over 50!). The main campaign as it is now can be completed in about 8-9 hours, and it serves as a good introduction to the game and some of its lore (such as the dragon, and important factions like the Vanguard). As we continue in Early Access we’ll be adding on to the main campaign and bringing it to a conclusion.

RPGFan: Upon completing the opening sequence of The Iron Oath, players get their first glimpse at the overworld map. There are an impressive amount of locations spread throughout the world of Caelum, but there’s also a lot of changes that can happen to each area. What kind of events and differences can we expect to see?

Curious Panda Games: As you go through the game, the status of the various cities will change through dynamic events, altering things such as: which quests are available, which enemies you are likely to encounter on the road, the price of buying and selling goods, and more. Some events are unique to a region, such as sand storms in the Redlands, and some are on a more global scale, like when two Noble Houses go to war. When war occurs, cities can change hands or even be destroyed. So if one of your allies becomes involved in a war, it’s a good idea to help them out, otherwise they risk losing territory or being wiped out entirely!

RPGFan: There are many interesting themes and gameplay mechanics within The Iron Oath, such as mercenary management, the passage of time and the ageing of your characters, and dynamic world events. In its current Early Access form, the game appears to be built from the ground up around these elements; were these ideas the “spark” that instigated development for The Iron Oath, or did they come later in the process?

Curious Panda Games: Most of those concepts were there from the start. We started the game having been inspired by Darkest Dungeon. We thought it would be really cool to take their dungeon crawling and management mechanics, and add on a large overworld where time was a factor. The dynamic world events was something we added on a little later, as we wanted to make the world feel more alive, almost as if it was being simulated.

RPGFan: Working in tandem with your “time” mechanics, you’ve implemented a full calendar system. Does the calendar have any effect on gameplay, aside from keeping track of the in-game date?

Curious Panda Games: We don’t have any type of “doomsday clock” scenario, but the dragon does return every decade, and it’s a good idea to be prepared for that event. Our first major update this Spring will be focused on the Scourge and adding more consequences to it, so it will be even more important going forward. The calendar is also important for the expiry of quests, particularly in the case of the main campaign (though the expiry time on it is pretty generous). Since time passes, your employers will expect you to complete a job within a reasonable timeframe.

RPGFan: “Time” is something players will need to be wary of while traversing dungeons, as the longer they spend exploring, the more handicaps they’ll have stacked against them. Adding this to dungeons’ random events, things can get hairy pretty quickly. How are you balancing difficulty levels to make sure things aren’t too overwhelming?

Curious Panda Games: The time modifiers are weighted, so generally the most detrimental ones won’t come into play until the player has “overstayed their welcome.” As long as they spend their time wisely and camp at appropriate times, they should be able to overcome the obstacles thrown their way. Though the game is meant to be a challenge, there are three difficulty levels, and we’ve also included a custom setting where players can tweak a large number of sliders to their liking.

RPGFan: On a personal note, the concept of your characters “ageing” in games is very appealing to me. However, it’s quite rare for it to be seen in games. We often become attached to our characters, having raised them from stick-wielding peons through to forces of destruction. What impact does a character’s age have on them? Are there retirement homes in Caelum?

Curious Panda Games: Depending on the age of a character, they will receive a bonus to their attributes when they are in their prime. So like any sports management game, you will find your characters tend to perform their best in a certain window of their career. As your characters age, they will begin to contemplate retirement, depending on a few factors such as their class and how many injuries they’ve accrued over their career. There is no retirement home for you to visit them, but we will be adding an option to keep them around as Council members in one of our future updates. In general, the ageing process isn’t too fast, and players will get plenty of time with their favourite mercenaries (so long as they can keep them alive!).

Curious Panda Games: The game’s core loop is in a pretty polished state, but there are also a lot of systems in play. Because we’re a small team, we felt it was necessary to get as much feedback as possible in order to make the game the best it can be. Seeing similar games go through Early Access such as Battle Brothers, Urtuk, and more recently, Wartales, also gave us the confidence to go ahead with it.

We’re now almost two weeks into our game’s release, with a growing Discord community that is just as excited about the game as we are, so we think the choice has proven to be the right one for us!

RPGFan: The Iron Oath is being published by Humble Games, a company I personally think does great things. As an indie developer, has the support of a publisher helped you implement some of your more ambitious concepts?

Curious Panda Games: Their support has been tremendously helpful! We partnered with them four years ago, so just being able to work on the game during that period without having to stress about finances has been a relief. To answer the question, I think the opposite is actually true: their experience helped reign in some of our more ambitious features (and avoid scope creep!), so we could instead keep focused on strengthening the core of the game.

RPGFan: We wish you all the best with the continuing development of The Iron Oath, it’s shaping up to be a deep and satisfying experience. As we say our goodbyes, do you have any parting words for our readers?

Curious Panda Games: Thank you! To your readers: if you’ve already played, or are thinking about playing The Iron Oath, we would love to have you join our Discord Community and take part in shaping the game’s future! We appreciate all feedback and try to read and respond as much as we can.

RPGFan would like to thank Chris and Nik from Curious Panda Games for the developmental deep-dive into The Iron Oath. We look forward to covering the game’s progress in the future and wish the team every success with its completion. If you’re interested in The Iron Oath, wishlist it on Steam, visit the official website, and follow its official Twitter.