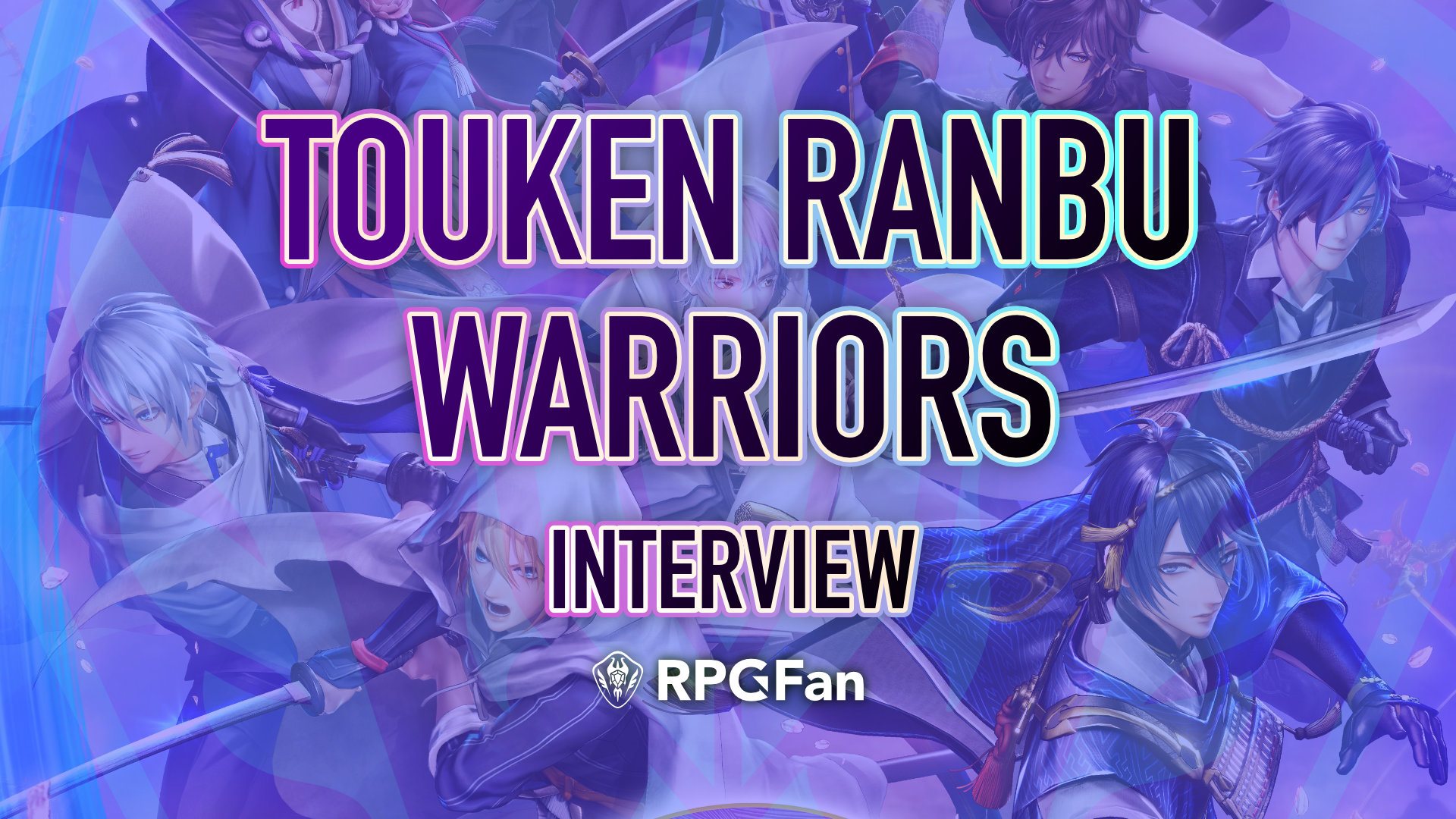 Touken Ranbu Warriors brings 15 of the beloved swords-turned-swordsmen of Touken Ranbu -ONLINE- into the third dimension in the latest of Warriors‘s storied line of collaboration titles. We had the opportunity to ask Touken Ranbu Warriors General Producer Mei Erikawa of Ruby Party and Producer Tomohiko Sho of Omega Force some questions about this exciting partnership, the game’s exclusive new character Omokage, and more!

RPGFan: The setting and characters of Touken Ranbu feel like a natural fit for a musou game. What inspired this unique collaboration, and why now?

It originated with Ruby Party approaching Nitroplus and DMM GAMES about releasing a home console adventure game for Touken Ranbu -ONLINE-. As we discussed it, Nitroplus made the suggestion that “if it’s a console game, then what about a collaboration with the Warriors series?” And it just happened that around that time one of the game magazines in Japan held a reader survey asking what work they’d like to see collaborate with the Warriors series, and Touken Ranbu -ONLINE- was in first place, so that also helped push the collaboration forward. The project details were discussed over many years and many times with Nitroplus, and we were finally able to make it happen.

RPGFan: What kind of goals did you have when working on Touken Ranbu Warriors compared to other Warriors collaborations?

For the Warriors series, it was our first time collaborating with content where the core audience consists mainly of female fans. And we thought that there may be many fans of Touken Ranbu who don’t normally play action games, so a major goal of Touken Ranbu Warriors was to create it so that even those new to action games would be able to really enjoy it.

RPGFan: What factors went into choosing the Touken Danshi who appear in Touken Ranbu Warriors? Were there any difficult choices to make?

Since the game deals with the Sengoku era of Japan, we began by selecting real and significant historical figures who played a key role in the Sengoku era, and then selected the Touken Danshi involved with them. From there we further refined the selection and made many adjustments so that a variety of sword types would appear. However, there are more than 15 swords that have connections to the Sengoku era so it was really difficult to make the final selection.

RPGFan: What kind of considerations and decisions went into creating each Touken Danshi’s moveset or gameplay style?

We really valued each character’s identity/essence, so while referring to the original IP Touken Ranbu -ONLINE- and spinoff works, we were conscious to be in line with what fans consider to be the Touken Danshi’s characteristics. Also, we made sure that players can clearly feel the difference between each of the characters even if they’re the same type of sword.

From the start of development we had talked about having a new character appear that is original to Touken Ranbu Warriors, and we thought that by including one new presence, we could bring out new appealing features of the existing Touken Danshi. Also, in the process of creating a completely original story we wanted a theme to be the centerpiece, and with the birth of the new character Omokage the overall story was given a sense of unity. While thinking about Omokage’s characteristics and action style, it also helped to make the main story bigger and bigger, so it created an amazing synergistic effect.

RPGFan: What was it like designing Omokage? How was the process of creating a new Touken Danshi affected by Omokage’s inclusion specifically in a Warriors title?

There were many twists and turns before Omokage was created, but aside from his appearance the rest of the details were decided on pretty smoothly. Since we wanted to also show his mysterious feeling visually, we gave him somewhat fragile facial features. Also, his distinct back design is a design that is characteristic of Touken Ranbu Warriors where the back of the characters are frequently seen during battle.

RPGFan: Ruby Party is prolific and well-loved among fans of joseimuke media, even outside of Japan. What role did Ruby Party play in the development of Touken Ranbu Warriors, and why were they chosen for the role?

Initially, Ruby Party had come up with a plan of using the Touken Ranbu IP for a romance adventure game, but the project began moving forward as an action game, so that is how Ruby Party was paired up with Omega Force. Since Ruby Party’s strength is in carefully crafting characters and scenarios that really resonate with the hearts of women, they were mainly responsible for the scenarios and game world settings. However, with the two brands joining forces, to some people it may sound like each team was working independently from the other. However, there was no division by brand and everyone came together as a single team to produce the game, so the overall game was a result of the synergy of the two brands coming together.

RPGFan: Do you have any hopes for the future of Touken Ranbu Warriors, whether it be as a standalone game or perhaps as a potential foundation for a series?

Future plans are in the air, but if many people play Touken Ranbu Warriors, we definitely want to create a sequel for it. For this game, we have prepared various DLC such as Uchiban outfits for the Touken Danshi and additional music tracks, so we hope everyone will enjoy playing Touken Ranbu Warriors for a long time.