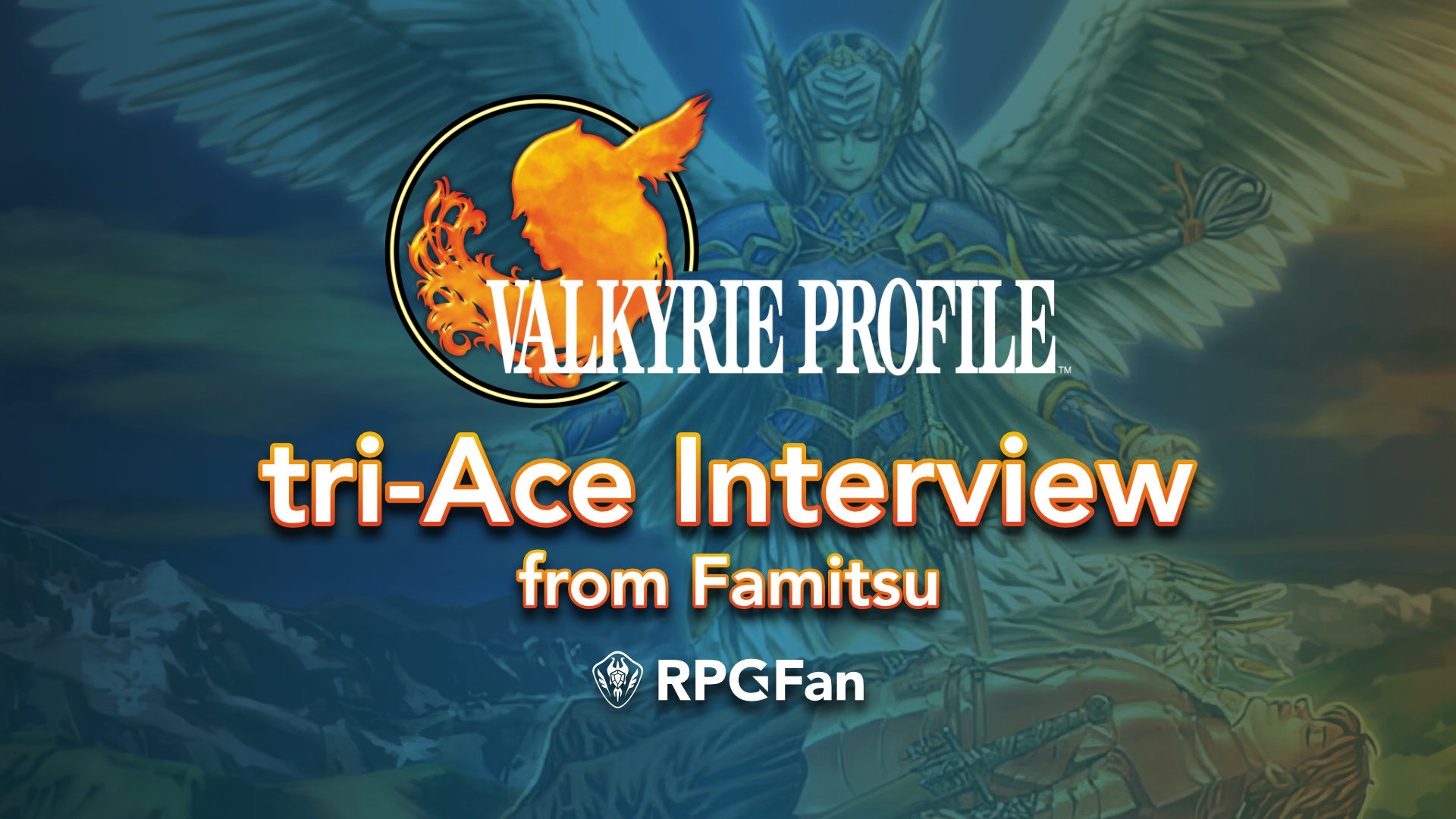 The following is a translation from the 10/8/99 Issue of Famitsu, in which they interview Yamagishi Yoshinorishi, the Producer of Valkyrie Profile, who also produced Star Ocean 2.

Before the Interview, here is the translation of the text on the Valkyrie Profile Ad, which summarizes the main plot of the game.

Famitsu: Why did you think of making the game Valkyrie Profile?

Yamagishi: My main motivation was the fact that I’ve always wanted to make an RPG based on Norse Mythology. The Star Ocean series was pretty much an ‘All Around’ RPG, and another reason being the fact that I wanted to work with a world in which the uses of Sword and Magic have been already set in place. To tell you the truth, we started on this game before Star Ocean: The Second Story was released.

Famitsu: The main point behind the game seems to revolve by acquiring spirits in ready for an on-coming battle, but could you tell us about the feel of the world that the game takes place in as well as its large scale story?

Yamagishi: The world that Valkyrie Profile takes place in is based off the world portayed in Norse Myths but we’ve changed many things about it. We’ve altered the look and feel of both the characters that appear in the game as well as the look of the world to make it seem more Eastern, like it took place someplace in Asia, so I guess it’s pretty much an alternate world. If you compare it to the likes of Star Ocean, you won’t find many similarities at all *laughs*. As for the story, well, to put it simply, its a mushy romance story *laughs*. The main character Platina and Rusio are childhood friends and are deeply in love with each other, while a certain female knight by the name of Jeil is attracted to the leader in her battalion…… The focus in love is more present in this game than in Star Ocean……I guess the folks at tri-Ace like Romance stories *laughs*.

Famitsu: Now about the system used in the game, whats the reason behind making the game side scrolling?

Yamagishi: We thought with the limited power of the PlayStation, going side scrolling would be the best way to portray such a beautiful environment. It also has to do the title “Valkyrie Profile”, since the word Profile also has that meaning (Editor’s Note: He is referring to this definition: a side view representation of an object, especially a human face) It also allows us to use large characters, which in turn opens up the opportunity to have scenes with better character acting (as in movements to match their feelings).

Famitsu: Since the map has been made simple, I suppose this means that we won’t have to travel long distances for no reason.

Yamagishi: Yes it is. I’ve wanted to make this game so that it is easy to play. If it’s a side scroller, it becomes very easy to discern between top and bottom, so it becomes easier to design dungeons. And since you won’t have to approximate height as you do in top view games, it should be easier to time jumps and make them as well. I think that this would allow the player to be more active while they play.

Famitsu: So you can jump in a dungeon by the touch of a button?

Yamagishi: Yes you can. Valkyrie can Jump, Duck, Slide, block, and a variety of other moves.

Famitsu: The battles take place right on the field with viewable enemies you can see from a distance, correct?

Yamagishi: Right. You press a button to get your character ready for battle and then you charge in. The special attacks are not limited by the number of points you need in order to perform it, but rather by your own input.

Famitsu: So once you learn a skill, it gets its own series of button presses?

Yamagishi: The timing of the button presses are quite important. We’re trying to make the battle system combo based. For example, you can first hit an enemy for hit #1, then hit him again as he’s going down for hit #2, then finish him off with hit #3. Each of the three characters you can control at any one time will attack with their own special skills seperately, so you can have wild combos such as a 3x3x3 with all three participating.

Famitsu: How many party members will be available in the final version?

Yamagishi: There will be 24 possible members in Valkyrie Profile, with the exception of Valkyrie herself. The characters we’ve introduced this week are from that 24 (Note: The six he is talking about are Jeil, Lezard Barrens, Sou, Mertina, Flay, and Ganossa). Since you follow the story of each character until their eventual death, I suppose you can call each of the 24 characters to be a main character. The decision of whether or not you want this character to be in your party in the end is up the player.

Famitsu: But it’s definitely better to have all the members in your party right?

Yamagishi: There are bad points of getting some characters. But then again, some events won’t happen if you dont have a certain character in your party.

Famitsu: Is there some form of time limit in which you have to get the Spirits back to the Upperworld?

Yamagishi: We’ve left that up for the player to do. I think that the players will have more fun if they had the freedom to do with a character as they wish before you send them up. Since battles will always be occuring in various parts of the world at any give time, you can level up a character as much as you’d like before you send them up. The player will decide in all aspects on how the character develops, while still progressing on with the story.

Famitsu: It feels as if you’ll be controlling many characters you won’t want to get rid of.

Yamagishi: I think they’d want to. Otherwise, the results of the final battle will be absolutely horrible *laughs*! Thats why I think that this game will end up being very replayable in the end.

Valkyrie Profile is slated for a release on December 9 for 6800 Yen. The game will span 2CDs.