TV Review: Castlevania’s Final Season is Slow to Start, but Erupts into a Whip-Cracker of a Finale 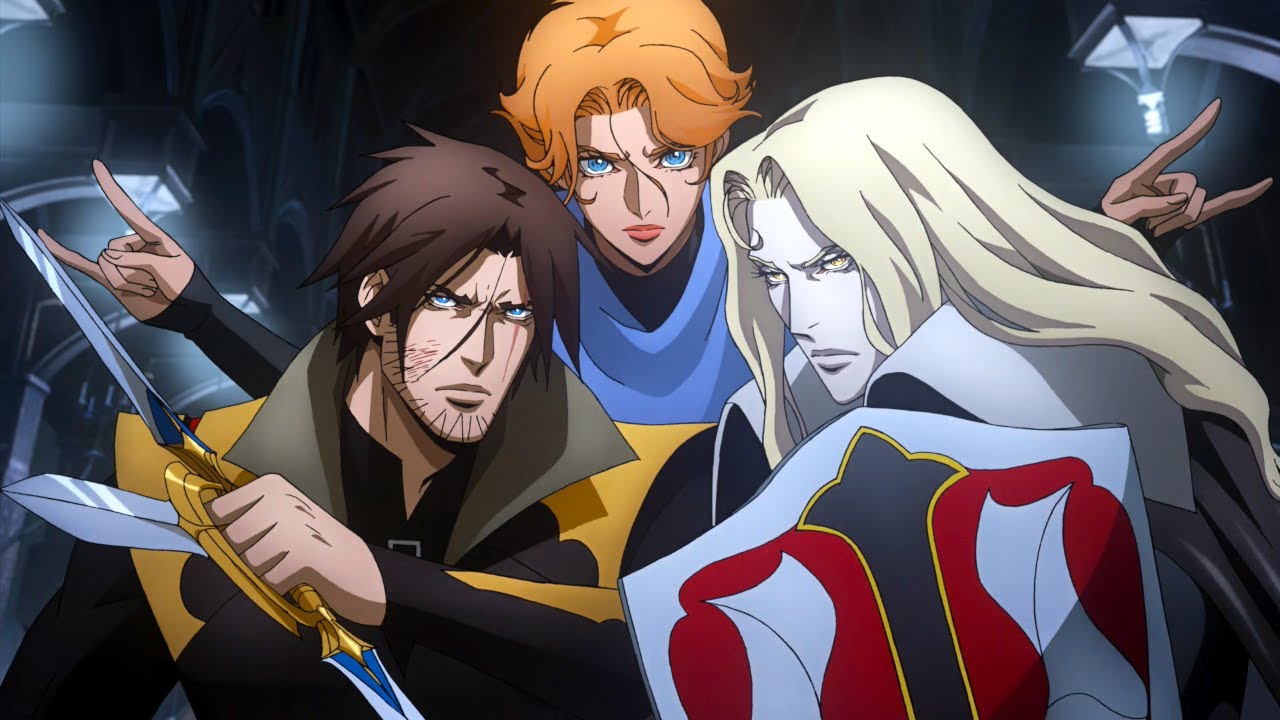 “Why is it that only human hands can reach into Hell? Don’t you think that’s weirdly f***** up?”

Throughout the Castlevania series, rarely is the morality of the villain ever called into question. The goal is simple: kill Dracula, or prevent the resurrection of Dracula. It’s a simple story, and there’s rarely any time for pathos or reflection. These same goals are shared with Netflix’s Castlevania, but we get more time to spend with the characters, both “good” and “bad.” Through four seasons, we’ve seen that humans can be just as evil as the Prince of Darkness. After all, they are the only ones who can reach into Hell, as one character says towards the end of season 4. It’s humans who caused Dracula to shun the world, and, even in death, his presence is pervasive as vampires and night creatures attempt to revive their master to punish humans.

The final season of this unexpectedly brilliant adaptation launched this month, less than a year after over 60 people came forward with allegations of abuse against series writer and creator Warren Ellis. His scripts are intact, and he is credited throughout this season but will not be involved with any potential shows or spin-offs going forward. Even so, this spectre looms over the season, and the expletive-ridden language and violent nature of the show are all Ellis trademarks. It’s impossible to detach his influence, but it should not detract from the rest of the writers, animators, and creators who worked on the show.

Season 4 picks up weeks after the season 3 finale, following the same four arcs as they approach their conclusion. Trevor and Sypha continue to travel and fight together, trying to prevent a potential resurrection of Dracula (as a Belmont should be doing). Alucard remains locked up in his father’s castle, but a nearby village asks him for help. Isaac is still after his old Forgemaster friend, Hector. And Hector remains captive under Lenore and the vampire coven, led by Carmilla, who now seeks to rule the world.

These four threads converge into two as the season approaches the end, but getting there takes a bit longer even than last season. Episode 1 is explosive, with some beautifully animated fight sequences and delightful bickering between Trevor and Sypha. I wouldn’t want to bicker with Sypha because she can freeze droplets of rain into a saw blade and cause spears of ice to burst into steam. Otherwise, the first five episodes slowly lay the foundations for the second half of season 4, and they flit between compelling and meandering, depending on the characters.

Getting the disappointing out of the way first, I feel Hector gets the short end of the stick again. After being manipulated by the conniving diplomat Lenore with a slave ring, Hector is suddenly more in control of himself, but unusually calm and settled with his abusive captor. Even stranger, Lenore has gone from sly and shrewd to passive. She now flirts with Hector, who reciprocates, but she’s unusually reserved around her vampire sister, Carmilla. Carmilla is suspicious of Hector and even voices that concern to Lenore, but she shrugs it off. The Lenore of the past season would not have done that, and there’s no real explanation for her shift in attitude. If Hector and Lenore genuinely care for each other, the show doesn’t do much to convince us why. Their relationship is almost romantic, which is a massive leap of faith for Hector, given his new, apparent agency. I never got the impression Lenore loved Hector last season, and it feels unusual here.

Running parallel to this is Carmilla’s desire to rule Wallachia. During Hector’s story, she’s become a kind of Dracula herself, an all-powerful vampire with a desire to rule Europe and make humans (specifically men) suffer. Carmilla dominates the screen when she’s in charge, her anger and sorrow swirling together and frothing over. Her sisters worry for her but also recognise her foolishness, and it’s sad to watch. Without her hubris, Hector’s storyline falls flat. She provides motivation for Hector to regain his forging hammer and eventually escape, and also for Isaac, who, at the end of the last season, looked to be heading toward an all-out war with the coven.

Like his fellow Forgemaster, Isaac has also been through a dramatic shift between seasons, but his feels far more justified. If any character has grown most through the show, it’s Isaac, with every season displaying a new side to the slave-turned-master, who rules over a monster army. But season 4 shows him with more compassion and an understanding of himself and the world. Like Hector’s, this is not where I saw Isaac’s story going, but it’s masterfully done through speeches with his bug friend while sharing berries. He even chats with Hector as the two reconvene after a whole season apart. Isaac has learned lessons from last season and understands what he needs to do to create his own story.

Isaac’s story does conclude long before the final credits roll, but not before he gets one of the standout moments of the show, a long-awaited fight sequence with Carmilla in a room covered in blood. It oozes down the stairs as Isaac approaches, his demonic army in-tow (complete with a Curse of Darkness nod to Abel), and erupts into a gorgeous and dramatic sequence. This is just one of the big fights that demonstrate the experience of the animation team, who have outdone themselves each season. Each fight is better than the last, with episodes 8 and 9 culminating in some of the best sequences in western animation. Between the creative use of Sypha’s magic, Trevor’s variety of weapons, and Alucard’s exhibition of his Symphony of the Night powers (yes, he turns into a cloud, and yes, he does the high jump), I was in awe during every fight.

Speaking of Alucard, I’m extremely happy with how his arc concludes. If any single character deserved happiness after season 3, it was the dhampir, who I was afraid would become the “next” Dracula, locked away in a castle full of regret, sorrow, and pain. And while it initially appears that way, it’s Greta and the inhabitants of Danesti (undoubtedly a nod to the missing Dracula’s Curse character Grant Danasty) who shake him out of that mood. He finds his vigor and his ability to trust humans again. Just as there are bad humans in the world, there are also good ones. His eventual reunion with his companions is all the sweeter because of it. And I need to say it, but Alucard’s SOTN redesign, and the appearance of his powers, are so perfect. He’s just so pretty, and I’m sorry, I could stare at him all day.

But this is Castlevania, and more than last season, Trevor Belmont takes centre stage, especially towards the end. Trevor and Sypha are the souls of the show. They are destined to stop Dracula, but it’s a cross that they struggle to bear. They’ve been through everything and see the very best and worst of the human race. They continue to do so, arguing all the way. New characters like Varney, the self-proclaimed “Night Mayor of London,” and the Targoviste Underground Court guard Zamfir threaten to challenge the pair’s dynamic and strengths, but they never quite match up to past additions. But it’s Trevor and Sypha’s relationship that’s key to making this arc the most compelling, as it explores the weight of the Belmont and the Speaker’s expectations and how the pair deal with everything together.

Perhaps more than any other arc, Trevor’s is littered with series references, like the boomerang and dagger sub-weapons and even open plot threads that hint at future Belmonts. A surprise Dawn of Sorrow boss makes an appearance late in the show too. But it’s Trevor’s one-on-one fight during the penultimate episode with a long-awaited foe that takes the cake. It’s a culmination of everything this show has given us — satisfying references, hubris, discussions of humanity, character growth, and incredible action and animation. It feels like a brilliant final boss that only a Castlevania game can deliver.

And despite the repeated misery, the violence, the swearing, and the struggles, Castlevania ends on a rare happy note. Small moments of bliss are peppered throughout the show; respite for our heroes has been granted but tinged with fear or worry. This ending has none of that. It looks forward, confidently, with an optimism that our cast has rarely been granted. Even when one thread fizzles out with a whimper, the others still end brightly, neatly wrapping up what has come before while leaving the door open for future generations. If you’d told me four years ago I’d cry at the end of a Castlevania adaptation, I would’ve been confused. Even if it meandered at times and got wrapped up in sloppy dialogue and confusing recharacterisations, Castlevania remains one of the best video game adaptations ever.

In fact, I am still confused because the games have never been about characters or story. The show took an action-based series, pulled out all the lore and tidbits, and spun yarn into a rich tapestry of action, blood, and heart. By the end, these characters deserved happiness, despite the mistakes they made. They learned lessons and grew from those, and now they are the builders who will make up for humanity’s mistakes. Trevor and Sypha’s story is over, and where the team of directors, animators, producers, and more decide to go next in this world is entirely up to them. I’ll be there for it.