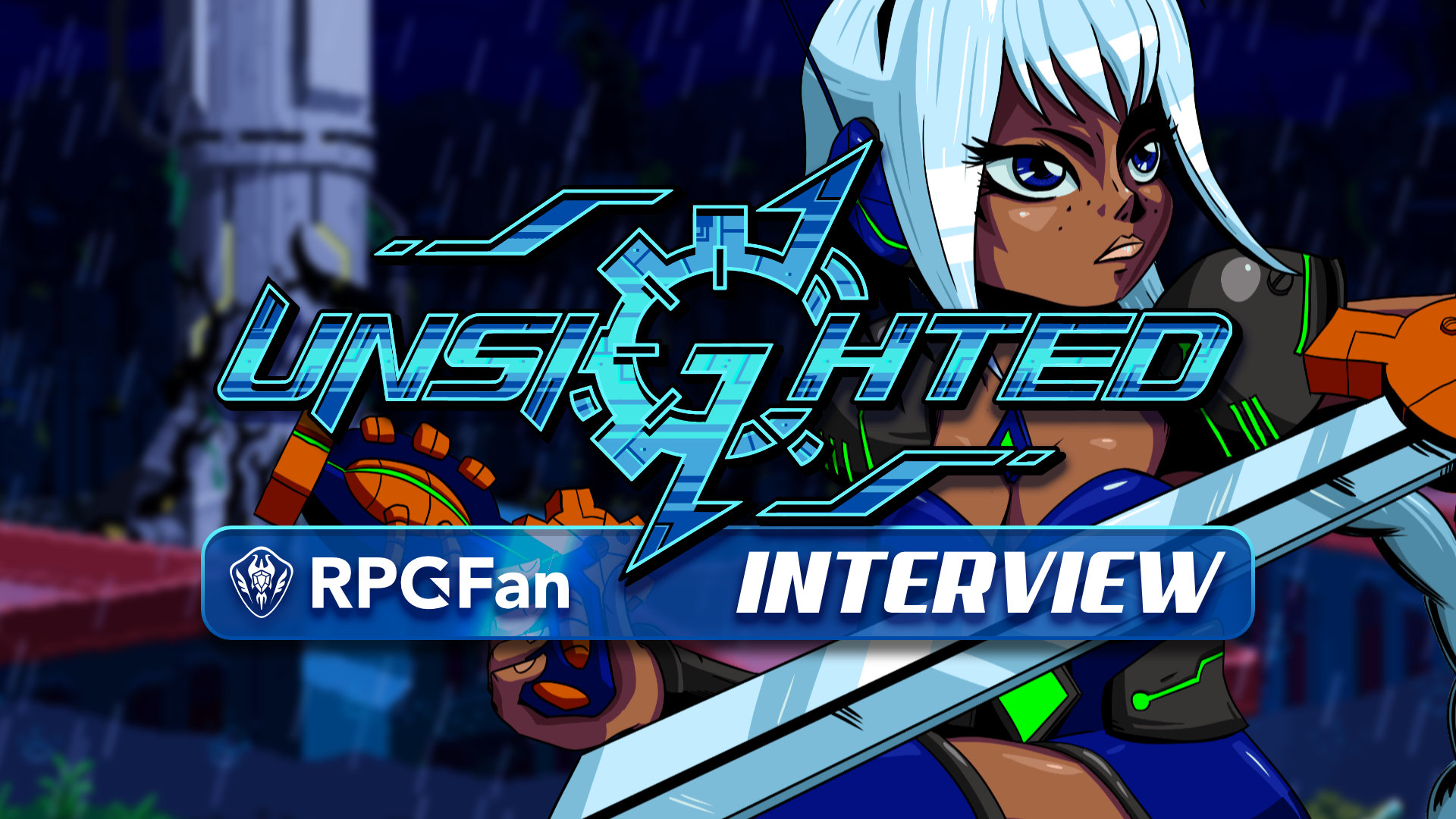 Until late September of this year, UNSIGHTED wasn’t on our radar. Luckily, when we were offered an opportunity to check it out, Bob Richardson picked it up and loved it. Studio Pixel Punk put together a Metroidvania with beautiful pixel art, a solid story, and a remarkable level of freedom to explore the world.

RPGFan: What was your inspiration for creating a game like UNSIGHTED?

Studio Pixel Punk: The main inspirations for UNSIGHTED are games like The Legend of Zelda and Metroid series; we wanted to leverage the familiarity of those games while still adding something new to the mix. We wanted to give the players lots of choices and freedom not normally available on these games, and also make it so the players feel the consequences of those choices.

RPGFan: While most characters in the game are automatons, the cast appears diverse ostensibly. Were you thinking of the characters in terms of race and gender, and, if so, how did you come to the decisions for such a diverse array of characters?

SPP: The real world is very diverse, the diversity in the game is merely a reflection of it. That should be the standard, and we think that not having it is more of “a decision,” actually. So we tried to deliberately include many characters that we didn’t see growing up playing video games, and that are still rare.

RPGFan: Not many games these days advertise sequence breaking as core design, but UNSIGHTED seems to embrace this design decision. Was this the goal from the start?

SPP: Yes, this aspect of the game ties into our main theme: choice. We tried to make it so that the player always has many choices available to them, many requiring some knowledge, others requiring some amount of skill, but they are there. We always loved when games gave us that, and for UNSIGHTED, we wanted to give our players as much of that freedom as we could. We love finding novel uses to familiar items, we love finding different ways of finding those items, we love the experience of finding new shortcuts that you can use to go faster or to just play differently, so we put all of those in UNSIGHTED too.

RPGFan: How did you decide on the world and story?

SPP: We wanted to have a world in which that theme of choice made sense, to tie everything together. So a world in which time is of the essence, in which you have to constantly make hard decisions, which rewards you for knowing that world very well, and mastering the tasks that you need to accomplish to save it came naturally.

RPGFan: Were there any ideas you had to cut or let go of to get the game out?

SPP: Not many, fortunately we were able to implement the vast majority of what we wanted for the game. One thing that got cut out was a trading card minigame, but that didn’t get too far before we needed to work elsewhere.

RPGFan: If you knew then what you know now, how would that have changed how you developed this game?

SPP: We’re not sure, actually. Surely we would make different decisions in some places, and it would be much easier of course — knowledge is a very powerful thing. But we’re very happy with how UNSIGHTED turned out, and we wouldn’t want to change it a lot.

RPGFan: What are you hoping players get out of UNSIGHTED?

RPGFan: Are you planning on updating the game or releasing DLC?

SPP: We are currently constantly releasing patches to correct bugs and tweak small things, but for now we don’t have anything more major than that planned.

SPP: Our favorite thing about UNSIGHTED is how we’re not afraid to give the player choices that many other games are sometimes too afraid to give.

RPGFan would like to thank Studio Pixel Punk’s Tiani and Fernanda for taking the time to chat with us. UNSIGHTED is available on Windows, XBox One, Switch, and PS4.