Persona 5 Strikers Looks to Be The Best Sort of Spinoff 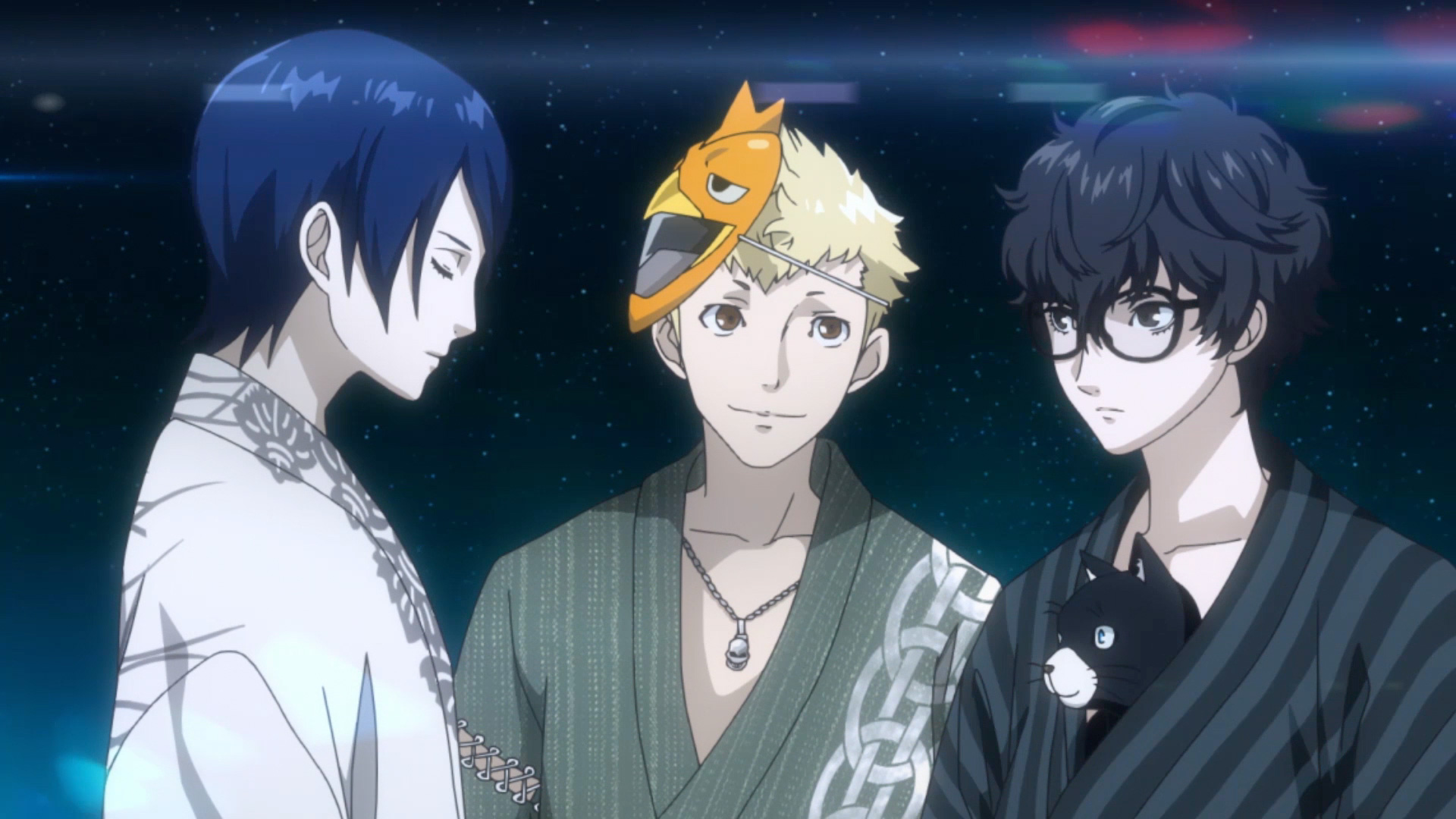 The Phantom Thieves discuss their next move. They plan to “steal the heart” of a high-profile individual whose devious behavior has put people’s lives at risk. As they strategize, college-level philosophical and psychological concepts are name-dropped left and right like there’s some kind of checklist at the bottom of the script. Maybe it’s a little overwrought, but it’s also so charmingly localized that it’s an easy thing to forgive. In between all the big keywords of the conversation, every character gets a moment to shine, offering input that perfectly reflects their evolving worldview. The mission begins in earnest as Joker stylishly traverses a thematically-dense dungeon, sneaking around his foes in an effort to get a jump on them. It’s all so familiar—so lovingly recreated. It’s a fresh coat of paint but unmistakably Persona 5.

Joker rips off a nearby Shadow’s mask, and the remixed version of a beloved battle theme kicks in. And finally, it hits me. The Musou DNA in Persona 5 Strikers, a spinoff and direct sequel to Persona 5, is precisely where it ought to be. It’s in the hordes of foes who soon appear onscreen. It’s in the dashes and kicks and feints necessary to survive in an action-oriented environment. It’s in the moment-to-moment beat-em-up button inputs. When Joker tears that mask off, he reveals Koei Tecmo’s outstanding influence on Persona 5 Strikers, blending the time-tested and controller-smashing gameplay of Dynasty Warriors (and its many-splendored sister series) with the beautiful presentation and thought-provoking discourse we’ve come to expect from troubled Japanese teenagers across the Persona universe.

Here’s a fun fact about Persona 5 Strikers. In Japan — where it’s been out for nearly a year already — the game is called Persona 5 Scramble: The Phantom Strikers. I’ll admit that “Phantom Strikers” sounds pretty spiffy, but in all candor this constantly filled my head with the mental image of the Phantom Thieves gorging on scrambled eggs until struck by a food coma. Some may mourn the truncated title. I’m not one of them.

The battle continues to unfold in real-time. Joker dodges one way and rolls another, slashing his foes with a knife that never dulls. But then something glorious happens. As if this game had a mask on beneath that first mask, the more pronounced Persona gameplay suddenly re-emerges most deliciously: combat temporarily halts when selections are made from a thorough list of skills and spells. Joker and his allies have access to plenty of Persona staples; I spotted stuff like Rising Slash and Mabufula. Rather than relying upon button combos and going all-in with the action, Persona 5 Strikers opts for a middle-ground that blurs the line between hack-and-slash theatrics and turn-based glamour.

There’s a lot going on with Persona 5 Strikers, and much of it seems promising. Over the course of any given stage, you’ll occasionally encounter interactive checkpoints allowing you to not only exit back into the real world but even fast-travel to previously-unlocked locations. If the thought of ditching a dungeon midway gives you calendar anxiety, don’t fret; time passes in this spinoff purely in service of the plot. Yes, that means that Persona 5 Strikers lacks any form of social link system, but given how well most of the party already knows each other, this is the type of Musou-based streamlining that makes sense.

Interestingly, escaping from most battles is a perfectly viable option… provided that you’re willing to deal with penalties. Unfortunately, I can’t say what exactly those penalties might be, but I’m intrigued enough that I’ll purposefully make a speedy exit stage-right at some point to find out. There’s even a gameplay mechanic called “Third Eye” that lights up important trails and other telltale markers. While that’s hardly a new concept in the gaming world, it adds an additional layer of, well, phantom thievery to it all.

One of the cooler little details I spotted in the preview footage is that your party members will sometimes suggest that certain actions be taken. Maybe that means a spell that an enemy is weak against. Maybe it means a quick heal. Whatever it is, following your friends’ advice will net Joker some friendly compliments along the way. Whether or not there’s any greater depth behind this quirk, I’m happy to see so much camaraderie. I’m currently less sold on the fact that if Joker is spotted one too many times as you explore a stage, a full-scale retreat is prompted, kicking you out entirely. Depending on how much that sets players back, I can see it being a source of frustration should the sneaking system prove finicky. On the other hand, if you can dive back in and return to a checkpoint, then things won’t be so bad after all.

My time ogling extended gameplay footage comes to an end when the Phantom Thieves reach a glowing beacon that turns out to be… a dress. At first blush, that might not make a lick of sense, but this is a Persona game through and through; symbolism is everywhere. The dress belongs to an antagonistic fashion idol named Alice — she’s the one whose heart they’re trying to steal. While I would have loved to see more of the real-world side of the setting, the exciting interplay between JRPG staples and Warriors moments has me feeling pretty confident in Persona 5 Strikers‘ overarching quality.

Recent years have seen Persona explode in popularity. Originally a spinoff of its own making, Persona branched off from Shin Megami Tensei and has arguably eclipsed its mother series in the public image. We’ve subsequently seen the advent of Persona fighting games, Persona dungeon crawlers, and even multiple Persona rhythm games. It was only a matter of time before Persona made its mark with a Warriors entry, though I once dreaded what that might look like. A more straightforward romp with Persona 5 characters rushing across open battlefields and plowing through thousands of Shadows could wear out its welcome rather swiftly, especially if it lacked the charm that makes the Hyrule Warriors games so great.

Instead, Persona 5 Strikers appears to strike a thoughtful balance between two worlds. And by allowing Joker and his friends an opportunity to reunite for a whole new kind of mission whilst maintaining much of what makes Persona 5 so memorable, it has all the ingredients necessary for a solid video game. I can’t yet say whether or not I’ll love Strikers when I get my hands on a copy and experience the whole shebang, but if it maintains the degree of quality that I’ve seen thus far, it just may be the best sort of spinoff.

Persona 5 Strikers is technically a PlayStation 4 game but (as is the case with almost every PS4 game) it’s perfectly playable on PlayStation 5. When asked for details on the matter, Atlus wasn’t yet willing to share whether or not the PS5 will enhance the game from a technical perspective in any major way, but given the sorts of speed boosts we’ve seen from other games, there’s a good chance you’ll at least be spending less time waiting for Strikers to load your file back up if you’ve got Sony’s shiny new console.

Purchasers of Persona 5 Strikers’ Digital Deluxe Edition will be able to play the game four days earlier than its February 23rd launch date as that version exclusively unlocks on the 19th. The Digital Deluxe Edition’s extra goodies include an artbook, 40+ song soundtrack, and even a behind-the-scenes look at the making of the game’s music. Those who prefer to own their games in disc form can look forward to some snazzy preorder items of their own, which so far includes a Joker pin for GameStop customers, or a Nintendo Switch SteelBook exclusively at Best Buy.