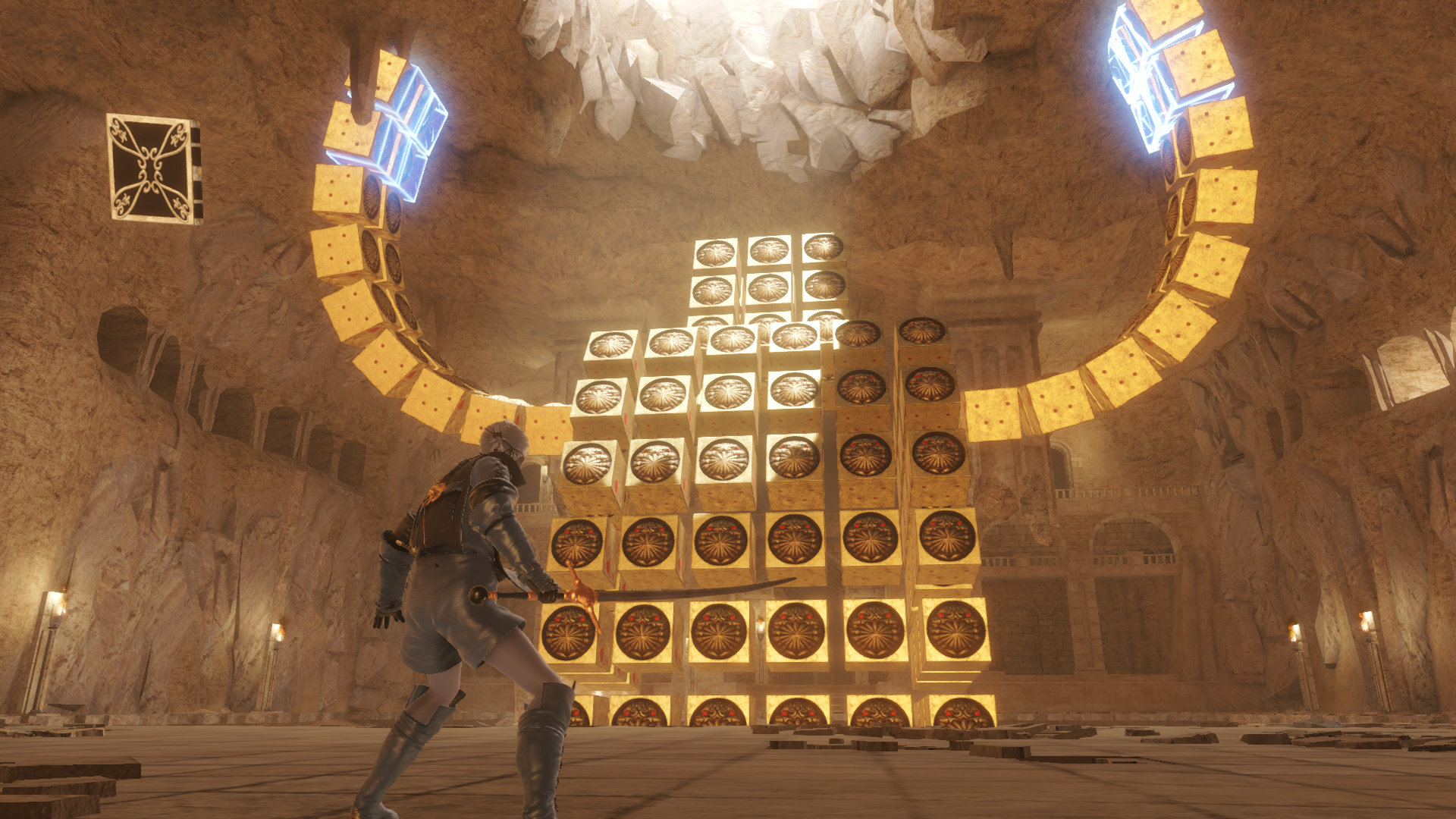 With just over two months to go until the release of NieR Replicant ver.1.22474487139…, Square Enix have surprised us with a brand new gameplay trailer for the game. This is the most NieR Replicant content we’ve had since the Tokyo Game Show last year, and this new trailer shows off a few of the game’s most iconic locations, and characters for the first time.

There’s nearly nine and a half minutes for us to take in, so let’s not waste any more time, because I certainly didn’t when this first dropped!

The first thing to notice is that this gameplay trailer is fully voiced! It sounds like Liam O’Brien and Laura Bailey are back as Grimoire Weiss and Kainé respectively, which is one of the things fans were most worried about. The dialogue has been reworked too in some cases, which means the voices have all been rerecorded, and you can tell from the delivery of some of the lines. It sounds fantastic, regardless. This is also the very first time we’ve heard younger Nier speak!

While the trailer is dubbed “The Barren Temple Gameplay,” the first 3 minutes are dedicated to the desert city of Façade. This glimpse shows us plenty of things about the town, from the unusual Masked People who speak in a foreign tongue, to the sand waterfalls and rivers cascading and weaving under the bridges and around the buildings, spread over multiple layers. It’s one of the most iconic and memorable locations in the game for me, and I’ve got fond memories of jumping around and getting lost in the city. I can’t wait to do it all again.

One very brief point worth noting is the mailbox near the beginning of the trailer (and another later on), which is how you save the game. Very different to the Access Points in NieR: Automata, which in some cases are just vending machines, right? The rearranged version of “The Prestigious Mask” is also beautiful, with more of a focus on piano and violins at the start. The violin carries all throughout this version, and it’s a lovely rendition of this song.

We also get a snippet of a few of the games loading screens, which depict pages from Yonah’s (Nier’s sister) diary. There’s also a callback to the original release’s other loading screens, with Yonah’s white silhouette running on a black background.

After this, we get into the combat of the game, which we’ve seen plenty of at this point, but it looks like a fantastic improvement over the original. The Barren Temple shows the shifts between gameplay that both NieR and Automata are famous for, with a 2D platforming section, and a more panned-out camera for combat. Animations look much more fluid, and we get to see Nier’s swordplay as well as Grimoire Weiss using projectile attacks when the larger shade appears in the first room.

Another side note: Grimoire Weiss only ever appeared when you needed to use magic in the original release, but he’s present throughout the trailer here. It’ll be nice seeing our eloquent, sarcastic tome floating next to us all while ribbing Nier and Kainé.

We also get to see the entirety of one of NieR Replicant‘s boss fights too, which involves everything you think a NieR boss should involve: bullet-hell, changing perspectives, unusual designs, and lots of chipping away with ranged attacks. I don’t think any other game can get away with a boss made up of sentient cubes without so much of a raised eyebrow, but fans will remember this boss can get a bit tricky, so maybe take this opportunity to study away!

There’s a few more new arrangements to delight your ears in the Barren Temple too, with two of my favourite tracks, “Temple of Drifting Sands” and “Gods Bound By Rules,” getting their time to shine. The former’s vocals in particular have been reworked, and they’re much gentler at times, which adds to the mystery of this temple. I won’t spoil everything, but listen for your favourites and see whether you like them!

Speaking of music, Square Enix have also released a few videos showcasing new arrangements of some of the best tracks from the game, “Snow in Summer” and “Kainé,” and a longer video with 10 samples from the Weiss Edition Arrangement tracks, which will be included in the White Snow Edition of the game. You might remember this version of “Kainé” from the Tokyo Game Show trailer last year; it sent chills down my spine then, and is doing the same right now as I listen while I write. Listen for yourself:

These versions all sound a bit different from the originals, and it’s not clear whether they are in addition to the in-game arrangements, or if these are indeed the versions that will play in the game. Except for the Weiss Edition Arrangements, which sound closer to the arrangements on the NieR Gestalt & Replicant 15 Nightmares & Arrange Tracks and the NieR: Automata Arranged & Unreleased Tracks. I will honestly take any kind of interpretations of two of the best video game soundtracks of all time, because you can’t really ever have enough NieR music, can you?

That’s a lot of stuff to dig into, and it’ll keep me quiet for a little while longer while I await the release of NieR Replicant ver.1.22474487139… The game launches on PS4, Xbox One, and Steam on April 23rd here in the West, so book some vacation time for around then so you can enjoy one of the diamonds in the rough from the PS3 days, distraction-free.