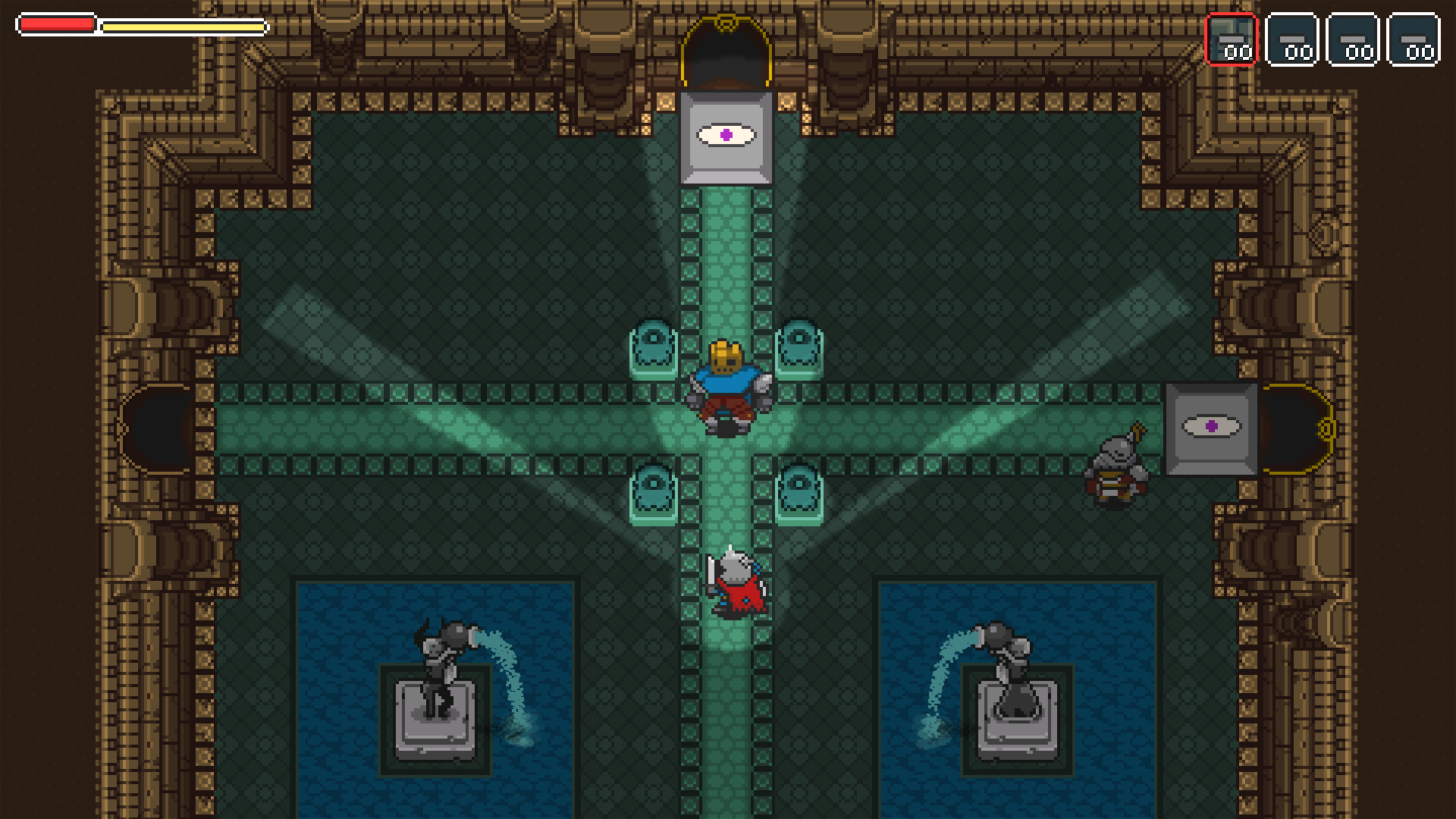 Good Night, Knight is an indie action RPG roguelite currently in alpha. As such, much can change after this preview is written. But what I’ve been able to glean, thus far, has been promising, though not without shortcomings. As one can expect from indie games, many of the ideas here are simple, yet novel, while the production values are lacking and similar to other titles — in this case, The Legend of Zelda: A Link to the Past.

At its core, Good Night, Knight is a top-down action RPG with simple combat largely revolving around wide, arcing sword slashes in front of the hero. Currently, this is probably the weakest aspect of the game, and not for its simplicity, though that certainly doesn’t help. For some reason, the combat feels extremely sluggish, and I never feel in control of my character. When I swing, there’s a huge delay afterward that leaves me open to attacks, so I have to be sure to land each blow in order to stagger the enemy. This doesn’t necessarily make the game difficult, because death has a small penalty — a loss of resources — and elevators that lead back to town appear after every few floors so players can restore health, upgrade equipment, and replenish item ammo for little cost.

What excites me about Good Night, Knight is equipment upgrades. Similar to Final Fantasy IX, each found or developed item gains experience while traversing the dungeon, and when the experience meets its threshold, the item loses its weight, allowing the player to hold it for free. Currently, each item has a nominal weight, with the player boasting a maximum weight limit of 14. This could normally make for interesting decisions about what to equip or not and where experience should be allocated before entering the dungeon, but items reach their maximum level so quickly that these decisions rarely occur. Several items are available to craft that offer unique abilities, but resources are so rare that this feels more like window shopping than actually walking into the store and bagging some goods.

Most items revolve around inherent abilities, like sneaking and jumping. For instance, some items will offer invulnerability or more control over direction while jumping; others allow players to grab enemies while sneaking around. Presently, jumping seems like it needs more fleshing out. Sneaking, like combat, feels a bit sluggish and unsatisfying. Line of sight is incredibly important in this game, as some players have a cone in front of them to illuminate enemies. The same sort of functionality seems to exist for enemies who gradually fill up a question mark when they notice the player, giving the protagonist the option to hide in order to deplete the question mark to defuse the situation. Curiously, my brother who played with me in local co-op had an entire circle around him to assist with vision.

The local co-op plays fine, with the friend mostly there to assist with combat; the host player gets to engage with the few puzzles that exist, and decides which direction the team goes. This is probably the best way to do the co-op, and it flowed well for us. The co-op felt especially welcome during the boss fights we engaged in, which are grueling, but well-designed. The bosses have several attacks and traps going on at once, forcing players to actively engage rather than passively wait for an opening. For example, one boss is a giant flower that instantly hooks players and slowly drags them to the center. Players have to push themselves away, while simultaneously attacking small flowers that grow out of the ground. Since attacking prevents movement, players can’t just slash slash slash, they must balance fighting with running away from the chomping teeth at the center. Also, the actual weak point of the enemy exists on each corner of the room. Finally, the flower has a rotating, thorny appendage that players have to run away from. I have rarely encountered a boss fight with as much going on as this one, yet it never felt like too much.

As far as the writing goes, little story exists at the moment, and the few jokes we read were hit or miss. On occasion, Good Night, Knight plays on video game tropes, but has moments of legitimately laugh-out-loud humor. I’m not so worried about the writing, as most roguelikes and roguelites are more about the gameplay than the story, but what’s here demonstrates potential for at least a lighthearted journey.

For the moment, Good Night, Knight has unique, fascinating ideas, but those design decisions are mired in cumbersome gameplay. I’ve enjoyed myself so far, but I always felt a tinge of frustration as I found myself fighting with the core mechanics. As this is an alpha build, I have hope that the developers can get this right. If you want to support a promising project from a small studio with that cozy indie vibe, you could certainly do worse than picking up this game on Steam.