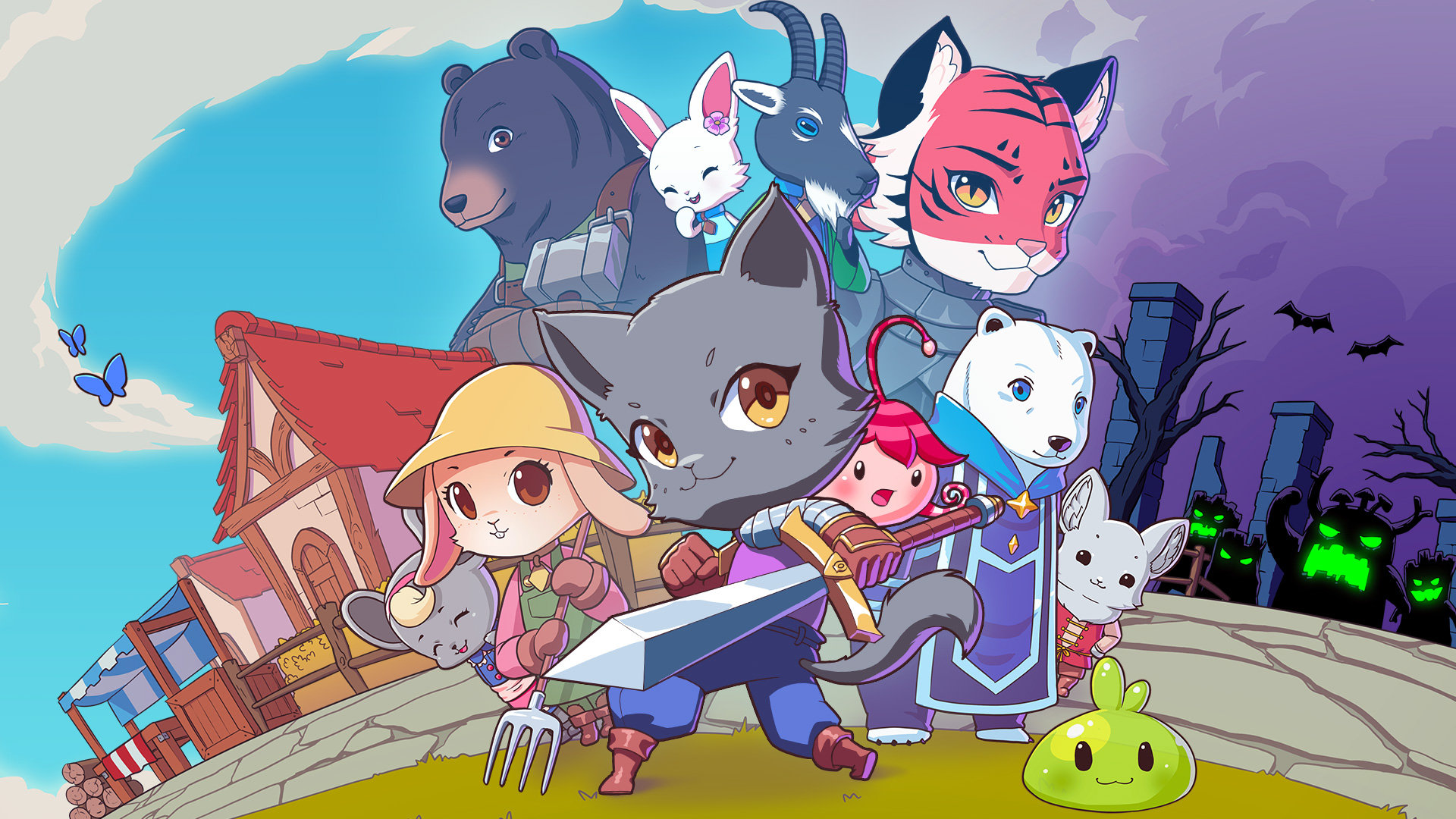 Revealed in earnest back in Autumn 2020, Kitaria Fables showcased a wondrous-looking land populated by furry friends, cozy homes, and plenty of adventure. Publisher PQube recently hosted a digital preview event, showcasing more of what this cute farming sim action RPG from developers Twin Hearts has to offer gamers when it releases this September. I spent a few hours with the Steam version of the game, and it’s shaping up to be a delightful experience.

The opening cinematic briefly elucidates the backstory of a land called Canoidera, once afflicted by a malevolent force known only as “The Calamity.” It caused the normally peaceful endemic life to become aggressive monsters, plaguing the land’s inhabitants until a group of heroes somehow quelled The Calamity. What followed were years of peace and prosperity until this new story takes place. Enter our hero, Nyanza, an anthropomorphic cat-person and Imperial soldier from the Capital. His companion, Macaron, is a small, pink creature who is also an alleged soldier (it talks big, but I’ve yet to see it fight anything!) that does all of the talking for you. Together, they’re charged with investigating Paw Village, a small town on the fringes of Imperial territory recently troubled by monster attacks outside its borders. It soon becomes clear that this rash of attacks is a precursor to a greater tale that puts the fate of Paw Village and the entirety of Canoidera squarely in your paws.

The story isn’t breaking new ground, and its seeming early twists are clearly telegraphed. But it stars a so-far engaging, well-written cast of creatures that make the adventure compelling enough to follow. Kitaria Fables skirts the proper balance of levity, mystery, and drama with enough animal-related puns to entertain. As Nyanza, you don’t seem to get much of an active role in the story, as Macaron serves as your spokesperson in story sequences and interprets your emoticons for players and NPCs alike. Combined with the fact you can swap out the look of your fur at will in your home, Nyanza is a blank canvas. Depending on how you look at it, this offers total player freedom to interpret Nyanza as you see fit. Or you’ll feel completely disconnected from this hero analog. Macaron thankfully seems to have enough personality for the both of you, so I don’t feel I am missing out much. While I’m reasonably confident I know how it’s going to end and what the “true enemy” will be, I’m interested in finding out HOW that comes about and learning more about the lore of this fascinating world.

Even in its earliest trailers, the inspiration for Kitaria Fables is evident and confirmed during the preview event. Fans of titles like Rune Factory, Harvest Moon, Story of Seasons, and Stardew Valley will feel right at home in many ways, but there are some notable changes to the expected formulas. Foremost, Kitaria Fables seems more an action RPG first, with the farming and crafting elements relegated to supporting you through your quest. The game’s progression and relationships with NPCs are governed by following the various quests offered to you, and there are no options for romance. Your quests range from expected fetch and foraging tasks to defeating specific foes, but do an excellent job of forcing you to explore Canoidera and introduce most of the game’s basic mechanics along the way. That said, there is no sense of urgency to the storyline aside from what players will impose upon themselves.

The game allows you to set aside your weapon in favor of farming for as long as you please, stocking up on ingredients and wealth until you’re ready to adventure out once more. Managing your farm is a little different from others in the genre, tilling the available plot, planting and watering seeds, then throwing them in your sales bin at the end of the day. It’s the most basic form of the system, with no complicated splicing or fertilizing required to raise the value of items and the like. You’ll either sell your sundries or bring them to the local cook to combine into recipes that yield powerful power-ups in combat.

Conversely, you could forgo farming altogether, choosing to hunt monsters in the wilderness and sell their loot for Paw Pennies instead. Though the world is large, brief loading screens connect the map’s small regions, locked by quest progression. To hasten travel, you can find checkpoints allowing you to teleport from any hub town. Generally, getting around is pretty easy, but I would love if Nyanza moved a touch faster (though I suppose there is gear for that).

Combat is straightforward but nicely streamlined and responsive. Playing the preview on Steam, I could use the keyboard or controller interchangeably, able to map the controls to suit me, though I don’t know if consoles will have the same level of customization. I also appreciate the addition of a toggle-able lock-on, though it doesn’t always find the nearest enemy or the one you’re facing. Thankfully, you won’t always need it, as the refined controls and subtle auto-targeting ensure hitting your foes and dodging their attacks aren’t a chore, whether fighting up close or at range.

Through combat, you gain no experience, with character growth instead determined by the gear you equip. The further you adventure from your farm hub, enemies predictably get more challenging, amounting to higher defense, hit point totals, and attack damage. Thus, you can theoretically take on any enemy in the game whenever you want with enough skill and patience, but one wrong move will likely end your adventure quickly. Unlike similar games, getting knocked out only causes you to miss the remainder of your current day. So, if you’ve done your daily farming tasks, the setback is pretty minimal.

What makes combat interesting in Kitaria Fables are its various playstyles. While you start with a beginner sword, it doesn’t take long to obtain the power of magic and a bow through questing and crafting. Between your sword, bow, and the four elemental magic types, the game boasts 50 different attack combinations to keep gameplay fresh. As Nyanza has no character class, you’re free to play with whatever suits you, and you’ll be able to craft new spells, weapons, and learn new techniques to unleash in battle with minimal cooldowns between attacks.

While I haven’t crafted much gear for myself yet, window shopping reveals there’s more to the armor, headgear, and accessories than simply buffing your defense. You’ll be able to play with combinations of gear to adjust magic defense, movement speed, or resistances, adding more strategy to the crafting component of the game. At the moment, it seems you can only craft gear by visiting the local vendors in the towns, but I’m hoping you’ll be able to expand your homestead to accommodate a crafting setup later in the game.

Another welcome addition to the formula is couch co-op play. You can have a friend hop in and hop out with their own feline warrior in a shared screen session. They can help you farm and fight from start to finish, allowing you to get through the game more efficiently. In addition, enemy difficulty doesn’t scale, so it will make the experience more manageable as you pair up and find fun tactical solutions to more formidable foes. While Kitaria Fables is coming to all current-gen platforms alongside the PS4 and Xbox One, unfortunately, there is no cross-play planned. Still, the game is approachable for gamers of all ages, making it a great family experience at home, requiring no additional game copies.

Whether solo or with a friend, developer Twin Hearts is crafting a delightful setting for players to explore. The world portrays a cartoon/storybook style that’s captivating. Character designs are vibrant and diverse, assets in the world have fun proportions and pop with color, and the UI is crisp, clear, and you can adjust its size. Enemy designs aren’t revolutionary, and their attacks lack some flair, but there isn’t much else to complain about in Kitaria Fables’ presentation thus far. Musically, the ambient soundtrack is calm and suits the world, but nothing stands out to me yet that remains in my head once I turn the game off. For better or worse, it’s unintrusive. The game’s tone is evident and well-executed in every detail, with a polished, cohesive presentation that makes it a joy to play.

In the Q&A, PQube’s Head of Development, Harrison Lewis, noted the overall experience could be as short or long as needed, with a focused playthrough averaging around 30 hours. However, he couldn’t speak much to endgame content beyond hinting that there will be some optional challenging monster fights. Additionally, and equally sparse on details, Lewis confirmed that DLC is in the works for Kitaria Fables.

Overall, this sweet, cozy, simple action RPG farming sim is shaping up wonderfully. While I find the story fairly rote and its systems more basic than I’d like, it’s also kind of welcome. It’s nice to know I could pick this game up, adventure a bit, and put it down just as quickly, not having to invest myself overmuch and pore over forums or game guides, learning to harvest the perfect carrot or craft the ultimate sword. Equally appealing is that it’s so accessible for kids like my daughter, and I welcome the ability to hop in and play with her or help out with a challenging boss fight. Twin Hearts and PQube have a magical little world on their hands that offers a lot to explore, so I look forward to more updates as Kitaria Fables nears its current launch date of September 2nd, 2021.