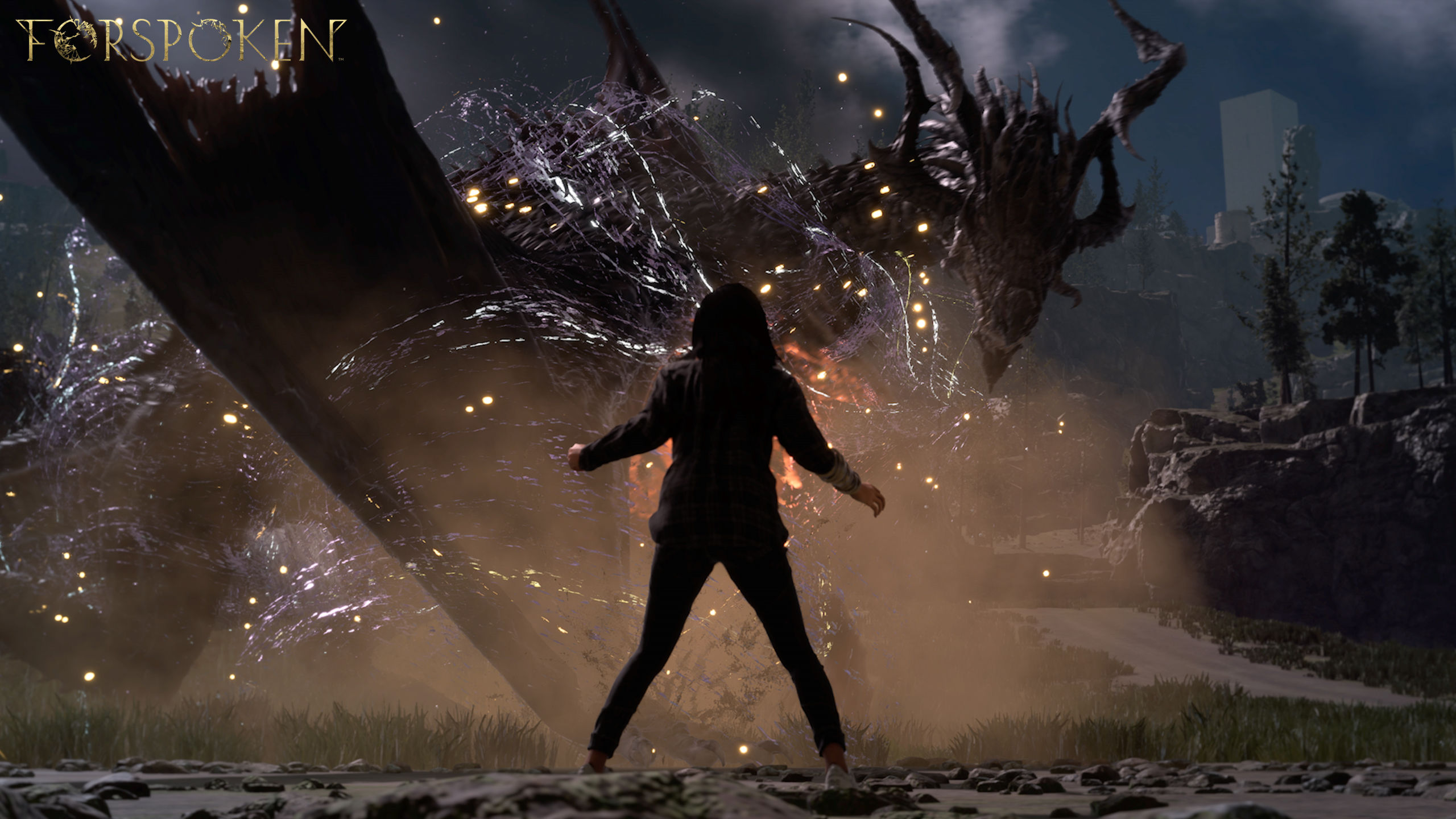 Recently, I had the opportunity to view an online preview of Square Enix’s Forspoken. The event started with an overview of Luminous Production’s goals for the upcoming PC and PlayStation 5 game powered by their Luminous Engine, as well as insight into the action RPG’s story. As it was a hands-off preview, I didn’t actually get to play the game, but I can tell you about what I saw and what the developers said about the gameplay. I did come away from the preview impressed, especially with how Forspoken‘s team comprises of both Japanese and Western developers, a result of Luminous Production learning a great deal from Final Fantasy XV‘s development and saying they desired to create a game with global appeal following it, which meant working together with those outside their own development circle. That co-development is rather fitting for a title that touts “culture clash” as one of its significant narrative beats.

Forspoken follows Frey Holland, a young woman down on her luck who just wants to leave New York City with her trusty feline companion Homer, named after the famous poet who penned The Iliad and The Odyssey. What starts off as a pretty realistic concept dramatically shifts when Frey encounters a mysterious portal that sends her to another world known as Athia, a magical realm that is not without its own troubles. With a talking armlet called Cuff, Frey traverses the often dangerous and deadly terrain she now finds herself in, putting her newfound magical abilities to the ultimate life-or-death test.

Cuff and Frey banter throughout their travels together, which offers insight into both characters and the world of Athia. The dialogue, particularly how Frey reacts to events happening around her, will evolve over the course of the narrative. They stated that Frey’s voice and motion capture actress Ella Balinska was integral in ensuring that Frey’s portrayal was accurate. In addition, Luminous Productions used several BIPOC consultants to ensure that the story is accurately told from Frey’s point of view.  Athia is a matriarchy, and Forspoken centers on Frey’s personal development and journey in this unusual world. A group known as the Tantas, crazed sorceresses who rule and control Athia, are key figures and, while Forspoken is going to be a self-contained story, prequel DLC is also planned after launch, called In Tanta We Trust, but we will find out more information on that in the future.

The gameplay portion of the preview started in the last remaining city of Athia, Cipal. Luminous Productions mentioned that early gameplay takes place in New York City to give you a feel for that environment, though they did not wish to reveal if there would be a return trip to Earth in store. In Cipal, the ragtag remnants of humanity have gathered to seek shelter from a strange miasma known as The Break, which causes anything it touches to either die or transform into horrific, monstrous creatures. Frey is the only person unaffected by The Break, though many people she encounters in Athia see her as “demon spawn” in light of this. The developers stated that Frey will meet and interact with people from all walks of life and that you can take sidequests to learn more about Athia and its denizens. However, we didn’t get to see this in the preview as Frey moved swiftly to reach the city’s outskirts, where few dare to travel.

Throughout Forspoken, Frey travels from area to area in a vast open-world environment using what is being touted as “magic parkour”: speedy, agile moves that seem to open up literally every expanse of Athia to exploration. We saw acrobatic jumps and vertical maneuvers as well as swift forward movement. Getting from one point to another seems quite entertaining, and the magic parkour flowed smoothly into combat once enemies were sighted. The map helps to keep story objectives in mind, but if you are craving to uncover more of Athia, there is still plenty to explore outside of those markers.

Combat in Forspoken seems just as fast and fluid as the parkour. Frey has a wealth of magic spells at her disposal, and when she gains enough experience points, she can acquire new spells from a skill tree. These range from more direct attacks to long-range projectiles to traps, and it looks like you can even tailor spells to button shortcuts. It seems like Forspoken also encourages players to find the fighting style that works best for them, as it offers a wide range of options. Sometimes combat can, and should, be avoided, as seen during one section where Frey went invisible to avoid a tough group of foes to reach her destination safely. From how you choose to approach combat or even how you might not, there appears to be a hefty amount of versatility to fighting in Forspoken. Frey’s magic serves as her weapon throughout the game instead of relying on the traditional fantasy arms suchs as swords or other more typical weapons.

Since traversing Athia can be rather exhaustive, you’ll run into the occasional safe house. These shelters provide Frey with a place to rest and restore her energy in peace, as well as an area where she can use resources she’s collected to create items or upgrade existing ones. The crafting appears simple enough to use from its brief showing during the preview. Frey can also equip cloaks and necklaces to bolster her stats, and players can even have special patterns painted onto her nails that help amplify aspects of her magic, so it looks like customization plays a vital role throughout Forspoken. According to the developers, the nail system stems from Ancient Egyptian and Ancient Babylonian roots amongst other historical cultures. Painting your nails has great cultural importance in Athia, though Frey sees the matter from a more present-day perspective.

Athia is a constantly evolving world, with environmental changes impacting gameplay from time to time. As the preview reached its final stage, a “Break Storm” suddenly fell over Frey. These storms change the overall appearance of the area and are home to incredibly challenging monsters. With Cuff’s encouragement, Frey puts up a good fight, but when an enormous monster appears, it’s soon game over. The last part of the stream showed a Quick Load option should Frey’s journey have an abrupt ending.

Overall, I was quite impressed with this early build of Forspoken, and I am looking forward to seeing just how the game progresses the further along in its development it gets. Portions of its gameplay and visuals remind me somewhat of the stronger components of Final Fantasy XV, and I was impressed by the scope of the environments as Frey traversed across them. If I had one concern at the moment, I think it would be that there’s a sense of “loneliness” permeating the overall game outside of the overcrowded Cipal. Given the plot emphasis on “finding oneself,” that might be very intentional.

Forspoken releases on May 24th 2022 on PS5 and PC. Even at this stage of the game’s development, it has quite a lot of promise. After this preview event and the recent Game Awards trailer, I’m looking forward to seeing more from Forspoken in the future, and I hope to travel Athia alongside Frey and Cuff.