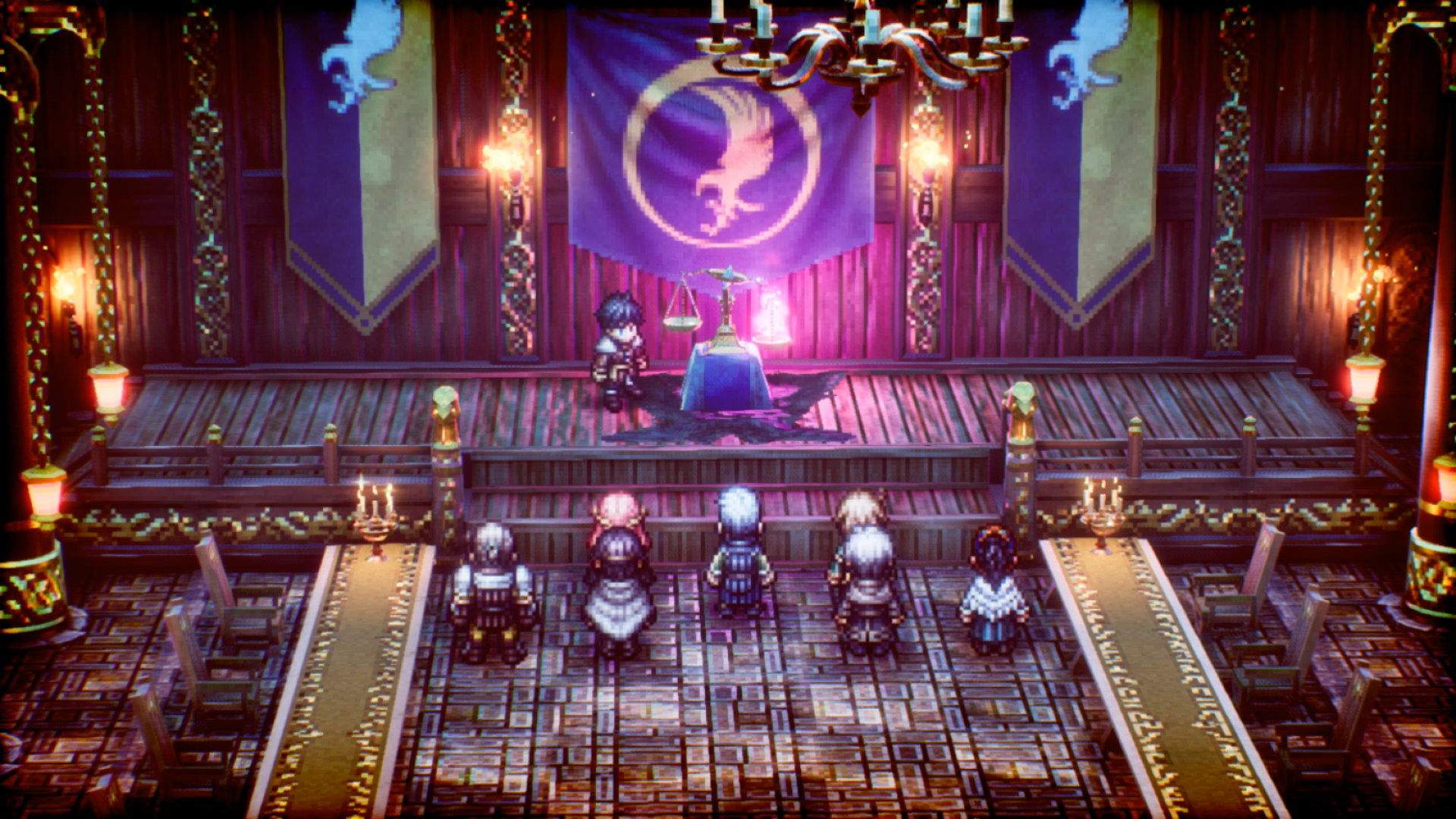 Demos that transfer their save data to the full game are always welcome. There’s really no way to better prepare players for the final release than by providing a part of the game itself—and in our busy times, data transfer is also a huge boon. This feels all the more exemplified in the Triangle Strategy Prologue Demo, which offers a hefty helping of the upcoming SRPG’s first three chapters, and provides a sample of the game’s unique attributes.

The three chapters in the Prologue Demo each have their own required story-related battle, giving players ample opportunity to get accustomed to its mechanics. Moving and attacking are standard fare for the SRPG genre, but the TP system and turn order add welcome variations to the formula. Each character gets 3 TP and one point regenerates at the start of their turn. Every skill a character may have can cost anywhere from 1 to 3 TP, and knowing the character will get 1 TP back the next time their turn comes around adds an extra layer of strategy to skill usage, giving them a fair limitation in line with their strength. Players will need to think ahead if they don’t want to get caught lacking the TP to activate a particular skill at a critical moment.

The turn order displayed at the bottom of the screen helps players in strategizing their upcoming moves. Instead of moving all allied units at once and splitting the game into an “ally” and “enemy phase,” each unit’s turn—enemy and ally alike—comes around based on their speed. While this can take some getting used to for those more used to phase-based games like the Fire Emblem series, it’s a welcome deviation. It’s not enough to just consider who is closest to your units but who is moving when and how that may alter the upcoming turns of the battle.

The battles also offer some opportunities to play around with Triangle Strategy‘s unique incorporation of terrain. Not only do back strikes land guaranteed critical hits, making positioning more crucial than ever, but attacking from a higher spot also deals more damage than striking from the same or even lower elevation. Elemental skills may also mess with the environment: fire skills may melt ice, for example, leaving the squares wet. Wet squares conduct electricity, and ice may freeze over these squares once again. In addition to skills, some consumable items also exhibit these properties, giving especially tactical players the chance to try spreading fire around with the power of wind. The only spellcasting unit I recruited on the route I went down used fire magic, but items are available for anyone to use.

Although any character can make use of any item—at least, thus far—they can’t make use of each other’s skills, at least early on. Triangle Strategy‘s characters in the first three chapters are all entirely unique; I picked up a second archer, but his skills were more offensive than my other archer, whose abilities were more supportive. Each time a new character joins, a tutorial window opens specifically naming them and their skills, making it seem as though their class is exclusive to them. This may not be the case further along in Triangle Strategy, but it’s promising to see characters in an SRPG feel truly unique from each other, not just in personality but in the way they play. It’s all too easy for certain units in other SRPGs to feel directly outclassed by others of the same class, but the Prologue Demo gives everyone a chance to feel relevant and distinct without much overlap.

Even if you can’t bring each unit into a main story battle, there are chances to keep their levels up to par and make use of them in mental mock battles. There are two different mental mock battles in the encampment’s tavern in the Prologue Demo, each presenting a different battle scenario, including a pincer attack. These are great to practice specific strategies, and any experience earned is kept, making them welcome opportunities to prepare for upcoming mandatory fights. Even on Normal difficulty, and after having played both mock battles, a few of my units still fell in the required fights. It’s easy to appreciate the extra experience gained from these mock battles, as well as just how much strategy must go into them—even this early in Triangle Strategy—to play them out without deaths.

Although I say “deaths,” character deaths aren’t permanent in Triangle Strategy, which helps enforce the uniqueness of each unit since replacements won’t be necessary later down the line. Aside from battles, though, the demo offers multiple forays into exploration segments. Players scour their surroundings for information to pick up stray goods and coin. Some of this is pure lore, some of which gets stored away in the menu’s “War Chronicle,” where players can read back on documents at their leisure. Other information proves to have relevance later, as the more information the protagonist Serenoa gains, the more dialogue options he gets in certain scenarios. Dialogue choices come up very frequently, and these look to be building towards major story branches later down the line.

During the demo, players can see one such story split after a voting session. Whether the group goes to Hyzante or Aesfrost is decided by vote, which the player can try to influence through conversation. The events that play out are entirely different based on where the group goes, including a different recruitable character joining the group. There promises to be even more branching story elements in the full game, and having such a big deviation so early on serves as a great introduction.

The Prologue Demo also prepares players for the game’s story, and there’s a lot of it. Although main story battles got lengthier and tougher with each chapter—with mock battles adding to the overall gameplay time—the demo feels as if there’s just as much, if not more, story than gameplay, especially if you watch all the side-story events. So far, it’s all enjoyable, mind: political intrigue with just enough individuality from the characters to really start growing attached to and invested in their plights, but such focus on the story may not be everyone’s cup of tea. This is all the more reason to welcome the demo, which gives a good indicator of just how story-driven Triangle Strategy will be.

Triangle Strategy releases worldwide on March 4, so especially dedicated players may even try the demo multiple times to see both Hyzante and Aesfrost and the two recruitable allies. However, even if you only play through it once, it’s still worth checking out to see how much you like the mix between story and gameplay. The game is definitely shaping up to be an enjoyable one for fans of SRPGs and story-driven games, and another welcome title from producer Tomoya Asano of Bravely Default and Octopath Traveler fame.