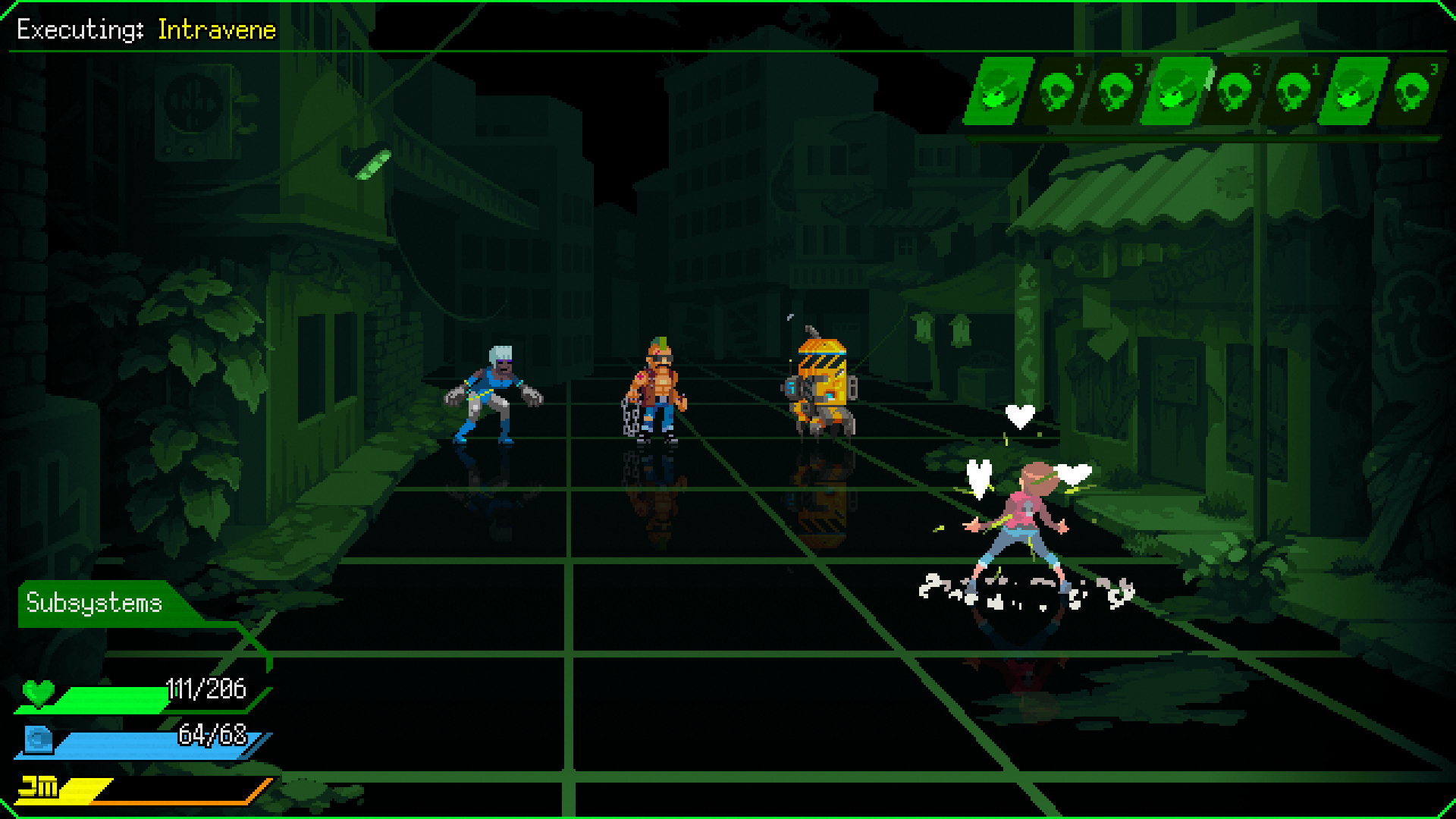 Jack Move is an upcoming Japanese-style RPG with its finger on the pulse of multiple retro trends. I first caught wind of this game in 2020 and have anticipated it ever since. Not only does Jack Move‘s style play into the growing trend of pixel-art games inspired by the 16-bit era, but it also plays into the retro-trend of 1980s cyberpunk. I had a chance to sit down with the Steam Fest 2022 demo (available from 2/21- 2/28) and, long story short, I’m still looking forward to this game.

Players take on the role of a sassy girl named Noa. She and her friend Ryder are hackers gathering intel on the Monomind corporation for reasons unrevealed beyond simply paying the bills. Noa is like an anti-hero version of the cartoon character Kim Possible as she infiltrates a Monomind office building and uses gadgetry built by Ryder, who (like Wade in Kim Possible) helps Noa remotely from his secret computer lab. The demo took me through a Monomind office building dungeon that culminated in a boss battle before giving me a glimpse into Noa’s home life.

I like Noa’s outfit and her adorable post-battle “V for victory” pose. The pixel art sprites look great and animate smoothly. The environments have lots of detail and the lighting effects really bring the game’s world to life. The font is pixelated but is decently sized and easy enough to read. I enjoyed Jack Move‘s music as well. The soundtrack consists of funky yet atmospheric electronic music that’s more “listening techno” than “dance hall techno.” The sound effects are nicely done and enhance the atmosphere of Jack Move‘s world.

Jack Move uses turn-based battles, and they are strategic in that buffs, debuffs, and picking the right skills to exploit enemy weaknesses require a more Shin Megami Tensei mindset. Because Noa is the only one fighting, battles sometimes take time, especially if there are multiple enemies or enemies come in waves. Battles occur randomly, but there is a threat level indicator in the top right corner of the screen to ensure you’re not completely taken by surprise. In this and prior demos of Jack Move, Noa was the only combatant, and I get the impression that she pretty much works alone. However, I hope Noa either learns some area attacks or eventually learns to play well with others in the full game, otherwise all those random battles could drag. For those interested in playing for the story, there is a menu option to add a battle menu command that allows players to win battles instantly.

Equipping active and passive skills into limited slots reminded me a bit of Final Fantasy VII‘s Materia system, and I think I’d have a lot of fun assigning skills to the limited spaces to best handle in-game situations. Special attacks are categorized as Wetware, Cyberware, and Electroware and work in a rock-paper-scissor fashion depending on the opponent. It’s good to use these skills often, as they level up with use. As Noa dishes out and takes damage in battle, the Jack Move meter fills up. Once full, Noa can unleash a Limit Break style attack called a Jack Move. Successfully executing a Jack Move requires a sequence of timed button presses, but there is a menu option to bypass those timed button presses for those who lack dexterity.

The interface features a bright green color scheme atop black backgrounds reminiscent of 1980s computers running DOS. It was a bit overwhelming on my eyes at first until I got used to it. There is some flickering and flashing in the menus and title screen, so an epilepsy warning would have been appreciated. The menus’ flashy style makes them seem cluttered and overwhelming at first, but once I slowed down for a minute, I realized that they’re far more intuitive than they appear. Icons are large and make it easy to figure out what the cute names for stats (e.g. Grok, Sass) are the equivalents of (e.g. “magic” offense and defense). Battle commands have cute names for basic actions as well. For example, “hack” is physical attack, “execute” is a special skills attack, and “cache” is defend. Yes, getting used to new terms for basic JRPG functions takes a little mental effort, but it works to immerse players in the Jack Move world.

Based on what I experienced in the current demo as well as last year’s, I continue to be increasingly intrigued by Jack Move. I want to journey with Noa and learn more about her, her world, and her quest. Jack Move is slated for release later in 2022, and the Steam Fest demo is available from 2/21- 2/28.