Posted by Abraham Kobylanski on February 28, 2022 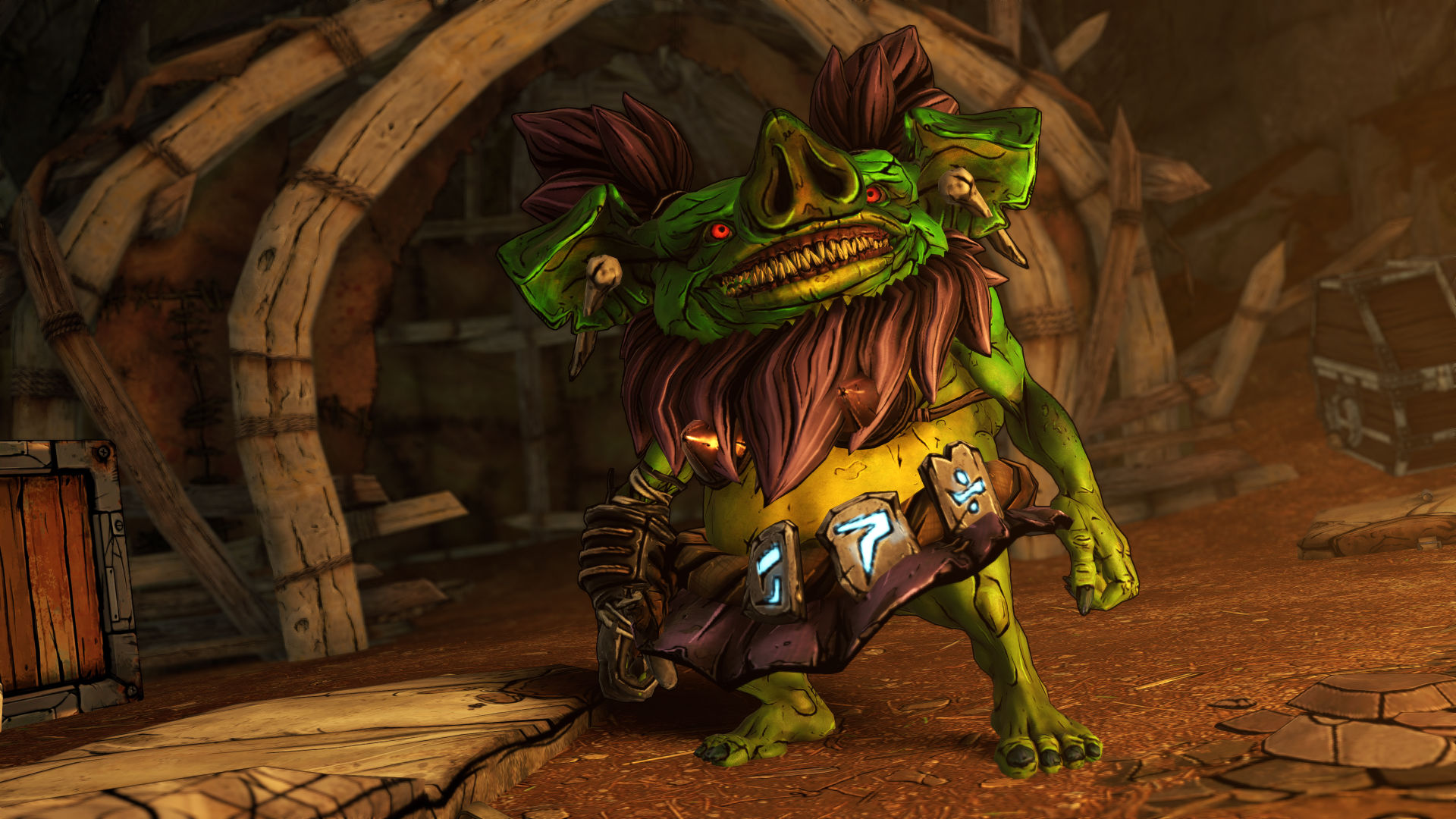 Borderlands is, at this point, well-established as a premier first-person RPG series (the G stands for gun). In Tiny Tina’s Wonderlands, Gearbox Software and 2K Games are rolling the dice that this departure from Pandora will be a critical hit. Tiny Tina’s favorite hobby, a tabletop game called Bunkers & Badasses (B&B), was first introduced in Tiny Tina’s Assault on Dragon Keep DLC for Borderlands 2, which was also recently re-released as a stand-alone adventure. In a sneak preview provided by 2K Games, I got to spend a few hours with Tiny Tina, who acted as my DM. I can say that longtime Borderlands fans should feel comfortable knowing that Gearbox isn’t reinventing gunfire, but whether it will be enough to lure back fans concerned about the series growing stale remains to be seen.

The series’s devotion to fitting into RPG norms has always been borderline, but Tiny Tina’s Wonderlands digs into Borderlands’ genre roots, at least aesthetically. Of course, the game is going for a Dungeons & Dragons motif, but not without a Borderlands touch. Instead of post-apocalyptic bandits and mutants, you get to deal with traditional RPG enemies like goblins, trolls, and dragons, but also more bizarre things like dogfish, which are essentially sharks with legs. The mix of modern-ish guns with a more fantasy environment creates a little bit of a steampunk atmosphere to a degree. Here and there, you find large D20 dice while exploring, which net you an item based on your roll (or an unwelcome live explosive if you roll a 1). You also get a full character sheet—as you’d see in D&D—with the traditional stats adapted for Borderlands.

Functionally, Tiny Tina’s Wonderlands doesn’t deviate far from the core of its parent series. You can’t make a game in this universe without tons of guns. Why would there be firearms in a medieval setting? The only limit in B&B is your imagination, so why not? Some are styled more like crossbows, but only if those crossbows were crossbred with sci-fi weaponry. In this case, a magic missile can be a literal, physical missile. However, Tiny Tina Wonderlands puts an emphasis on melee weapons, and you’ll find gobs of close-range weapons among the series’s trademark piles upon piles of loot.

Usually treated as an afterthought in first-person shooters, Tiny Tina’s Wonderlands makes an effort to incorporate melee more seriously into the mix. This game adds a special Ground Slam move that involves you leaping into the air before driving your sword or hammer into the ground like Thor. Overall, the refinements to the melee fighting system feels a lot like combat in The Elder Scrolls, though it benefits from the much smoother controls the Borderlands series has always boasted. I don’t care for the default placement of the melee button being pressing in the right stick, as it feels awkward to press when frantically trying to hack away at enemies. But moving it to another button feels odd, too, since the right stick is where the melee attack is typically in FPS games. It’ll be interesting to see if there’s a better solution for that when Tiny Tina’s Wonderlands launches.

The other addition to combat is spells. Like every other item in Tiny Tina Wonderlands, you’ll pick up spells from those same enemy drops and chests. There’s some diversity amongst spells, and despite essentially replacing grenades, they don’t behave particularly like them at all. Many spells are simple projectiles that have their own special attributes; others hit enemies within an area, usually centered on you, which may be especially helpful when playing solo. In traditional RPGs, spells typically are projectiles that let a magic-user attack from a distance and inflict status effects on enemies. In this case, since there’s still a heavy focus on guns, I’ll be interested to see how much variation Gearbox can come up with for magic for the final game.

Of the two classes available to me during the preview build, I preferred the Stabbomancer, a unique cross between mage and assassin that can alternatively utilize a special sneak skill that makes you invisible for a short time or a spinning blade spell. The other class, the Graveborn, was a little trickier to use, with an ability that lets you sacrifice your own hit points to damage the enemy, although I did appreciate the mini-Lich follower. There will be four more classes in the base game, with more classes likely to follow in potential DLC. So far, the game’s classes make for some fun, odd mashups of traditional RPG classes that provide variations within each character, as is typical for Borderlands.

The build I got my hands on set me in Mount Craw, an optional area in the new game. There, I encountered Jar, a goblin revolutionary who wanted to help her fellow people lose their chains. Thus, she needed my help putting the Goblins Tired of Force Oppression (the GTFO) on the map. After a few propaganda posters and a lot of shooting, we were able to let her people go. So, don’t worry, the series’ trademark wild, snarky, humorous streak is alive and kicking.

2K has assembled an incredible list of voice actors for Tiny Tina’s Wonderlands, and this preview build barely offered a taste of what we’re in for in the final game. From the brief snippets I heard, the talents of Andy Samberg as Valentine and Wanda Sykes as Frette are not going to waste, as the actors seem to have brought their A-game and mix in well with returning actors. With Will Arnett coming into the picture and whomever else is attached to this game, the audio alone is going to be a blast.

This hands-on has allowed me to sneak a small bite of what Tiny Tina’s Wonderlands is bringing to the table (I was promised Butt Stallion, but I haven’t seen her yet). There’s nothing here to make me believe this will be a radical shift in direction for the Borderlands series, but Gearbox can be counted on to deliver some fun anyway. We’ll check to see if they succeed on their persuasion roll when Tiny Tina’s Wonderlands releases on March 25th. Keep an eye on RPGFan for more coverage.