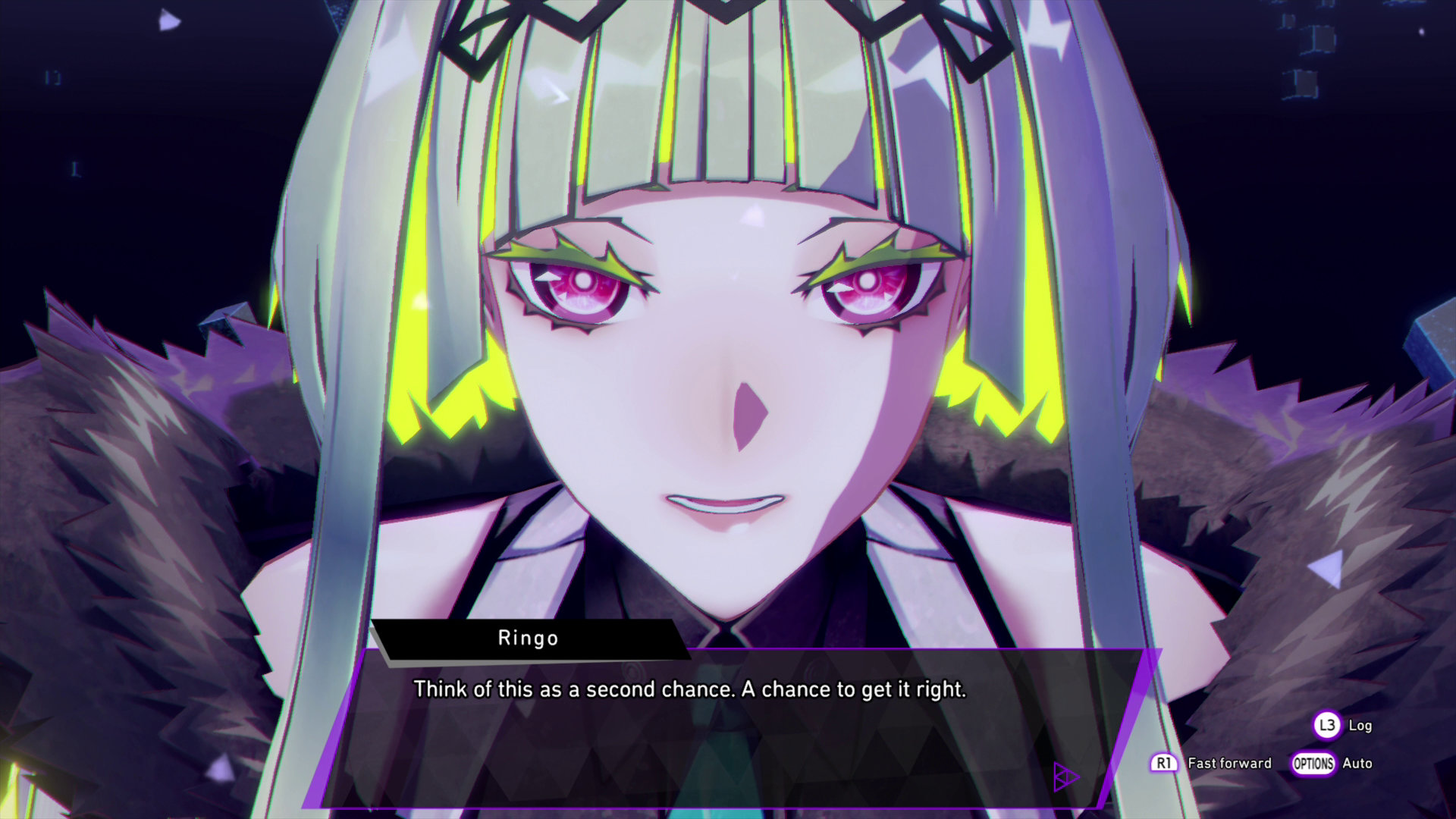 Two weeks ago, Atlus unveiled Soul Hackers 2, the surprise follow-up to a Shin Megami Tensei spinoff that originally came out a quarter century ago. We’ve been wanting to learn more about this upcoming title (due out August 26th on PlayStation, Xbox, and PC), so I’m absolutely ready to dive into these plot and character details provided by Atlus. Let’s go over them, shall we?

Players will step into the shoes of Ringo (voiced by Tomoyo Kurosawa), a newly-created artificial being that serves as an agent of Aion, a “sentient data collective born beyond the periphery of technology as an entity transcending human intelligence.” To stop the end of the world, we’ll be teaming up with the historically obscure Devil Summoners, who throughout the years have secretly solved paranormal incidents using powers gained from forging contracts with demons. Also returning from the original game are COMPs—customizable devices that enable demon summoning.

In the story, we’ll be using the “Soul Hack” ability to resurrect dead Devil Summoners. According to the press release, Ringo (and her partner Figue) are assigned “to locate and protect” two of these people in an effort to prevent the apocalypse only to find that they had been killed. At one of the murder scenes, a dying message was found, with only the mysterious word “Covenant” able to be deciphered. As for other critical details, here’s one intriguing tidbit:

Deepen your bond with your friends through interactions at the bar or in the hideout, and at times by retracing the past memories of summoners through vision quests.

Among the highlights of the first game were arguably the vision quests, where we, as the main character, relived the (usually dark) final moments of summoners that had passed away. It’s cool that these sequences will be returning in the sequel!

Ringo Leads an Eclectic Party of Individuals From Different Factions

The original game had such a colorful supporting cast, and Soul Hackers 2 looks like it will carry on that trend. Rather than demons, other summoners will serve as party mates this time around. There are apparently different groups of Devil Summoners to cooperate or clash with throughout the game, and our team will be composed of members of these factions. Find out more by reading the official descriptions for these characters below.

Figue (VA: Nanako Mori)
Another of Aion’s agents, like Ringo. Cool and thoughtful, she acts like an older sister to Ringo and keeps her in check, as Ringo tends to be more stubborn. She, too, displays interest and admiration for humans, and is friendly to them. She specializes in analyzing information, and supports the team from behind the scenes.

Arrow (VA: Kaito Ishikawa)
An agent of Yatagarasu, one of the Devil Summoner factions. He is one of the individuals whose death supposedly plays a part in triggering the apocalypse. He was seemingly murdered during an undercover investigation, and is resurrected with Ringo’s soul hacking. Normally gentle and quiet, but deep inside he is passionate and follows a strict moral code. Because of this, he often clashes with Milady.

Milady (VA: Ami Koshimizu)
An agent of the Phantom Society, another of the Devil Summoner factions. She’s killed by her own allies for reasons unknown. She is resurrected by Ringo’s soul hacking, and decides to work with her to find out why she was killed. Calm and collected, she operates with logical thinking and efficiency, sometimes leading her to make decisions that others may deem heartless. It seems this may have something to do with her past.

Saizo (VA: Masaya Matsukaze)
A freelance Devil Summoner. Although he’s murdered by a Phantom Society agent, he is resurrected with Ringo’s soul hacking. He decides to accompany Ringo and her team with a certain objective of his own in mind. A romantic at heart, he plays it cool in his own endearing way. Able to read the room, he often mediates and steps in whenever Arrow and Milady clash with one another.

We also got a trickle of new information on Soul Hackers 2‘s gameplay in and out of combat. It looks like SMT hallmarks such as demon fusion and weakness targeting are in, but with a twist. I’m curious to see how Sabbath and COMP enhancements work in practice.

Sabbath
When attacking demons, by unleashing precise moves like striking their weaknesses, you’re able to summon a mob of demon allies. The summoned allies will attack the enemies all at once. This attack is called a Sabbath, and utilizing this smartly will allow you to wipe out your foes.

The City and Realms
The story of Ringo and her team unfolds in a glitzy Japanese metropolis. Within this city of regular citizens, to whom demons are only myths and stories, there are cities that only Devil Summoners can enter called the Realms. Realms are said to be veiled from the world by a barrier imperceptible by regular humans. In this city, demons freely mingle with Devil Summoners, with facilities for summoners that allow demon fusions, COMP enhancements, and information gathering.

This overview has me champing at the bit to seeing more previews and footage of the game. I can’t say I had Soul Hackers 2 on my bingo card for 2022, but I’m glad that there are still announcements that can genuinely surprise me.

For more information on the game, you can visit the official website. It’ll be coming out for PlayStation 4 and 5, Xbox One and Series X|S, and PC on August 26th. Stay tuned to RPGFan for more news as it comes! Until next time, take a peek at several new screenshots, with even more in our Souls Hackers 2 game hub: