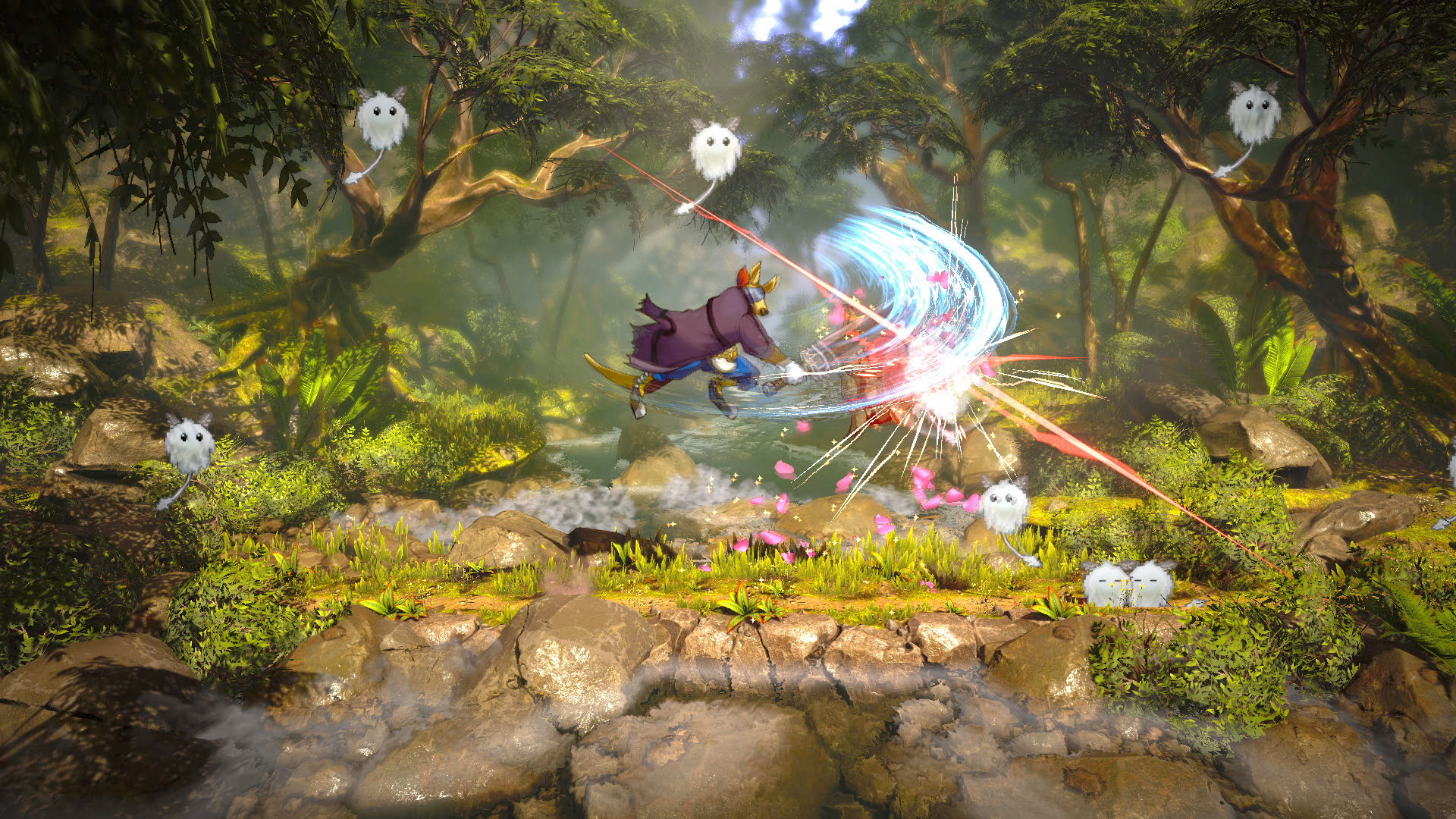 When Eiyuden Chronicle: Hundred Heroes was announced, Suikoden fans—counting me—were rightfully excited. Suikoden creator Yoshitaka Murayama was making a game that looks and feels and (almost certainly) plays like that series, particularly the first two. But this time in an HD-2D-esque style! While Eiyuden might not exactly be the Suikoden VI many of us were hoping for, it seems as good as we’ll get. Murayama and 505 Games pushed Hundred Heroes‘ release to 2023, but we have its prequel, Eiyuden Chronicle: Rising, to satiate us in the meantime.

Needless to say, when I got the chance to check out the beta build for Rising, I jumped at it. And after the three-hour run-time, I can tell you that even though Rising is more Actraiser than Suikoden, it has the makings of a solid introduction to the world of Eiyuden Chronicle.

Rising opens with CJ, a 16-year old adventurer who arrives in the town of New Naveah to search for treasure in the mines. It’s clear that something happened to this town; it’s in shambles, full of dilapidated buildings and wreckage. CJ wants to walk right by it all and hit up the mines, but there’s a catch: she needs a license to go exploring and doesn’t have enough money, so the mayor of New Naveah enlists CJ to help the town and gather stamps to gain access to the license, and consequently, the mines.

Remember when I said this game is a lot like Actraiser? I wasn’t kidding. The entire game is a side-scroller, even in towns. The basic gameplay loop is this: someone in the town needs something, you go off to gather what they need by running through dungeons and engaging in combat, which is very similar to a Metroidvania title. These materials range from salt to tree branches. Once you gather the items, you head back, and oftentimes, you build something in the town, like a shop or an inn, and you can use the additional materials to craft weapons, make food, or even create a fishing rod. Rinse, repeat.

So far, it seems like this loop is mostly going to work, largely because of your interactions with the characters. The story didn’t go too far down the rabbit hole during the beta, but it’s clear that there’s something else at work here, both within the mines and in the world at large. It’s incredibly satisfying to help people in New Naveah, upgrade your weapons, and get stronger as you go out to gather more materials. Maybe it’s just my Suikoden-driven love of town-building, but I felt great satisfaction as I built the town most of the way back up even in my brief time with the game. The fact that every character you meet clearly has different motivations, different personalities, and are all endearing in their own way is just a bonus.

Unfortunately, thus far, the combat doesn’t hold up quite as well, particularly in the very early going. As I noted before, the gathering and exploration segments play a lot like a Metroidvania, down to getting upgraded abilities (like double jump!), but that’s about all there is to it. There’s only one attack for each character in combat and one special ability each to start. You get more as time goes by, but the action feels awfully sluggish even after you get additional abilities. The fact that most of the bosses and enemies went down without much of a fight didn’t help matters either.

Further on in the beta, when I got an additional character, they did add something really cool: combo abilities. When you attack with one character, if you time it right, you can have the other character come out and deliver a powerful attack, followed by another. It made what otherwise felt like a relatively slow combat system feel fast, frenetic, and satisfying. It’s my hope that, by the time we get more abilities and more party members, Rising will do more of this.

It should also be noted that there are some solid accessibility options when it comes to combat as well. On top of the “Normal” mode that I mostly played with, there is an additional “Simple” mode that makes combat even easier by executing combo actions for you. For those who don’t like action games and just want to get the story before hopping into Hundred Heroes, this is a solid option.

I would be remiss if I didn’t mention that Rising is gorgeous, with static backgrounds as you traverse the town and dungeons—which are always busy, colorful, and detailed. The characters are purposefully a little pixelated, and while they stick out against the otherwise beautiful backgrounds, it does evoke the feel of the stunning pixel animation work in games like Suikoden II. While the look doesn’t quite reach Hundred Heroes’ levels, it’s still remarkable.

Overall, my impression of Eiyuden Chronicle: Rising is very positive. While I’d like to see a little more complexity from the combat, it looks like the town-building, the characters, and gathering materials will scratch my Suikoden itch just enough to make the wait for Hundred Heroes more palatable. And trust me, I need the help.