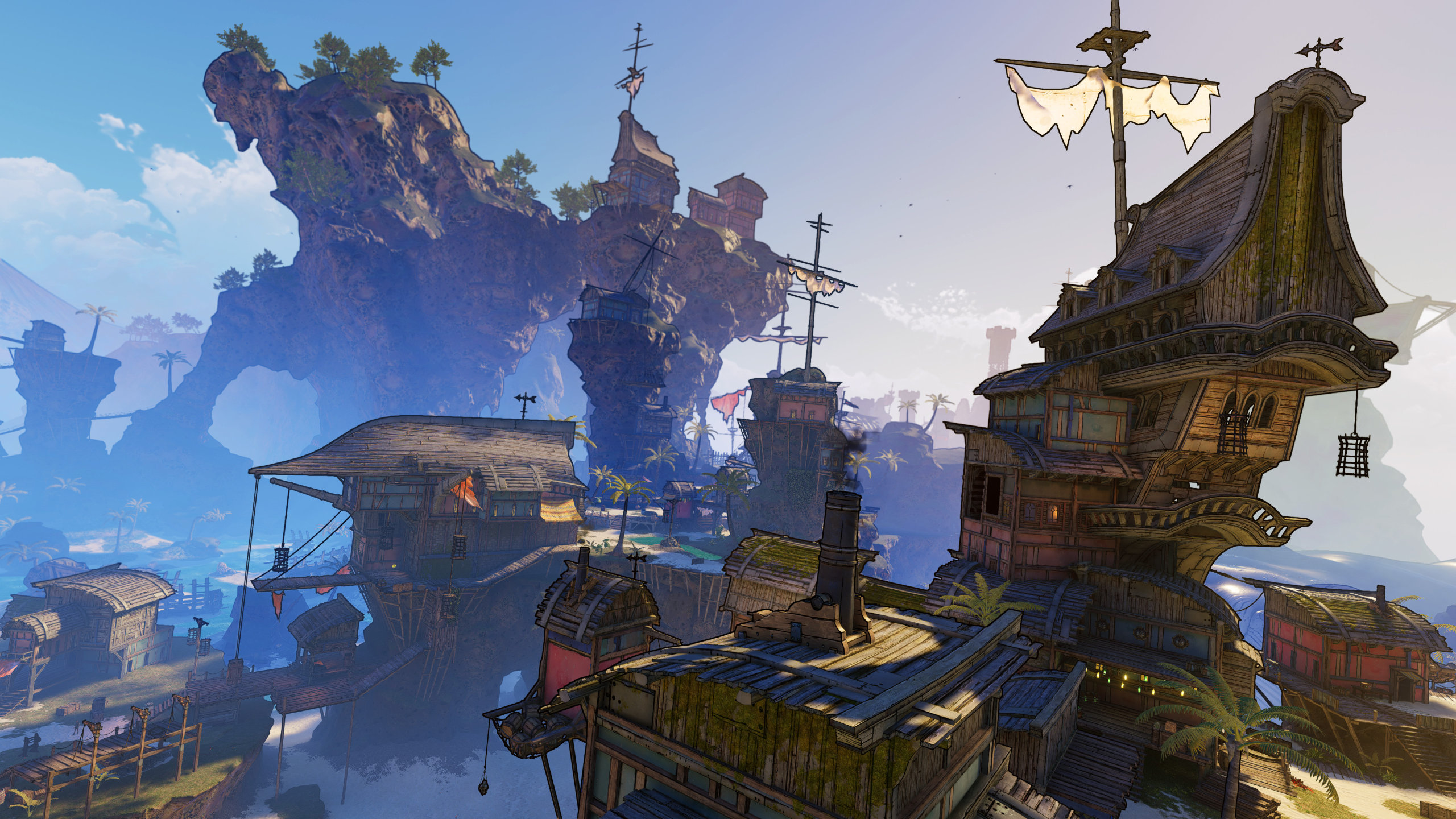 Tiny Tina’s Wonderlands is a standalone spinoff game in the beloved Borderlands series that combines the best of FPS (first-person shooter) games with RPGs (not the RPG rocket launcher). While you don’t need prior Borderlands experience to enjoy this game, a passing familiarity with the series and Tiny Tina’s character definitely helps. An appreciation for tabletop gaming also enhances the enjoyment of Tiny Tina’s Wonderlands. If you’re “past this line” regarding those requirements, you can certainly get on this FPS/RPG amusement park ride.

Tiny Tina is a delightfully eccentric young girl whose ebullient personality and love of explosives made her a darling in mainline Borderlands games. She even starred in her own Borderlands 2 add-on, “Tiny Tina’s Assault on Dragon Keep,” which is now available as its own standalone entity. Tiny Tina’s Wonderlands basically takes the ball from Assault on Dragon Keep and runs with it, creating a robust and intensely fun standalone game. The outline is that Tiny Tina and her friends Valentine (a rogue who thinks he’s Han Solo but is more Launchpad McQuack), Frette (Valentine’s droid companion), and “Newbie” (you) are in a bunker playing a tabletop game called Bunkers & Badasses.

Given that Tina is the Bunker Master (the equivalent of a Dungeon Master), the Bunkers & Badasses world she envisions is as wild as she is. The basic premise of Bunkers & Badasses is that the evil Dragon Lord has been resurrected to conquer the world, and it’s up to the realm’s queen (a supreme magical equine being named Butt Stallion) to assemble a party of adventurers to save the day. Due to this premise’s nature, the story is presented in a mostly stream-of-consciousness manner where things are not at all what they seem. Tiny Tina’s unpredictable nature makes for a wacky quest that can only be described as a confetti ball of madcap fun.

Tiny Tina takes her fun seriously, and the game follows suit. Unlike other Borderlands games where you play a preset character, Tiny Tina’s Wonderlands has you building your character from scratch as you would in a tabletop game. The character creation tool is seriously extensive, and it would take me a Ph.D. thesis’ worth of pages to expound on all it offers to truly make your character your own. I could have easily spent hours painstakingly creating my character. The most amusing part was choosing my character’s class, given their wacky names like “Stabbomancer” or “Spore Warden.” I chose to try the “Spellshot” class because they’re gun-toting mages, and my old character in Phantasy Star Online for Dreamcast was a pistol-packing mage.

As expected with a Borderlands game, Tiny Tina’s Wonderlands has style. The character and enemy designs have a lot of flair, and I like the shading in the artwork. The immersive environments look smooth as well and invite you to explore every hidden nook and cranny to find treasure and secrets. Because this game has an RPG-style setting, there is an overworld that resembles a classic JRPG map where Tina is not above throwing random encounters and other obstacles into a player’s path. I like how the overworld incorporates everyday household objects like bottlecaps and push pins in its design, similar to how tabletop players creatively use them in their worldbuilding.

The world and its inhabitants might look great in stills and animate fluidly in motion, but you can’t stand around enjoying the scenery too long. The action comes fast and furious. Hostile areas, be they longer dungeons or more compact random encounter fields, are run-and-gun FPS affairs. This is a Borderlands game, after all, so there are tons of guns to acquire to shoot anything that moves. Melee combat is also quite well done in Tiny Tina’s Wonderlands, and I often found it just as satisfying to hack away enemies with an axe as it was to pelt them with bullets. There is also plenty of flashy magic. Every character class plays differently, making it fun to try each to find the one that best fits your playing style. Similar to Final Fantasy V‘s Job System, it is possible to eventually earn a secondary class slot to create a hybrid character. Character building is part of what makes RPGs engaging, and Tiny Tina’s Wonderlands does this nicely.

Control is very smooth and intuitive, whether you prefer using a gamepad or the mouse and keyboard combo. The default button mapping for both suited me very well, though there are options to change it. The gameplay doesn’t necessarily reinvent the wheel, but its execution is on point and the game is delightful to play even when I’m getting my butt kicked. The game features three difficulty levels and various co-op play options because both FPS and tabletop games are more fun with friends.

In terms of sound, the voice acting is top-notch. That is to be expected with known talent like Ashly Burch, Wanda Sykes, and Andy Samberg (to name a few) playing Tina and the wacky denizens in her orbit. But that’s only scratching the surface. See, you can choose from a wide variety of excellent voices that all add life and personality to your player character in the character creation module. Hearing my character spout witty lines throughout the game was an absolute hoot. The music is well composed and gets the job done in terms of building atmosphere, but I will not be going out to buy the soundtrack.

My impression thus far is that Tiny Tina’s Wonderlands basically takes everything that is great about Borderlands and puts it in a nutball fantasy setting that could only be concocted from the vivid imagination of Tiny Tina herself. It looks, feels, sounds, and plays as you would expect a Borderlands game to, which is to say pretty darn good. The added bonuses of good melee combat and an extensive character creation module are lovely cherries on top. Tiny Tina’s Wonderlands is pure fun so far and promises a plethora of content, so things can only get wilder from here.