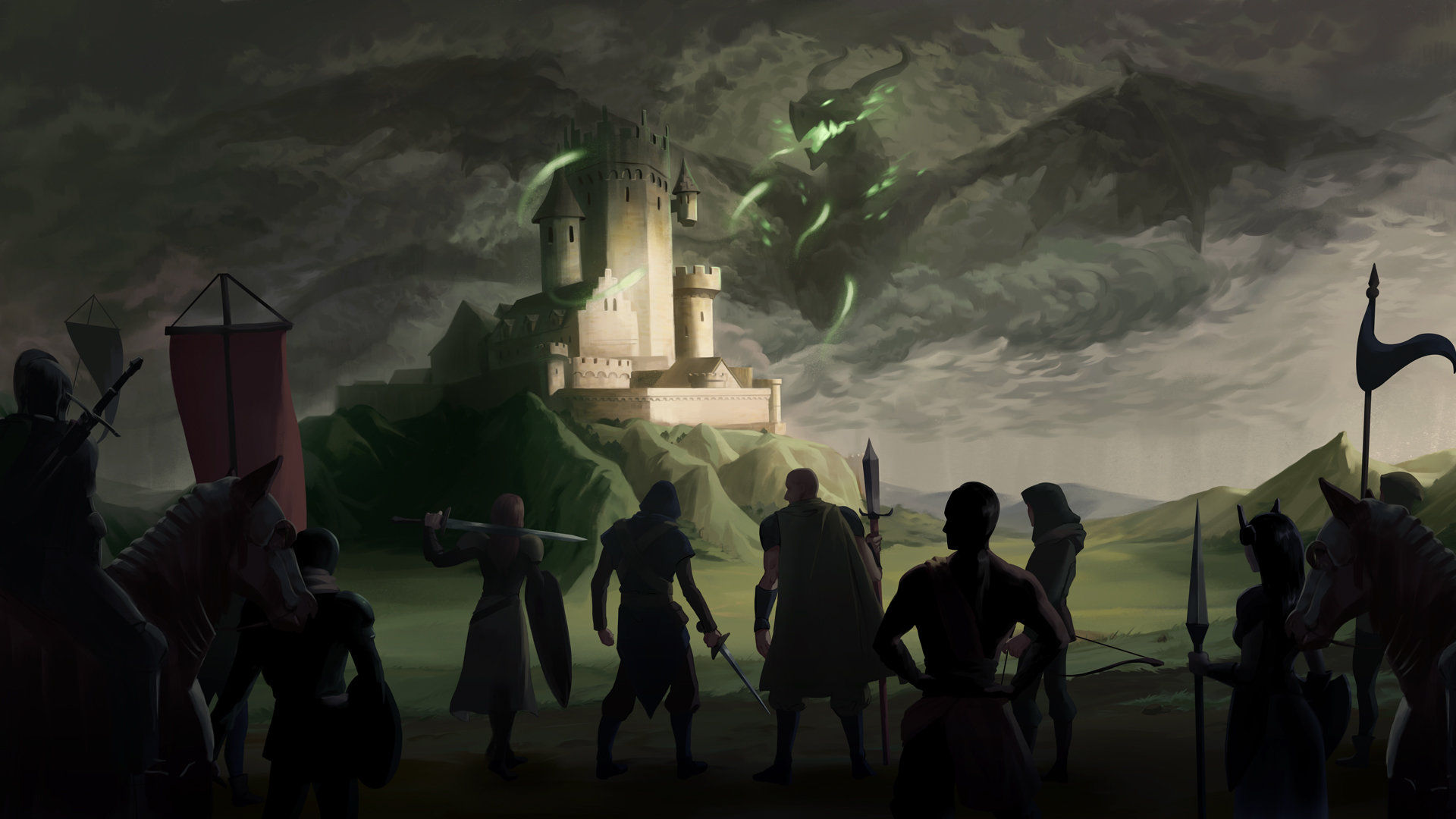 If you’ve ever fancied being the leader of your very own mercenary group, then perhaps The Iron Oath is already on your radar. Having recently entered Early Access on Steam, developer Curious Panda Games’ second release is already off to a great start; while some of our readers may have been burned in the past by Early Access games that never reached full release, The Iron Oath’s team are proactive with both updates and communication. If you have ambitions of dungeon-delving alongside your personal band of merry mercs, read on for our impressions of the game in its current state.

Conceptually, The Iron Oath obviously draws inspiration from other games but very much has its own identity through its visuals and world-building. For example, you’ll feel right at home with its mercenary management and dungeon exploration if you’ve played Darkest Dungeon, yet the execution of its influences is original. The Iron Oath utilises many different systems that operate in tandem, and all of them need to be closely monitored by the player to maximise the chance of success.

After naming our mercenary group, assigning it an emblem, naming our hero, and choosing their pronouns (yay!), the game opens with a brief tutorial stage. While clearly designed to introduce the player to The Iron Oath’s combat and exploration mechanics, I appreciated that this opening stage did not hold back more “difficult” features. I played the tutorial twice to test different outcomes; I lost several of my mercenaries during my first playthrough, so I played it a second time to see if it was possible to clear the tutorial with them still alive. I’ve seen some games with “permadeath” force the mechanic on you early on to establish how it works, but The Iron Oath does indeed allow you to keep your initial team if you play smart and know what you’re doing.

Story-wise, The Iron Oath seems to borrow a fair few ideas from Dragon Age: Origins. The world of Caelum is beset by a “Scourge” on a cyclical basis, during which the realm faces assaults by “Void Spawn” and dragons. I can’t help but notice the similarities between Dragon Age: Origin’s “Blights,” “Darkspawn,” and… dragons, but The Iron Oath runs with their concept and introduces a whole calendar system. Caelum will dynamically change as time progresses: new questlines will appear, Scourges need to be dealt with, and your mercenary group will leave its name in the annals of history based on the player’s decisions. This all sounds very exciting, and despite our current Early Access incarnation lacking some planned features, Curious Panda Games’ roadmap leaves me confident in their implementation further down the line.

Combat appears simple at first glance, presenting enemies and party members on a hex-based grid. As expected, however, many strategic elements are built into the turn-based framework to keep you on your toes. Alongside your attacks’ range of effect, the AP required to use skills, and their limited uses per run, you will also need to weigh up environmental factors such as line-of-sight, pitfalls, and the direction your foe is facing. The turn order is displayed at the top of the UI, and actions such as “Pass” and abilities with cast times allow you some options to manipulate the flow of combat. It all works together very nicely, and while RNG is quite heavily weighted with your chance to hit enemies, factors such as damage dealt, flanking attacks, status effects, and skills being a guaranteed hit add ways to command certainty. The controls are intuitive and snappy, keeping things moving without adding extra stress to the inevitable tension of battle.

Whether you succeed or fail in your adventures (from combat to random skill-check events and more) depends largely on your preparation. The Iron Oath is a game that rewards the player’s forethought and careful planning; as I said earlier, you can plough through on a wing and a prayer, or you can go a bit slower while taking full advantage of the game’s few mercies. The tutorial alone is evidence of this, but as you advance to the main portion of the game and have more features to balance, the more you’ll have to monitor your mercenaries’ condition.

Injuries sustained in combat will need to be treated at an Infirmary, lest they worsen and cause permanent penalties to your characters or even lead to their death. You also want to keep fatigue at bay by regularly resting at an Inn. Managing your finances is perhaps the most crucial matter when juggling these systems. Aside from your group’s health, each member needs their salary annually (just like real life!) as well as equipment and items. It’s satisfyingly in-depth, giving a great sense of achievement after a smooth mission and a natural sense of “choice and consequence” to The Iron Oath’s general gameplay loop.

Graphically, The Iron Oath presents itself in beautifully stylised pixel art. I sometimes feel that “high resolution” 2D assets in games can come across as flat and lifeless. I don’t know if it’s the nostalgia talking, but there’s something about visible pixels that just makes more sense to me. While the environments are also rendered in just two dimensions, Curious Panda Games have implemented some depth of field effects during specific combat sequences, which elevates the animations’ impact.

Speaking of animations: they are beautiful. The motions are frame-by-frame, which feels somewhat less common in this era of achieving movement through manipulating 2D parts rather than traditional animation techniques. There’s clearly a lot of love put into the work. A stand-out for me is the first time you see a dragon on the overworld map. Each flap of its wings and its elegant movement arc are a display of true craftsmanship. I’d have liked a little more diversity in the character designs — classes are gender-locked and customisation is limited to palette swaps — but everything looks great regardless. I quite like that each class has their own recognisable identity on the battlefield; the character portraits each offer more variation than the combat sprites, which helps differentiate your party members. Similarly, the music throughout The Iron Oath definitely sets the tone for each area, and while no specific tracks are stuck in my head after a play session, none of them made me turn off the volume either.

Overall, my experience with The Iron Oath was very enjoyable. I’m glad I initially replayed the tutorial level. While I’m familiar with similar games in the genre, The Iron Oath wants to stand apart from them and establish its own gameplay flow. It’s a very polished Early Access game, and that extends to every facet of its development. There’s even an in-game feedback function, allowing players to report any issues on the fly. The developers have already pushed out four updates at time of writing: two smaller updates and two “regular” updates. The patch notes reflect the enthusiasm driving the game to its completion, with changes including bugfixes, balance adjustments, client optimisations, and more.

For further reading, we also recently interviewed the developers of The Iron Oath, and their passion for their game came across in every detail they gave us. I think we have a real treat to look forward to with the finished product, and I wholeheartedly wish Curious Panda Games every success with The Iron Oath’s continued development.

DISCLAIMER: This article is based on a free copy of a game/album provided to RPGFan by the publisher or PR firm. This relationship in no way influenced the author’s opinion or score (if applicable). Learn more on our ethics & policies page.