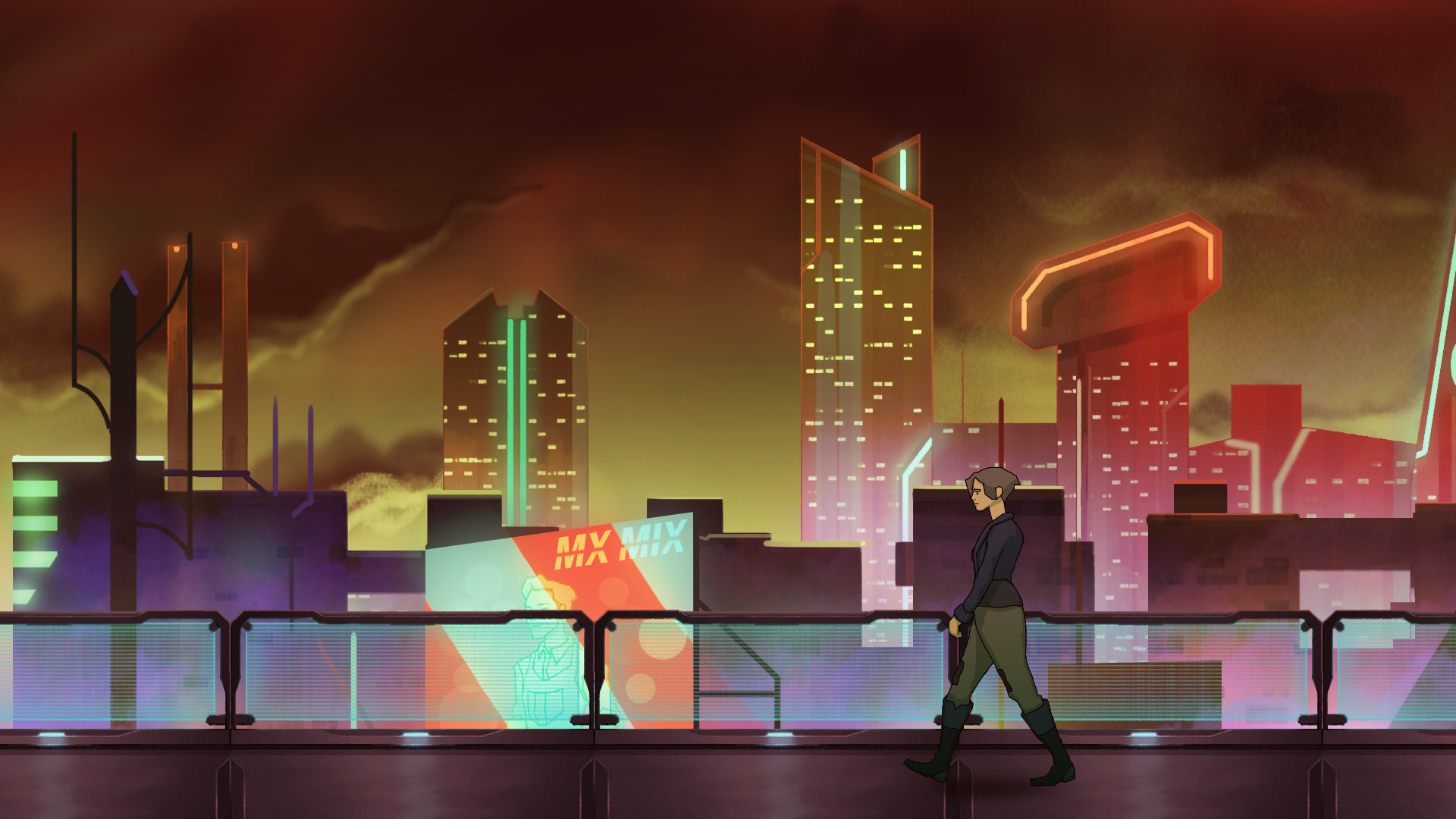 Aficionados of point-and-click graphic adventures should most certainly be familiar with developer Wadjet Eye‘s work. These genre specialists have been crafting high-quality retro-style graphic adventures for over a decade and now have a new time traveling adventure called Old Skies on the horizon. A demo is available during Steam Next Fest this week (June 13 – June 20), and here are impressions from my time with it.

Old Skies showcases the lushest production values I’ve seen yet in a Wadjet Eye game. The visuals may not look flashy in still screenshots, but the smooth backgrounds and sprites look amazing on my computer screen when playing. The location backdrops are beautifully colored and often quite detailed with subtle animations; they lend the appropriate atmosphere to the varied settings. The sprite animations are quite slick, especially the more subtle animations like facial movements when a character is speaking. Characteristic of the genre, the devil is in the details and, in short, Old Skies looks gorgeous from any angle under the scrutinizing eye of genre veterans.

Players take on the role of Fia, a field agent for a company called ChronoZen that offers a desirable and costly service to its discerning clientele. For a price, ChronoZen will let you sightsee in the past with Fia acting as your guide. Everyone has their own reasons for utilizing ChronoZen’s services, from simple curiosity to wanting to resolve unfinished business. Fia guides several different travelers throughout the full game, but this demo focuses on her first in-game assignment.

Despite being the player’s first job with Fia, it is clearly not her first rodeo. The dialogue and voice acting beautifully capture Fia’s juxtaposition of weariness from having seen it all with needing to be appropriately sensitive to her clients, even if they seem to have more money than common sense. This job is quite taxing, as Fia has to ensure clients have a satisfying experience while also keeping them from breaking the complex, fragile, and consequential rules of time travel.

Speaking of voice acting, what I heard from all the characters thus far in the demo was excellent. Old Skies is said to have the most extensive voice acting of any Wadjet Eye game to date, and I hope other characters’ performances are on par with the few I heard here. Additionally, voice acting is merely one aspect of Old Skies‘ excellent sound design. The music features complex yet atmospheric compositions that are engaging to listen to while patiently perusing puzzles yet never get in the way of the dialogue. The sound effects are also beautifully done and made the settings that much more immersive.

Old Skies plays like a graphic adventure should with an intuitive interface featuring crisp icons and legible fonts. Fia explores her surroundings, interacts with people, collects information, gathers sundry items, and utilizes items and information in myriad ways to solve logic puzzles. The puzzles so far are smoothly integrated into the woodwork, and never once did I feel pulled out of the narrative to do a bunch of convoluted or semi-arbitrary “adventure game-y” tasks. What I saw of Old Skies in this demo is driven by story and characters rather than puzzle solving, so the balance experienced here suited me just fine. Do note that sometimes a single wrong move can lead to Fia’s death, but the power of time travel allows a short rewind so she can try again, similar to what Subaru Natsuki does in the Re: ZERO series.

One of the coolest parts about the Old Skies demo is the optional pop-up commentary tracks where the developers talk about the creative process throughout the demo. There are also opportunities to hear voice-acting bloopers and outtakes. It is abundantly clear to me that every last detail in Old Skies‘ design and execution has been thoroughly thought out. And since it came up in the commentary track, yes, I think the exposition regarding Fia’s use of a subvocalizer device to discreetly communicate with her supervisor Nozzo (who’s stationed at ChronoZen Headquarters in the future) while she’s on assignment was expertly handled. I would recommend playing the demo twice: once with and once without the commentary. The commentary insights heightened my appreciation for the meticulous care put into the game, but sometimes interrupted my flow as I was playing.

Countless demos are competing for attention during Steam Next Fest, but if you enjoy point-and-click graphic adventures in any way, shape, or form, you should definitely check out Wadjet Eye’s Old Skies demo. With its slick graphics, fantastic sound design, well-integrated puzzles, a plot I became invested in, characters with personality, and thoughtful game design, I couldn’t ask for anything more. Old Skies does not have a release date yet and may not even come out this year, but it’s 100% going on my Steam wishlist. If you want something to tide you over until then, Wadjet Eye has plenty of other games, such as the highly recommended Unavowed.