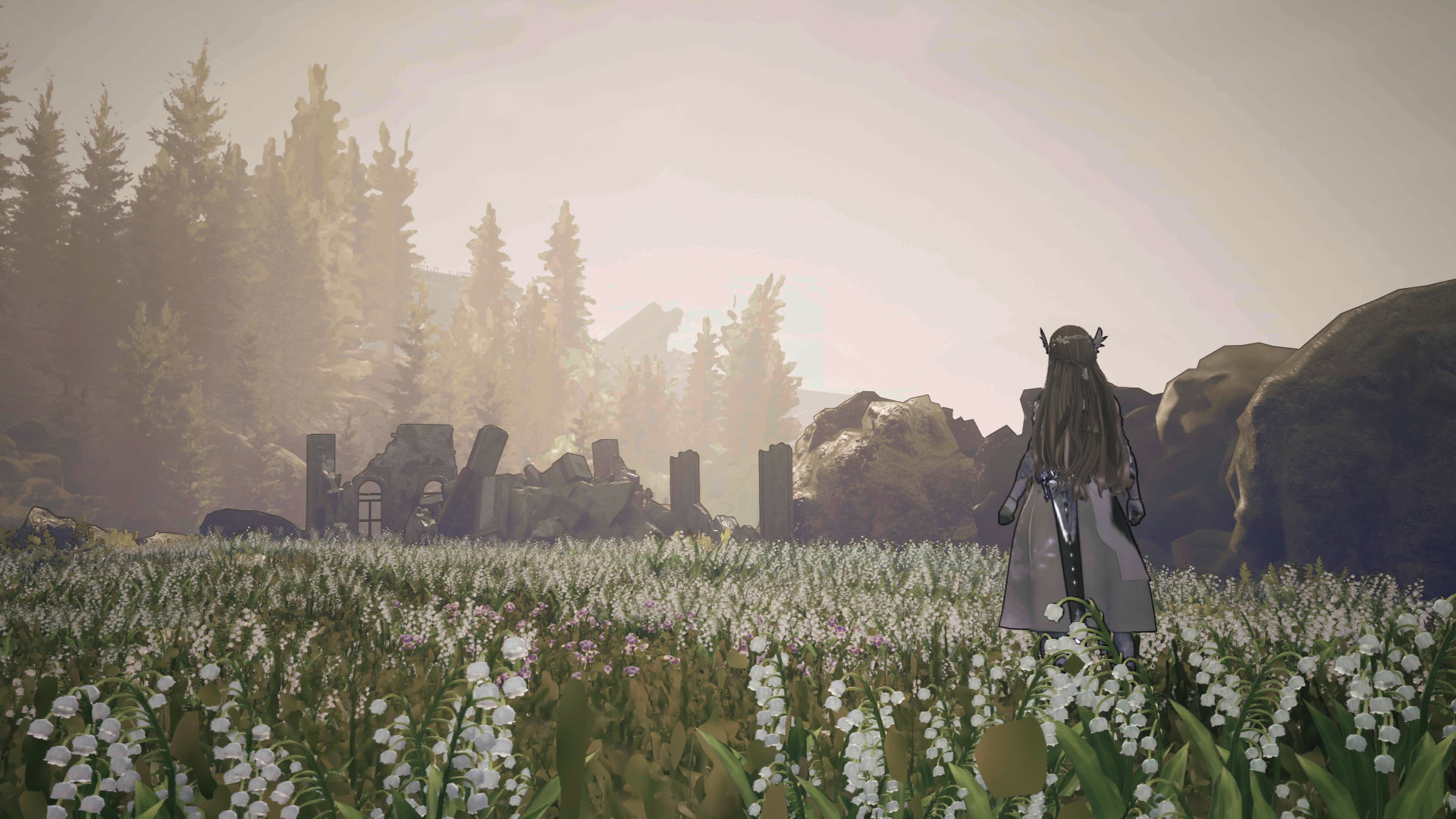 On January 21st, 2022, I stated: “I’m excited about 2022, and like a fool, I’ll continue to try to will Valkyrie Profile 3 into existence.” in our Games of the Year 2021 Editor’s Awards. On March 9th, 2022, Valkyrie Elysium was announced at Sony’s State of Play showcase. Imagine my surprise when I learned that black magic actually does work. However, something seems to have gotten lost in translation, as Valkyrie Elysium clearly was not what I asked for. Valkyrie Elysium‘s initial trailer was a bit rough, and I’d be lying if I said I wasn’t concerned with how the game looked at first (and the absence of tri-Ace.) Since the reveal, the new trailers have been a far better showing of the game, revealing more of the battle system, world, and mechanics. Until now, I’ve carried on with cautious optimism mixed with a healthy dose of hope. Thanks to Square Enix, we’ve managed to get our hands on the PS5 demo a bit early, and I’m happy to say it struck down many of my concerns.

The demo for Valkyrie Elysium covers the first chapter, which is surprisingly lengthy. After the brief introduction and history of the world, players follow right into the tutorial to get a feel for the game. Immediately, I noticed that Valkyrie’s movement was a bit heavier than I expected. Early trailers made her movements look a bit light and flighty, yet each swing of the sword in the demo felt hefty and moderate. Not too fast, not too slow, and packing all the punch it needs. As an action RPG, battles in Valkyrie Elysium happen in real time. Players utilize the square button to perform strings of light attacks while adding heavier attacks with triangle. At first blush, the attacks seem straightforward, with basic sequences of square three or four times followed by triangle. As players level up weapons and develop Valkyrie’s abilities, the repertoire quickly grows and shifts the game into a character action game within hours.

The first upgrade players receive from leveling the starter sword is an off-the-ground attack performed by jumping and pressing square. Whether an enemy is lying on the ground or already airborne, this will juggle them skyward and allow for follow-up attacks. At the end, a solid blow will send them back to the ground and leave an opening for players to punish their foe. Leveling weapons further unlocks more abilities, and as the game progresses, more weapon types become available. Luckily, players can equip two weapons and swap between them with a quick tap of up or right on the D-pad. Additionally, there is a skill tree for attack, defense, and support. Each tree has notable abilities: finishing moves, double jumps, double dodges, timed counters, and more.

In Valkyrie Profile, Lenneth’s special ability allowed her to throw ice crystals at foes and freeze them in their place. This allowed the player to get the jump on enemies, but Lenneth could also use it for traversal by forming ice crystals on walls and stacking broken chunks of ice atop one another to create platforms. In Valkyrie Profile 2: Silmeria, Alicia (and Silmeria)’s ability allowed her to shoot photons that froze enemies solid, to use them as platforms, and to swap places with them with an additional shot. In Valkyrie Elysium, the Valkyrie’s special ability — Soul Chain — is essentially a grappling hook that allows her to zip around the environment and towards enemies in battle.

The Soul Chain ensures Valkyrie can reach ledges high up, but one of its more exciting uses is in battle. A simple press of the L2 sends out a crystal towards the targeted enemy, interrupts smaller enemies’ actions, and drags Valkyrie towards them at high velocity. This ability is great for zipping up towards flying opponents and large bosses with multiple targets. It’s also useful for creating breathing room when ambushed by groups. The Soul Chain acts like Dante’s signature Stinger attack from Devil May Cry. While it doesn’t do damage, it can knock smaller enemies out of their animation and provide a superb opening to deal damage.

Divine Arts are spells and abilities that can turn the tide of battle. Players start with the ever-familiar Lightning Bolt and eventually come across Fire Lance and Heal. While familiar spells are appreciated, there are a few new and rather interesting spells and abilities found in the demo. The two of note in the demo are Grave Edge: a holy dash through the enemy, and Conversion: a spell that pulls foes towards the player. When mixed with the Soul Chain and in-depth combo system, battles can get fairly chaotic. Divine Arts are, however, quite limited when used. Each use will drain one of the magic symbols under the Valkyrie’s health bar, though physically attacking the enemy quickly replenishes the spent resources. In a way, it feels quite similar to knocking purple gems out of enemies to reduce the party’s Charge Time (cooldown after using a spell.)

Einherjar act slightly differently in Valkyrie Elysium, but they’re still the same in spirit. Einherjar are mapped to R1 + a face button, allowing for a total of four to be available at any given time. However, only two can be on the battlefield simultaneously. When summoned, Einherjar attack foes relentlessly. Each Einherjar is equipped with an element, so players should keep track and exploit these elemental affinities. While two Einherjar are out on the field, Valkyrie also gets an elemental buff to her attacks based on the Einherjar selected. Thankfully, swapping elements is as simple as pressing the Einherjar’s button again. These elements combine to create an interesting spin on the Valkyrie games’ battle system. While we may not be timing button presses to juggle enemies and knock magic crystals out of them as a full party, Valkyrie alone can do the deed while her Einherjar may set up launches and break guards.

On the subject of magic crystals flying out of enemies, my time with the demo has shown that Valkyrie Elysium is trying to be as faithful to the series as possible while still trying new things. Spell names and Einherjar are one thing, but the developers have ensured that the ever-familiar hit counter is present and looks exactly how it should. While the ability to use Soul Crush/Purify Weird Soul moves was absent from the demo, the presence of the beloved special attack Nibelung Valesti in the most recent trailer has shown that Valkyrie Elysium is not just a knock-off wielding the name.

The music, so far, is very much in that Motoi Sakuraba style that we know and love. Naturally, all the bells, chimes, strings, and chants create an oppressive and holy atmosphere when roaming the castle in Asgard. Upon Midgard, the music is a little more subdued and peaceful until combat begins. Once the blades are drawn, there is a rather impressive shift into the battle music that carries the same melody with louder and more aggressive drums, strings, flutes, and chants. The way the musical theme adapts to the situation ensures the atmosphere is thematically consistent.

As the demo only covers the first chapter, we only get a brief look at the world on the trek to Be’elze Castle. While the original Valkyrie Profile games are quite gorgeous, Valkyrie Elysium so far lacks the vivid flair and color schemes found throughout the prior games. The art style is a little more subdued at first look, but I did notice that the bright and shimmering particle effects from magic and abilities stood out against the lightly murky backdrop. The world design is also impressive with lots of verticality, which evokes the series’ platforming roots. Maps are large and offer numerous paths to explore, and thanks to the abundance of item chests and miniature stories told via Hollow Blossoms, exploration is highly encouraged and rewarded.

As mentioned at the beginning, the demo for Valkyrie Elysium is rather lengthy. The first chapter took me roughly an hour to finish, and the two sidequests available to me were relatively brief at ten to fifteen minutes each. With the tutorial, general exploration, Hollow Blossom collection, and testing out the new weapon I received after the boss fight, I squeezed about two and a half hours from the demo. Throughout my time, I enjoyed what I played and have become more optimistic toward the final release. The demo isn’t without its janky moments: using finishing moves too close to a wall can create some clipping issues, and the camera may decide to rebel against the players when a boss whips around. These issues were relatively minor in my experience, though they’re certainly noticeable blemishes.

Valkyrie Profile is by far my favorite series, so my expectations for the final release are rather high. That said, every showing since the reveal has been an improvement, and the demo has instilled more faith in me. Stay tuned for our full review of Valkyrie Elysium, which launches on September 29th for the PlayStation 4 and PlayStation 5, and on November 11th for PC.