Posted by Giancarlo Vazquez on January 7, 2021 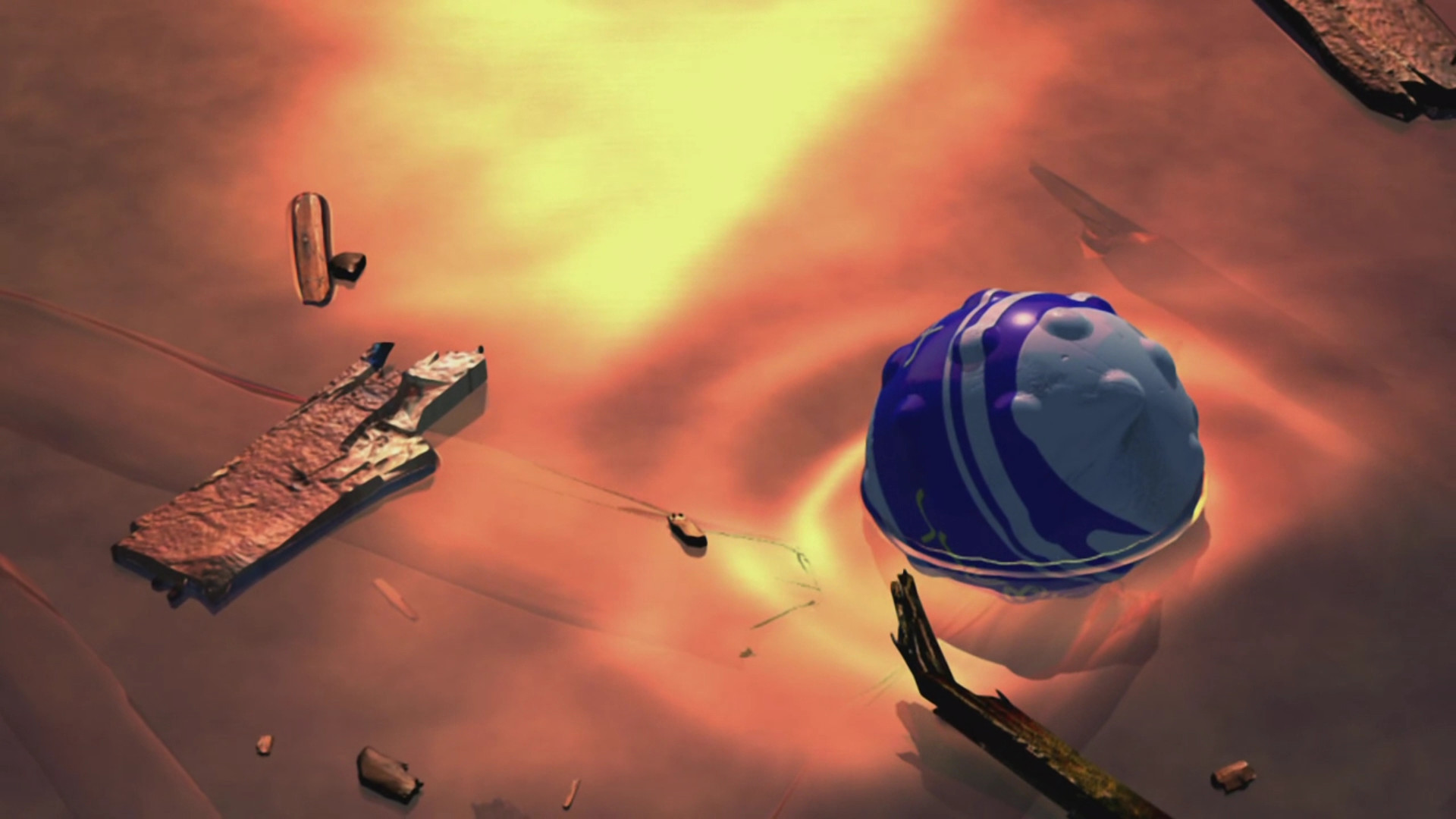 Blitzball. A smile has cracked across someone’s face, and only because the word is written in isolation. Blitzball. An annoyed player resets their PlayStation, determined to beat the Luca Goers in the finals. Blitzball. A silly laugh is shared between two star-crossed lovers, neither aware of truths above their knowledge. Blitzball. A small fishing town is destroyed by a force beyond comprehension. An oddly-shaped ball floats along in the wreckage. Blitzball. A recreational sport is the last surviving pillar of civilization and is co-opted as a religious symbol. Blitzball. The last beacon of hope. The timeless pastime. The single escape. Blitzball, Final Fantasy X’s unsung hero.

The world of Spira in Final Fantasy X is a jarring change if you’re familiar with RPGs, unless it was the first RPG you ever played. In one of its characters’ own words, “Spira is obsessed with death.” This was a lie. Spira is obsessed with Blitzball. But, what is Blitzball if not the death of civilization itself? Allow me to explain: Sports fanaticism isn’t too far from religious zealotry. It’s not entirely wrong to say between past and present, only two things are permanent in Final Fantasy X’s world: Blitzball and Sin. And when your options are death or water polo? You dive right in!

Turning a sport (Blitzball) into a pillar of community isn’t unique to Spira. Sports can connect people across borders, languages, cultures…and in Tidus’s case: time. The protagonist of Final Fantasy X is whisked away from his hometown of Zanarkand by Sin, a destructive force of unknown origin, and after a rather harrowing ordeal involving several giant fish, is found by a group of people speaking a language he doesn’t understand. Tidus struggles to communicate with them to no avail and is soon attacked by Sin once again. Thrown out on the shores of Besaid Island, he realizes he’s a fish in a foreign sea, but the presence of a Blitzball, something familiar and common between him and the Besaid Blitzball players who find him, immediately sets him at ease. When Tidus passes the Blitzball back by performing an impressive aerial maneuver, it isn’t just an opportunity to characterize our protagonist as a show-off; this gesture of skill forms an instant connection between him and Wakka, the Blitzball player who serves as Tidus’s confidant early in Final Fantasy X’s first act. Wakka asks him to play for their team, the Aurochs, in the upcoming Blitzball tournament, and this request is how Tidus’s story begins.

The civilizations of Spira parallel real-world nations, with the Spira Cup mirroring futbol’s World Cup tournament. Teams from all over Spira come together to compete for the championship, and many see the tournament as a ceremonial event, making pilgrimages to Spira’s temples and praying for victory. The promise of playing for the Aurochs in the cup keeps Tidus in the presence of others. A lost soul in a world he doesn’t recognize, he’s able to tether himself to Yuna and her entourage of guardians thanks to…well, Blitzball! It’s why Auron, bodyguard to Yuna’s father and Tidus’s self-appointed babysitter, re-enters the narrative the moment the tournament is over. Tidus needs someone or something else to give purpose to his attachment to this group he barely knows. Blitzball keeps the people of Spira tethered to one another in the same way: rooting for their teams, mingling in bars and stadiums, and sporting (HAH!) friendly rivalries to best the other at the next game.

But the traditions of Blitzball go beyond teamwork and bonding. The sport is synonymous with desperation and survival. Our introduction to Blitzball is also our introduction to Sin and the destruction of Zanarkand when Sin tears the place apart in the middle of a Blitzball match. Later on, Sin lays the island town of Kilika to waste, the final shot of the scene a mass of wreckage floating in the water as a lone Blitzball drifts past. When Tidus suggests the group stay behind to help, Wakka insists playing in the Cup is more important — a sentiment shared by Kilika’s own Blitzball team, who postpone reconstruction until after the tournament is held. The Blitzball drifting past the splintered wood and collapsed infrastructure is a perfect visual metaphor for how the people of Spira deal with Sin: they don’t.

With death constantly on the horizon, they seek shelter in the stadiums, in the promise of the next game, in an organized place with structure and an order to things. Over the years, they’ve taken the friendly gesture for wishing someone good luck in a match and co-opted it as religious prayer. Blitzball takes precedence over other facets of life and crisis because it allows them to escape from Sin. Tidus uses Blitzball to escape from his own internal conflicts. He can avoid acknowledging his fears of Zanarkand’s destruction and the existential dread of never being able to return. Even for the player, Blitzball provides an escape from the escalating story as an exciting (and misunderstood) mini-game with extensive depth. Final Fantasy X revolves around death, acceptance thereof, and the difficulties found in doing so. Spira turns a blind eye to grief — and to Sin — by distracting themselves with Blitzball. The sport is worship and the stadium is the temple. Blitzball is prayer. Blitzball is salvation. Blitzball…is church.

It’s an integral part of Final Fantasy X’s complicated relationship with the topic of faith, one its sequel explores further by tackling power structures and political vacuums. Sin is without a doubt presented as a destructive entity, but one of man’s own creation. Faith is viewed as a positive factor towards togetherness and mutual survival but comes with warnings attached. Instead of seeking ways to prevent Sin from ever returning, the people of Spira have resigned themselves to delaying its wrath. Surrogate priests known as Summoners make a pilgrimage of their own, praying to the spirits of the dead, the Fayth, to amass the power to silence Sin for an undetermined amount of time at the cost of their lives. Despite their efforts, Sin always returns, and always sooner than before. It is a cyclical process Spira continues to preach, perpetuated by the high-ranking clergy who enjoy the power they hold in the current hierarchy. Believe it or not, Blitzball foreshadows many of Final Fantasy X’s thematic points as well as representing the best and worst humanity has to offer.

The ball floating amid Kilika’s wreckage is a distraction from the horrors out of frame. It is the way things are in Spira: Sin destroys us, we pretend everything’s fine, we pray to Yevon, we play Blitzball. When Sin’s true identity is revealed to be none other than Tidus’s father, the star Blitzball player Jecht, the destruction of the stadium is all the more potent; When Jecht destroys the Blitzball stadium, he’s destroying the self-casted illusion Spira has placed on itself, literally dismantling a place of worship to expose them to the reality of Sin. The sport itself is contradictory to the teachings of Yevon: Machina are forbidden unless they are church-approved and help keep the people of Spira in their perpetual nightmare against Sin.

Yet, Blitzball is also the final bastion of humanity. It’s a gentle prayer to soothe the souls of the living as they send the souls of the dead to rest. Its worldwide attraction keeps the world of Spira unified against Sin itself. Its immunity to time allows our protagonist to bond with others and go on to stop Sin. Without Blitzball, Spira would have been worse for wear. Setting the penultimate battle of Final Fantasy X between two Blitzball players, one who represents Sin and another representing the Fayth, and having them clash inside of a destroyed stadium is not a coincidence — or if it is, an extensive and unlikely one. It’s the everlasting battle between humanity’s failings and their drive to overcome them. A tug-of-war between the best and worst it has to offer. And when in the hands of talented players?