We Saved the World… Now What? Exploring Final Fantasy X-2’s Theme of Rebuilding 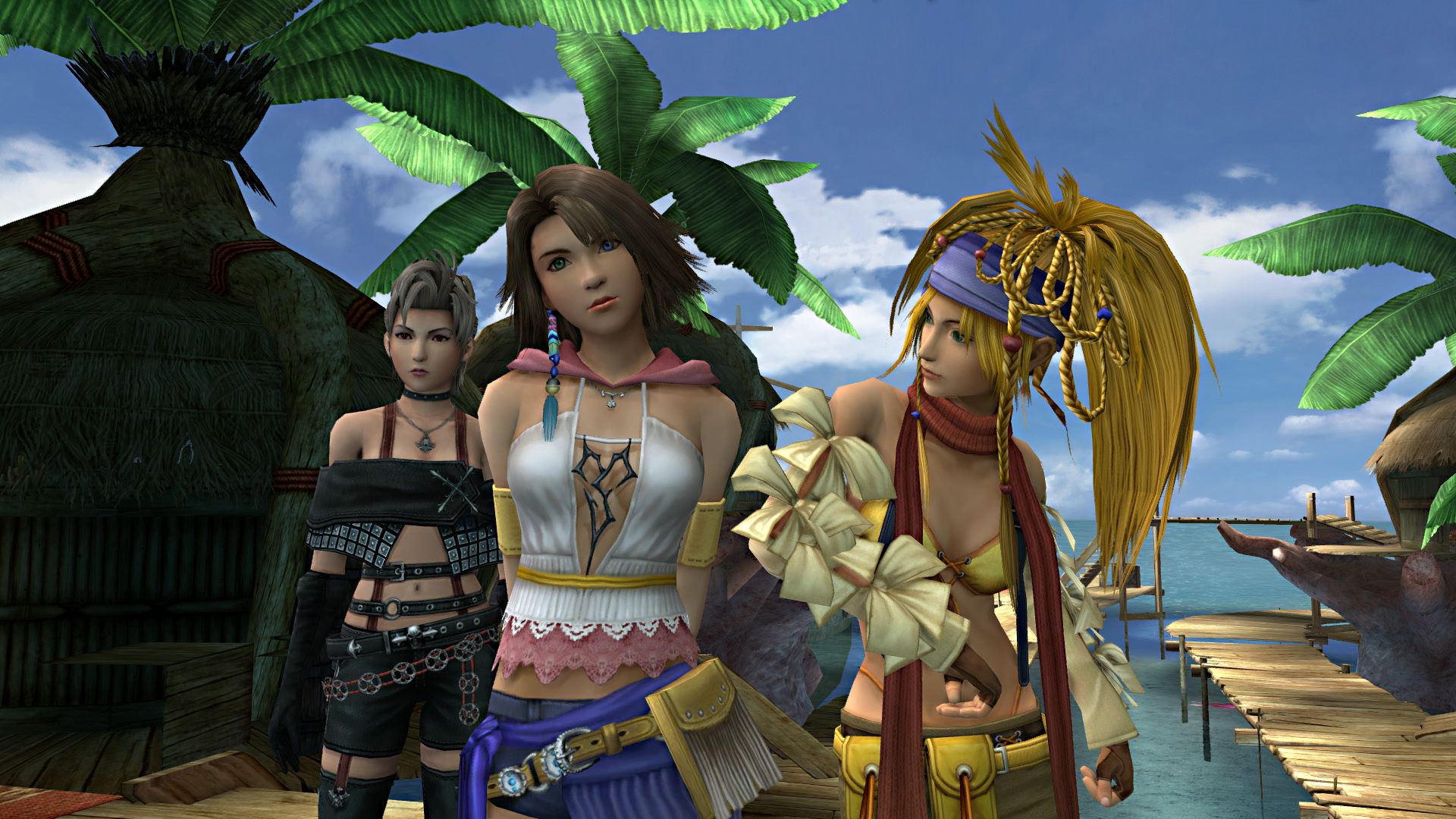 The majority of JRPGs we’ve played, including the iconic classics, could theoretically boil down to this basic formula: A ragtag party of adventurers saves the world from an evil god-tier supervillain and everyone lives happily ever after. This is just like the childhood stories we were told that were rife with “happily ever after” endings. As we grew up, however, we realized the fallacy of the “happily ever after” ending. Once you’ve been in a relationship or two, you realize that “ever after” is a really long time and living happily during that entirety is an impossibility.

That’s when we take the point of view of Schmendrick from The Last Unicorn novel and animated film who says something along the lines of, “There never is a happy ending because nothing ever ends.” Think about it. What happens after you defeat the supervillain and save the world? Is that the end? Is everything instantly made okay? With everything that has happened on the adventure, all the destruction you’ve witnessed, all the imperial powers toppled and evil excised, you are still left with a hurting populace living in a scarred and fractured world that needs to be rebuilt and restored.

Rebuilding is an excruciating process that takes an exorbitant amount of time. If you’ve ever had a broken leg or arm, you know how agonizing it is for the bones to reset and heal. And though you’re “back to normal” at the end of it, are you ever truly the same? Imagine that on a literal global scale. The first JRPG I played that presented the theme of “rebuilding the world you saved” and touched upon the uncertainty and personal toll that takes on people was Final Fantasy X-2.

In Final Fantasy X-2, I could pilot Yuna and company’s airship anywhere in the world of Spira I wanted, though there were always a few “hot spots” where plot-relevant content would happen. However, I often found it more rewarding to visit all the other locations before the hot spots. In the early going, it was enlightening to explore the previously traversed areas from Final Fantasy X and see how a world left devastated in Sin’s wake was recovering from that catastrophe. I was immediately struck by this when I first visited Kilika. It was most certainly not the Kilika I knew in Final Fantasy X, but it was uplifting to see this once-destroyed place rebuilding and bustling again. Just like real-world locations that had to rebuild after powerful hurricanes or tsunamis hit them, post-Sin Kilika will never be the same but will always be Kilika strong.

As the world changes in such profound ways through the rebuilding process, the people face a myriad of hurdles as well — be they physical, psychological, emotional, societal, cultural, political, and everything else between and beyond. A world rebuilding itself is an exciting prospect, but it is also a daunting one when trying to figure out your identity in this realm of uncertainty. Questions such as “Will there be a place for me in this new reality or will I be left behind as something irrelevant” and “Must we bury the old world when rebuilding a new one?” are ever present. There are no easy answers, and in its all-too-brief poignant moments, Final Fantasy X-2 acknowledges that.

In Final Fantasy X, Tidus and company toppled the old power structure. The once mighty Church of Yevon that ruled the world for centuries has now crumbled, leaving the seat of power up for grabs. New factions are poising themselves to lead world reconstruction (which includes establishing societal and cultural leanings) in their desired directions. The big two are New Yevon and the Youth League, who espouse very different ideologies. Spira has not encountered such sociopolitical divides for generations, so this is brand new territory for everyone. Also noticeable is the meteoric rise of the Al-Bhed people. They had been persecuted as heretics for centuries but are finally gaining more acceptance in mainstream society. Of course, it’s optimistic to say that they have what it takes to become the vanguards of a newly evolving global culture. But though the Al-Bhed are better off than they were before, they’re still a marginalized people because old prejudices stoked by longstanding fears die hard and cultural shifts often occur at a glacial pace. Couple all of this social, political, and cultural upheaval with the crushing stress of uncertainty in a recovering world, and even the tightest bonds will be tested.

Ideological divides are also represented by a harsh blitzball trainer named Beclem who now oversees the Besaid Aurochs team. There is a key scene where some Aurochs players bow to Yuna when she visits, and Beclem cuts them down for doing something so meaningless in a new world where summoners are irrelevant since there are no more aeons to summon. Yuna may have saved the world, but Beclem still disrespects her because he sees her as a useless remnant of a bygone era. How hard must that be for Yuna? On the one hand, she’s at a point where she can forge herself a new identity on her terms. But on the other hand, her former identity — the epitome of her existence — saved the world yet is now seen as no longer valid among a significant portion of the population, whose views are represented by Beclem.

Since I’ve brought it up, I’d like to take a detour and discuss Yuna’s identity crisis as she struggles to navigate an ever-changing world. In the old world, she knew who she was and who she had to be, but now she’s trying to find herself in a world struggling to find its own sense of self. Lulu does her best to remind Yuna that she should never forget who she was while figuring out who she will become. It’s probably difficult for Lulu and Wakka to see this once demure summoner now wearing booty shorts, brandishing pistols, and traipsing around like some kind of J-pop idol. But that oddly makes sense to me.

Think about it. Did Yuna even get to have a childhood? In Final Fantasy X, she was thrust with the mantle and heavy responsibilities of a summoner from day one and had to grow up very quickly. To bear the burdens and scrutiny of the world on her shoulders while maintaining a pure and chaste image is an incredibly tall ask for anyone. It was during her awkwardly adorable moments with Tidus (e.g. the infamous laughing scene) where she could stop being a summoner for a moment and simply be a teenage girl goofing around with a cute boy her age.

In Final Fantasy X-2, circumstances give Yuna permission to shed those now arbitrary restrictions, live her life on her terms, push her boundaries, and do the crazy things she never got to do. We’ve all known those peers in college who came from strict households. The moment they caught that first whiff of freedom away from the watchful eyes of mom and dad, they went wild doing every single thing that they were never allowed to do at home, indulging in those longtime forbidden fruits and knowingly making bad decisions simply because they could now. We see that in spectacular fashion among child celebrities, who are under such public scrutiny and restrictive contracts to maintain a squeaky-clean image that they never really get to be children. Hence, they go off the rails when they finally come of age. With all that considered, Yuna’s new look and attitude don’t seem so bad.

The uncertainties of a new reality also play into Final Fantasy X-2’s soundtrack. The music was composed by Noriko Matsueda and Takahito Eguchi, with not a single piece from stalwart series composer Nobuo Uematsu. Matsueda and Eguchi crafted a soundtrack filled with funky, fresh, and very modern sounding pieces that many disliked. I personally liked this oddball soundtrack because it did something different from what was expected in a game about a rebuilding world establishing new norms. These were not the sonic textures typically heard in fantasy JRPGs, and familiar Final Fantasy staples were nowhere to be found. Visiting familiar places like Kilika or Besaid and hearing unfamiliar musical themes for them hammers home the point that this isn’t the Kilika or Besaid we knew in Final Fantasy X, but rather Kilika or Besaid anew.

Final Fantasy X-2 was certainly a polarizing game, but I respect it for at least looking at some themes that I don’t see enough of in JRPGs. Simply defeating the big bad is only half the story. The hard work of actually saving a world left scarred and broken looms ahead, yet we hardly ever witness the difficulty of the reconstruction process. Rebuilding physical structures is one thing, but rebuilding societal and cultural structures while finding your identity during this upheaval is another thing entirely. Final Fantasy X-2 is one of the only JRPGs I’ve played that even touches upon these themes, even if it didn’t delve as deeply into them as it could have. Regardless, I hope that future RPGs pick up on this relatively uncharted thematic territory and explore it further in their narratives.