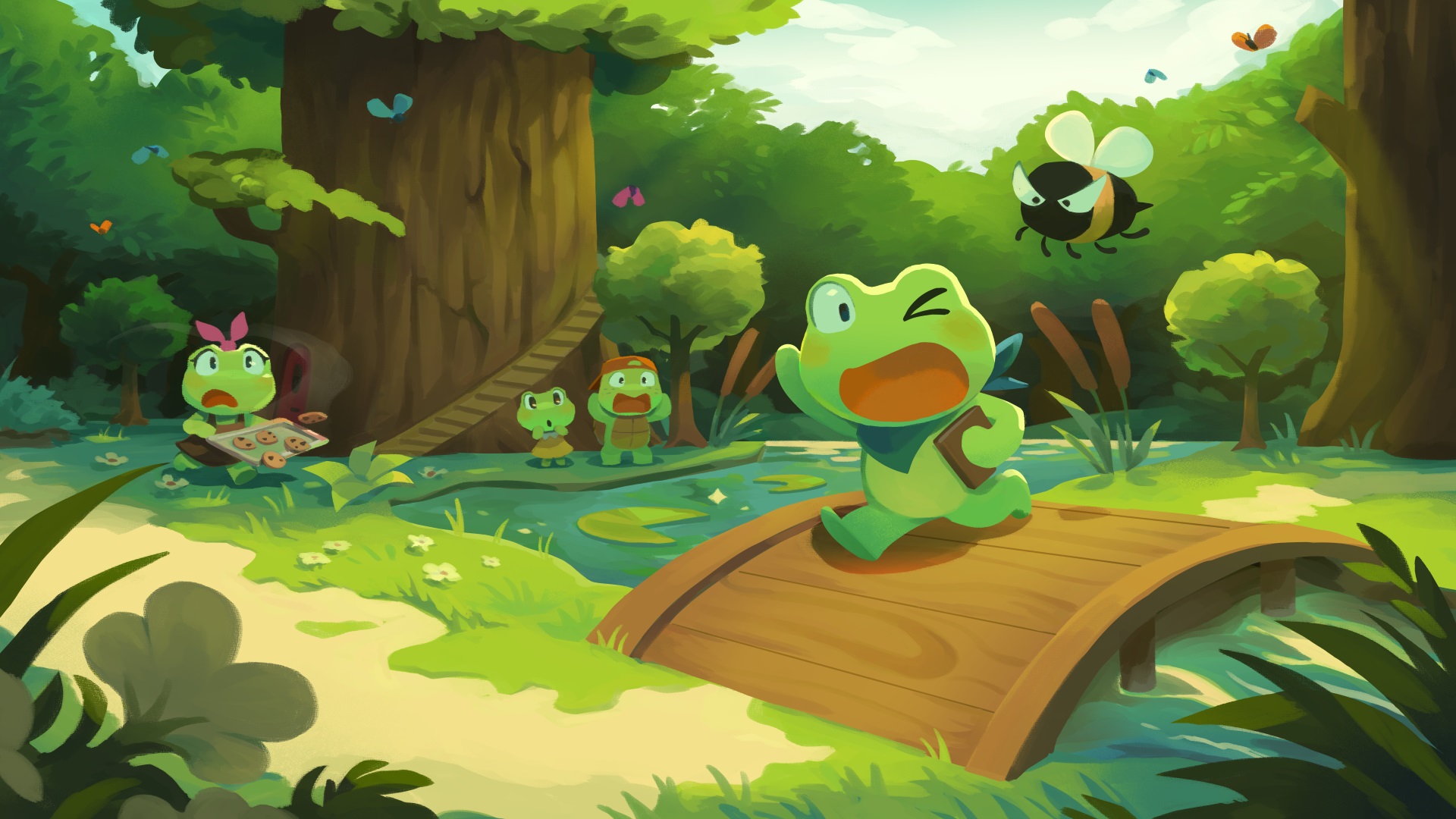 Frogs are fairly decent little creatures, and I think they deserve more time in the spotlight when it comes to video games and other entertainment. Thankfully, 2022’s Wholesome Direct answered our wishes with a glimpse of A Frog’s Tale, a musical RPG set in a pixelated world filled with adorable frogs and other animals. If you liked what you saw (or are new to this froggy adventure), the game’s developers are now raising funds on Kickstarter for a playable demo, with plans to attract investment from other sources after its release.

The game takes place in a colorful world reminiscent of EarthBound, The Legend of Zelda, and the Mario series, with Mario & Luigi: Superstar Saga mentioned as a source of inspiration. Mushroom and acorn houses, giant sunflowers, and a plethora of charming little animals; oh my! Our tale centers around Norman, a frog living in a quaint forest village; as of late, several remarkably angry bugs have been spotted nearby, setting the villagers on edge. One day, while Norman is out researching said bugs, he finds himself carried away by a strange cardinal (a bird, not a religious figure). The cardinal needs Norman’s help for a critical mission: to find pieces of a mysterious artifact with the power to resurrect the dead. Set out on your quest and discover the secrets of both the artifact and Anura, your treasured frog deity! Thankfully, you won’t be alone, as plenty of squee-inducing characters will help you, including a charming bat named Bonnie, a penguin with a plane, and a roguish kitty.

Rhythm plays a major role in both combat and exploration; as you progress through the world, you’ll hop across platforms, avoid traps, and complete puzzles in tune to the beat. A wide variety of mushroom species will help you along the way, turning into platforms or lighting up your surroundings (among other neat effects) when struck by your blade. Expect lots of jumping throughout your journey; you are a frog, after all! The game’s turn-based combat will also feature rhythm elements, with a system inspired by dance games (thankfully, it won’t require you to actually dance. Phew!). Finally, meet adorable NPCs and help them with their life problems to earn new items and unveil more story details; optional, yes, but these critters are too cute to ignore!

A Frog’s Tale initially started as a soundtrack for an imaginary game before being developed into what you see today. The music itself is quite a delightful affair, reminiscent of classic game scores with a more modern touch. In another nod to our old favorites, the game’s pixel graphics are complemented by a lovely animated intro, with perhaps more cinematic cutscenes on the horizon.

A Frog’s Tale reached its funding target early on; the remaining stretch goals will add a playable turtle character, new enemies, and more surprises. For those interested, most pledge levels will include the demo plus the full game once it’s available.

Many of us would agree that the game looks (and sounds) adorable; seeing the characters and world gives me a warm fuzzy feeling that can’t be replicated by staring at the frogs that hang out near my street. For one thing, they don’t go to little frog bars or play the wonderful game of Gorf (aka, frog golf). So disappointing. In any case, if you like your games wholesome and harmonious, I can’t recommend checking out the campaign for A Frog’s Tale enough!