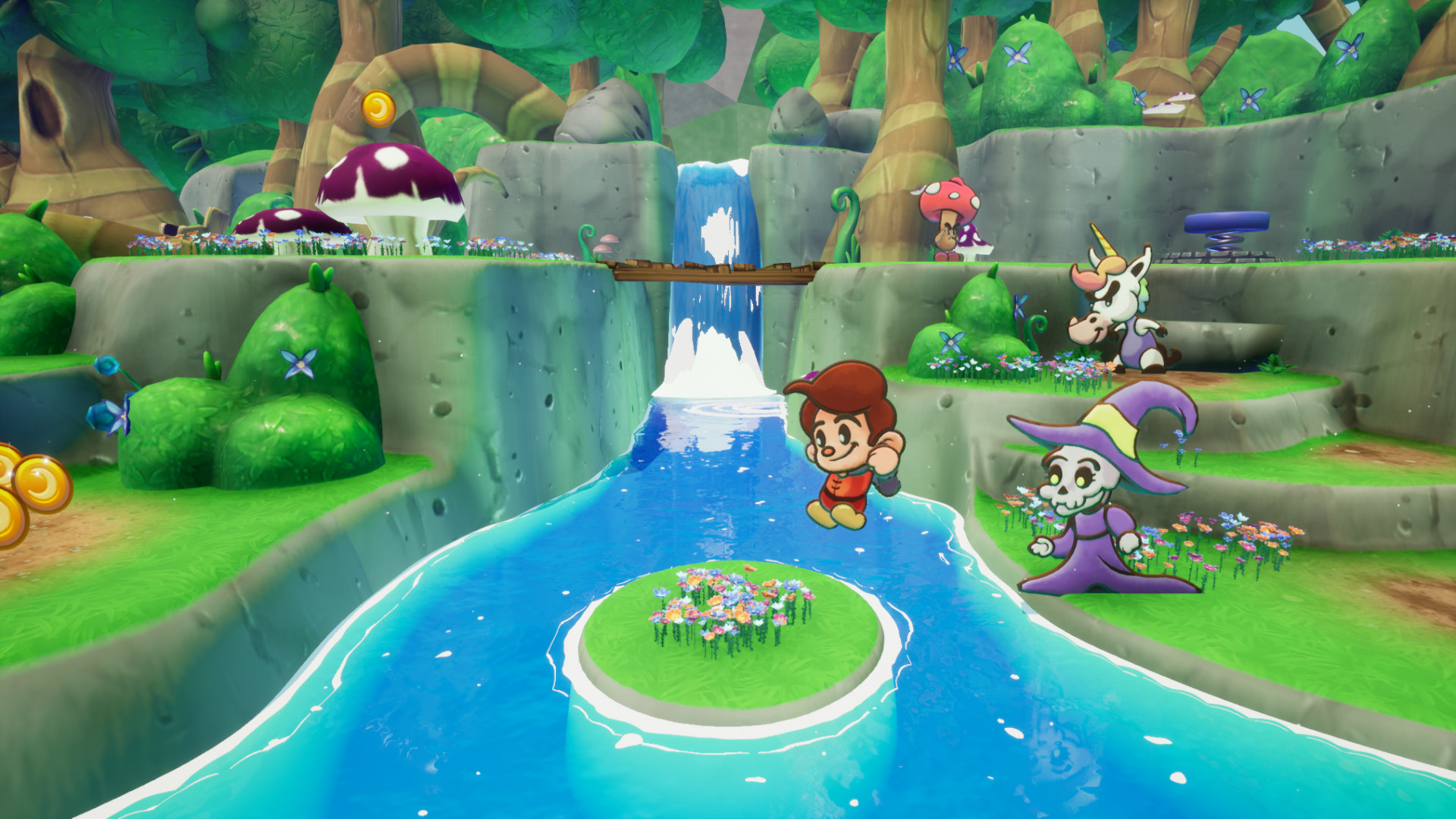 Once upon a time, in a magical RPG realm not unlike the colorful lands of Paper Mario, a brave adventurer known as Flynt Buckler made his way to the Sleepy Castle to fight his long-time nemesis, a sinister dragon named Tinder. Alas, Flynt soon discovered that the castle had become a drab office building, its inhabitants transformed into lethargic employees. As it turns out, an evil corporation known as “Ever After Inc.” decided that taking over storybook worlds would make for a great money-making venture, and had converted the Sleepy Castle into its new base of operations. How deplorable! It’s now your job to take on the role of Flynt Buckler; team up with classic fairytale characters and dive into unique versions of their worlds in a grand quest to bring magic and wonder back to the castle!

Using the former Sleepy Castle as a hub, you’ll jump into fairytale worlds through library books and slowly recover parts of the building as you complete each book. Explore beautiful environments, each with a unique twist on their classic inspirations; expect to see murder mysteries, Lovecraft-inspired creatures, and sci-fi technology make their way into beloved tales!

Flynt Buckler’s combat and exploration follow in the tradition of Paper Mario, with turn-based battles emphasizing timed attacks, and an overworld filled with action, puzzles, and secrets. Team up with a charming array of fairytale characters, including a musically inclined Big Bad Wolf, and your former draconic nemesis in a miniature format. Your new friends each have special environmental skills to help you explore and uncover more secrets, and they’ll be more than happy to lend a hand (or paw) during combat. Meanwhile, badges will grant you new and exciting attack moves, and special costumes (including what appears to be a mouse-eared construction worker’s uniform) will bestow you with beneficial bonuses. Kickstarter backers can even get two exclusive outfits: most pledge levels include a set of Golden Knight Armor, with higher tiers also awarding the King’s Robes and Crown.

Not to go unmentioned is the game’s music, brought to you by composer Daniel Whitworth. The fun and energetic big-band-style tunes will have you hopping along in no time; be sure to check out the samples on the campaign page, and pledge to the Hero tier or higher for your own digital copy of the soundtrack!

Flynt Buckler reached its initial campaign target early on; remaining stretch goals include the addition of world-specific battle themes, an achievement system, and more to come. So far, the game looks fabulous; beyond Paper Mario, the story and visuals bring to mind Cuphead and the 1994 animated movie The Pagemaster. Let’s check out the Sleepy Castle’s library and see where its magical volumes take us!